Veterinary students who used sheep to hide their modesty for a charity calendar were at the centre of a bizarre row last night after they came under attack from vegans.

For years, final year students at the Royal Veterinary College in London have created a charity fundraising calendar.

But this year, in one of the images, featuring naked male vets ‘tipping’ sheep – a ‘pain-free’ method used to examine the animals’ feet.

The image led to ‘obscene personal threats’ on social media – and the RVC’s principal ordering that the calendar be banned.

The RVC published an open letter following a bizarre row over the annual nude calendar.

‘We have taken action to explain to our students why this behaviour is inappropriate and have asked them to remove the calendar and its photographs from distribution with immediate effect.’

The RVC students’ union hit back, alleging that the college’s senior management had ‘failed [in] their duty of care’ to students, ‘as their statement has given credence to the negative response from a minority group online who now feel emboldened to target individual students with personal threats’.

Students also described how they had suffered ‘personal attacks and harassment…simply for being associated with the calendar’, the Veterinary Record reported.

One Twitter user attacking the picture said: ‘Vets are supposed to care for and save animals….not abuse them for a photo opportunity.’ The British Cattle Veterinary Association (BCVA) defended the students. 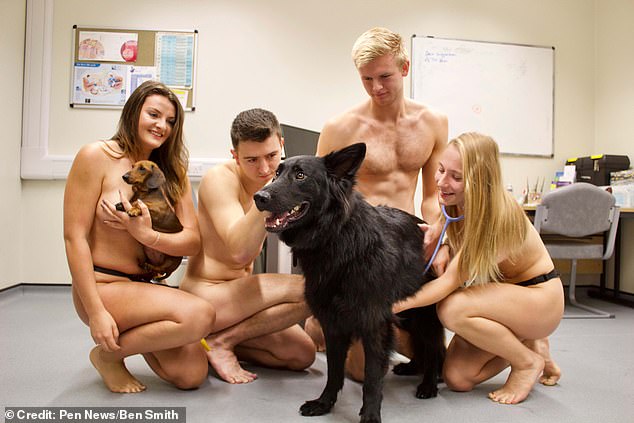 BCVA stated: ‘In the image in question, the vet students are demonstrating a standard handling mechanism in animal husbandry – that of tipping a sheep to allow examination of their feet and other areas which would not be examinable in a standing sheep.

‘This is widely recognised as being safe and pain free for the animals. As such, the BCVA feel that singling this image and these students out for attention is grossly unfair. Some of the vitriol spread in their direction from members of the same profession…is both grossly unfair, unfounded and should be condemned.

‘Further, we feel that the RVC have a role in supporting these students, rather than their statement released which appears to condemn their actions. Such an institute should be making their decision on evidence rather than a small, vocal social media thread.’

The BCVA added: ‘The image in question has been singled out by a group called ‘The Vegan Vet Network’, presumably as it uses farm animals in the imagery, as opposed to a multitude of other images involving companion animals – ‘Firemen with cats’ appears to be one which has escaped criticism.’

The RVC said it would seek to ‘learn lessons about shared values, timely communication, standing by our students and the need to understand a changing world’.

‘We will work together to ensure these events do not happen again’.

The RVC added: ‘No student is being blamed, individually or collectively, and we will work together to ensure these events do not happen again.’