Shocking images have revealed how much pugs have changed over the years as a result of cruel inbreeding for fashion.

Pugs’ flat faces, curly tails and big eyes did not evolve naturally, and instead are the result of selective breeding.

Their squashed facial structure puts them at high risk for a range of health conditions, including breathing, eye and skin disorders, according to a new study this week.

‘The extreme characteristics many owners find so appealing, such as squashed faces, big eyes and curly tails, are seriously compromising pugs’ health and welfare and often result in a lifetime of suffering,’ explained Justine Shotton, British Veterinary Association (BVA) President.

‘While these extreme, unhealthy characteristics remain, we will continue to strongly recommend potential owners do not buy brachycephalic breeds such as pugs.’

Shocking images have revealed how much pugs have changed over the years as a result of cruel inbreeding for fashion. Pugs’ flat faces, curly tails and big eyes did not evolve naturally, and instead are the result of selective breeding.

Which conditions are pugs at high risk for?

Pugs are an ancient breed of dog, with roots dating back to around 400 BC.

Most historians agree that the breed originated in China, where they were bred as companion animals for the wealthy.

The pug’s popularity spread from China to Japan and Russia and ultimately to Europe, where they quickly ensconced themselves in royal palaces and the homes of the upper class.

However, they’ve been bred over time to have shorter legs, flatter noses, curly tails and a stockier build.

‘Most dog breeds were originally selected for particular purposes, such as hunting or guarding property,’ the RSPCA explains.

‘Humans selectively bred dogs that were best suited for the various roles required of them, based on their fitness, ability and utility.

‘Nowadays, in order to win dog shows, pedigree dogs have been bred to emphasise certain physical features in accordance with breed standards set by the Kennel Club. The dog who is judged to most closely match its breed standard is awarded the winner.

While pugs’ squashed faces are often perceived as ‘cute’, they can result in a huge range of severe health issues.

Speaking to MailOnline, Becky Thwaites, Head of Public Affairs at national pet charity Blue Cross said: ‘Sadly overbreeding to meet demand for flat faced breeds such as pugs, French bulldogs and Persian cats, which are seen as fashionable and cute, can result in these pets suffering from a range of health issues including breathing problems, eye disease, skin disease, heart conditions, spinal abnormalities and joint disease.’

Gerard Butler, Paris Hilton and YouTuber Zoe Sugg are just a few of the famous faces who have shared their lives with the breed.

But in a study published this week, researchers from the Royal Veterinary College compared the risks of 40 common conditions in pugs with other dog breeds, and found that pugs were at increased risk for 23. 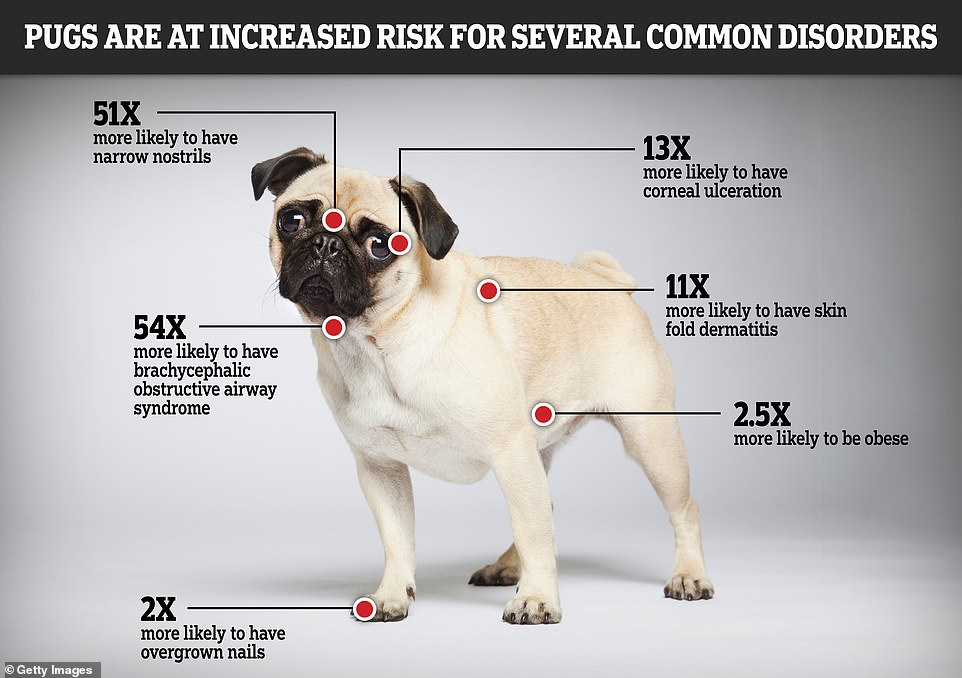 Pugs are significantly more likely to suffer from breathing, eye, and skin disorders than other breeds, according to vets from the Royal Veterinary College 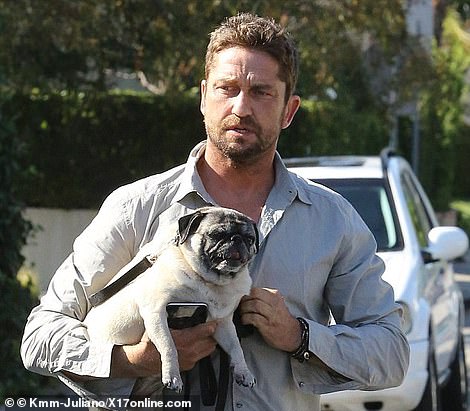 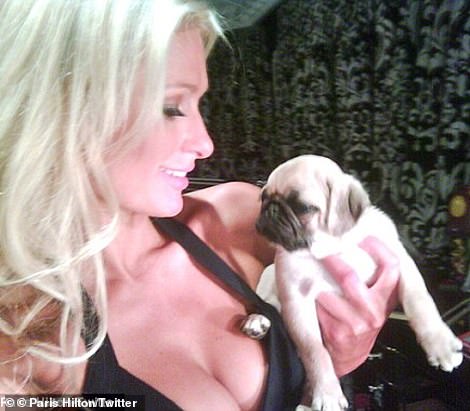 Gerard Butler, Paris Hilton and YouTuber Zoe Sugg are just a few of the famous faces who have shared their lives with the breed 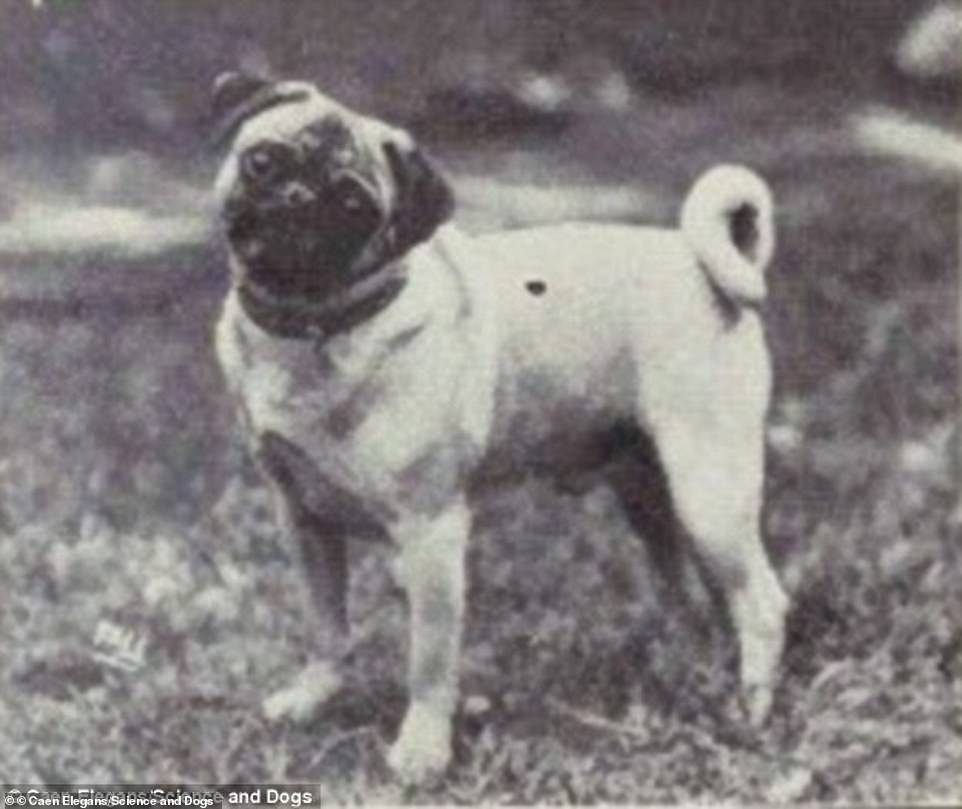 Originally, pugs had long legs, longer noses, straight tails and a slim build. However, they’ve been bred over time to have shorter legs, flatter noses, curly tails and a stockier build

Additionally, pugs were found to be 2.5 times more likely to suffer from obesity, and twice as likely to have overgrown nails.

Dr Dan O’Neill, who led the study, said: ‘Although hugely popular as pets, we now know that that several severe health issues are linked to the extreme body shape of Pugs that many humans find so cute.’

Pugs also have a very short life expectancy of just 7.4 years – considerably shorter than the average life expectancies across all breeds, of 11.2 years.

Based on the findings, vets are urging people not to buy pugs until stricter breeding standards are in place.

Jaya Sahota, a veterinary student at the Royal Veterinary College, said: ‘Widespread ownership of Pugs with extreme facial and body conformations should be discouraged until measures are in place to ensure stricter and more acceptable breed standards.’

The history of the pug 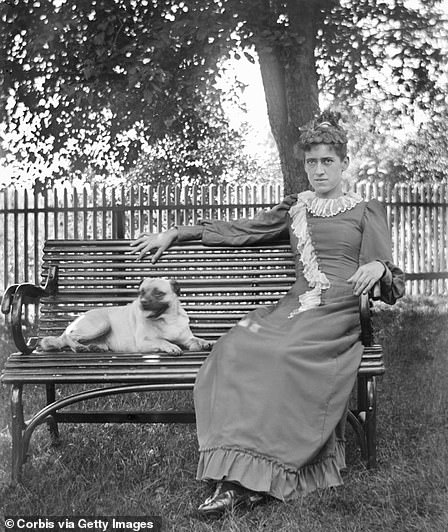 Pugs are an ancient breed of dog, with roots dating back to 400 B.C.

Most historians agree that the breed originated in China, where they were bred as companion animals for the wealthy.

With their people-pleasing nature and adaptability, Pugs made a name for themselves as ideal lapdogs and companions.

They kept Tibetan Buddhist monks company in their monasteries and received royal treatment as companions to Chinese emperors and their families, who valued them so much they even kept guards and servants to protect and care for them.

Three types of flat-faced dogs were bred by the Chinese: The Lion dog, the Pekingese, and the ‘Lo-sze,’ also known as the ancient Pug.

The Pug’s popularity spread from China to Japan and Russia and ultimately to Europe, where they quickly ensconced themselves in royal palaces and the homes of the upper class.

Their small size, sturdy frame, and minimal exercise requirements made them ideally suited as a household pet.

Worryingly, many people seem to be unaware of the potential issues that pugs face, according to Bill Lambert, Health, Welfare and Breeder Services Executive at The Kennel Club.

‘We, alongside vets, welfare organisations and breed clubs, continue to work collaboratively to educate the general public, many of whom simply don’t seem to be aware of the potential issues that some of these dogs face,’ he said.

The Kennel Club says that much can be done to protect pugs, including educating the public and curbing ‘rogue breeders.’

‘We aim to curb the increasing numbers of rogue breeders, who are outside of any sphere of influence and are producing dogs with no regard for welfare and continue to urge would-be owners and breeders to think carefully about any breeding or buying decisions when it comes to Pugs, and make use of health testing, evidence-based resources and expert advice available on The Kennel Club website,’ Mr Lambert explained.

Ms Cross added: ‘We never want anyone to feel blamed or shamed for sharing their lives with one of these pets – but we as a society must start doing what is best for the welfare of our four-legged friends.’

How man has changed his best friend: Pictures show how 100 years of breeding has changed dog breeds

The Bull Terrier was first created in the early 1800s with the mix of the old English Terrier and the Bulldog, reports Pet360.

During this time, dog fighting was a big source of entertainment in Europe and people were always trying to breed dogs into better fighters.

Prior to being a stocky fighter, Bull Terriers had a slim curved body and a more chiseled nose, reports Science and Dogs.

Over the years, the animals mutated to have a warped skull and thicker abdomen, and it also gained a compulsive tail-chasing trait.

The Basset Hound’s short, curved legs are a result of an extra copy of a specific gene, which produces growth protein.

Prior to human interruption, this dog had shorter ears, a less droopy face and a curve in its back.

Today their bellies are much lower to the ground and their rear legs have also seemed to lower with excessive skin with larger floppy ears.

Boxers are successors of the extinct bullenbaiser breeds, which was a cross of mastiff, bulldog and, some suggest, a Great Dane and terrier.

Developed in 19th century Germany, these dogs were designed as bull baiting dogs and later as butcher’s helpers – controlling the cattle in slaughterhouses.

Before being turned into working dogs, the boxer had a longer face and longer downward tail.

Today’s Boxer has a shorter face with a larger mouth that slightly points upwards, which has been known to host numerous problems.

The Dachshund once had more functioning legs and a neck more proportion to its size.

But thanks to humans, their backs and necks have stretched out and their legs have shrunk to a point that makes it difficult for them to maneuver over obstacles a few inches off of the ground.

These dogs are known to have the highest risk of any breed for intervertebral disc disease which can result in paralysis.

The German Shepherd is also a result of too much breeding that ruined a canine species.

First attempts to standardize this breed began in the 1850s, with the goal of preserving traits that helped the dogs with their job of sheep herding.

They improved the dog’s intelligence, speed, strength and keen sense of smell, which resulted in dogs of the same breed that differed from each other.

In Dogs of All Nations, the German Shepherd is described as a medium-sized dog (25 kg /55 lb), which is far from the angulated, barrel-chested, sloping back,ataxic, 85-pounds (38 kg) we are used to seeing in the conformation ring.

The original German shepherd had a thinner abdomen and stance was sharper than the one we know today.

The Saint Bernard are most likely decedents of the mastiff style Asiatic dogs used by Roman soldiers.

These canines were used in the Alps as rescue dogs at the monastery and hospice founded by Bernard de Menthon the 11th century.

The St. Bernard came very close to extinction at the hospice and some suggest the monks crossed the remaining dogs with Great Danes and English Mastiffs.

Compared to their ancestors, modern St. Bernard’s have broader skulls with a steeper angle between the nose and foreheads.

The dog is also much larger than its early ancestors with a squished in face and longer fur.

The English bulldog is said to be the most changed dog from its ancestors, as it has endured so much breeding that it suffers from almost every disease possible.

The original Bulldog was bread for bull baiting, vicious and cruel dog fighting, and some experts say there has probably been more attention to creating the perfect Bulldog, than has been for any other breed in history.

It was also athletic with a smaller head and less skin hanging on its body, but most dogs bread for bull baiting eventually developed stocky bodies and enormous heads and jaws – the Bulldog was no different.

Today these creatures cannot perform the rigorous activities they were first created to day and actually have a hard time just moving around.