Viagra to be sold over-the-counter from TODAY

Viagra will be sold over-the-counter in the UK from today for less than £5 a pill, its manufacturer has announced.

The landmark move comes after health officials reclassified the little blue pill that ‘helps you get and keep an erection’ last year.

Viagra Connect will be available to men with erectile difficulties in Boots before it is rolled out to other pharmacies in two weeks.

A four-tablet pack will cost £19.99 while men can get hold of eight tablets for £34.99, providing they meet strict medical criteria.

Manufacturer Pfizer said Viagra Connect is the first pharmacy medicine for erectile dysfunction to be made available without prescription.

Figures suggest erectile problems affect up to one in five men – the equivalent of 4.3 million men across the UK.

However, many do not seek medical help for their condition because thousands feel uncomfortable and embarrassed discussing their issues with a GP.

Viagra was developed in 1998 by accident, after scientists discovered it had benefits for sufferers of erectile dysfunction.

Manufactured by Pfizer, the magic blue pills are taken by more than one million men in Britain each year, figures suggest.

Most users are in their early to mid 50s, but younger people are starting to take the drugs more often, the pharmaceutical previously said.

But since its patent expired, rivals have made generic versions containing the same active ingredient, priced at around £1.45 for the same amount of capsules.

Celebrities such as Hugh Hefner, the founder of Playboy magazine, and Hollywood actors Ben Affleck and Ashton Kutcher have previously admitted using Viagra.

‘It’s important to remember that erectile dysfunction is a medical condition, and that the impact often goes beyond the physical symptoms – it can lead to men feeling anxious, depressed and lacking in confidence.

‘Our hope is that the availability of Viagra Connect in pharmacies will encourage men who do nothing about their erectile dysfunction to seek help, and encourage those who are inclined to seek help to do so sooner.’

Men will be able to purchase Viagra Connect, 50mg film-coated sildenafil pills, in pharmacies and online after they answer a series of medical questions.

Pharmacists will determine whether the drug is appropriate for the patient and can give them further advice on erectile dysfunction.

Some men, including those with severe heart problems, liver failure, kidney failure or those taking ‘interacting medicines’ will still require a prescription.

IT WAS SUPPOSED TO BE A HEART PILL 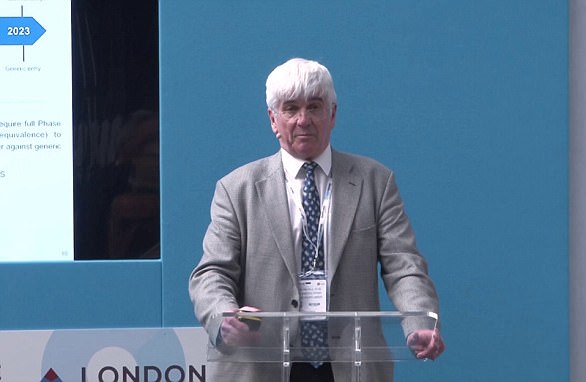 Dr Mike Wyllie was head of biology at the pharmaceutical company Pfizer during the development and launch of Viagra in the 1990s. He is still a consultant for the firm today

Research scientist Dr Mike Wyllie was head of biology at the pharmaceutical company Pfizer during the development and launch of Viagra in the 1990s. He is still a consultant for the firm today.

He says: ‘Viagra – as it’s used in its current form – was an accidental discovery. The drug was originally designed to help angina but an unexpected side effect was that the men trailing it were getting erections.

‘As well as dilating their coronary blood vessels, as expected, the drug was acting on the blood vessels in the penis.

‘And Viagra very nearly didn’t happen at all. In fact it was very nearly shelved for being morally wrong: there were concerns over “selling sex”. And very few people thought there was a market for it.

‘Back in the early 1990s, erectile dysfunction, or impotence, as it was more commonly known, was not considered a problem. Or certainly not one that was ever talked about.

‘And the vast majority of people thought it was “all in the mind”. GPs said patients didn’t mention it, but then they also never asked about it, not like today.

‘Viagra’s biggest achievement in the past 20 years has been to put the very embarrassing, but very widespread problem of erectile dysfunction on the map, and that can only be a good thing.’

Officials at the Government run agency hope the move will help steer people away from buying drugs from websites operating illegally.

The MHRA have repeatedly warned ED medicines are a ‘popular target’ for criminals selling unlicensed and counterfeit medicines.

Over the past five years the agency has seized more than £50 million of unlicensed and counterfeit impotency medicines.

It comes days after MailOnline reported on new guidelines that said doctors should quiz men who struggle to get an erection if they are actually gay.

Some 100,000 Britons are estimated to be ‘wrestling’ with their sexuality – which is causing them to fail to rise to the occasion and perform when it matters.

A new 28-page report, by the British Society for Sexual Medicine, was dished out to GPs to ask them about their sexual orientation.

But the move received backlash from the Royal College of GPs, which warned it is ‘difficult’ to see why doctors need to ask if their patients are gay.