A vicar has banned the rousing Onward Christian Soldiers hymn from a Remembrance Sunday service ‘in case it offends non-Christians’.

Furious members of a Royal British Legion club are now planning to boycott the service at St Peter’s Church in Oadby, Leicestershire after the Reverend Steve Bailey banned the hymn.

Participants march into the church to the traditional hymn at the end of the service every year.

Furious members of a Royal British Legion club are planning to boycott the service at St Peter’s Church in Oadby, Leicestershire. Pictured, Ian Thorpe, vice-chairman of the legion club

But RBL members claim this year the vicar vetoed the hymn because people at the service would not necessarily be Christian.

Ian Thorpe, vice-chairman of the legion club, which is across the road from the church, said: ‘The new vicar is not happy with Onward Christian Soldiers being sung.

‘It’s been done nearly every year in recent memory but he said they’re not doing it because not everyone at the service will be Christians – it’s not the ‘soldiers’ bit, it’s the ‘Christian’ bit.

‘He’s going to have the hymn All People That on Earth Do Dwell instead.’

He said the club’s chairman, Pete Green, was planning to boycott the service and just lay a wreath, and others in the congregation were considering staying outside the church and may sing the hymn by themselves.

He said: ‘One family, who go to the church, have said they’re going to stand outside the church and sing it.

‘Our chairman of the club, Pete, who is also a member of the branch committee, is thinking about not going into the church and just laying a wreath.

‘The majority of those of us in the legion are not happy with it.’ 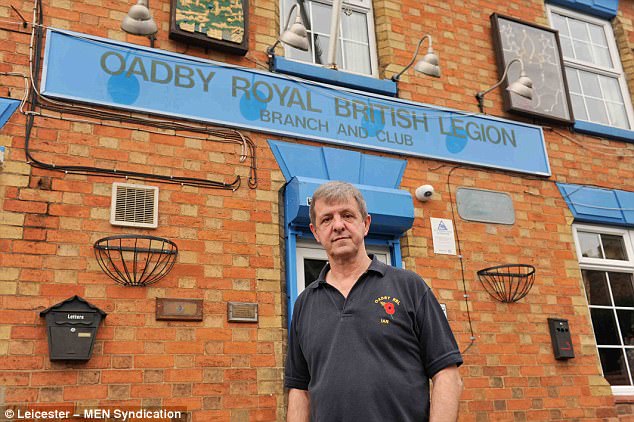 Mr Thorpe said the club’s chairman was planning to boycott the service and just lay a wreath, and others in the congregation were considering staying outside and may sing the hymn by themselves

It is not the first time the hymn has been the subject of controversy at the church.

In 2012 another newly appointed vicar decided the hymn should not be sung at the Remembrance Service.

Mr Thorpe said: ‘There were lots of complaints and it was back the next year.’

The Oadby Royal British Legion branch – which is a separate body from the club – has met with the vicar and agreed to Rev Bailey’s request to not sing the song this year but Ian said he understood the branch would want to review the change for next year, based on the response from the congregation.

The Oadby parade on the afternoon of Sunday, November 12 will involve hundreds of people including standard bearers from various soldiers groups around the county.