Vicar protesting against Star Wars showing on the Sabbath

A vicar has failed in his mission to stop Star Wars becoming the first film to be shown on a Sunday in a public cinema on the Isle of Lewis.

Star Wars: Episode VIII – The Last Jedi was shown at the An Lanntair arts centre in the town of Stornoway, Scotland today.

All 183 tickets for the movie were snapped up within days despite church protests, led by the Rev. David Fraser of the Free Church of Scotland, urging people to keep the Sabbath day holy.

Two sign-carrying protesters reminded cinema-goers to keep the Lord’s Day holy as they held a silent vigil at the entrance to An Lanntair, which holds the Isle of Lewis’s only public cinema.

It opened today on the last Sunday of the month and will be the first movie in a trial period that will run until March.

One of the protesters, the Rev. David Fraser, held a sign that said ‘repent and be converted that your sins may be blotted out.’

The 78-year-old said: ‘This is a serious breach of God’s law.

‘The Sabbath is to be kept holy – people are forgetting about higher things and going against the the Christian tradition of our island heritage and culture.

‘There should be freedom of choice within the limits of respect of the religion and culture here. We are making our convictions clear – we are not trying to block people going in, but making clear what we believe in and that they should be seeking their own salvation and God’s ways. Spending Sunday in a cinema is not God’s way.’

Another woman protester refused to comment but held a sign saying ‘remember the Sabbath day to keep it holy.’

David Green, the chairman of the board of An Lanntair, defended the decision to open and said no staff had been made to work on a Sunday. 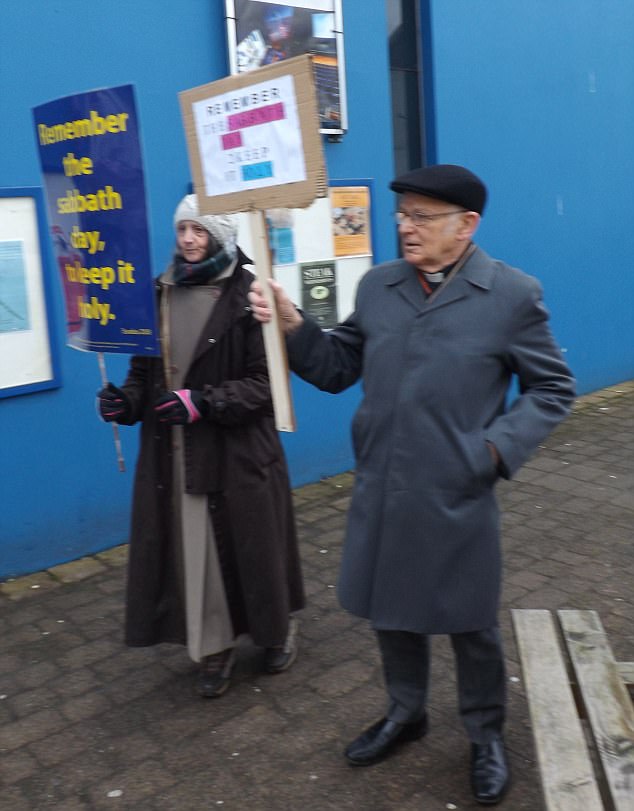 He added that it had not deliberately booked Star Wars to guarantee a Sunday sell out – it was simply the film the distributors had made available within their showing cycle.

Next month’s Sunday film, Coco, is already more than half sold out.

‘We have not set this up as a way to get lots of people in on a Sunday. I fully understand the Sabbath issue but I also understand it is not up to us to impose one view on another. We are committed to diversity,’ he said.

‘No group can impose on any other group what they can do and what they cannot do. We have been really careful to do this in the least disruptive or offensive way. It is about a quite afternoon for families. How we continue, and if we continue, with this will be decided at the end of the trial.

‘The only regret I have is that some members of staff have been put under pressure over this – some have family members who have objections for cultural or religious reasons. But no member of staff has been forced to work on a Sunday.’

‘I think it’s fantastic. If people don’t want to go to church they should be allowed to go to the cinema. I think quite a lot of people to want this to happen,’ he said.

‘Nobody is going to stop people observing the Sabbath. I cannot understand why people cannot accept choice – live and let live, I say. Religion is important to the history and heritage of the island, but nobody is standing outside the churches saying you can’t come in – that would be disgraceful.’ 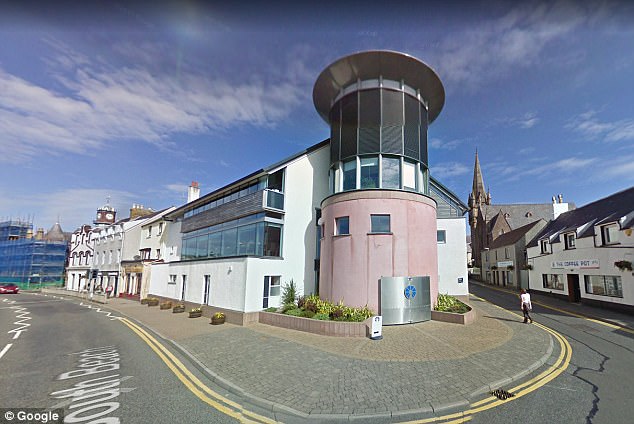 Mother-of-two Charlotte Groundsell, 41, added: ‘This is giving people a choice to do something on a Sunday and I have come to show my support. When I inquired about tickets they had all gone – and quickly. But I am still going to use the venue in other ways today.’

Elly Fletcher, chief executive of An Lanntair, said she had had ‘less than 10’ unsolicited letters and emails from people about the trial – which were split evenly for and against.

She said: ‘What we are doing is a genuine audience research exercise and not at all trying to challenge, or go against, local traditions.

Teas and coffees will be available for sale at the centre during the trial, but the venue’s bar and restaurant will remain closed.

The centre is right opposite Martin’s Memorial Church of Scotland and worshippers poured out as cinema goers entered An Lanntair.

But following board meeting it was then decided that for operational reasons a trial was not possible at the time.

Star Wars: Episode VIII – The Last Jedi became the first movie to be shown in a public cinema on a Sunday on the Isle of Lewis

Leisure facilities on the island have traditionally closed on Sundays in observance of the Sabbath.

Campaigners have even raised enough money to open Lewis’s public swimming pool and sports centre for a trial period on Sundays – only to be refused by the Western Isles Council.

The local authority said its decision not to open the site was for ‘operational reasons’ and not a religious one.

Local authority-run leisure centres on Lewis and neighbouring Harris are closed, although similar sites elsewhere in the Western Isles are open on Sundays.

Recently a survey overwhelmingly backed allowing golf to be played on Sundays at Stornoway. 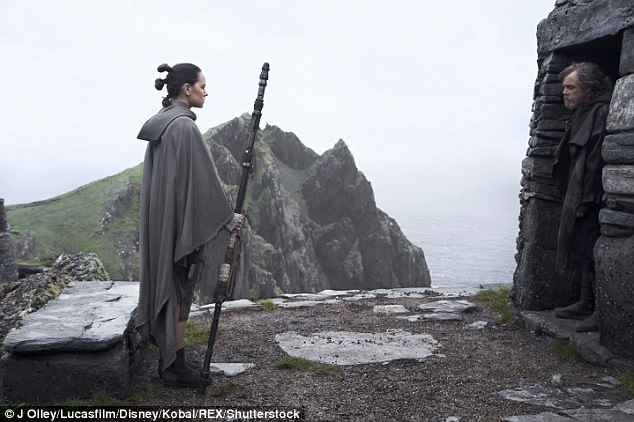 The screening was popular with cinema-goers, with one saying: ‘I think it’s fantastic. If people don’t want to go to church they should be allowed to go to the cinema’

Teeing off on Sundays is banned at the Stornoway Golf Club under a historic clause in the lease with community landlord, the Stornoway Trust.

Since the course was built about 65 years ago golf has never been played, reflecting the historic local island values of observing the Sabbath.

But Callum Ian Macmillan – an elected member of the trust – set up an online survey in a bid to gauge people views.

He says times have changed and islanders have a less strict outlook on Sunday activities.

The question ‘should all sport taking place in the Castle Grounds be treated in the same way by the Stornoway Trust?’ was answered by over 740 people in an online survey open for only four days.

More than 75% of responses were in favour of all sports being given the same standing in Lews Castle Grounds.

The first Sabbath-busting ferry to Lewis came eight years ago, amid fierce protests. It has proved so popular that there will be two services on a Sunday for seven months this year.

An inter-island ferry between Harris and Berneray operates on Sundays after being introduced amid fierce protests in 2006. Sunday flights to and from Stornoway have operated since 2002.

However supermarkets in Stornoway remain closed on Sundays. Hotels, some restaurants and pubs and a filling station are open.

A businesswoman on Lewis is continuing to defy Sabbatarians and open her shop.

Leona Rawlinson, who runs Tweed Tastic in Stornoway, was sent a bible and a letter from The Lord’s Day Observance Society, Lewis and Harris branch asking for her to not open on Sundays.