Vicious muggers beat up amateur boxer, 13, for his clothes

Patrick Ward was dragged along the road and repeatedly kicked before being forced to hand over his red Armani body warmer, Gucci belt and Nike trainers.

The keen amateur boxer suffered scratches and burn marks on his hip following the attack near his home in Wythenshawe, Manchester.

Police have now launched an investigation and his furious mother Collette said: ‘I’m just disgusted that grown men could do this to a boy. They are the lowest of the low.’

Before the incident the teenager was walking with his friend Riley Windsor, 14, when a man in parked van, said to be aged about 40, asked him to ‘come here’.

When Patrick told him to ‘f*** off’, two younger men jumped from the van and ran after the fleeing friends, eventually catching up with them on a nearby industrial estate.

Collette, a mother-of-seven, said: ‘My son ran for his life. He got caught first and the man said ‘don’t talk to my dad like that’ and then got him round the neck.

‘He tried to strangle him and battered him. He got him on the floor and kicked him in the head, and then dragged him by the scruff of the neck up the road back to his dad in the van.

‘My son was crying and screaming. There was a big group of three or four other men waiting at the van and they told him to get his clothes off.’

But when a passing mother pushing a pram started ‘screaming’ at the men, the two boys managed to get free and run home, according to the youngster’s mother.

She added: ‘When he got home he was shocked. He was very, very shaky and crying. One side of his face was red. He was scratched and his hair was messed up. And he had no shoes on.’ 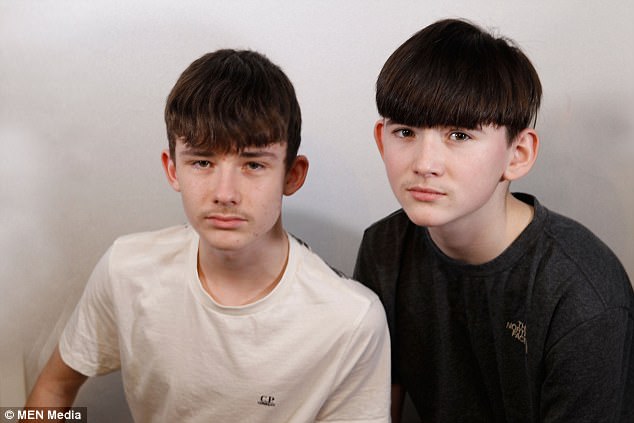 Patrick (right) and his friend Riley Windsor, 14, (left) both tried to run away from the men who jumped out of the van

Patrick, who is home schooled by his mother, thanfully did not require hospital treatment.

She said: ‘He’s alright. He’s still shaken up. His pride is hurt. He’s a teenager. But he was attacked by a big group of men. I’ve got so much anger inside me. I’m so annoyed.’

Patrick had used his Christmas money to buy the Armani body warmer, a cream-coloured Gucci belt and Nike Air Force 1 trainers from Selfridges.

His friend Riley, a St Paul’s Catholic High School pupil, was forced to hand over his own Nike Air Force 1 trainers after being slapped and punched in the face.

His mother Caroline Jackson, 41, who has three other children, said: ‘It’s absolutely disgraceful that five grown men can attack young boys for no reason.’

A spokeswoman for Greater Manchester Police confirmed officers were called to reports of assault and robbery on Moor Road at the junction of Wythenshawe Road and said it is being investigated.