The woman who was racially attacked by two females while on a train this week said the abuse continued right up until the commuters got off at their stop.

The 66-year-old had been an Australian resident since 1985, but that didn’t stop the attackers telling her to ‘go back to your own country’.

She said the confrontation started after she asked one of the girls to stop looking at her when she began ‘coughing from time to time’, news.com.au reported.

‘The girl, she keeps staring at me. After a while I asked her to stop looking at me and that’s when the other girl started yelling,’ Mila said.

‘What are you going to do? Go back to your own f***ing country… F**k you too, you motherf***ing curry muncher.’

Mila attempted to calm the situation and said: ‘I don’t know you, you don’t know me.’

Shocking video has emerged a young woman launching a vile, racist attack on a commuter sitting alone on a busy Melbourne train

‘It’s my country, it’s not your f***ing country,’ the blonde woman responds.

The abuse continued as three women pressed the emergency button and moved down the carriage to come to Mila’s aid.

‘I couldn’t believe their mouths. It’s never happened to me before and I’ve been commuting for a while. It went for a long time, and it only stopped when they got off.’

The victim recalled the girls getting off the train at Highett in the city’s southeast, where they ran away from Protective Safety Officers.

She got off the train herself at Flinders Street station and spoke with Metro Trains staff who contacted the police, but they have not yet got in touch with her.

Mila, who was a recovering cancer patient, wanted to send a clear message to the girls who racially attacked her. 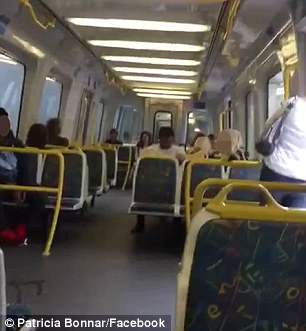 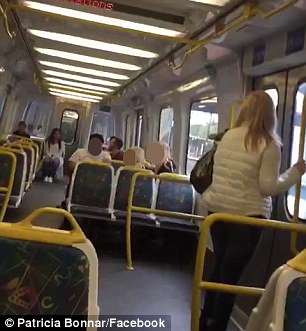 ‘I’m not worried about seeing them again. I just want them to know they can’t act like that. They have to stop doing it. That behaviour is disgusting.’

The woman who posted the video to social media described the behaviour of the two blonde girls as ‘disgusting’.

‘They racially abused a lady sitting on her own. [We] pressed the emergency button and sat beside the lady to support her until these girls got off the train.’

The group were praised online for supporting the victim, with one writing: ‘Well done ladies, so glad you didn’t just stand by.’