A young woman who was shot and killed during an attack at a Tennessee Waffle House died singing a gospel song, the restaurant’s CEO said on Saturday.

Walt Ehmer recounted during the funeral service for 21-year-old DeEbony Groves  what one survivor told him happened during the morning of the attack.

‘We went and visited with the survivors, and they talked about the people who were in that restaurant before what happened happened, and specifically remembered your daughter,’ Ehmer told mourners.

The CEO of Waffle House Walt Ehmer pauses as he speaks during the funeral of DeEbony Groves, who was killed in Sunday’s Antioch Waffle House shooting Saturday, April 28, 2018 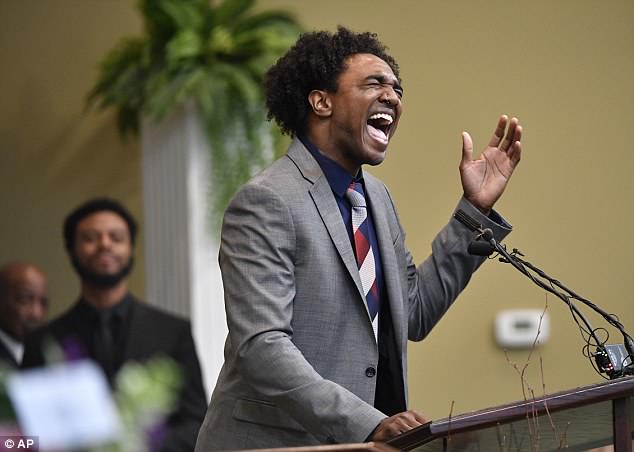 DiAngelo Groves sings during the funeral of his sister DeEbony Groves, who was killed in Sunday’s Antioch Waffle House shooting Saturday, April 28, 2018 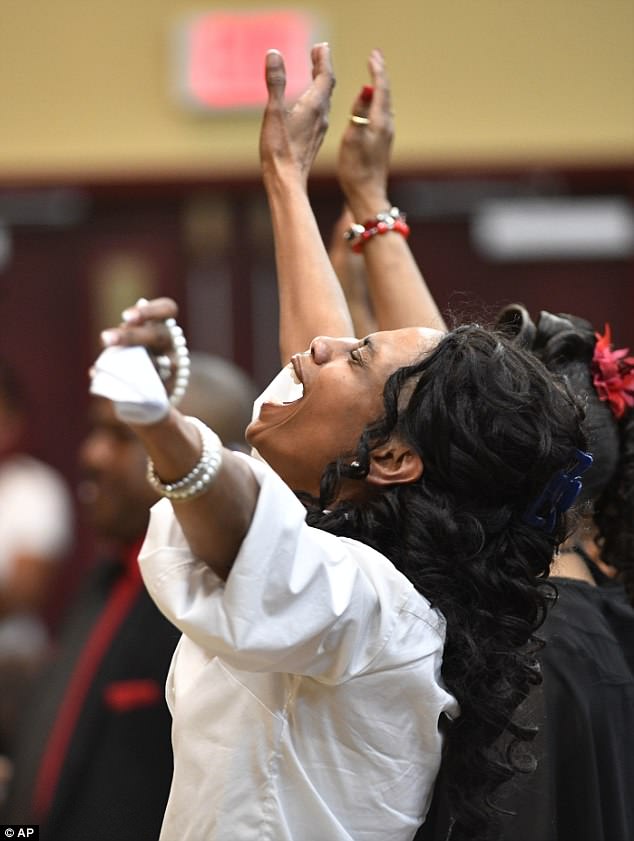 Shirl Baker reacts as her son DiAngelo Groves sings during the funeral of her daughter DeEbony Groves, who was killed in Sunday’s Antioch Waffle House shooting 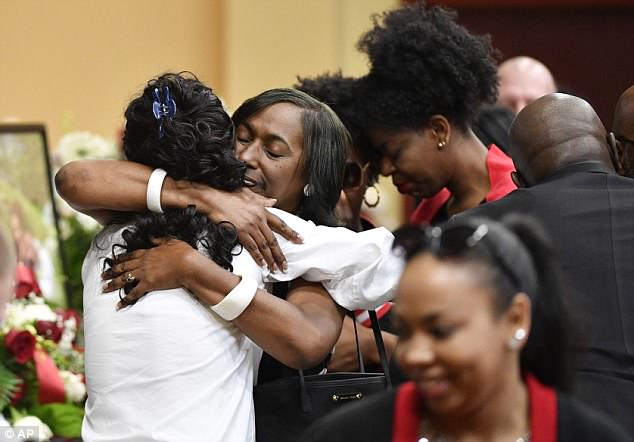 Shirl Baker receives hugs from well wishers before the funeral of her daughter DeEbony Groves, who was killed in Sunday’s Antioch Waffle House shooting

‘And (they) spoke of your daughter and her friend, and said they were singing gospel songs. And everybody was singing and enjoying each other and she said, “The last thing I remember her saying was, singing Jesus Loves Me.”’

According to CNN, Ehmer’s speech was met with applause and cheering and was embraced by friends and family at the funeral who took comfort in his words. 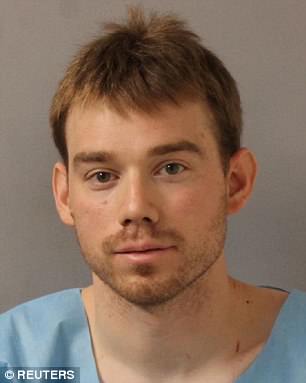 Groves, along with three others, were killed after suspected gunman Travis Reinking (pictured), 29, opened fire outside the Tennessee Waffle House

‘You will get through this because I know by watching this is a very strong, faith-filled community,” he told them.

Hundreds of people thronged the First Baptist Church in Gallatin, Tennessee on Friday, some hugging and crying, as they paid their respects to Groves, a senior at Belmont University.

Groves had been at the Waffle House with her Delta Sigma Theta sorority sisters after a night out on the town.

Groves, along with three others, were killed  after suspected gunman Travis Reinking, 29, opened fire outside premises with an AR-15 rifle and then stormed the restaurant.

Also killed was Akilah DaSilva, a 23-year-old rap artist from Antioch, Joe Perez, a 20-year-old who lived in Nashville and Taurean Sanderlin, a 29-year-old employee at the restaurant. Four people were injured.

‘All I can tell you is that our Waffle House family is hurting for you, and with you,’ Ehmer added.

The line of mourners waiting to give their condolences to members of the Groves family was so long that it snaked outside the Gallatin church. 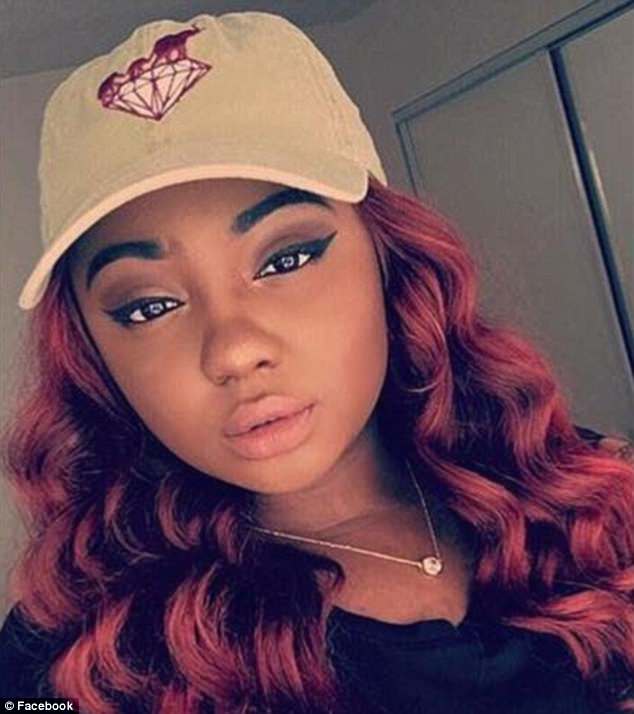 Hundreds of people thronged the First Baptist Church in Gallatin, Tennessee on Friday, some hugging and crying, as they paid their respects to DeEbony Groves (pictured)

Her parents and other stood in the front of the church beside her open casket. People cried, hugged and told stories of the woman who went by the nickname of Shae (SHAY). Those who loved her wore buttons bearing her picture.

Groves was a senior at Nashville’s Belmont University majoring in social work. She was remembered by family members Firday as a vivacious and outgoing woman.

A beaming smile was on display in so many of the pictures shown that were taken throughout her life, including one where she is holding a fish that looks like she caught.

Groves was very determined and was a perfectionist, her cousin, Juanesha Rodriguez, said.

‘She did, I think, what she could do in the time she had,’ she said.

She also loved children and hated to see them hurting, said her aunt, Carol Bibbs.

Reinking has been arrested and charged in connection with the shooting. He is facing multiple charges, including four counts of criminal homicide. A public defender listed as his attorney has not returned a message seeking comment.

Police have yet to establish a motive. 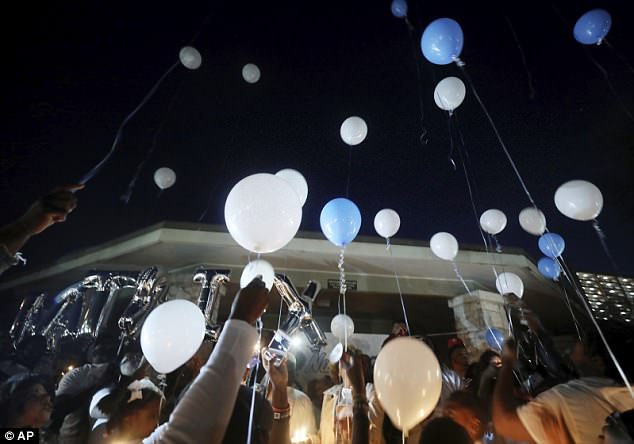 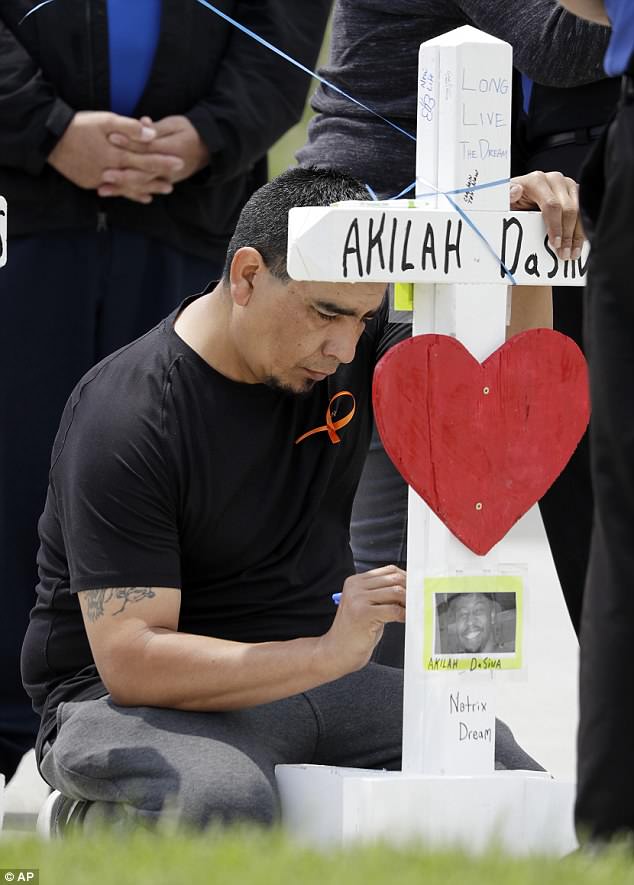