Model sisters Gigi and Bella Hadid were in good spirits as they posed with Harper Beckham at her mother’s show during Paris Fashion Week on Friday.

The siblings could be seen smiling as the leant in towards Harper, 11, as the trio posed for a photo after the event.

Harper looked adorable and wore in a black dress with lace detail from her mother’s collection, while she carried a black handbag.

All smiles: Model sisters Gigi and Bella Hadid were in good spirits as they posed with Harper Beckham at her mother’s show during Paris Fashion Week on Friday

Harper wore a white pair of shoes and her light brown hair was styled into plaits for the afternoon.

Gigi, 27, look incredible as she wore a black blazer and flashed her toned midriff in the ensemble she wore on the catwalk during the show. 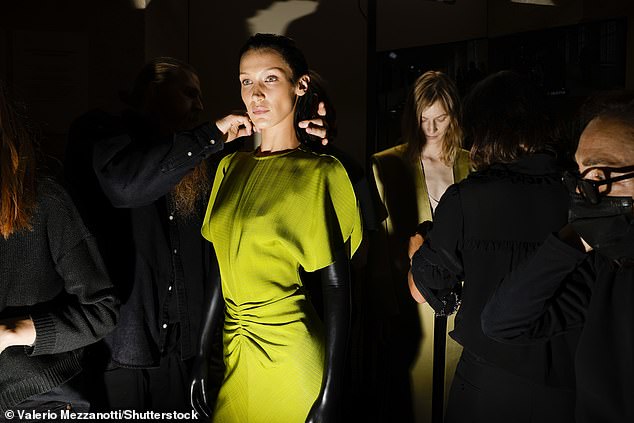 Preparation: Bella was ever the professional as she got ready to walk in the show backstage, where she was dressed and assisted before stepping out

She carried a small black clutch purse which featured a gold chain strap which rester over the back of her hand.

The supermodel’s ensemble featured oversized shoulder pads and a ruched bodice which she wore over black PVC opera gloves. 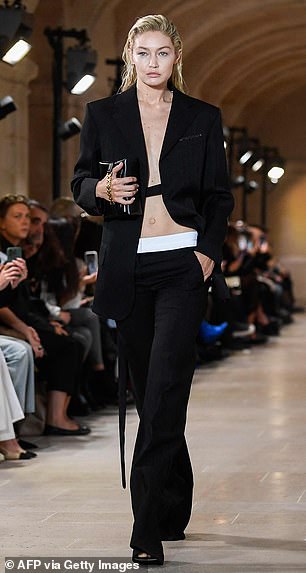 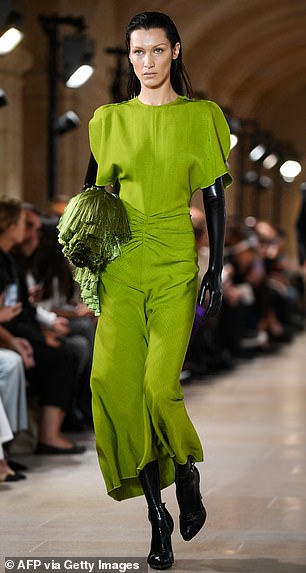 Supermodels: Gigi (left) and Bella (right) turned up the heat as they hit the catwalk at Victoria Beckham’s first Paris Fashion week show

Bella added extra height to her frame with matching black boots as she carried an oversized tasseled bag under one arm.

She was ever the professional as she got ready to walk in the show backstage, where she was dressed and assisted before stepping out.

Victoria shed a tear as she took to the catwalk at the end of her debut Paris Fashion Week show, where she was supported by her entire family, including husband David, 47, and her parents Jackie and Anthony Adams. 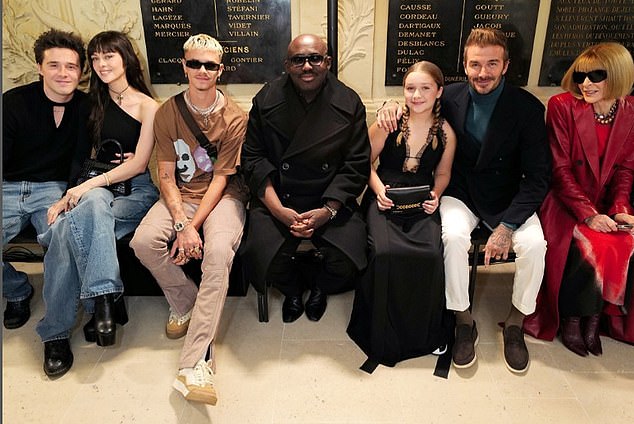 The ex pop star was overwhelmed as she reached out to give a hug to David after the show- who sat in the front row to support her, alongside their three youngest children – Harper Seven, 11, Romeo, 20, and Cruz, 17.

Victoria took to Instagram to share a picture of her loved ones, including Brooklyn and Nicola, who were rumoured to have been embroiled in a family feud.

Fans were in the dark about whether Brooklyn and Nicola would be at the show amid claims of a fall-out between Victoria and Nicola. 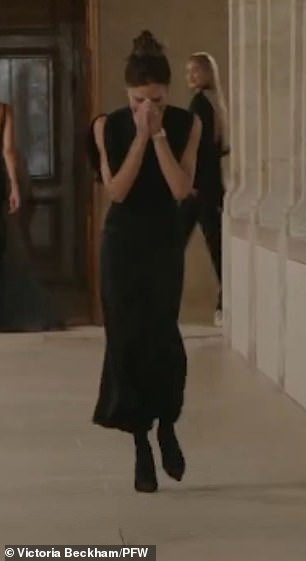 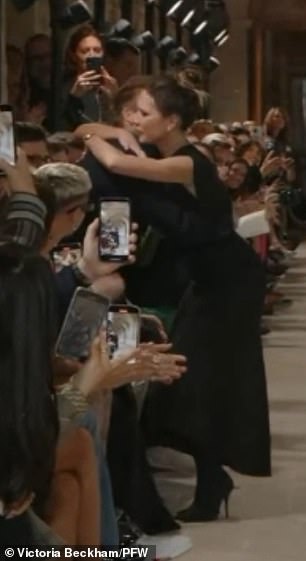 Emotional: Fashion designer Victoria was overcome with emotion as she took to the catwalk, holding her head in her hands

Reports of the feud have been rife for weeks, with Brooklyn’s wife adding fuel to the fire by claiming her mother-in-law ‘blanked’ her ‘for days’ during the design process of her wedding dress in a Grazia interview.

It was thought the show was a chance to patch things up for the family, with reports that she and David have reached out to sort things.

A source said: ‘Frankly, the most interesting thing about Nicola is that she married into the Beckham clan. David and Victoria have both reached out to her to try and make peace, and find a way to get along. 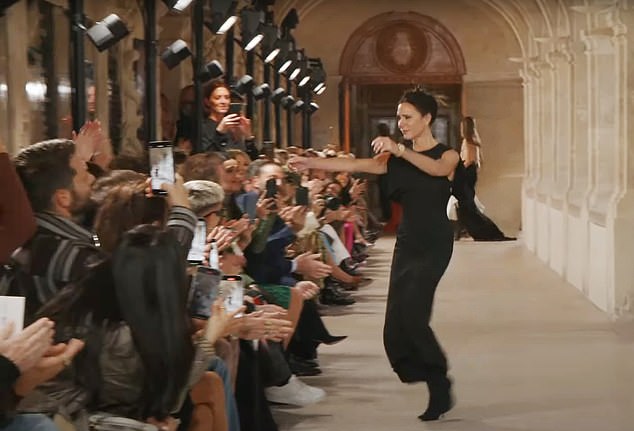 Too much: Victoria took to the runway at the end of the show, and appeared overcome with emotion during the appearance as she stopped at the front row to embrace family and friends 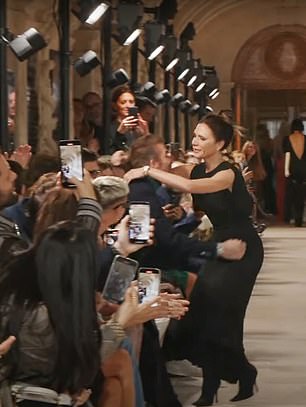 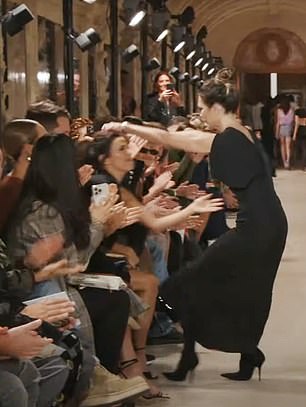 Support system: Reaching into the audience as she stopped halfway down the catwalk, a teary Victoria clung on to David – as best pal Eva Longoria also reached out for a supportive cuddle

‘David and Victoria would love to spend more time with their son and his wife, and be given the opportunity to welcome her into the fold, especially given that Brooklyn practically lives with his parents-in-law.’

Initially, rumours of a rift began as Nicola did not wear a Victoria Beckham wedding dress – which she claimed during the interview was her original plan, before being told the designer’s atelier could not make her a dress.

In the bombshell Grazia interview, she revealed: ‘We connected to start designing the dress, and then a few days went by and I didn’t hear anything. Victoria called my mom and said her atelier couldn’t make it.’

But insiders have said Nicola is pushing a ‘false narrative’, leaving Victoria ‘bemused’ as to why she keeps ‘stoking the rumours of a feud’ rather than shutting them down. 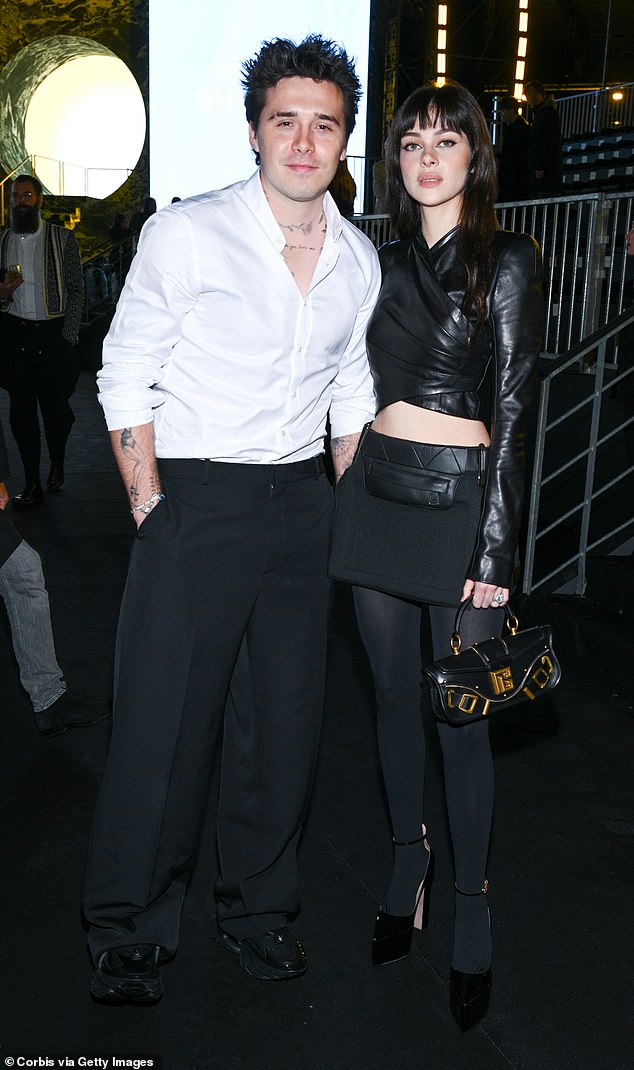 Olive branch: Brooklyn and Nicola attended the fashion show, after Victoria extended an invite to the pair amid the ongoing family feud