By Victoria Bischoff for the Daily Mail

Oh dear Ovo. The nation is facing an energy crisis that could cause the average bill to sky-rocket to an alarming £2,000 a year.

More than two dozen power firms have gone bust, and ministers are frantically poring over ways they could cushion the blow of looming price hikes, such as removing VAT on bills, boosting winter fuel payments and delaying tax rises.

Without urgent intervention, millions of vulnerable households could be forced to make the devastating choice between buying food and heating their homes.

So it is mind-boggling that a major supplier could be so detached from reality to think it appropriate to send customers an email with ‘simple’ energy-saving tips such as having ‘a cuddle with your pets and loved ones’, eating ‘hearty bowls of porridge’ and ‘doing a few star jumps’.

Feeling the heat: Complaints about energy suppliers are at a record-high and it is evident some billing systems are just not fit for purpose

A spokesman for Ovo Energy has since apologised for its poor judgment. But its embarrassing error should serve as a wake-up call to all energy suppliers.

As we report, the way many firms treat their customers is nothing short of a disgrace. Complaints are at a record high and it’s clear some billing systems are just not fit for purpose.

Companies may not be able to control wholesale prices. But, given customers are worried sick about how they will afford their bills this winter, firms could at the very least ensure the demands they dish out are correct.

Instead, time and again, we hear from readers who have been hit with shock statements wrongly claiming they owe hundreds or even thousands of pounds.

And when they try to challenge these, they are forced to spend months chasing to get the mistakes fixed.

Even customers with smart meters — which were supposed to guarantee that you only pay for the power you use — are struggling to get accurate bills.

Many of these errors pre-date the current crisis. So it’s high time that energy watchdog Ofgem investigated the issue of shambolic customer service in this industry.

In the meantime, firms must make sure customers receive monthly statements so they can avoid racking up large debts.

Ouch. My investment portfolio has taken a battering since the start of the year, after several technology-heavy funds plummeted in value.

Worried that I was over-exposed, I used Hargreaves Lansdown’s handy ‘portfolio analysis’ tool to get an exact breakdown of where my savings were invested.

The pie chart results suggest my money is nicely diversified among different sectors and countries.

So, for now, I am doing my best to ignore the alarming red minus numbers and will stick to my regular investing strategy in the hope that my funds bounce back.

To panic and sell now will only result in real cash losses. But this has served as a prudent reminder of the risk of being too invested in any one industry. 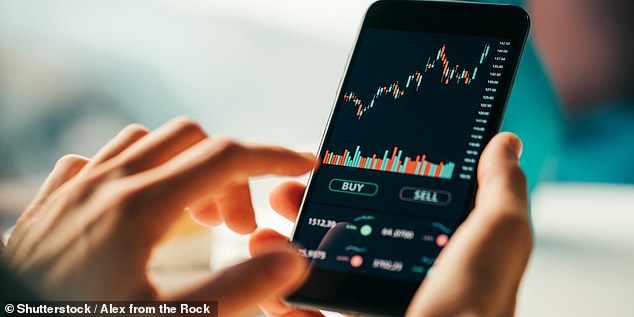 Some investment portfolios have taken a battering since the start of the year, after several technology-heavy funds plummeted in value

It has taken weeks of listening to tedious hold music to get through to Esure to update my card details and challenge my home insurance renewal quote.

For the first time ever, my premium had actually gone down — by an unimpressive £2.86.

But a quick search online suggested there were better bargains to be had. A spokesman for Esure says more than a fifth of its staff are on sick leave, which is why call waiting times are longer than usual.

Yet, as no one picked up until after January 1 — when rules were introduced to stop insurers offering cheaper deals to new customers — it meant I lost much of my haggling power. With just two days to go until my policy expired, I had little choice but to stay put.

I’d be interested to hear if any readers have bartered down their car or home insurance premiums since the New Year. Write to me at the email address below.

Finally, a hearty pat on the back to Virgin Media O2 for being the only major mobile provider not to bring back costly roaming charges for customers travelling in the European Union.

If only the firm would stop charging home movers unfair exit fees of up to £240 if they cannot get its broadband service at their new property, too.