A top Liberal who boasted his party was ‘on the hunt’ for an election win was left with egg on his face after every major network gave Labor the victory minutes later.

Transport infrastructure spokesman Matt Bach said his party was confident of a win and said a Liberal victory would be the outcome ‘tonight, or maybe tomorrow’.

However, major networks – the ABC, Sky, Seven and Nine – all called the race in favour of Mr Andrews shortly after 8pm.

His government will retain its majority, with ABC election analyst Antony Green calling at least 46 seats for the ALP.

‘Now, we are yet to determine whether that’s the majority or minority government. But what we can’t see is a pathway for the Coalition to win enough seats to get into government and Labor will end up with more seats than the Coalition.’

Reacting to the result, a disappointed Georgie Crozier, shadow health minister for the Liberals, described the night as ‘incredibly disappointing’.

‘Judging from these early votes that are coming in, obviously it is not a good result for us. It is incredibly disappointing. That is evident from what we’re seeing.

‘As others have said, we have to take on board this and learn from it and, you know, get back on that horse and show we are a viable alternative.

‘We’ve worked hard. We had what I felt was a very strong message but, clearly, the Victorian public haven’t taken that.’

Matt Bach also early indications from booths in Hawthorn made him hopeful Liberal John Pesutto would regain the once-blue-ribbon seat, which he sensationally lost in 2018.

Mr Bach said changing demographics in neighbouring Box Hill could make it trickier for the coalition to win the seat back from incumbent Labor MP Paul Hamer but was confident of holding Caulfield and Brighton in Melbourne’s southeast.

He said the campaign defied early polling which predicted a WA style wipeout and thought there’d be significant swings towards the coalition in traditional Labor areas such as Ivanhoe, held by current Police Minister Anthony Carbines on a margin of more than 12 per cent.

‘We’ve got a huge mountain to climb tonight but I think as long as we hold those seats that have been under threat, that are our current seats, we’re in the game.’ 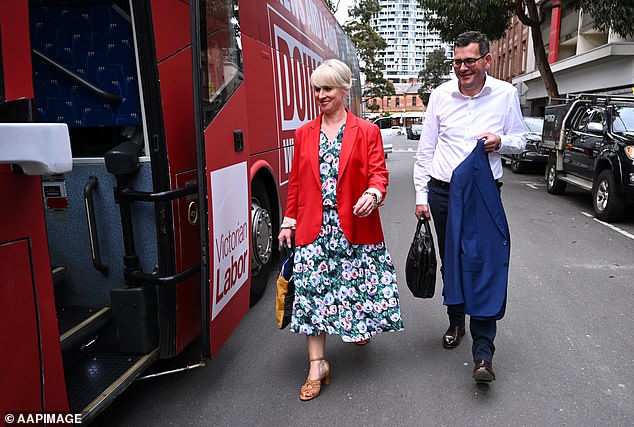 Liberal transport infrastructure spokesman Matt Bach warned his party is ‘on the hunt’ for Daniel Andrews (pictured with his wife, Catherine) and election victory

The Liberal faithful had arrived early at leader Matthew Guy’s election party at a bowls club in his electorate of Bulleen, but Mr Guy had not joined the party early.

Earlier on Saturday the opposition leader pledged to steer Victoria’s post-pandemic recovery by fixing healthcare and reducing debt if he is elected premier.

He said the coalition’s proposed $2 flat fare for public transport and $10 billion healthcare plan were examples of how his party would help give Victorians a fresh start.

‘I just hope all Victorians after today get the government that we know we need so much in this state,’ Mr Guy told reporters.

Mr Guy was joined by his wife Renae and their three children as he cast his ballot in his electorate of Bulleen.

Liberal health spokeswoman Georgie Crozier said it had been a tough campaign.

‘But we’ve made our case… and we have made our priorities very clear,’ she said on Seven Network.

Labor leads the coalition 54.5 per cent to 45.5 per cent on a two-party preferred basis, according to the latest Newspoll published by The Australian.