Daniel Andrews’ Labor Party is forecast to lose a dozen seats at this Saturday’s Victorian state election – and be forced to rely on the Greens to cling to power.

That is the prediction of veteran election analyst Malcolm Mackerras, who says Labor could lose 12 seats at the November 26 election forcing the Premier into minority government.

‘I just think he has alienated quite a few people,’ he told Daily Mail Australia.

‘Labor will lose its majority but will still be in government.’

RENEWABLE ENERGY: Policy to ‘replace coal and gas with 100 per cent renewable energy by 2030, while protecting workers and creating jobs’

Mr Mackerras, a former researcher for the Liberal Party during the 1960s, famously designed the Mackerras pendulum plotting the seats most likely to fall if there was a uniform swing against the government.

Labor faces losing inner-city seats to the Greens and the Liberal Party, as independents possibly pick up outer-Melbourne seats that had suffered the most from Covid restrictions.

Mr Mackerras, an 83-year-old visiting fellow at the Australian Catholic University in Canberra, predicted a 3.6 per cent swing against Labor.

That would see its current seat count fall from 56 seats, based on electoral redistributions, to just 44, leaving it one electorate short of a majority in the 88-member Legislative Assembly.

It would still see the Labor government returned with a 54 to 46 per cent margin, after preferences against the Liberal-National Coalition, which would see the Opposition’s seat count rise to 35 from 27.

He predicted the Greens would pick up the gentrified inner-Melbourne seats of Richmond, Northcote and Albert Park from Labor, with Liberal Party preferences, adding to their existing tally of Melbourne, Brunswick and Prahran.

This would double their lower house numbers to six from three.

While Victoria already has a Premier from Labor’s Socialist Left faction, the Greens are even more radical, campaigning for 100 per cent renewable energy by 2030, rent control, a ban on battery egg farming and $200million for gay and lesbian health programs.

‘The Greens will then expect promises from the Labor government if the Greens take Richmond and Northcote, and particularly if they take Albert Park, which is a possibility,’ Mr Mackerras said.

The minor party would also benefit in Northcote where former local member Lidia Thorpe, now a firebrand federal senator, isn’t running after losing that seat in 2018. 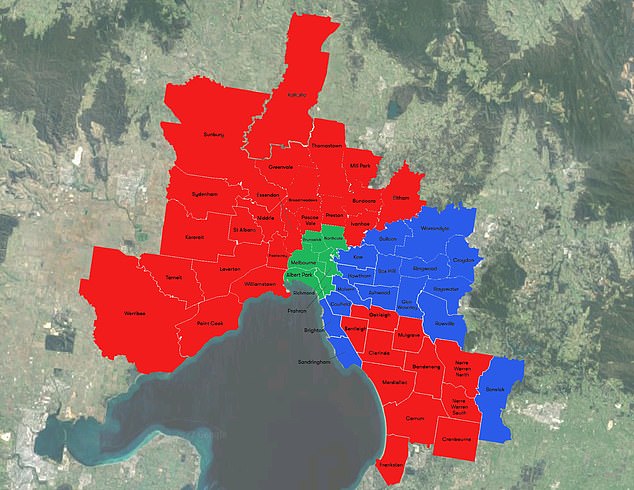 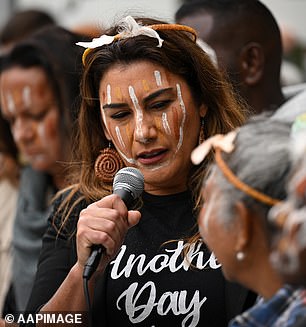 The Greens could also benefit in Northcote where former local member Lidia Thorpe, now a firebrand federal senator, isn’t running after losing that seat in 2018

‘All these Greens people thought Lidia Thorpe was wonderful but the voters out there didn’t think so.’

The Liberal Party was expected to pick up from Labor the Melbourne inner-east seat of Hawthorn, along with the other metropolitan seats of Ashwood, a new electorate, plus Box Hill, Ringwood and a newly-revived outer suburban electorate of Packenham.

Labor could also potentially lose the sea change seat of South Barwon, near Geelong, along with the Mornington Peninsula seat of Nepean.

The Liberal Party was expected to keep neighbouring Hastings, despite a redistribution reducing its margin to zero, along with the ultra-marginal outer Melbourne seats of Bayswater and Bass and the inner-seat of Caulfield. 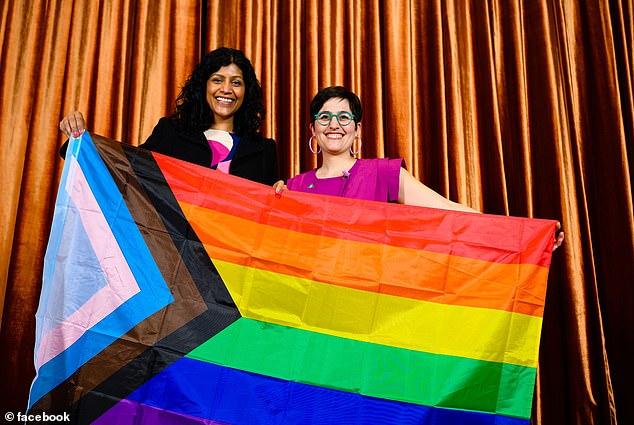 The rural western Victorian seat of Ripon, with a sitting Liberal MP, is notionally Labor following a redistribution but was expected to stay with the Opposition.

But he’s facing a challenge from independent Ian Cook, who is suing the Victorian government after his food catering business I Cook Foods was closed down following a health inspection.

Art gallery co-curator Andrew King is also running and offered to pay $350 to those willing to run.

Mr Andrews has first place on the ballot, making him the most likely beneficiary of the donkey vote.

‘If the Liberal Party gains the seats I am talking about, then I wouldn’t be surprised if we have a minority Labor government,’ Mr Mackerras said.

The La Trobe valley seat of Morwell, east of Melbourne, could return to Labor based on new boundaries and following the retirement of sitting independent Russell Northe, a former National.

But Labor also faces strong challenges from independents in outer suburban areas, which could see the government lose the seat of Melton in Melbourne’s outer north-west.

‘They may do quite well in some marginal Labor seats which are outer metropolitan,’ Mr Mackerras said.

‘I wouldn’t be at all surprised if Melton is won by an independent.

‘Independents are a threat to Labor in outer metropolitan areas and I am quite willing to accept that is so.’

While the new seat of Packenham could switch from Labor to Liberal, Mr Mackerras said an independent also had a strong chance in this electorate in Melbourne’s outer east.

‘They’re perceived to be more moderate – they are not perceived to have fallen down on their duty,’ Mr Mackerras said.

‘I don’t see state Liberal parties losing among that kind of voter.’ 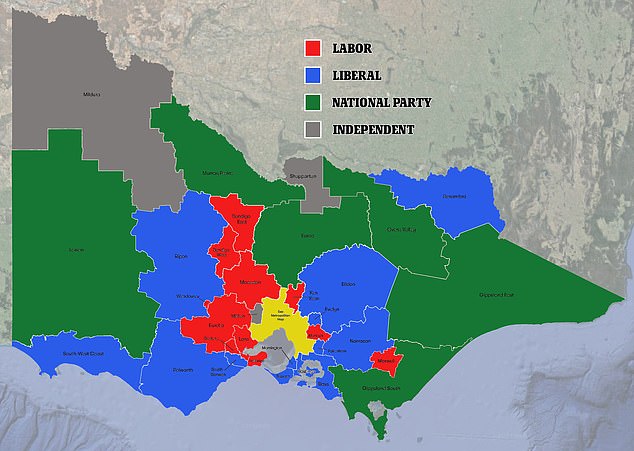 Labor could also potentially lose the sea change seat of South Barwon, near Geelong, along with the Mornington Peninsula seat of Nepean as the safe Labor seat of Melton in Melbourne’s outer west goes to an independent

They overlap with the federal seats of Goldstein and Kooyong, previously held by former treasurer Josh Frydenberg, which the Liberal Party lost at the May election to teal independents Monique Ryan and Zoe Daniel.

Should Mr Andrews win this Saturday’s election, he would become Victoria’s third Labor premier to win a third consecutive term, after John Cain in 1988 and Steve Bracks in 2006.

But his Labor predecessors also won a third consecutive majority – something which may elude Mr Andrews with Melbourne’s 262 days in lockdown making it the world’s most restricted city during the pandemic.

A Labor victory on Saturday would see Mr Andrews surpass 3,000 days in office, should his party leadership remained unchallenged, and see a statue of him installed at Melbourne’s Treasury Place.

A bronze statue of Mr Andrews would stand along his Labor predecessor John Cain junior, and the long-serving Liberal premiers Henry Bolte and Rupert Hamer, along with Country Party leader Albert Dunstan.

Mr Mackerras said voters were most likely dissatisfied with both major parties.

‘There are so many people who say both sides deserve to lose,’ he said.

His predictions are based on applying Newspoll results to his electoral pendulum following electoral redistributions ahead of the 2022 election.

Labor seats that could fall to the Liberal Party, Greens or an independent

NEPEAN: Back to Liberal Party with Labor margin of 0.7 per cent in Mornington Peninsula seat.

NORTHCOTE: Back to Greens with Labor margin of 1.7 per cent in Melbourne inner north seat previously held by Lidia Thorpe, now a Greens senator.

PAKENHAM: Back to Liberal Party with nominal Labor margin of 2.2 per cent in revived Melbourne outer south-east seat. Outside chance of independent gain.

RIPON: Opposition frontbencher Louise Staley is the Liberal MP but her electorate west of Bendigo is notionally Labor with a 2.7 per cent margin based on new boundaries in this regional seat in western Victoria. Liberal Party gain based MP overcoming redistribution.

SOUTH BARWON: Back to Liberal Party with Labor margin of 3 per cent. Sitting member Darren Cheeseman was previously the federal member for the overlapping coastal federal seat of Corangamite west of Geelong.

BOX HILL: Back to Liberal Party with Labor margin of 3.1 per cent in this Melbourne inner-east electorate. Opposition frontbencher Robert Clark lost this seat in 2018 after 26 years as the local MP.

RINGWOOD: Back to Liberal Party with Labor margin of 3.2 per cent in this Mebourne east electorate.

MELTON: Independent gain with Labor margin of 5 per cent in Melbourne’s outer west.

RICHMOND: Greens gain with Labor margin of 5.8 per cent in this inner-Melbourne electorate. Sitting member and former minister Richard Wynne is retiring and the Greens are running former local mayor Gabrielle de Vietri.

ALBERT PARK: Greens gain despite hefty Labor margin of 13.1 per cent margin in this seat in Melbourne’s inner south.