Victoria is set to break the record for its single daily increase in coronavirus cases, with 723 infections to be announced on Thursday.

The expected figure is more than double Wednesday’s 295 infections and far exceeds the state’s previous record of 532 cases on Monday.

Victoria reported nine additional fatalities on Wednesday, taking the state’s death toll to 92 and the national figure to 176.

Victoria is set to break the record for its single daily increase in coronavirus cases on Thursday. Pictured: Medical staff are seen at St Basil’s Home for the Aged Care in Fawkner

Seven of the fatalities are linked to private aged care facilities in the state, which are now tied to 46 deaths.

Thursday’s expected record comes after two days of declining figures. The number of new cases dropped to 295 on Wednesday from 384 on Tuesday and 532 on Monday. 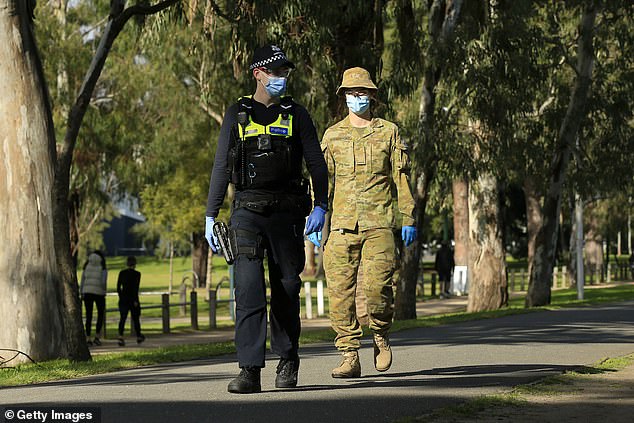 Premier Daniel Andrews said of the 500 visits already, people were not home for 29 of them. Those cases have been referred to police.

‘(It) is not about compliance, but making sure that every single positive case understands what we are asking them to do,’ he told reporters on Wednesday.

‘And it is their opportunity to ask what they need from us, what can we do for you to support you in unique circumstances.’