Victorian country house in Shrewsbury on market for £2.25m

A spectacular country house built by the architect who designed the facade of Buckingham Palace has been put up for sale for £2.25million.

Sir Aston Webb, who also designed the Victoria and Albert Museum, completed the huge Yeaton Peverey Hall in Shrewsbury, Shropshire, in 1892, with a vast array of luxury features.

The 11-bedroom Yeaton Peverey Hall, pictured, has been put up for sale for £2.25million. It was designed by famous architect Sir Aston Webb, who also designed the facade of Buckingham Palace 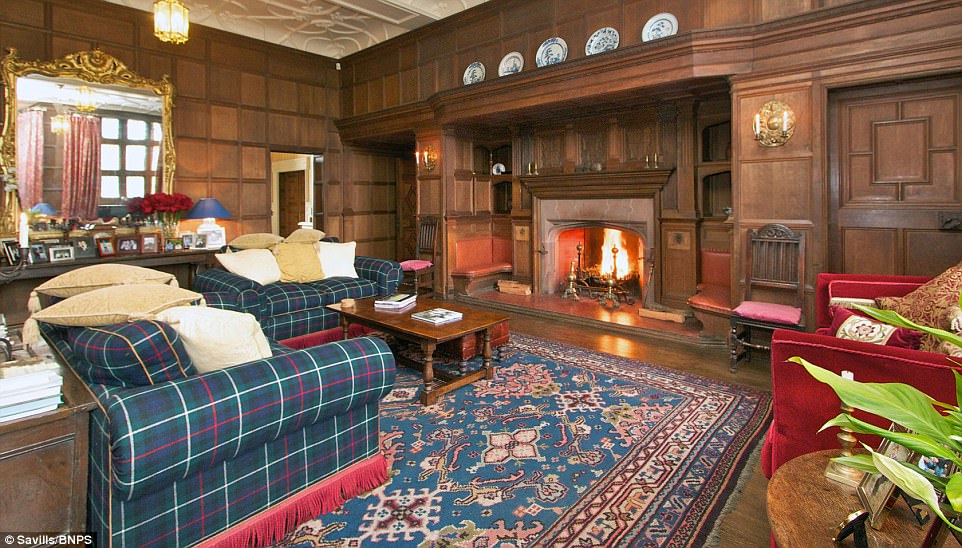 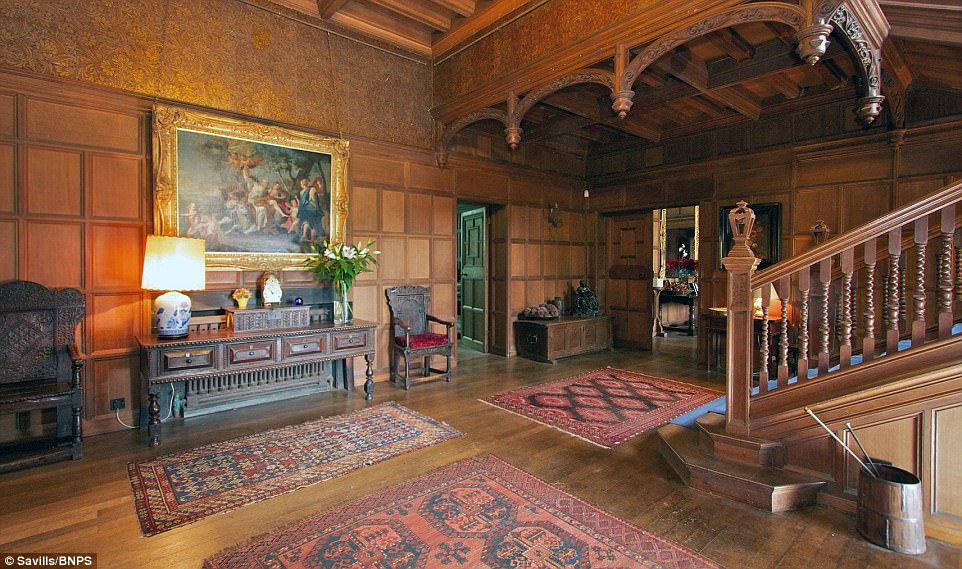 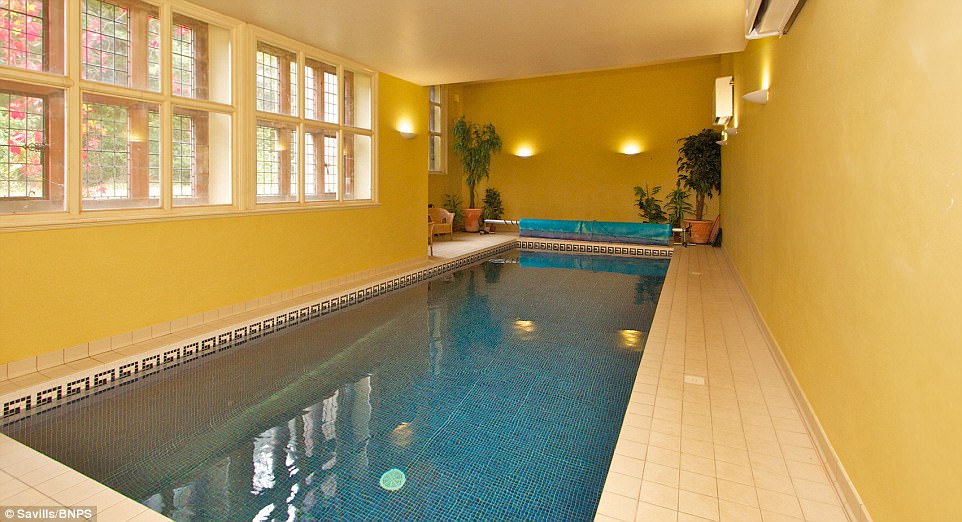 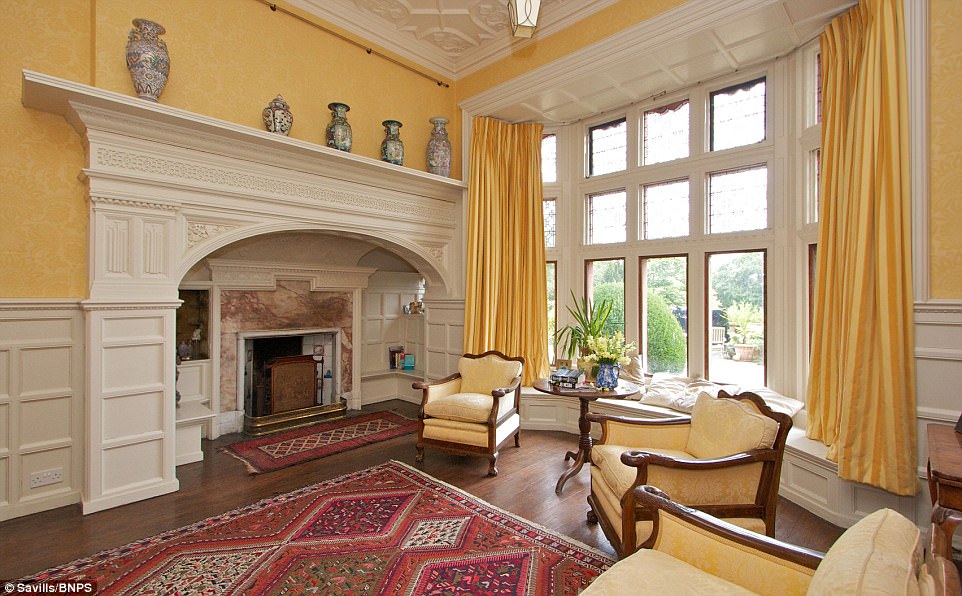 Before the current owner purchased the ‘one-of-a-kind’ property it had previously been used as a school. Pictured is one of the large fireplaces in the living room

Much like his later works, Sir Aston’s Yeaton Peverey Hall boasts a ‘striking’ exterior, with English oak, green slate and red sandstone adorning the outside.

The rooms were designed to be visually impressive, especially the conservatory, featuring an oratory, and the ballroom, which has stained-glass windows and intricate plasterwork.

Many of the walls inside are still decorated with their original wallpaper while the others are bedecked in cedar panelling and inglenook fireplaces are dotted throughout.

The former servants’ wing at the east of the house has been converted to five apartments, which prospective owners could rent out to provide additional income of around £32,000 a year.

Set within six acres of countryside, the grounds include a walled garden that incorporates six domed summer houses, a pair of lodges and a tennis court.

The home’s current owner, who has been there for 30 years, has completely restored it from its previous use as a school. 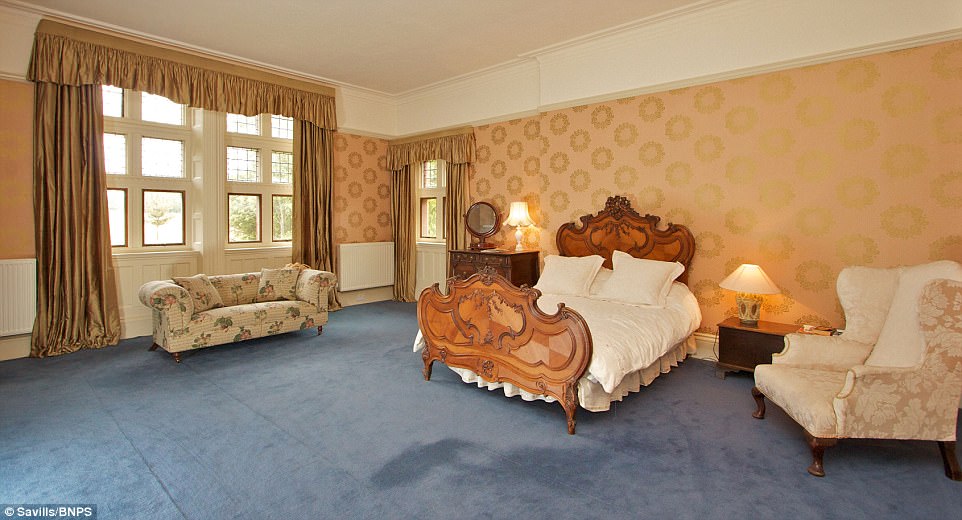 Pictured is one of the huge bedrooms in the property, while a former servants’ wing has been converted into five bedrooms which could be rented out for as much as £32,000 per year 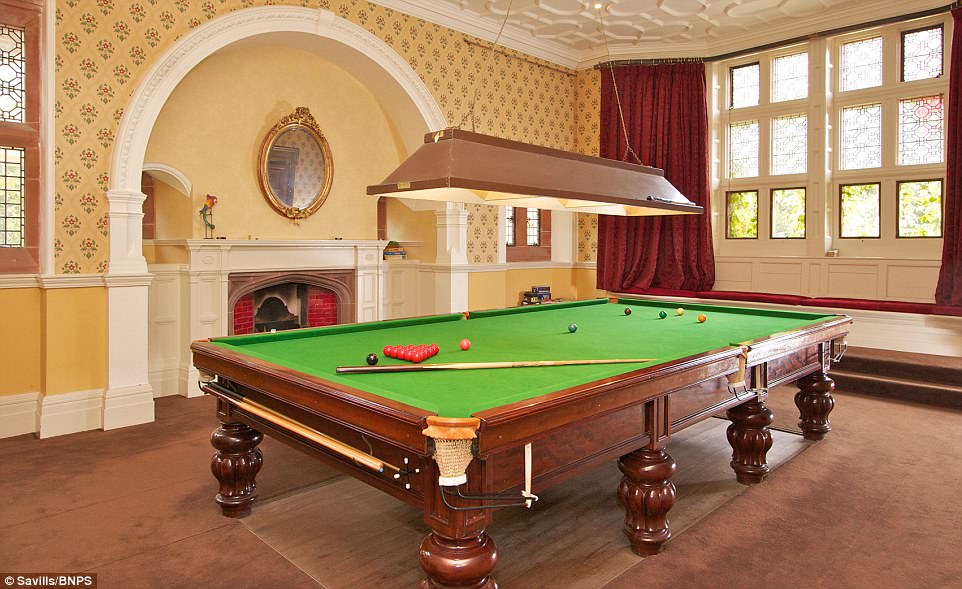 Among the other luxury features are a billiards room, pictured, while the house has been described as having great ‘historical and cultural significance’ due to its famous designer 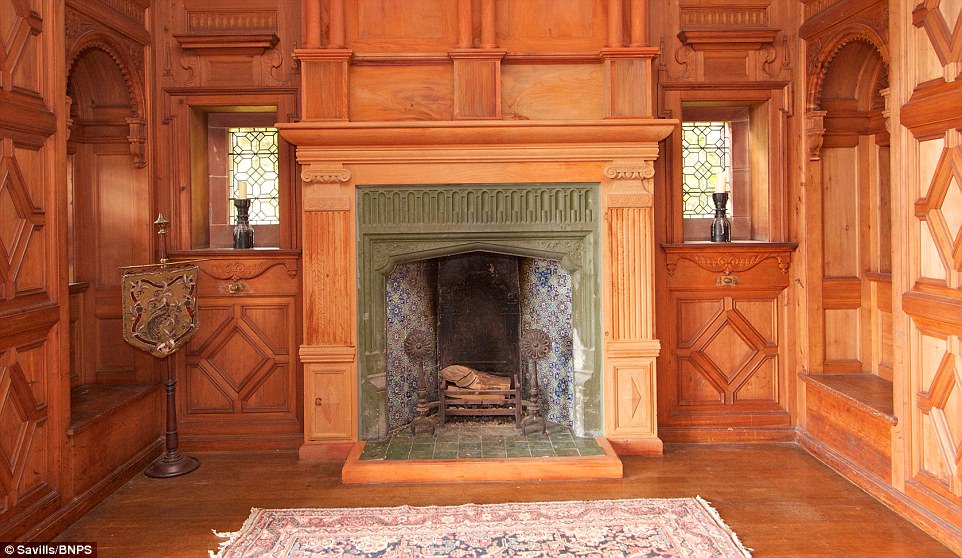 Estate agents Savills, which is marketing the property, said the house was built ‘with little regard for expense’ and had been ‘extremely well-maintained’ ever since 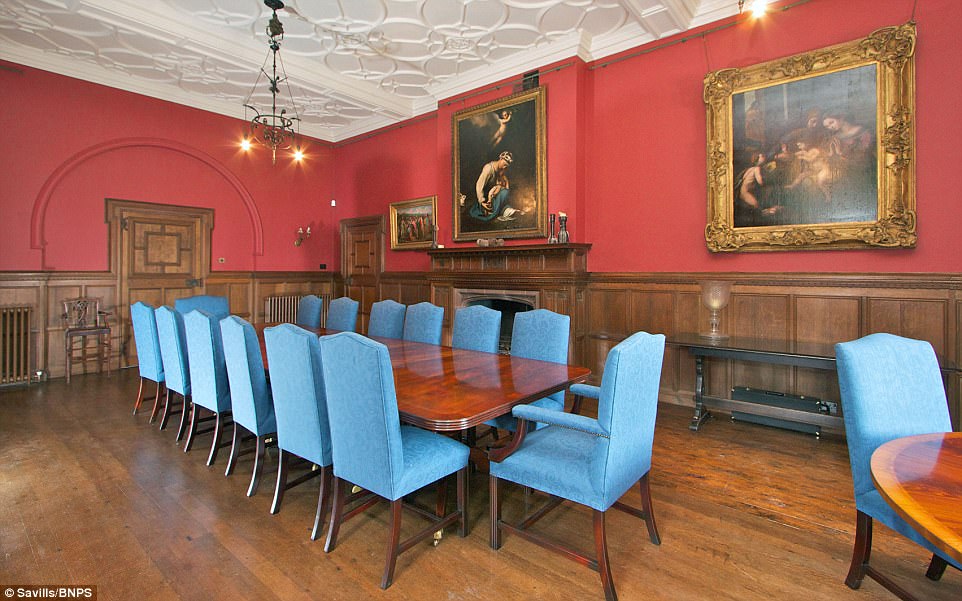 They have now decided to offer it for sale through Savills estate agent.

Sir Aston Webb was the son of a watercolour artist who inherited his father’s creativity and went on to design some of Britain’s most famous buildings.

After training as an architect and travelling Europe and Asia as a young man, he opened his own practice in 1874 aged 25 and then began working with business partner Ingress Bell around a decade later.

Their first project was the Victoria Law Courts in Birmingham and the Victoria and Albert Museum followed a few years later in 1891.

The redesign of the Buckingham Palace facade took place in 1913, by which point he was also responsible for the Admiralty Arch in London and the Britannia Royal Naval College in Dartmouth, Devon.

He was president of the Royal Academy and the Royal Institute of British Architects and the founding chairman of the London Society.

‘The house has great cultural and historical significance as it was built by the architect Sir Aston Webb.

‘Webb was famous at the turn of the last century for remodelling the principal facade of Buckingham Palace and the main building of the V&A Museum.

‘The house was built with virtually no regard to cost, and it has since been extremely well maintained.

‘Our client has has completely restored the it in recent years as it was formerly used as a school.

‘A particularly appealing feature of this property is the income that derives from the five apartments, which essentially offsets the costs of running the house.

‘We have received interest from locals looking to upsize as well as Londoners who are looking to make a move to the country and a number of international buyers seeking a beautiful English country home that represents good value for money.’

Other works by Sir Aston Webb include Admiralty Arch in London and the Britannia Royal Naval College in Dartmouth, Devon.

He was president of the Royal Academy and the Royal Institute of British Architects and the founding chairman of the London Society. 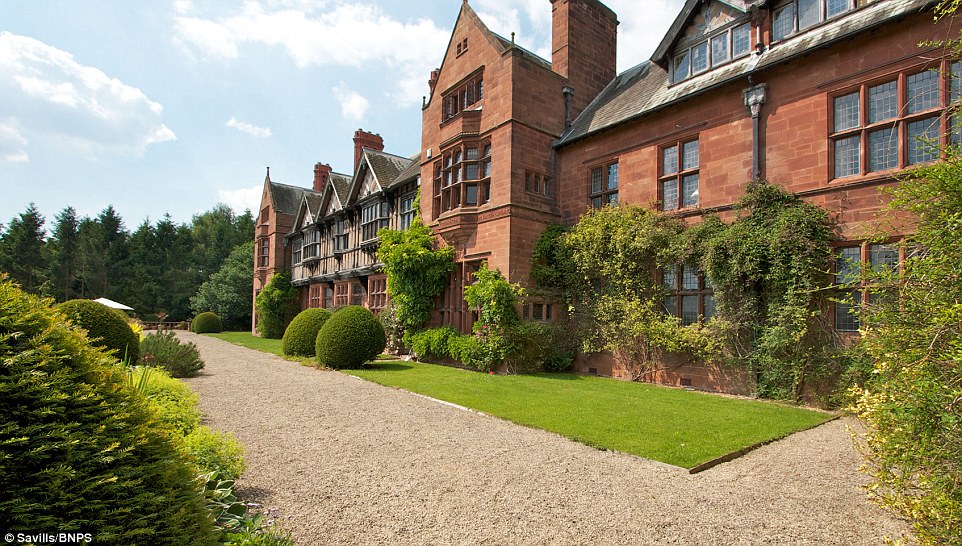 The grounds include a walled garden that incorporates six domed summer houses, a pair of lodges and a tennis court 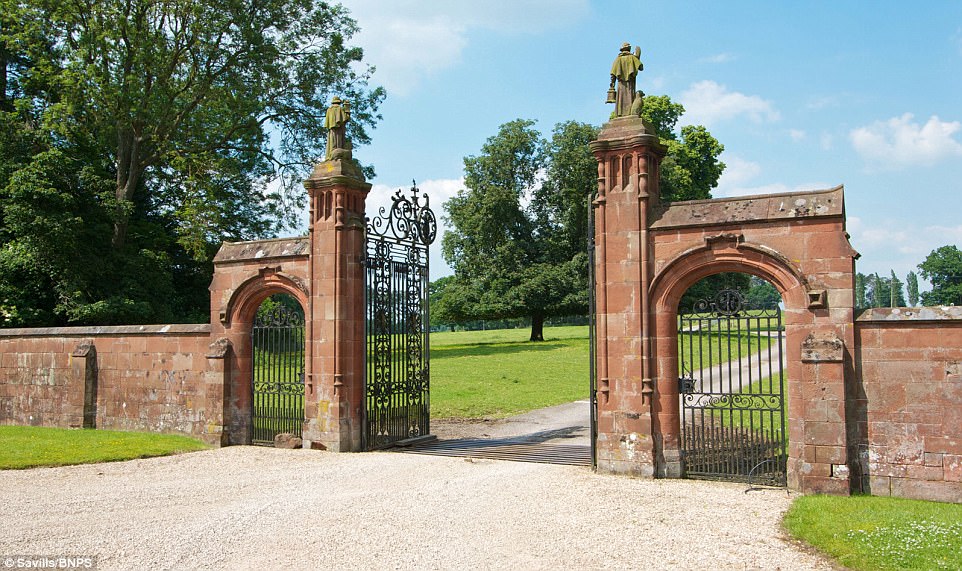 The main gates of the property are also designed with flair in mind by Sir Aston, who was also responsible for the Admiralty Arch in London and the Britannia Royal Naval College in Dartmouth, Devon 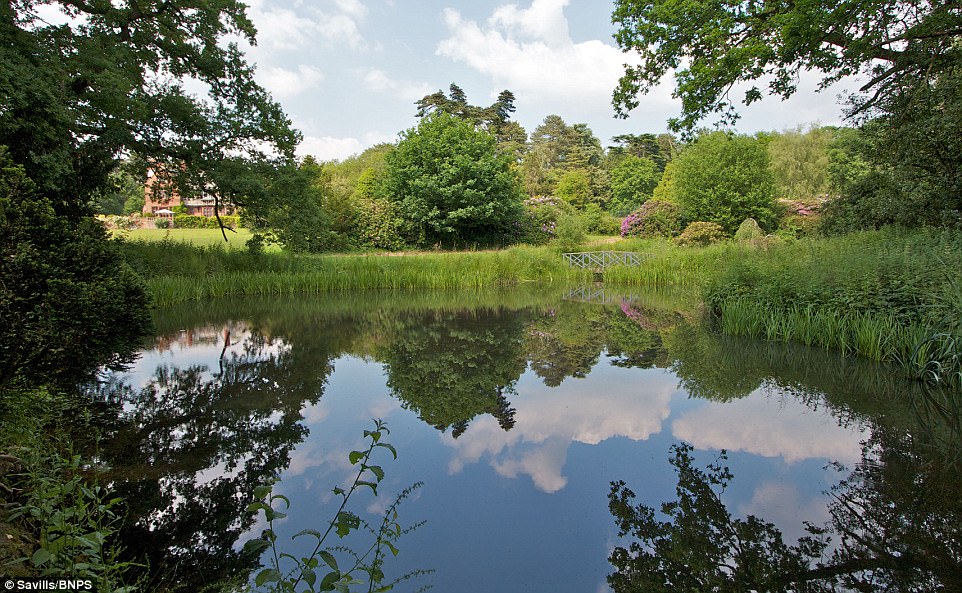 The extensive grounds also include a small lake, pictured, with the new owner coming into possession of a very picturesque property