The woman touted as a replacement for Victoria’s beleaguered Labor Premier Daniel Andrews has been silenced by her boss.

Jacinta Allan, the popular Minister for Transport Infrastructure, has emerged as a contender for the top job with draconian Stage 4 lockdowns decimating the state economy and the government’s once unassailable popularity.

‘There’ll be a political accounting for this,’ he told Daily Mail Australia.

While there is no suggestion a leadership challenge is imminent, a Victorian Labor Party source from the Premier’s own Socialist Left faction said Ms Allan would be a capable replacement for Mr Andrews.

Jacinta Allan, the popular Minister for Transport Infrastructure, has emerged as a contender for the top job after draconian Stage 4 lockdowns decimate the state economy and the government’s once unassailable popularity. 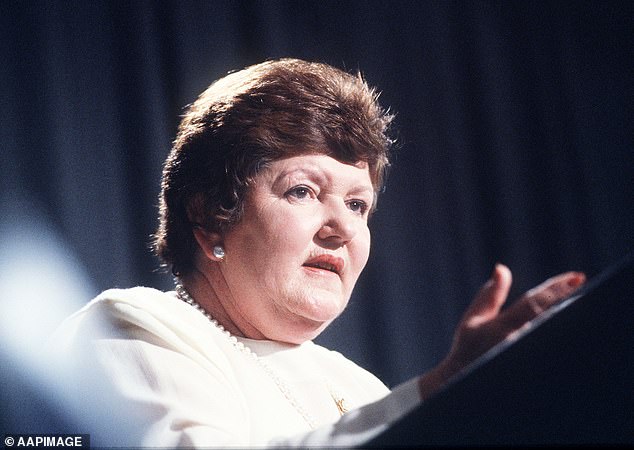 This week, the 46-year-old mother of two who has 14 years’ of ministerial experience, promised Daily Mail Australia a statement paying tribute to the late Joan Kirner (pictured), to mark the 30th anniversary of her becoming Victoria’s first-ever female premier

The 46-year-old mother of two – who has 14 years’ of ministerial experience – this week promised Daily Mail Australia a statement paying tribute to the late Joan Kirner, to mark the 30th anniversary of her becoming Victoria’s first-ever female premier.

But the next morning, a spokeswoman from Mr Andrews’ office rang to say Ms Allan would not be providing a tribute to Ms Kirner, instead directing enquiries to the Minister for Women Gabrielle Williams.

Rosemary Follett, Chief Minister of the Australian Capital Terrritory: May 1989 to December 1989

The Labor Socialist Left source said Ms Allan and another left-winger Jill Hennessy, who held the health portfolio before becoming Attorney-General, were the leading contenders to replace Mr Andrews.

‘Jacinta is obviously someone who people would consider if Daniel falls under the proverbial bus,’ this factional insider told Daily Mail Australia.

‘Jacinta is someone people would be talking about.

‘Would Jacinta be a good option? She’s certainly someone who would be actively considered by a lot of people.’

Mr Danby, the former member for Melbourne Ports, described the Andrews Government’s handling of the hotel quarantining as ‘shameful’.

‘Unfortunately, we have to go through this period of lockdown to try and suppress the disease to the level that exists in New South Wales – it’s shameful it came to this,’ he told Daily Mail Australia.

Mr Danby, who hails from Labor’s Right faction, slammed the policy of giving contracts to private security firms led by minority groups instead of initially putting the Victorian police or the Australian Defence Force in charge like other states, which have not been placed into a Stage 4 lockdown.

‘Why that decision was made – it just doesn’t seem logical to anyone,’ he said, likening lockdown to the London bombings of World War II.

‘We’re grinning and bearing it – that’s what people did during the Blitz.

‘They should have done what they did in all other states.’

With Victoria recording another 278 new COVID-19 cases, Mr Danby also blamed the left-wing ideology of ‘intersectionality’ for the policy of giving contracts to minority-led security firms.

‘If it’s true that a firm was chosen to be hotel guards because of that criteria, then whoever is responsible for that intersectional decision should resign – whether it’s a bureaucrat or a minister,’ he said.

Mr Andrews was regarded as ‘bland’ when he took over a Labor leader a decade ago by his own hard-left faction. 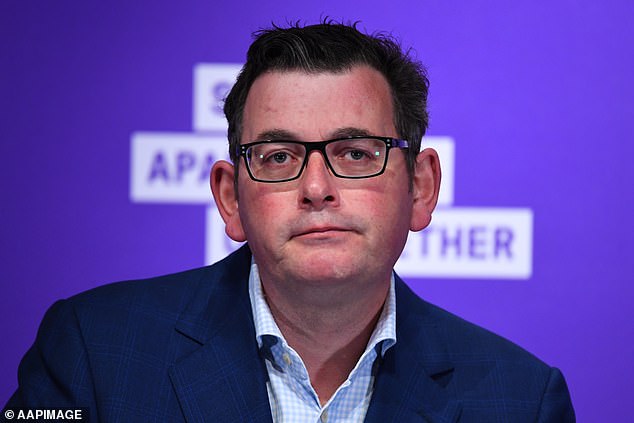 The next morning, a spokeswoman from the office of Premier Daniel Andrews (pictured) rang to say Ms Allan would not be providing a tribute to Ms Kirner, instead directing enquiries to the Minister for Women Gabrielle Williams – who isn’t regarded as a serious leadership contender

‘Frankly, a lot of people didn’t think he’d last and he did.’

If history is any guide, election-winning premiers, even in Victoria, can lose power without being voted out by the people if there’s an economic catastrophe looming.

In her first fortnight as Victoria’s first female premier – and only the second woman in Australia to lead a state government – Ms Kirner agreed to sell the State Bank of Victoria to the federal government, then led by Labor’s Bob Hawke.

Ms Williams, Victoria’s Minister for Women, described Ms Kirner as someone who ‘left an indelible mark on Victorian politics and remains a role model, not just for women, but Victorians everywhere’.

‘As we mark 30 years since her time as Victorian Premier, we pay tribute to her contribution while also noting there’s still more work to do to achieve gender equality – a task we continue to pursue every day,’ she told Daily Mail Australia. 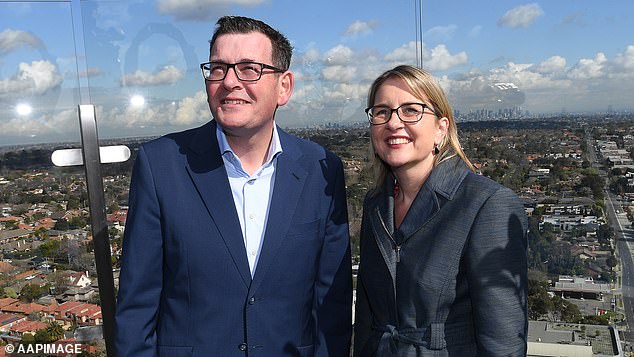 While there is no suggestion a leadership challenge is imminent, a Victorian Labor Party source from the Premier’s own Socialist Left faction said Jacinta Allan (right) would be a capable replacement for Daniel Andrews (left)

Like Ms Kirner’s predecessor Mr Cain, Mr Andrews took Victoria’s Labor Party from the electoral wilderness and won re-election in a landslide, only to govern as a recession loomed.

History could be repeating, with a once-popular premier in Victoria now vulnerable to a challenge from his own side, despite his Labor Party in November 2018 winning more than double the number of seats as the Opposition Liberal and National parties combined.

In 2020, Ms Allan is a face of a popular $8.3billion program to replace dangerous railway crossings – with 38 to date replaced under her watch.

Like her boss, she also hails from Labor’s Socialist Left faction – which also produced Ms Kirner. 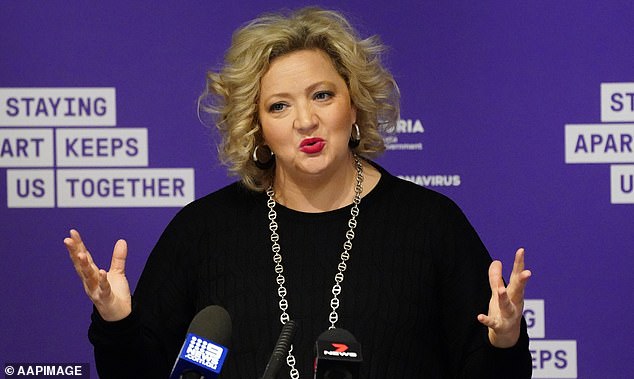 Attorney-General Jill Hennessy, another minister from the Socialist Left faction who previously held the health portfolio, is regarded as another possible leadership contender

In just two months, Mr Andrews’ approval rating in Newspoll plunged from 75 per cent in April, when he was riding on the crest of approval for his handling of the bushfires, to 57 per cent in mid-July.

While 57 is still a healthy number, his dissatisfaction rating more than doubled from 17 per cent to 37 per cent in the same period, even before Melbourne and the neighbouring Mitchell Shire were placed into a strict Stage 4 lockdown.

The economy is also on the skids with the state’s own Department of Treasury and Finance predicting 325,000 Victorians will be out of work by the end of September – up from 265,700 in June.

A jobless rate of 11 per cent is also expected – a level unseen since 1994 during the long aftermath of the 1991 recession that saw older, mainly blue collar men lose their jobs. 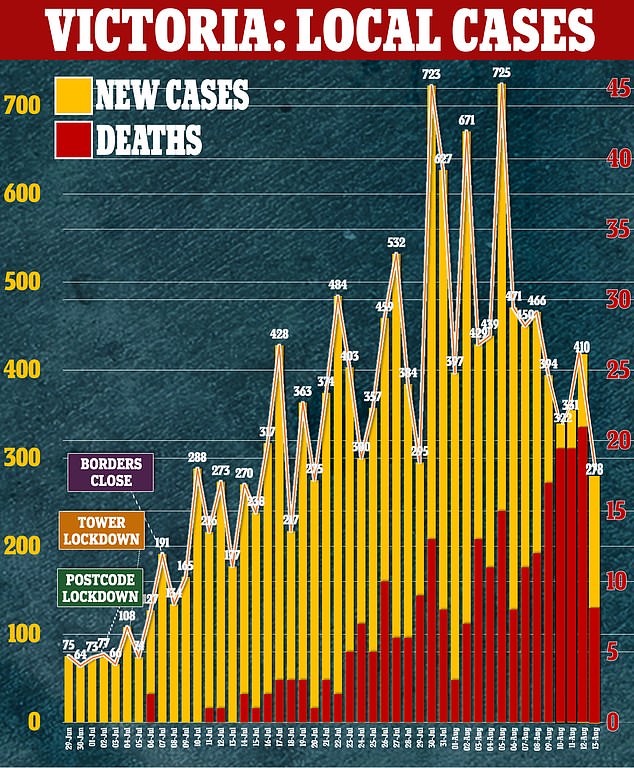 Thursday’s fatalities bring the state’s toll to 275 and the national figure to 360. A record 725 new daily infections were recorded on August 5