Victorians living on the outer fringes of Melbourne have spent another uneasy day worrying about how long they have until life for them gets even tougher.

Hard working families in some of the city’s working class suburbs fear they could be a moment’s notice from being cast back into their isolation nightmares of just a few months ago.

While thousands of Victorians hit the streets to protest as part of the Black Lives Matter movement, the state government has pointed the finger at families for Victoria’s recent spike in coronavirus infections.

People enjoy a quick coffee and something to eat at a Broadmeadows cafe. Residents there face lockdown if COVID-19 cases continue to rise 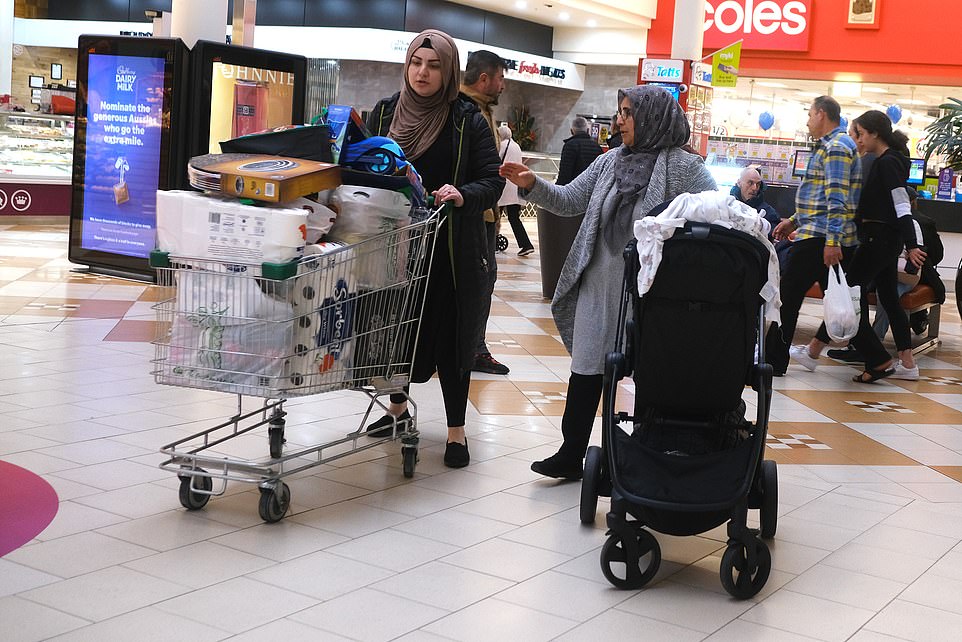 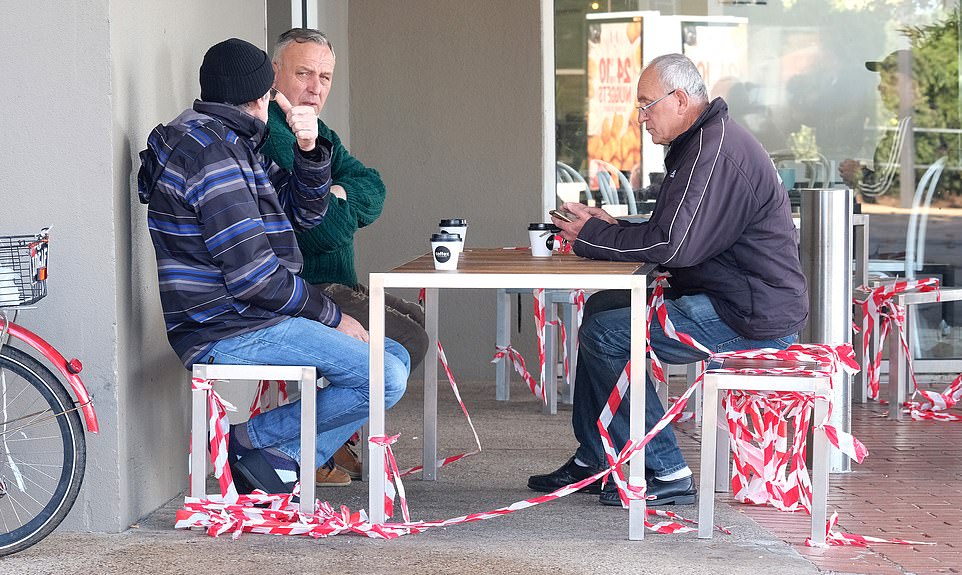 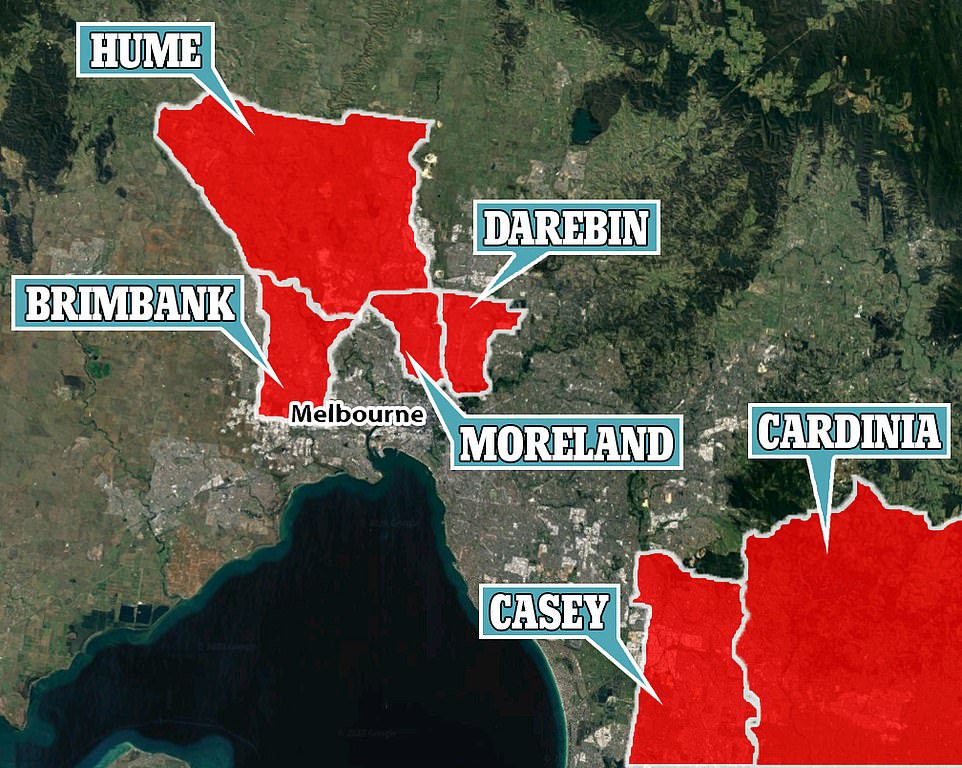 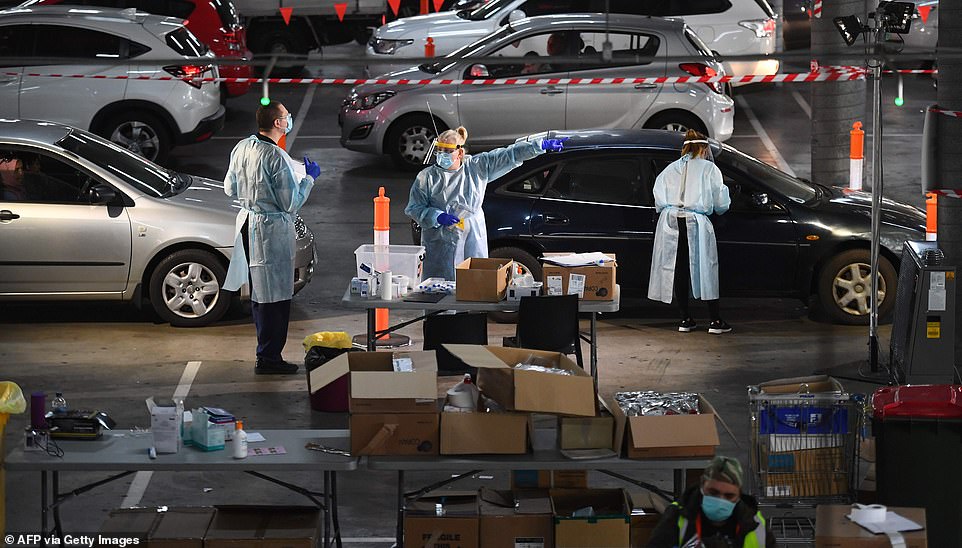 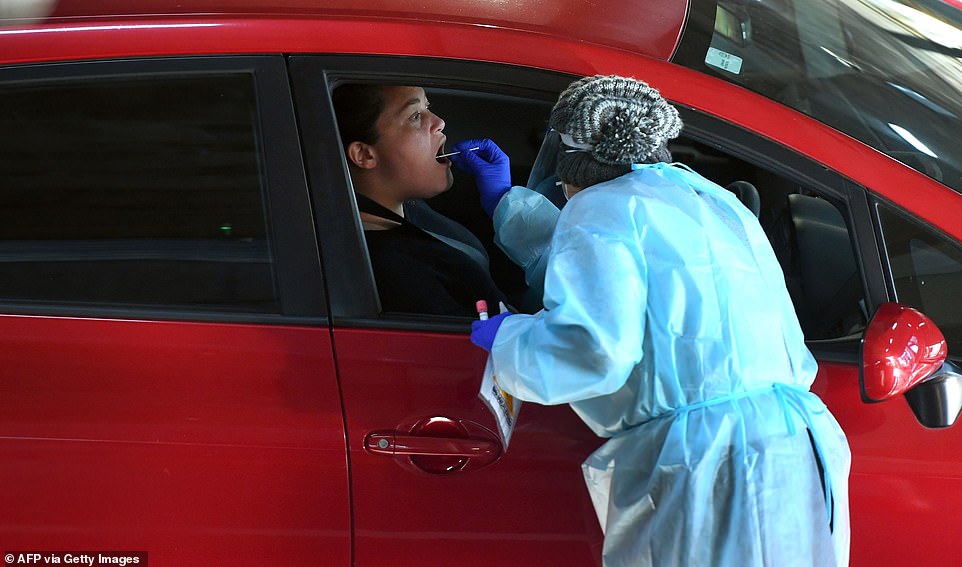 Over the weekend, 44 new cases of COVID-19 were diagnosed in Victoria, after Australia enjoyed weeks of single digit transmissions. Pictured: Medical workers test a man at a drive-through site in a shopping centre carpark in Melbourne 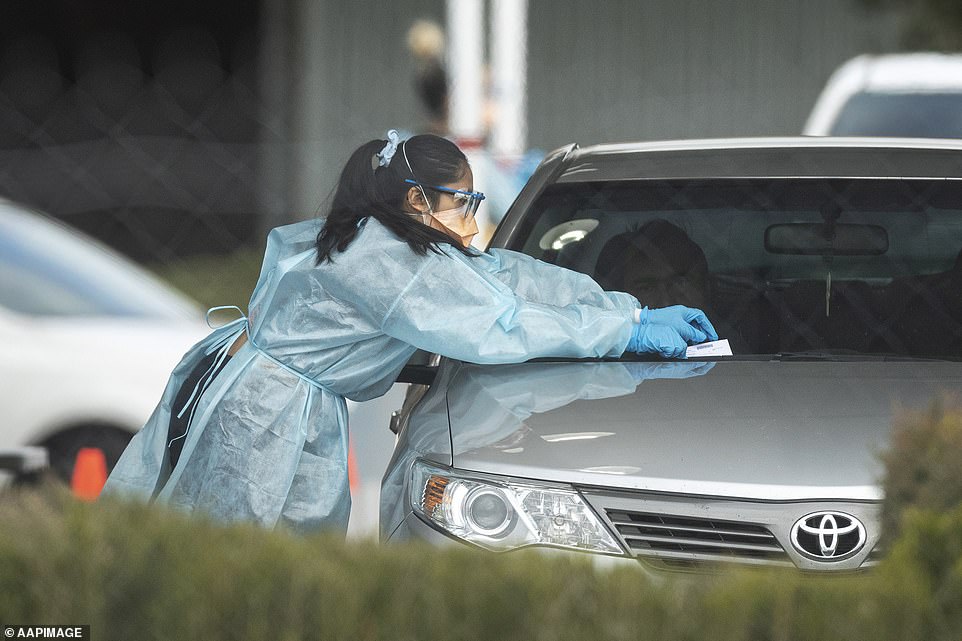 Cars are seen queueing up in a COVID-19 testing site at Craigieburn Health Service in Melbourne on Tuesday, June 23

On Tuesday, tensions were already on the rise in COVID-19 hot spots from Melbourne’s west to east.

At Brimbank Shopping Centre some worried shoppers were already stocking up on toilet paper, which had been pilfered from supermarkets just months earlier.

Reports spread quickly that a local shopping centre within the same municipality had already been stripped of the product.

He could later be heard calling family members telling them to stock-up as soon as possible.

Others worried when hoarders might start stock piling other products.

According to the latest statistics, the Victorian government is mostly concerned about the outbreak of cases in the areas of Hume (17 cases since the start of June), Brimbank (10), Casey (7), Darebin (6), Moreland (6) and Cardinia (6).

It comes amid concerns the rise of coronavirus in ­Melbourne’s outer suburbs in ethnic clusters is due to cultural confusion.

Ethnic Communities Council of Victoria chairman Eddie Micall­ef said there were certain pockets of migrant communities in the outer suburbs where a language barrier was an issue.

‘I think there was a little bit of complacency. I think the message started to get lost,’ Mr Micall­ef told The Australian.

At Brimbank Shopping Centre – a stone’s throw from where last week 15-year old Solomone Taufeulungaki was brutally killed – residents were scarce on the ground.

The grim-faced homicide detectives still pacing up and down the shopping centre stuck out like sore thumbs.

Dining tables remained draped in red and white tape to stop diners from congregating around them.

Not that there were many about on a cold Tuesday morning in Melbourne.

One group of older Australians seemed to care little about social distancing and instead jeered at a Daily Mail Australia photographer who snapped their picture. 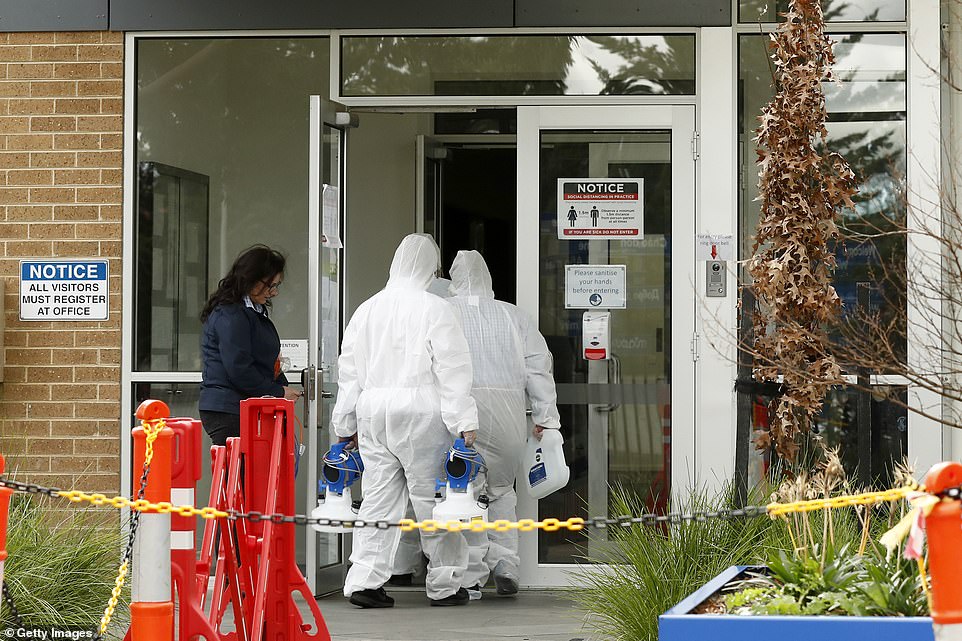 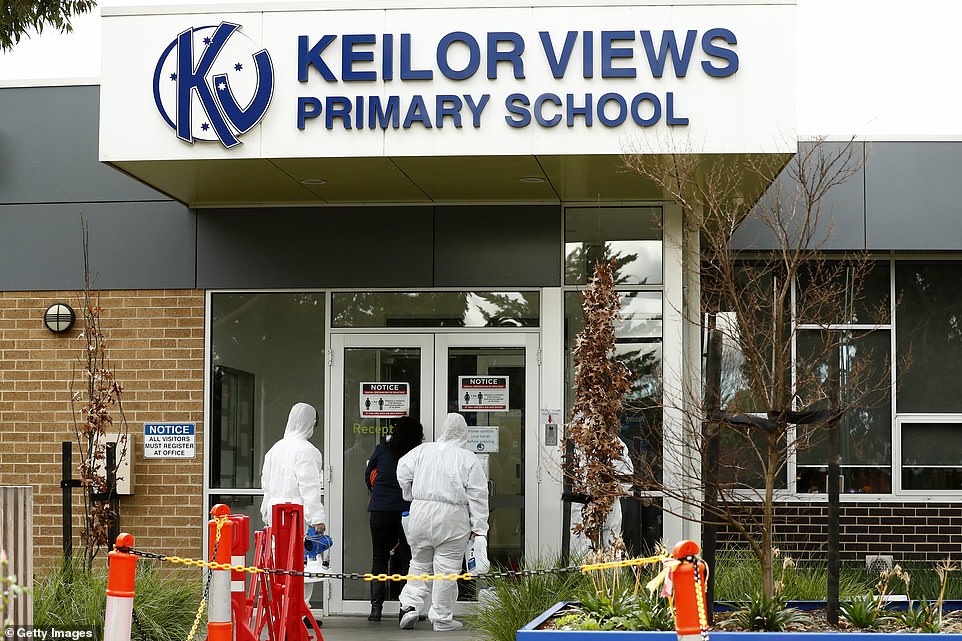 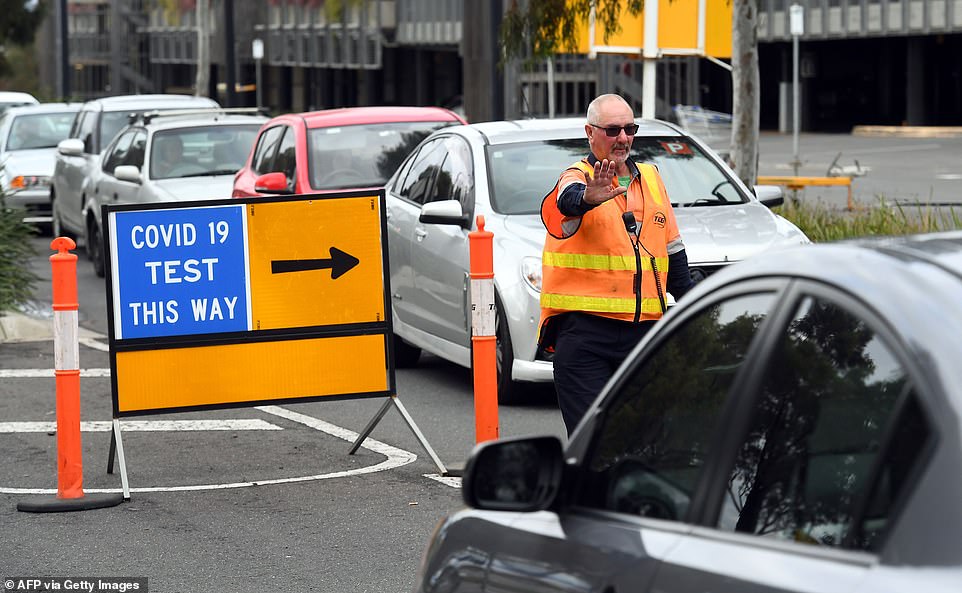 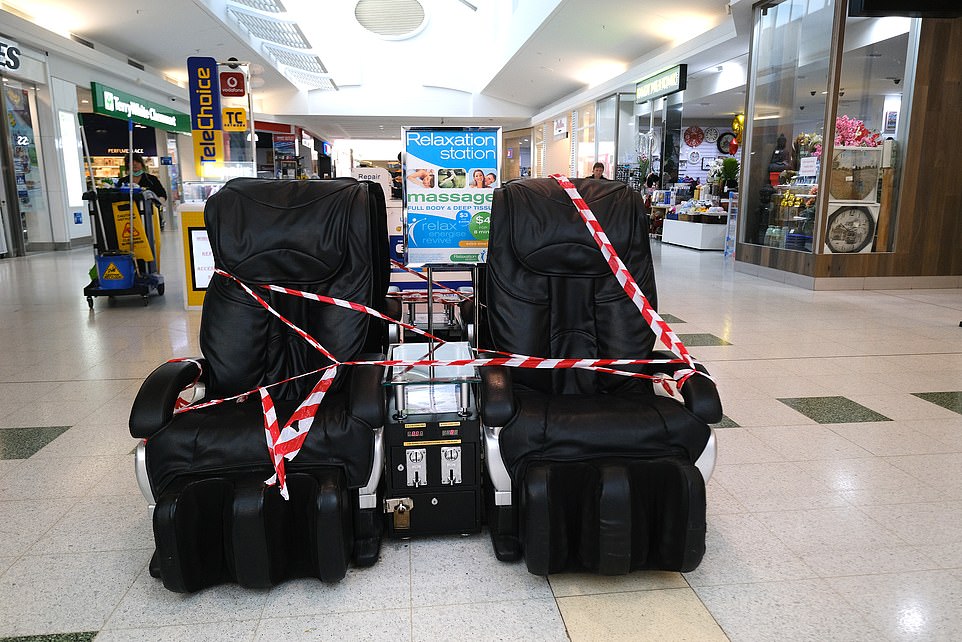 Shoppers hoping for a massage at Brimbank will have to get one at home, where they could be spending a whole lot more time 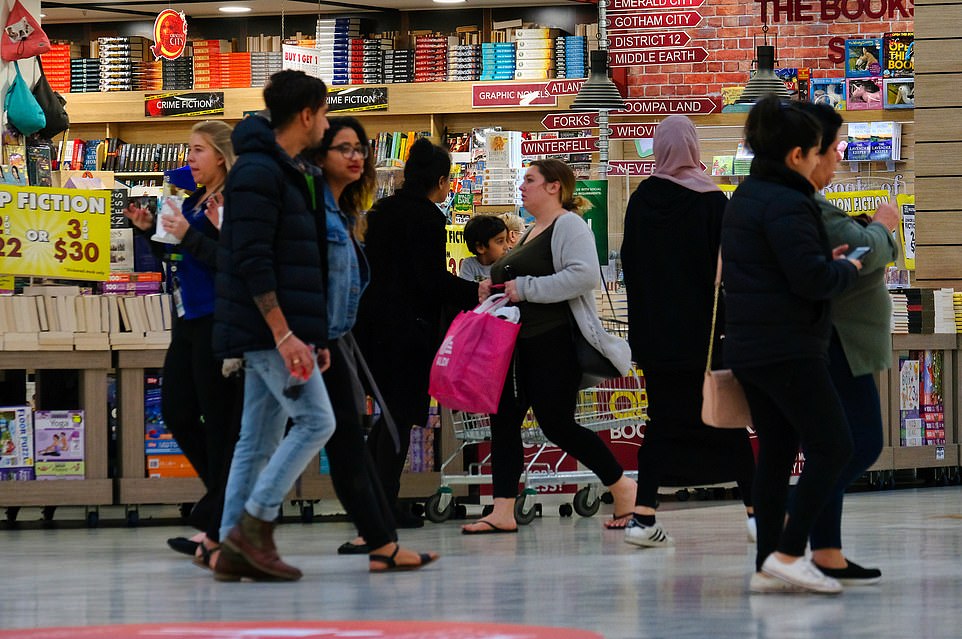 Broadmeadows Shopping Centre was bustling with activity on Tuesday 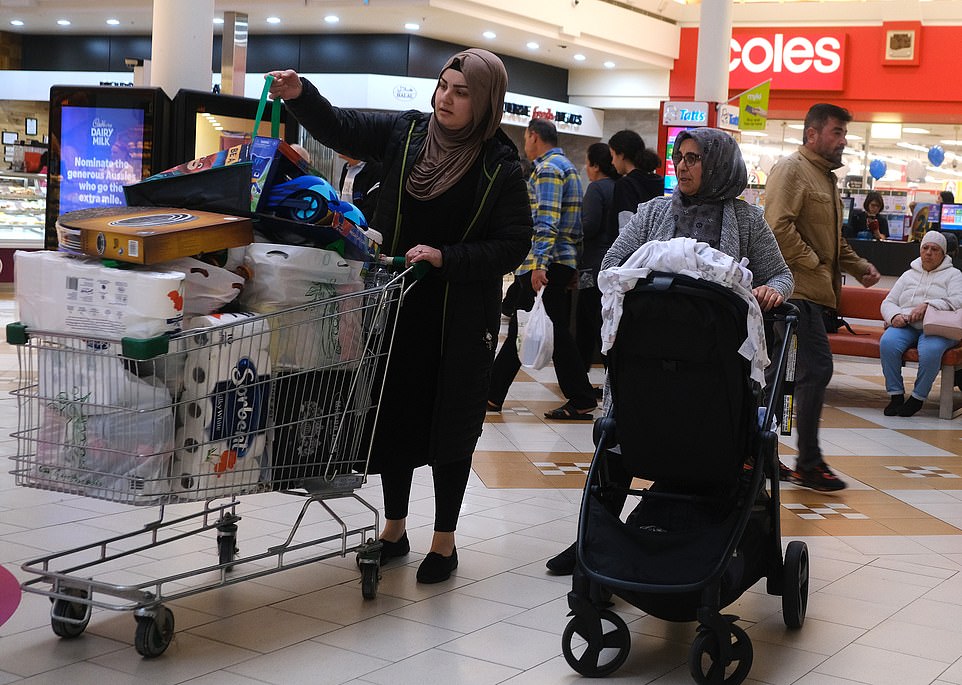 Those that were there and live in the area are angry that families have been blamed for Victoria’s COVID-19 woes and now face threat of a specific lockdown.

‘I’ve been here for 40 years,’ one older gentleman said. ‘Why didn’t they lock up that lot over in Toorak when they were spreading the virus about.’

Back in March, at the height of COVID-19 panic, it was revealed more than 100 of Victoria’s then 520 confirmed coronavirus cases were located in the upmarket suburb of Toorak and the seaside playground of Portsea around the homes of Melbourne’s rich and powerful.

Fast forward to last week where the state announced one person who already had the virus infected 11 family members after attending a family gathering in Keilor Downs in Melbourne’s north-west.

In a separate case of family transmission, another member of a family in the northern suburb of Coburg was confirmed to have the virus, bringing the number of infections in that family to 14 across multiple households.

On Saturday, Victoria scrapped plans to ease COVID-19 restrictions after another double-digit rise in new cases.

‘It is unacceptable that families anywhere in our state can, just because they want this to be over, pretend that it is,’ Premier Daniel Andrews said.

‘It is pretty clear that behind closed doors … they are not practising social distancing.’

Mr Andrews forcefully warned sick people against leaving their homes, saying just one person pretending everything is okay could infect many others.

‘It doesn’t matter how many people are doing the wrong thing – everybody, everybody will pay the price if we get to a point where restrictions either localised or across the state need to be re-introduced.’ 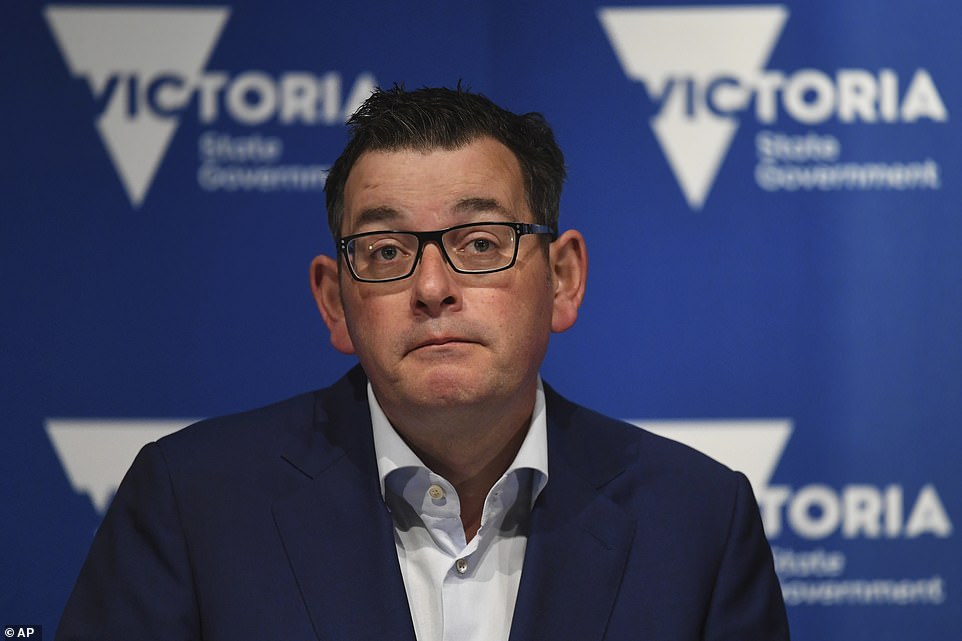 Victoria Premier Daniel Andrews warned sick people against leaving their homes, saying just one person pretending everything is okay could infect many others 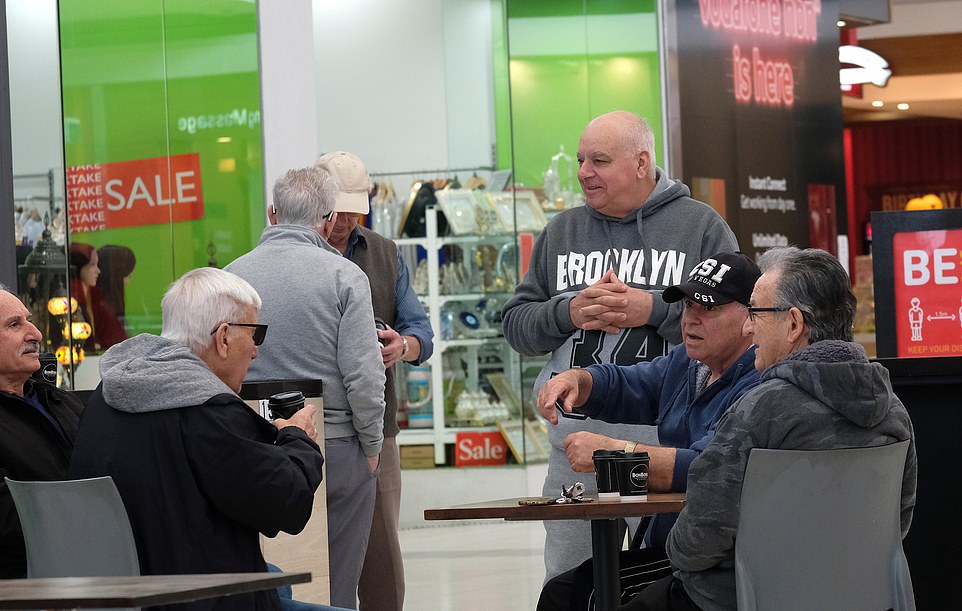 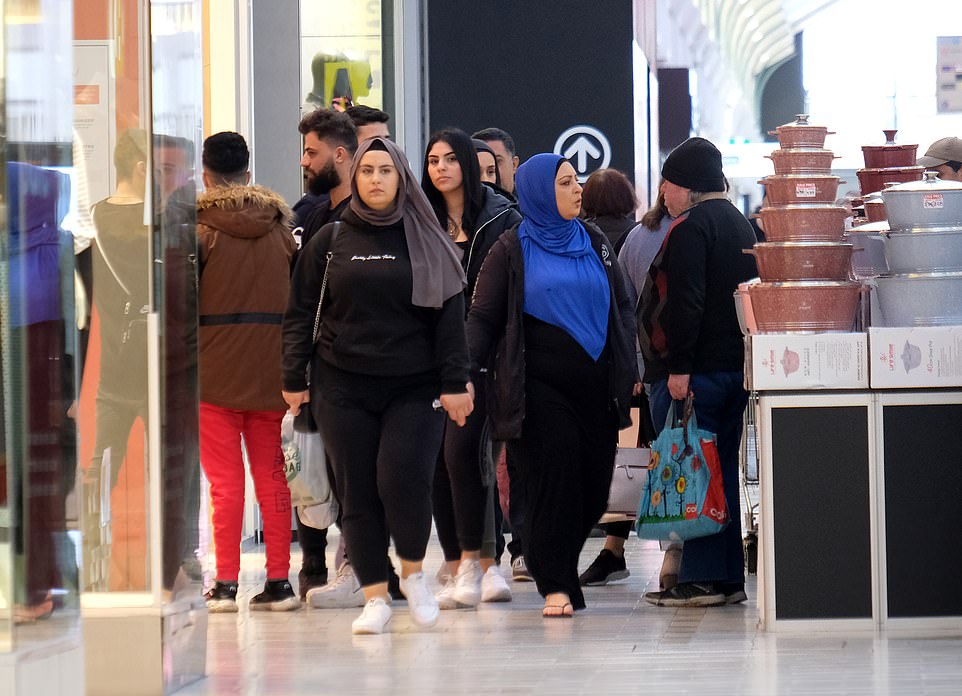 Families have been blamed for spreading the coronavirus in hot spots such as Hume, where shoppers gathered on Tuesday to get supplies 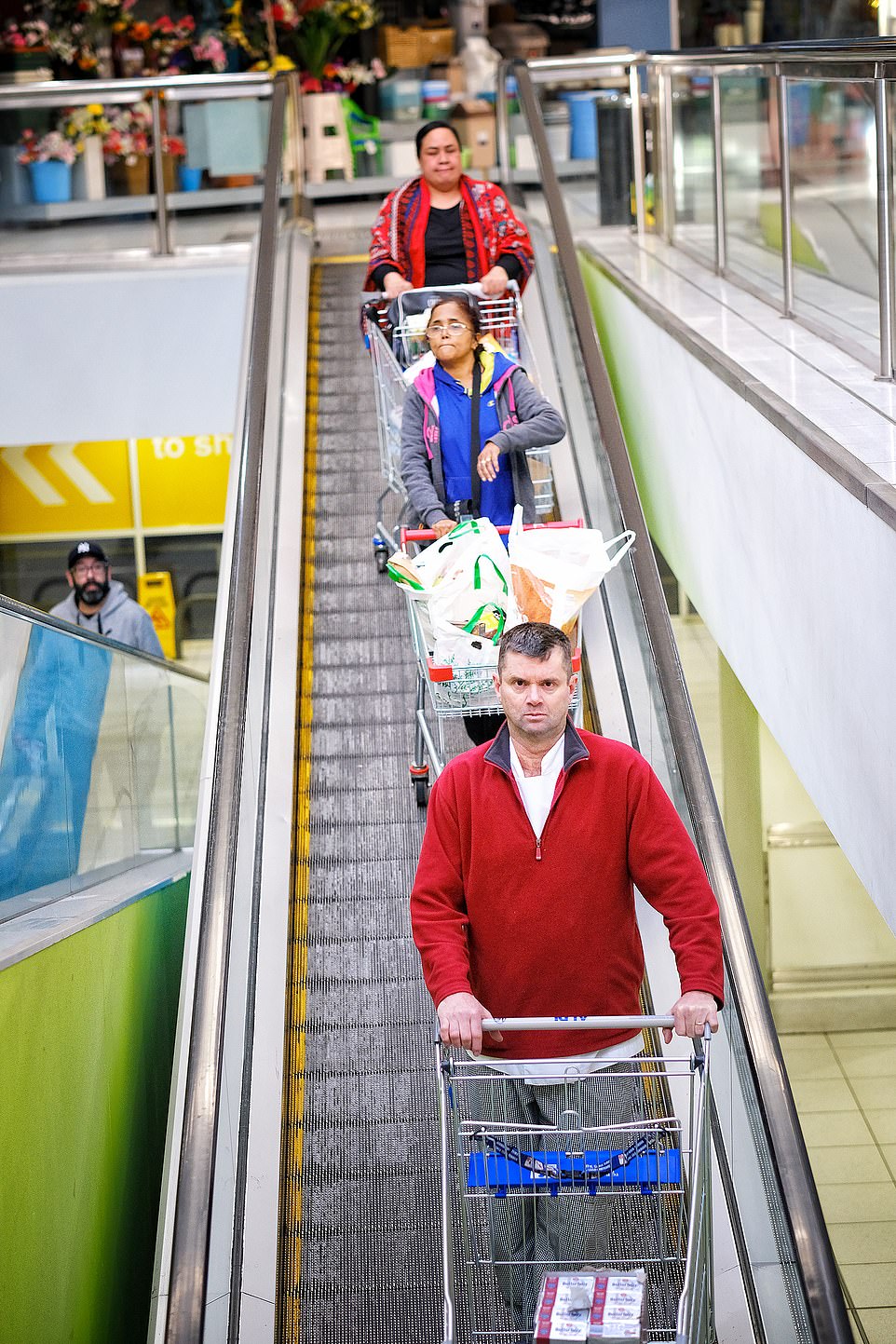 Over in Casey, shoppers could be seen buying groceries and very little of anything else

Further west, in Broadmeadows – another hot bed for COVID-19 – people appeared to be enjoying a last catch-up before lock down.

Shoppers mixed together and chatted among themselves as cafes bustled with activity – albeit at a safer distance.

Like their neighbours across the municipal border, shoppers could be seen loading up on gigantic packages of toilet paper.

Staples such as flour, pasta and rice remained on shelves, but by mid afternoon, word had hit mainstream national reports that stock piling was on the rise.

It was only last week that Victorian shoppers observed supermarkets were jam packed with toilet paper, with some reducing prices to as little as $1.50 for four rolls.

NSW Premier Gladys Berejiklian has called for businesses to steer clear of visitors from Melbourne amid an outbreak of COVID-19 cases in Victoria.

Victoria confirmed another 17 cases of coronavirus on Tuesday, taking to 193 the number of new diagnoses during the past nine days.

Ms Berejiklian has repeatedly criticised interstate travel restrictions and says she will not agree to border closures with any of NSW’s neighbour states.

But she has urged against travel to Melbourne, particularly its six current COVID-19 hotspots – the local government areas of Hume, Casey, Brimbank, Moreland, Cardinia and Darebin.

Residents of those hotspots should not be moving around the community, the premier said on Tuesday.

‘I call on all organisations not to interact with citizens from Melbourne at this stage,’ Ms Berejiklian told reporters.

‘Have activity elsewhere and I note a number of organisations have already taken on that advice.

‘And as for resorts and other locations in NSW, they are at liberty to accept or reject any traveller.’

NSW recorded just one COVID-19 case – in a returned traveller in hotel quarantine – in the 24 hours to 8pm on Monday from more than 8000 tests.

Some 3150 COVID-19 cases have been reported in NSW to date, with none in intensive care.

On Tuesday, the large stacks of toilet paper were beginning to show signs of a re-emergence of the disgraceful behaviour that plagued the country in March.

As lunch time rolled on, scores of people hit the shopping centre as shop keepers scrubbed surfaces and stuck up signs declaring how few people could actually enter their shops at any one time.

On the other side of town, in Melbourne’s east, Endeavour Hills Shopping Centre was hardly heaving.

The municipality of Casey sits just behind Brimbank in third place of recent COVID_19 hotspots.

As kids were knocking off school, the centre’s own hotspot was again the local supermarket.

Again, it was large slabs of toilet paper leaving in shopping trolleys.

Victoria was a state under siege from within itself and from across its borders.

South Australian Premier Steven Marshall said anyone wanting to travel into his state from Victoria would have to go through a pre-approval process.

Cops would be waiting for Victorians at the border. 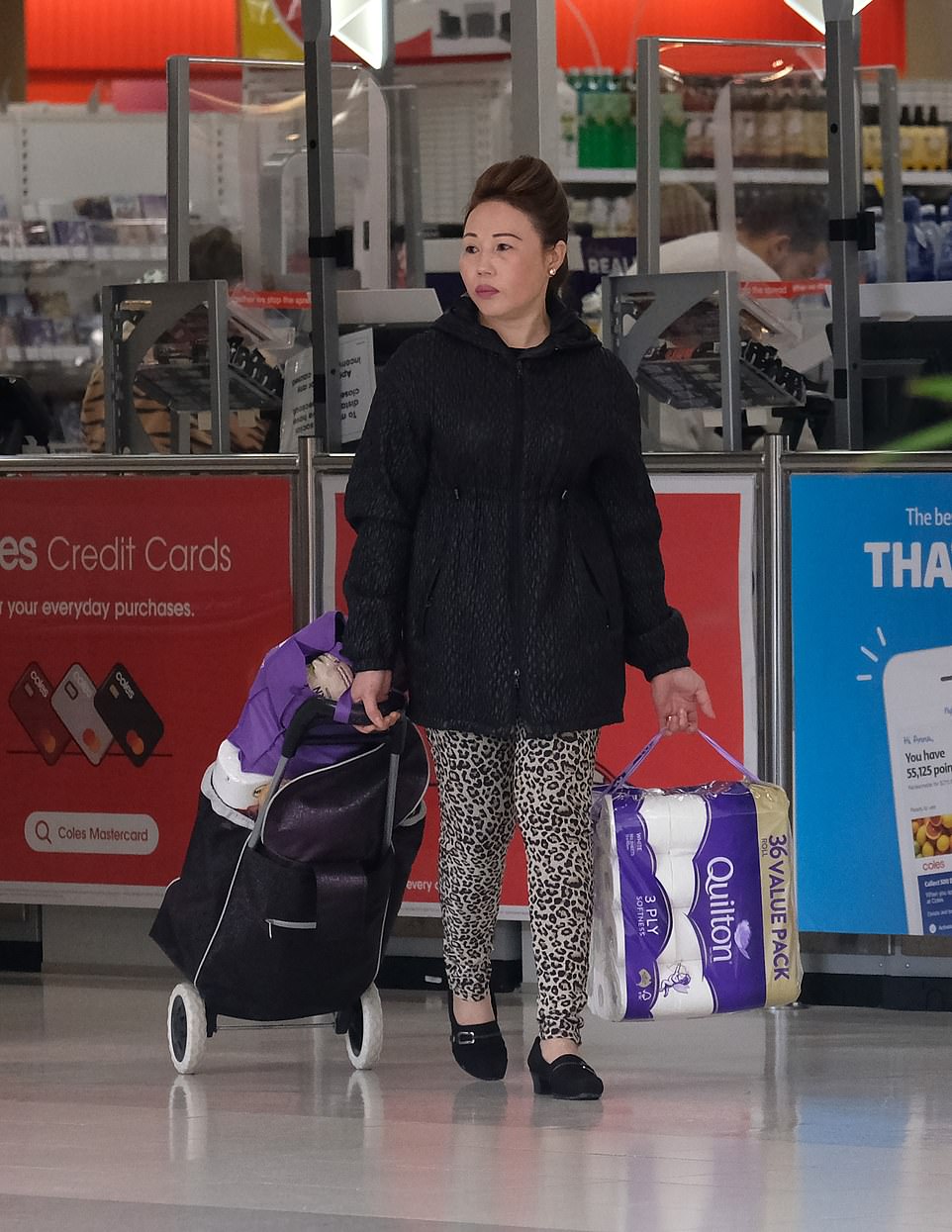 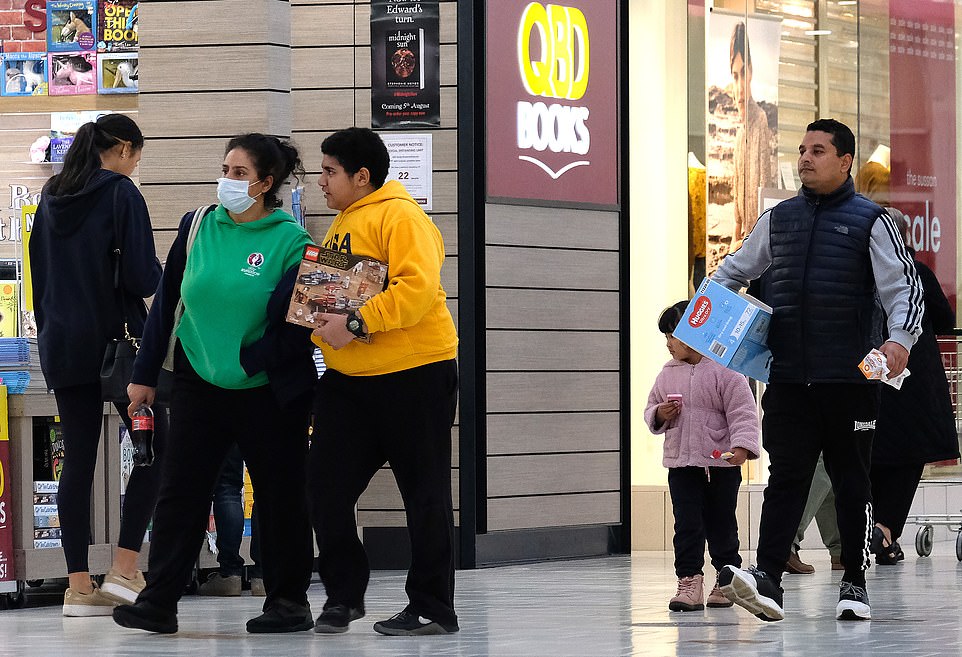 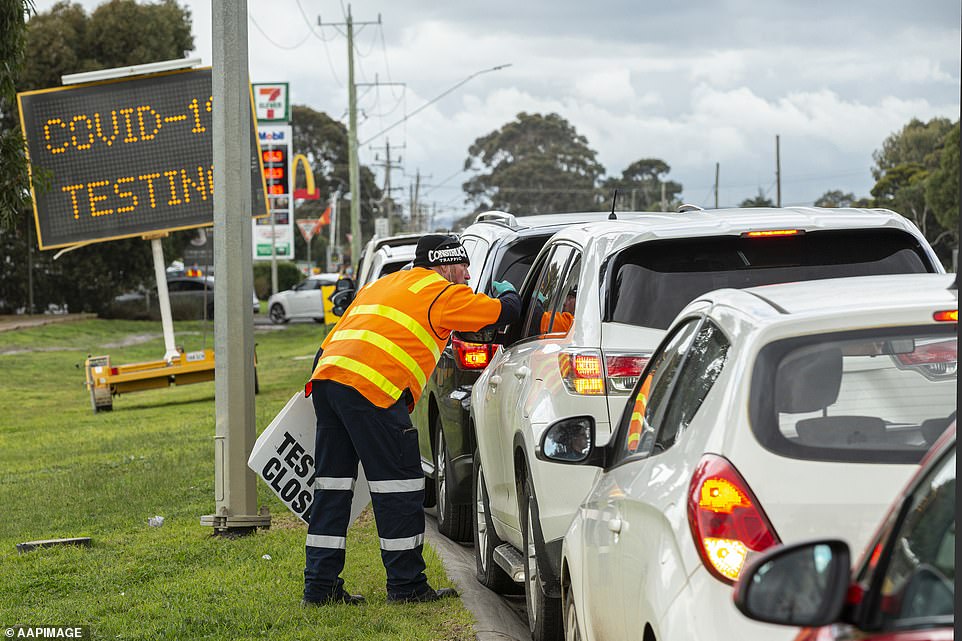 The NSW Premier urged people ‘not to interact with citizens from Melbourne’.

Victoria has opened new drive-in COVID testing sites and extended hours at others to meet demand.

But such was the demand on Tuesday that some had to close amid waits of up to four hours.

Back in ‘Broady’, one local summed-up his thoughts on the situation facing his own family.

‘They should be locking up Dan Andrews,’ he said. 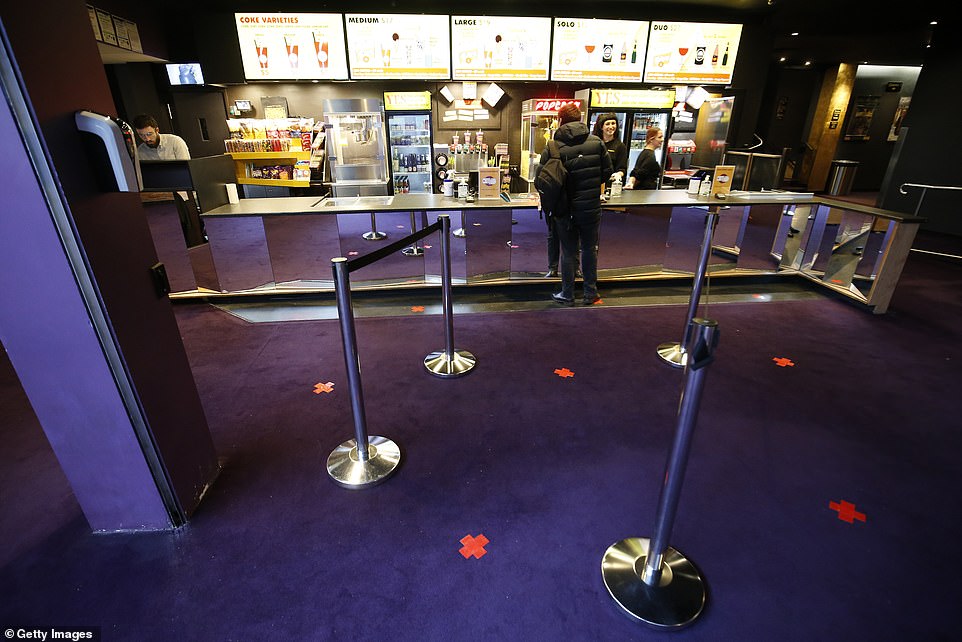 Socially distanced queues are seen at Cinema Nova in Carlton, Melbourne on Monday (pictured) but customers were few and far between as case numbers spike

Victorians are contemplating the prospect of tougher coronavirus lockdowns in some areas as other states go further than previously flagged in easing them.

Active cases in the state have more than doubled in a week with 17 new infections on Tuesday taking the total to more than 130.

By contrast, active cases in NSW have only risen by 22 over the past week, and fallen or remained at zero in every other state.

‘If we are able to maintain low levels and low numbers – when you think of it as five cases from undiagnosed sources yesterday – then I’m hopeful that we can avoid those lockdowns,’ he told ABC radio.

‘But we have to be absolutely clear: the rings of containment, the local actions are on the table.’

The origins of 11 of the 17 new Victorian cases are still being investigated.

Premier Daniel Andrews forcefully warned sick people against leaving their homes, saying just one person pretending everything is okay could infect many others. 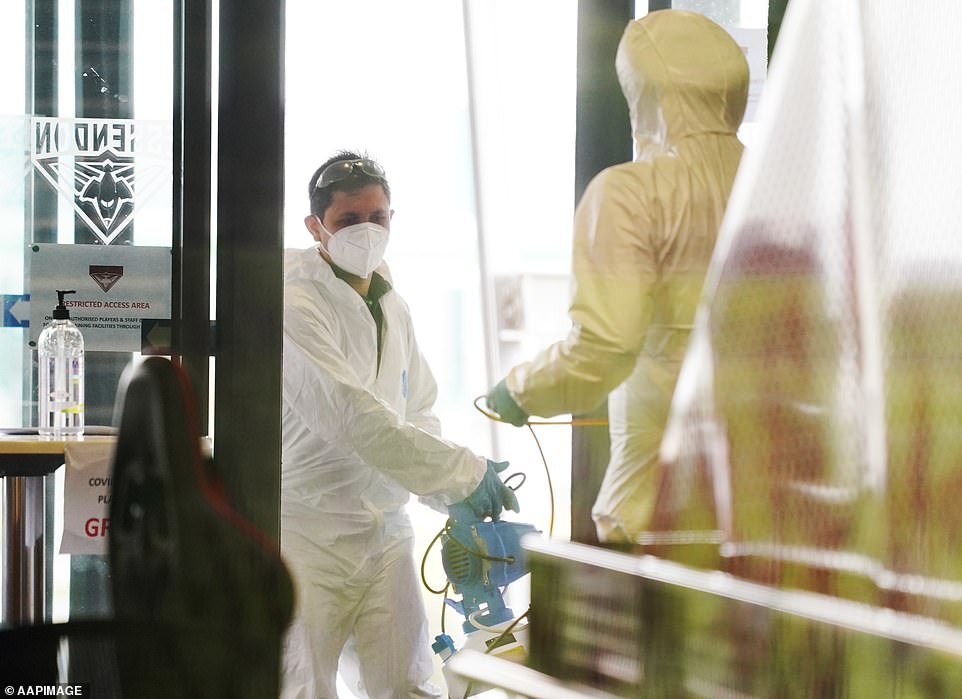 The national tally of cases is 7494, with close to 7000 recovered and 102 people have died. Pictured: Cleaners are seen working at The Hangar in Melbourne, Sunday, June 21 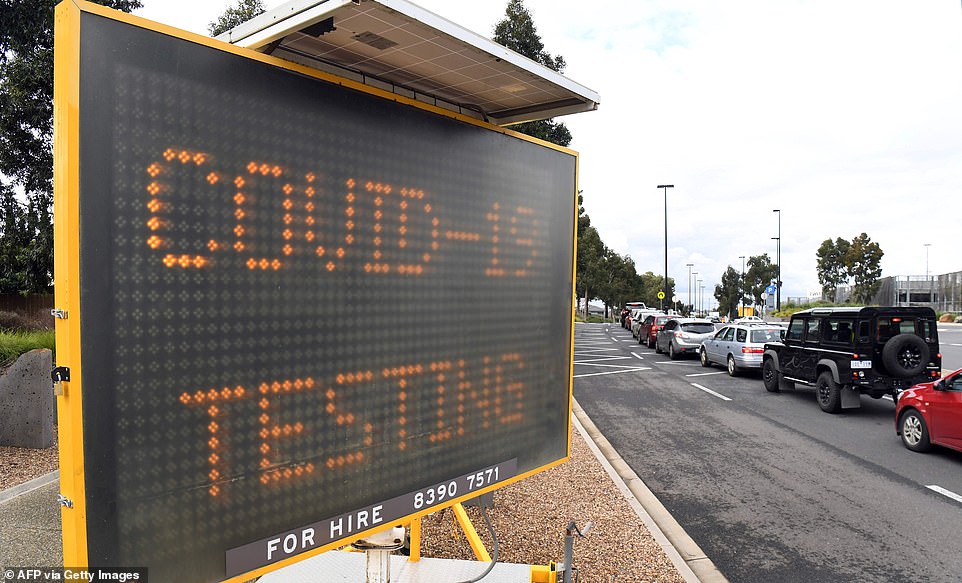 ‘It doesn’t matter how many people are doing the wrong thing – everybody, everybody will pay the price if we get to a point where restrictions either localised or across the state need to be re-introduced.’

The Victorian spike caused the Western Australian government to shelve plans to open its borders in August and sparked a warning by NSW against visiting Melbourne.

‘I call on all organisations not to interact with citizens from Melbourne at this stage,’ NSW Premier Gladys Berejiklian told reporters.

‘Anybody who lives in those hotspots in Melbourne should not be moving around at all.’

Meanwhile, South Australia will relax distancing requirements for pubs, bars, restaurants and other indoor venues from next week with one person allowed to every two square metres.

WA will do the same from Saturday.

At the moment, the rules in most places are four square metres per person.

WA recorded two new cases on Tuesday and NSW one, all returned travellers in quarantine.

It has been a month since the last recorded coronavirus death in Australia.