It was once one of the most glamorous brands in the world, known for its catwalk show of sexy, slender models, who would train for months to ensure they looked the part.

But after facing years of plummeting sales figures and ongoing backlash over its lack of diversity, Victoria’s Secret has finally succumbed to its critics by coming up with a new way of promoting the brand after its famed catwalk show was cancelled in 2019.

The lingerie giant has unveiled its new ‘diverse’ line-up of spokeswomen, which includes Priyanka Chopra Jonas and Megan Rapinoe.

Indian actress Priyanka, 38, who is married to singer Nick Jonas, and LGBT advocate and footballer Megan, 35, join a roster of other diverse ‘leading icons’ that have been recruited to ‘shape the future of the brand’, Page Six reported on Wednesday.

A source told the publication that the women won’t be posing in lingerie, but will ‘instead appear on a podcast and in marketing materials for the recovering brand.’ 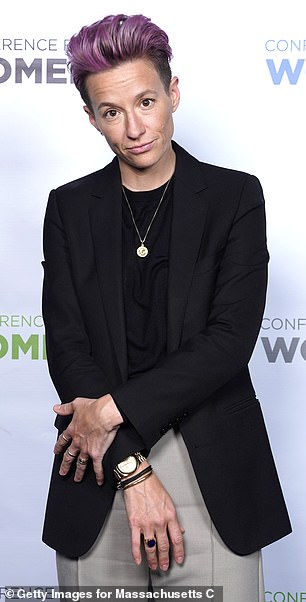 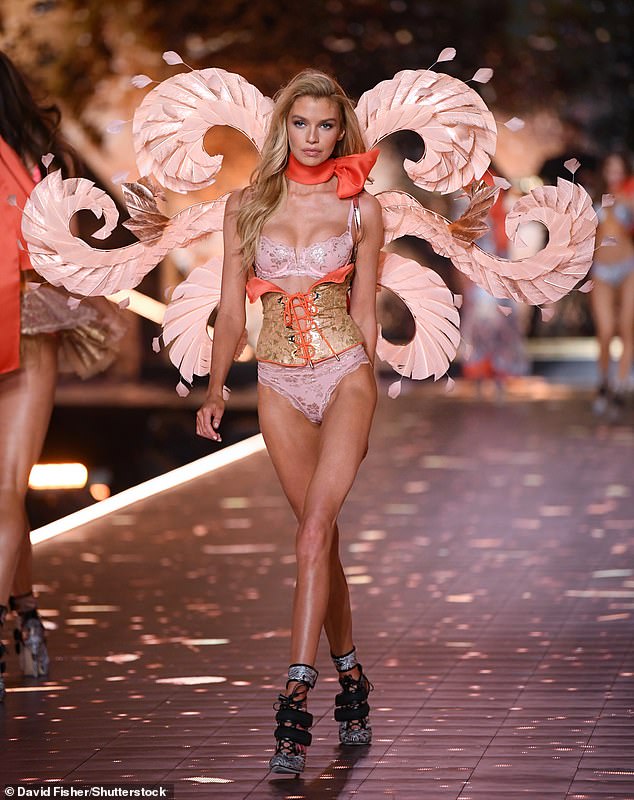 Angel: Traditionally, the brand has been promoted by a roster of high-profile supermodels, with those under contract to the brand known as ‘Angels’ (pictured: Stella Maxwell in 2018)

Traditionally, the brand has been promoted by a roster of high-profile supermodels, with those under contract to the brand known as Victoria’s Secret ‘Angels’.

Asked whether the Angels would make a comeback in the relaunch, brand chief executive Martin Waters said: ‘Right now, I don’t see it as being culturally relevant.’

Waters, who was appointed chief executive in February after serving as head of Victoria’s Secret’s international business, told the New York Times that the brand ‘needed to stop being about what men want and to be about what women want.’

Fallen Angels: How Victoria’s Secret went from a once global phenomenon and the lingerie of choice for the world’s biggest stars to a brand fighting to stay relevant

Victoria’s Secret was founded in 1977 by US businessman Roy Raymond, who set up a small chain of boudoir lingerie shops when he could find no man-friendly women’s stores.

In 1982 he sold the company to clothing magnate Les Wexner for $1million – a fraction of its current value. Raymond later committed suicide by jumping off the Golden Gate Bridge in San Francisco.

He chose the name Victoria after Queen Victoria, thinking it sounded refined, and added Secret to refer to what was hidden under the clothes.

Eventually, hundreds of stores opened coast to coast, but it was the glitzy launch of Victoria’s Secret’s first blatantly sexy catwalk show at the Plaza Hotel, New York in 1995 which made the difference.

Beginning: The first Victoria’s Secret Fashion Show was held at the Plaza Hotel in New York City in 1995 with models such as Angelika Kallio (left) and Leilani (right) walking the runway

Broadcast on network TV to 185 countries, millions tuned in to see supermodels Naomi Campbell, Helena Christensen, Tyra Banks and Karen Mulder – among others – stripped back to the barest of essentials.

Victoria’s Secret opened its first flagship store in London’s Bond Street in 2012, and staged its first catwalk show in 2014, featuring Ed Sheeran as star turn, but recent years have been more challenging.

Aside from a small rise in the first quarter in 2018, the lingerie retailer had falling sales every quarter since the fourth quarter in 2016.

The lingerie giant’s parent company, L Brands, confirmed in November 2019 that its famous show wouldn’t take place. The decision was part of a move to ‘evolve the messaging of [the company],’ Fortune reported at the time.

Famous faces: The show has featured some of the world’s most in-demand models over the years, including Bella Hadid in New York in 2018 (left) and Heidi Klum in Miami in 2008 (right) 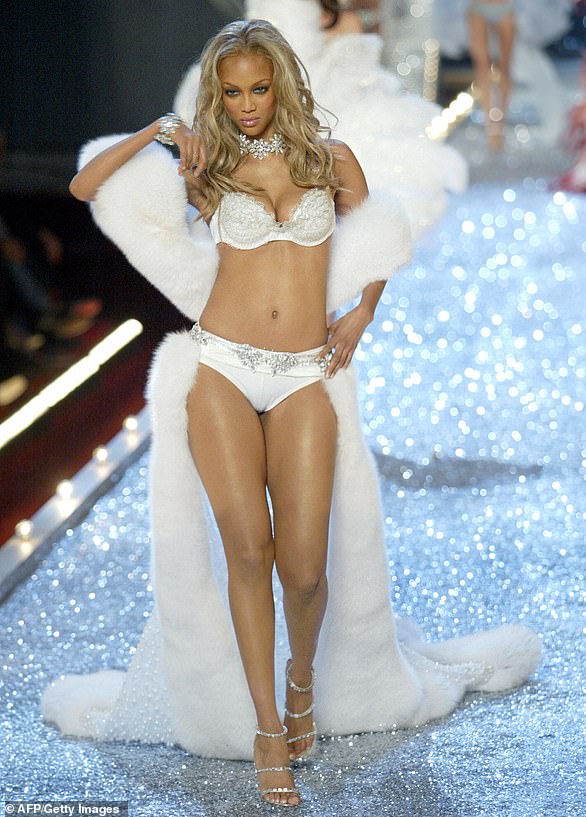 It came a year after marketing chief Ed Razek said the brand would not cast plus-sized or ‘transexual’ models because the show is a ‘fantasy.’

With consumers turning away from glamour towards comfort, plus a huge backlash following reports of Wexner’s historic friendship with disgraced financier Jeffery Epstein, Victoria’s Secret faced an identity crisis.

As well as a shift in public perception of the Victoria’s Secret Fashion Show, the brand faced a continued decline in sales.

Last year, the brand tried a new approach, posting photos on its Instagram account that promote neutral underwear in a variety of skin tones and using models from different ethnic backgrounds and showing size diversity.

However, some lingerie fans said the company’s bid to finally become more diverse was ‘too little, too late’ and accused the brand of ‘playing catch-up’.

In May 2020, parent company L Brands announced the closure of 250 stores in the US and Canada, after being impacted by the Covid-19 pandemic.

The closures represented nearly a quarter of Victoria’s Secret’s 1,091 locations in North America

He added: ‘I’ve known that we needed to change this brand for a long time, we just haven’t had the control of the company to be able to do it.’

Former chief executive Cynthia Fedus-Fields added that although it was ‘probably time for the Angels to go’ the brand had to find a way to ‘move forward while maintaining existing customers.’

She continued: ‘If it was a $7 billion business pre-Covid, and much of that $7 billion was built on this blatant sexy approach, be careful with what you’re doing’.

One of the brand’s newest recruits, Rapinoe is a vocal advocate for LGBTQIA+ rights, and works with the Gay, Lesbian & Straight Education Network (GLSEN) and Athlete Ally. 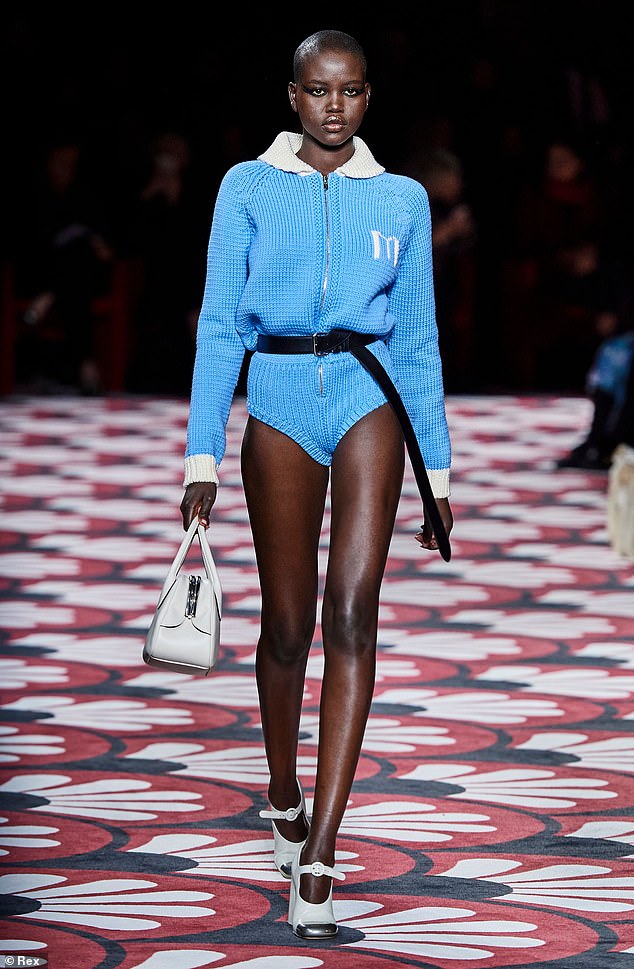 Striking: Sudanese-Australian model Adut Akech, 21, (pictured on the Miu Miu runway in 2020) will also be joining the line-up

The footballer has earned a host of awards and titles through her incredible career, and solidified her status as an activist when she knelt during the national anthem at an international match as an act of solidarity with Colin Kaepernick.

She, along with 27 of her US Women’s Soccer teammates sued the United States Soccer Federation in 2019 for gender discrimination in efforts to receive equal pay.

Speaking to the NYT, Rapinoe said the old Victoria’s Secret was ‘patriarchal, sexist, viewing not just what it meant to be sexy but what the clothes were trying to accomplish through a male lens and through what men desired.

‘And it was very much marketed toward younger women,’ which promoted a ‘really harmful’ message.

New recruits: Freestyle skier Eileen Gu (left) and journalist Amanda de Cadenet are set to host a 10-episode podcast where the women will share their stories

Meanwhile, a source told Page Six of the overhaul: ‘It’s a group of women inspiring change and positivity.

Another insider added: ‘[The Collective] is completely cause-driven… The idea is to create this community of outsiders looking in. It’s a new generation for the brand that is more about inclusivity.

‘And they [Victoria’s Secret] needed it if they wanted to stay afloat. The brand was stuck in an era that never evolved. It’s a different world now.’ 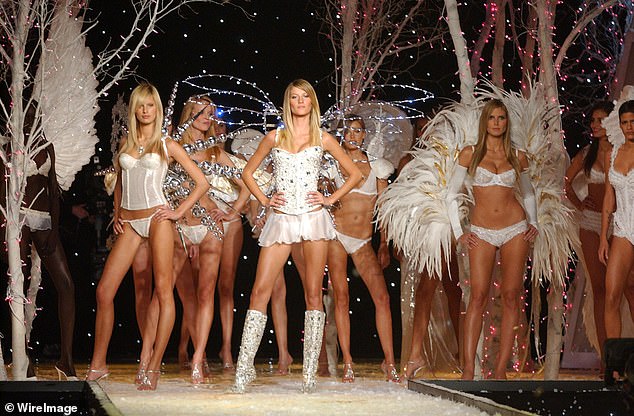 Cancelled: The annual Victoria’s Secret show (pictured in 2001) was cancelled in 2018 after the former chief marketing officer, Ed Razek, quit claiming the public wasn’t interested in seeing plus-size or transgender models on the catwalk

Former chief marketing officer, Ed Razek, left Victoria’s Secret in 2018 after claiming the public wasn’t interested in seeing plus-size or transgender models on the catwalk, admitting ‘The show is a fantasy.’

The day he left, trans model Valentina Sampaio shot her first campaign for the lingerie brand.

Following Razek’s comments the annual Victoria’s Secret Catwalk show, which began in 1995, was cancelled and has not returned since. 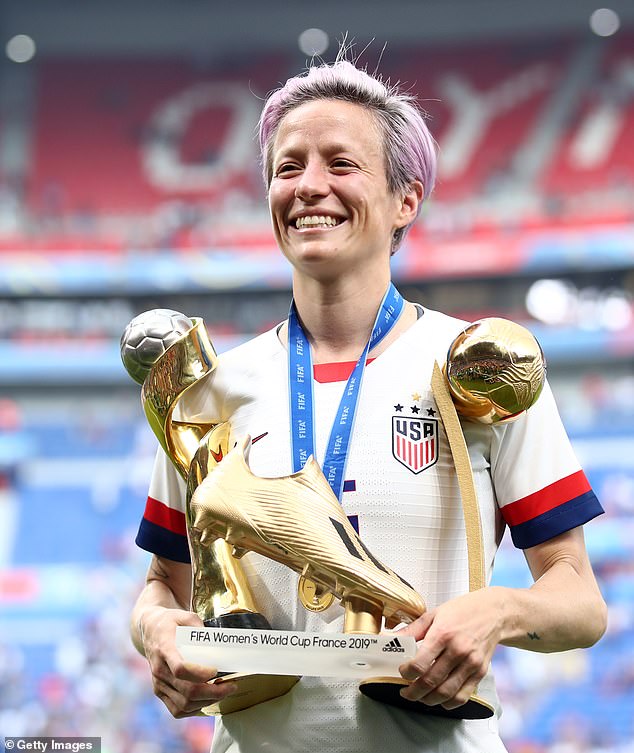 Champion: One of the brand’s newest recruits, Rapinoe is a vocal advocate for LGBTQIA+ rights, and works with the Gay, Lesbian & Straight Education Network (GLSEN) and Athlete Ally

For decades, Wexner was Epstein’s only publicly named client as a financial advisor, and the billionaire appears to be a key source of the $500 million fortune that Epstein left behind when he died in 2019.

A cloud of mystery has surrounded the two men’s relationship, and internal investigations commissioned by L Brands resulted in Wexner stepping down as CEO and then resigning from the board, though the findings were not made public.

Wexner has never been criminally accused of involvement in Epstein’s sex crimes, and despite rampant speculation, no evidence has emerged that the two men were romantically involved. 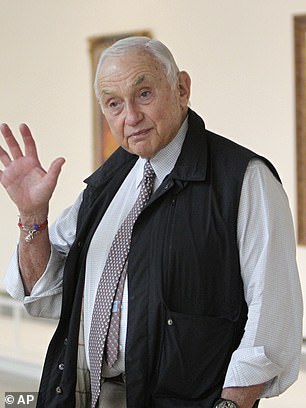 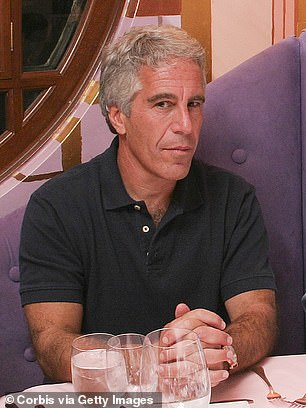 Last month, Wexner severed his last official ties with the L Brands, the retail giant that he founded in 1963, stepping down from the board after resigning as CEO.

Wexner, 83, along with his wife Abigail, did not stand for reelection to the board in May.

In January, L Brands shareholders filed a lawsuit alleging that the retail tycoon and his wife Abigail not only knew about Epstein’s conduct but allowed him to ‘use their home for liaisons with victims.’

It further claims that Wexner was so close to Epstein that he ‘knew or should have known’ that the dead pedophile was posing as a modeling recruiter for Victoria’s Secret to prey on aspiring young girls.

The bombshell allegations are part of a shareholder lawsuit brought against senior leadership at L Brands, the global fashion retailer. 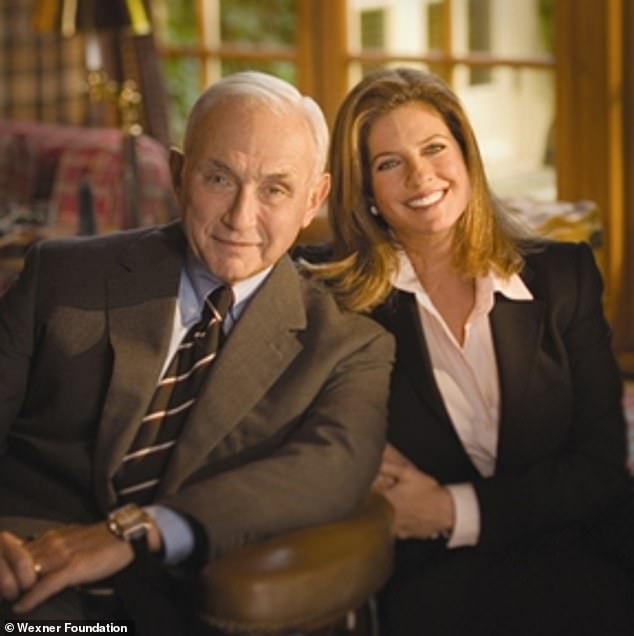 Stepped down: Wexner and his wife Abigail stepped down from the L Brands board in May, following lawsuits and questions about his financial relationship with Epstein