Victory in war on bank scams! New checks and alerts for customers announced

Banks have pledged to introduce new alerts and checks to prevent customers transferring their money to fraudsters.

The new code of conduct will require banks to flash up warnings if they are worried a customer is about to make a questionable transfer.

In a victory for the Mail’s campaign for greater protections for scam victims, the guidelines will also ensure banks have to make greater checks to ensure customers are paying who they think they are.

The code also makes clear that victims should be refunded even if the bank was not at fault – but there is still no agreement on who will cover the cost of this compensation, and consumer experts said last night the guidelines did not go far enough.

Under the proposed new rules announced today, banks will have to:

The rules are the result of eight months of work by a steering group of banks and consumer groups appointed by the Payment Systems Regulator. The group was set up after consumer group Which? raised a super-complaint about the lack of protection against so-called authorised push payment scams, where customer are tricked into transferring cash to conmen posing as their bank or the police.

Most victims of this type of fraud do not get their money back, because banks argue that because the customer gave permission for the payment to go through, they should not have to repay them.

But experts argue that most of these scams are so sophisticated, even the smartest of people are at risk of falling for them.

In the first six months of this year alone, about £145 million was lost to push payment fraud, of which only £31 million was refunded.

The new code of conduct will be voluntary but most banks are expected to sign up when it is finalised at the start of next year, with some pledging to begin introducing some of the new measures immediately.

It states that banks must provide customers with ‘effective information at key stages during the payment journey’. This might mean that when a customer logs into their online account to make a payment, a message would flash up warning that they should not proceed if they have been contacted by someone claiming to be from the police or they risk losing their money.

Or if they are transferring money to a retailer a message, may flash up urging the customer to consider a different payment option, such as a credit card, where they would have redress if something goes wrong.

Under the new rules banks must also introduce a vital check called ‘confirmation of payee’.

This means the bank must check the name the customer gives as the payee against the account details. 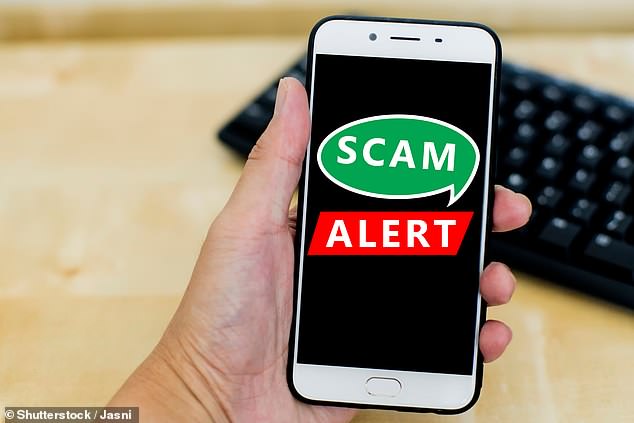 In the first six months of this year alone, about £145 million was lost to push payment fraud, of which only £31 million was refunded (stock image)

So if, for example, someone writes HMRC as the payee name and the account actually belongs to Joe Bloggs, they can alert the customer that they are not paying who they think they are.

Though not part of the actual code, it was also suggested that banks allow customers to request a delay of up to 72 hours on payments after the instruction is given. This would give vulnerable customers time to come out of the ‘hot state’ created by the criminal and to speak to a trusted friend or relative.

Under the new rules, banks must make a decision on refunds within 15 working days. They also require banks to refund customers they have assessed as being vulnerable and to raise awareness of scams and educate their customers.

The new code of conduct is a great step forward for the Mail’s campaign, but it was criticised last night for failing to go far enough because the new rules do not come into force until next year, it is not yet clear who will police them and until a decision is made about who will cover the cost of refunding victims, no one will get their money back.

Jenni Allen, managing director of Which? Money, said: ‘Recognition, at long last, that customers who lose money to this type of scam through no fault of their own should be reimbursed is a significant win for consumers.

‘But it’s simply unacceptable that in cases where banks claim they could not have done anything more, it will still be the victim who is left to bear the cost. Urgent action is needed to address this injustice.

‘The new code will only be judged a success when banks’ actions to protect their customers result in fewer scams, and those targeted by these sophisticated criminals are treated fairly and reimbursed swiftly.’ Caroline Abrahams, charity director at Age UK, added: ‘Age UK welcomes the real progress made so far… but is disappointed that there is no agreement yet on what happens if neither the bank nor the customer is to blame, so that in these cases consumers will continue to pick up the cost.

‘Age UK is anxious that the steering group urgently finds a solution to this fundamental problem.’

Ros Altmann, former pensions minister and champion for older workers, said: ‘The Daily Mail’s brilliant campaign seems to have produced a change of attitude by the banks. But action is needed urgently, with clear commitments as to how customers will be compensated.’

Stephen Jones, chief executive of UK Finance, said: ‘It is vital that we get the right outcome for customers and prevent the UK from inadvertently becoming a magnet for fraudsters, while ensuring innocent victims and customers are not penalised for the criminal actions of others.’

Hannah Nixon, of the Payment Systems Regulator, said: ‘Today’s publication and consultation is a positive step forward. There’s still some important work for the steering group to do, but we are fully supportive of the positive outcomes that the code is designed to deliver.’