A new chest-mounted video camera and vibrating wristband system could reduce collisions for visually-impaired people by 37 per cent, its developers claim.

A new study showed that the device works for blind people, visually impaired people and those using a long cane or guide dog compared to mobility aids alone.

There are about 360,000 people in the UK registered as blind or partially sighted, according to the NHS, with long canes and guide dogs the most common aides.

People who have visual impairments are at a significantly higher risk for collisions and falls, say the team from Mass General Brigham in Boston, Massachusetts.

While some electronic devices are marketed direct-to-consumer claiming to warn wearers of surrounding objects, there has been little evidence of their effectiveness in actual daily mobility settings, until now.

The team discovered that a chest-mounted, early warning device could reduce collisions and falls by up to 37 per cent in those with visual impairments.

This is one of the first randomised-controlled trials to look at the potential benefit of the devices at home and outside of a controlled lab environment.

A close-up of the image processing unit of the wearable collision device. A new study showed that the device works for blind people, visually impaired people and those using a long cane or guide dog compared to mobility aids alone

‘Independent travel is an essential part of daily life for many people who are visually impaired, but they face a greater risk of bumping into obstacles when they walk on their own,’ said Gang Luo, study author.

‘Although many blind individuals use long canes to detect obstacles, collision risks are not completely eliminated,’ said Luo, who is also an associate professor of ophthalmology at Harvard Medical School.

‘We sought to develop and test a device that can augment these everyday mobility aids, further improving their safety.’

The experimental device, and data recording unit were enclosed in a sling backpack with a chest-mounted, wide-angle camera on the strap, and two Bluetooth-connected wristbands worn by the user.

The camera is connected to a processing unit that captures images and analyses collision risk based on the relative movement of incoming and surrounding objects in the camera’s field of view.

If an imminent collision is detected on the left or right side, the corresponding wristband will vibrate; a head-on collision will cause both wristbands to vibrate.

Unlike other devices that simply warn of nearby objects whether or not a user is moving toward the objects, this device analyses relative motion.

It only warns of approaching obstacles that pose a collision risk, and ignoring objects not on a collision course.

The new study included 31 blind and visually impaired adults who use either a long cane or guide dog (or both) to aid their daily mobility.

After being trained to use the device, they used it for about a month at home in conjunction with their typical mobility device.

It had been set to randomly switch between active mode, in which the users could receive vibrating alerts for imminent collisions, and silent mode, in which the device still processed and recorded images, but did not give users any collision warnings

The silent mode is equivalent to the placebo condition in many clinical trials. 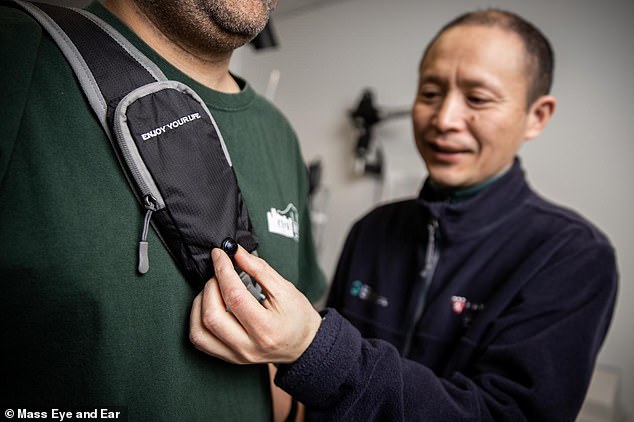 Gang Luo, PhD, displays the camera on the strap of wearable collision device. The camera is connected to a processing unit that captures images and analyses collision risk based on the relative movement of incoming and surrounding objects

Vision loss in premature babies and diabetes caused by excess blood vessels could be a thing of the past thanks to a chemical ‘off switch’ found by scientists.

Researchers from the Oklahoma Medical Research Foundation analysed sets of blood vessels that naturally regress and disappear in mice soon after birth.

They found that levels of a cellular protein crashed when mice experienced normal blood vessel loss in the eyes – this protein is also present in humans.

The team say disabling these proteins could act as an ‘off switch’ to reverse vision loss and eye disorders that are common in premature infants and adults.

‘Potentially, even patients with advanced disease progression could see their fortunes turned around,’ said Courtney Griffin, the senior author of the study.

The wearers and researchers would not know when the device modes changed during the testing and analysis.

The effectiveness of the device was evaluated by comparing collision incidents that occurred during active and silent modes.

The study found that the collision frequency in active mode was 37 per cent less than that in silent mode.

Long canes are one of the most effective and affordable mobility tools for a person who is blind or visually impaired, but they have limitations.

Canes primarily detect hazards on the ground that are within reach; however, hazards above ground level are often missed.

Additionally, the range of long cane sweeping can be restricted in busy environments, such as cities, in order avoid hitting nearby pedestrians.

Guide dogs are highly effective, but hard to come by and cost-prohibitive for many, as training a guide dog typically costs $45,000-$60,000.

Alex Bowers, PhD, a clinical researcher and one of the co-authors of the paper, said the video recording from the study also provides rich data about daily life mobility of people with visual impairments.

This can, in turn help researchers better understand the challenges of collision detection for people with visual impairments.

‘Long canes are still very helpful and cost-effective tools that work well in many situations, but we hope a wearable device like this can fill in the gaps that the cane might miss,’ Dr Bowers said.

Adding it would provide a more affordable, easier to obtain option than a guide dog.

Next, they hope to leverage ongoing improvements in mobile processing power and cameras to make the device smaller and more cosmetically appealing.

With additional funding, the team hopes that such a device could be submitted to the US Food and Drug Administration for approval so that it could be commercially available for people with low vision.

The findings have been published in the journal JAMA Ophthalmology.

A cure for blindness? Man, 58, who started losing his sight 40 YEARS ago has his vision partially restored by pioneering genetic treatment that pulses light into the eyes

A blind man who started losing his sight 40 years ago has had his vision partially restored in an eye thanks to a novel genetic treatment and a special pair of goggles.

The therapy worked by genetically modifying cells in one of the patient’s eyes so that they responded to pulses of light delivered via a special pair of goggles.

A camera on the goggles translated a view of the real world into amber light pulses, from which the man could recognise, count and locate objects in front of him.

However, the regained vision appears as black-and-white — and is not detailed enough, for example, to read a book or recognise another person’s face.

The 58-year-old from Brittany, France, lost his vision to retinitis pigmentosa (RP), a disease that causes the light-sensitive cells in the eye to gradually stop working.

RP is the most common inherited eye condition and, in the United Kingdom, is estimated to affect around one in every 4,000 people.

Until now, the sole approved treatment for RP was a type of gene-replacement therapy that was only known to work in an early form of the disease.

The team said the optogenetic therapy may be helpful in restoring vision to patients with RP-related blindness, but more studies are needed to explore its effectiveness.

However, such a treatment could be publicly available in five years, they claimed.