VIDEO: Fire crews rescue teen who was stuck in a Chick-fil-A high chair for 90 minutes after dare

Hilarious moment half a dozen firefighters rescue Idaho girl, 15, who got stuck in a Chick-fil-A high chair for 90 minutes after friends dared her to squeeze in

This is the hilarious moment fire crews rescued a 15-year-old girl from a high chair at a Chick-fil-A restaurant in Idaho, after she climbed in to prove to her friends that she could fit.

Addison Trent is seen on video trying to shimmy her way out of the seat designed for children up to two years old, before emergency responders arrived ready to use a chainsaw to remove her.

Friends advised the girl – who was dressed as a cowboy – to lie on the ground and wriggle out or run and jump out, as they captured the 90-minute panic on camera from 9.30pm on Tuesday.

They also attempted to pull her out by her arms but with no luck, so the fast food branch decided to call the fire department after 45 minutes. 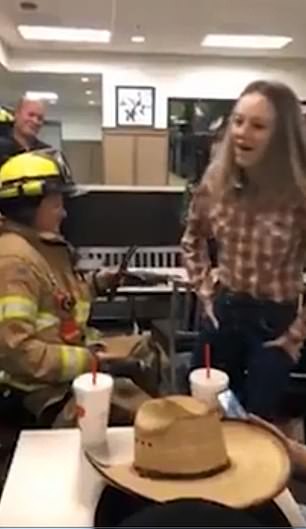 Addison Trent was stuck in a highchair from 9.30pm to 11pm on Tuesday. The teen climbed in to prove to school friends that she could fit the seat 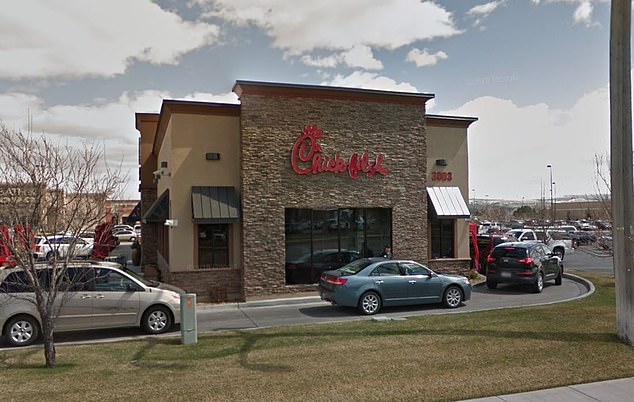 ‘They ate their meal and then dared one of the young ladies to see whether or not she could fit in a high chair,’ Ammon Battalion Chief Jesse Williams told EastIdahoNews.com.

‘She accepted the dare and was able to get in the chair but couldn’t get back out.’

The teen was still there at closing time after simply stopping by for chicken strips, waffle fries and a large Dr Pepper following her attendance at a basketball game involving Firth High School.

She happened to get trapped while dressed in a costume in keeping with a theme she and her classmates opted for as they watched their team take on Firth rivals Tenton High School. 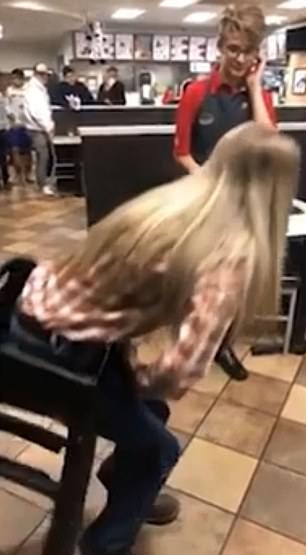 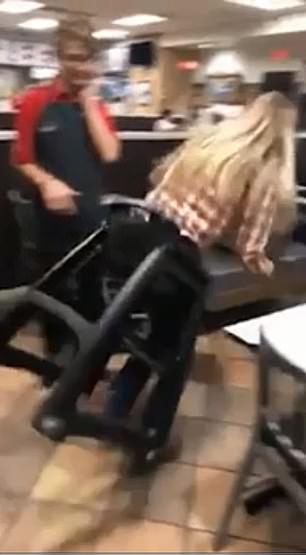 Friends tried to pull her arms and advised her to lie on the ground and wriggle out, or run and jump out but nothing worked after 45 minutes

‘When we got there, she was in high spirits but seemed a bit embarrassed,’ Williams continued.

‘Her friends were actively Snap-chatting and Instagramming because that’s what teenagers do.’

Luckily the fire department was able to dissemble the wooden structure without a chainsaw and Trent was freed around 11pm. Six team members appeared to be present in the video clip.

But the teen was still left sore and bruised after emerging from the chair estimated to hold up to 50lbs comfortably.

The department said it was an unusual call for them.

‘We were glad we were able to get her out of the high chair and not cause any damage and return all the equipment back to Chick-fil-A,’ Williams added.

‘I’ve done other extrications but this is the first of this type in my book.’ 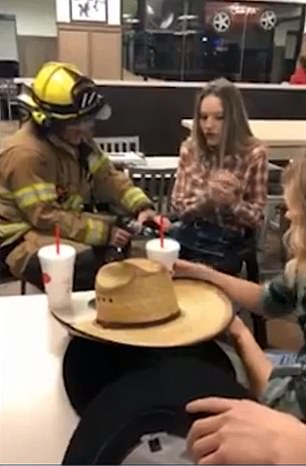 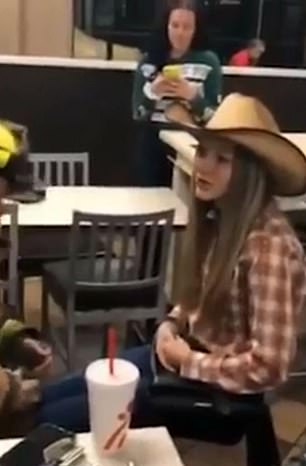 The restaurant called the fire department who considered using a chainsaw. But they were able to dissemble the wooden chair for children up to two years old

Trent’s mother said it was ‘a silly dare and could have been much worse’.

‘I promise you she is an amazing, smart, funny and beautiful 16-year-old girl who is accepting full responsibility for her actions,’ Liza Trent said.

‘You can’t be old and wise if you have never been young and crazy!’

However she noted the inconvenience and added as a consolation that her daughter ‘loves’ Chick-fil-A and may even apply for a job there.

‘She wants to thank the staff at Ammon Chick-fil-A and the Ammon Fire Department for their kindness and understanding in an unlikely situation,’ the mother added.

‘We are very thankful that the fire department was able to assist and that no one else was in need of their services at the time.’ 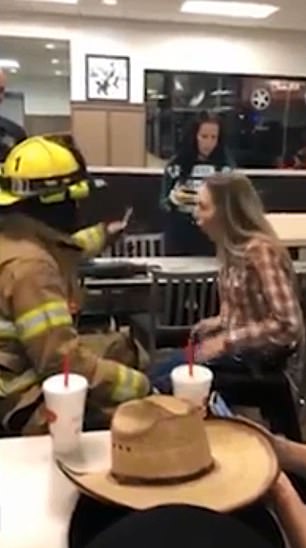 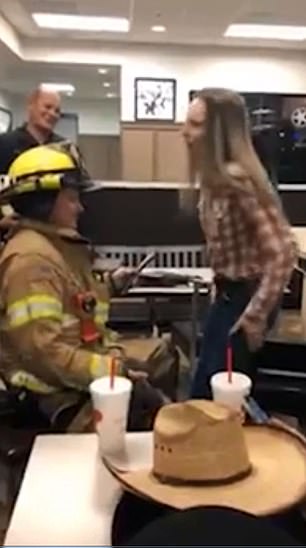 But the teen was still left sore and bruised after emerging from the chair estimated to hold up to 50lbs comfortably. Her mothe said: ‘We are very thankful that the fire department was able to assist and that no one else was in need of their services at the time’