A leading Jewish figure has told a court a YouTube video of a pet dog giving Nazi salutes was ‘grossly offensive’ and insisted the Holocaust should not be joked about.

Ephraim Borowski, 66, director of the Scottish Council of Jewish Communities (SCoJeC), blasted the clip and told how he lost members of his own family to the Nazis.

Mr Borowski was giving evidence against Mark Meechan, 29, who has denied claims of committing a hate crime.

Meechan, of Coatbridge, Lanarkshire, recorded his girlfriend’s pug, Buddha, responding to statements such as ‘gas the Jews’ and ‘Sieg Heil’ and put it on the popular video sharing website.

The director of the Scottish Council of Jewish Communities has slammed a YouTube video of a dog ‘saluting’ Adolf Hitler, filmed by Mark Meechan, who is charged with committing a hate crime over the footage 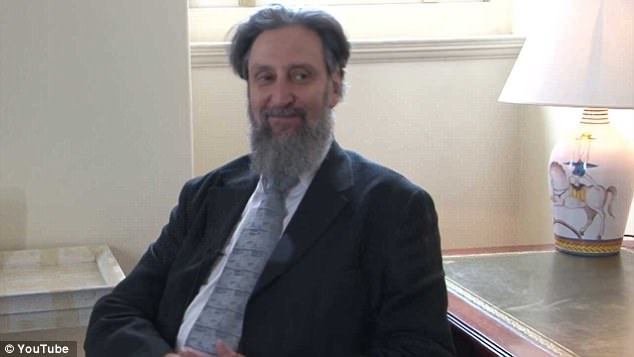 Ephraim Borowski, 66, pictured, said he was ‘stunned anyone thought the video was a joke’

After complaints were made about the content, police were called in and he was arrested for allegedly committing a hate crime by uploading the ‘M8 Yer Dugs a Nazi’ video in April last year.

He denies any wrong doing, insisting he only did it to annoy his girlfriend Suzanne Kelly, 29, and is on trial at Airdrie Sheriff Court.

Mr Borowski told the court he had family who died in the Holocaust which saw over six million Jews killed by Adolf Hitler’s Nazi regime.

He was shown the recording of the video in court and said: ‘It is grossly offensive, it stuns me that anyone should think it is a joke.

‘My immediate reaction is that there is a clear distinction to be made between an off-hand remark and the amount of effort that is required to train a dog like that, I actually feel sorry for the dog.

‘In many ways, the bit I found most offensive was the repetition of ‘gas the Jews’ rather than the dog itself.

‘The other thing that struck me was the explicit statement that this was intended to give offence and intended to be the most offensive thing he could think of and then he says he isn’t a racist but unfortunately we hear that all the time from people.

‘I’m no historian but it is the marching signal of the Nazi storm troopers who contributed and supported the murder of six million Jews including members of my own family and I take this all slightly personally. 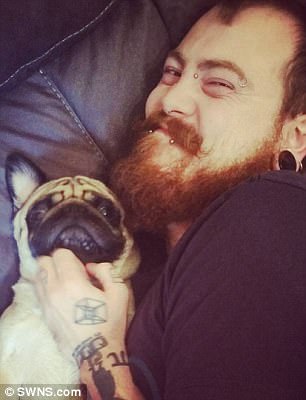 Mark Meechan, 29, recorded his girlfriend’s pug Buddha responding to statements such as ‘gas the Jews’ and ‘Sieg Heil’ and put it on the popular video sharing website

‘Material of this kind goes to normalise the anti-Semitic views that frankly we thought we had seen the last of.

‘The Holocaust is not a subject for jocular content.’

Mr Borowski also told the court sections of the Jewish community in Scotland felt threatened by the video’s contents and that the SCoJeC’s website was bombarded with abusive comments in the wake of it emerging.

He added: ‘The threat is against the Jewish community and there is an echo chamber effect with people trying to be more offensive.

‘160 pages of messages about this were collected by us in a day, they supported it and it was extremely anti-Semitic.

‘I did not find anything about the video humorous.

‘Repeating over and over and over again in a positive and enthusiastic tone of voice to ‘gas the Jews’ is what this trial is all about, an offensive video and whether it is offensive or threatening.’

Prosecutors allege Meechan communicated material that would cause fear and alarm and stir up hatred on religious grounds by posting a clip which was ‘anti-semitic in nature’ to YouTube.

He also faces an alternative charge of posting a video on social media and YouTube which was grossly offensive because it was ‘anti-Semitic and racist in nature’ and the prosecution claim it was aggravated by religious prejudice.

At the start of the clip he says: ‘My girlfriend is always ranting and raving about how cute and adorable her wee dog is so I thought I would turn him into the least cute thing I could think of which is a Nazi.’ 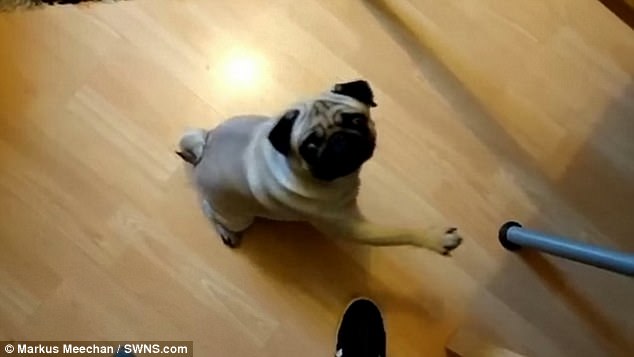 Meechan denies any wrongdoing over the video, pictured, and has gone on trial at Airdrie Sheriff Court

In the video the dog is seen perking up when it hears the statements and appears to lift its paw to the ‘Sieg Heil’ command in the video which has now been viewed over three million times.

It is also filmed watching a rally led by Hitler at the 1936 Olympic Games in Berlin.

The court has also seen a second video where Meechan apologised for any offence the clips caused.