Video of tick stuck in a patient’s ear

This stomach-churning footage shows a doctor removing a tick firmly embedded inside a patient’s ear.

It has emerged a day after former England rugby captain Matt Dawson revealed how a bite from an insect while he worked out in a London park left him fighting for his life.

The clip has left viewers online disgusted and worried amid warnings over an increase in disease-spreading tick numbers across Britain.

Ticks can cause Lyme disease, which former Strictly star Matt was eventually diagnosed with. It left the 44-year-old with an inflammation of the heart and needing surgery. 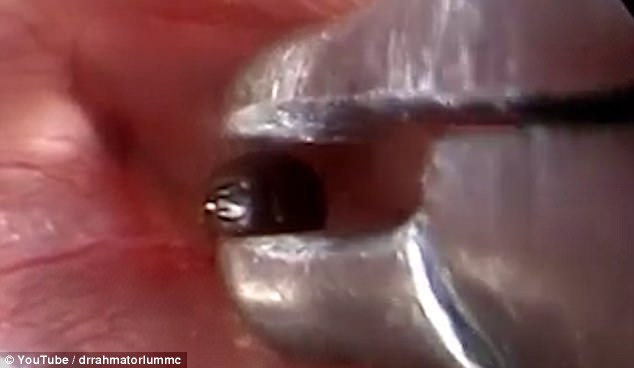 The doctor removes the stubborn creature safely with a surgical implement 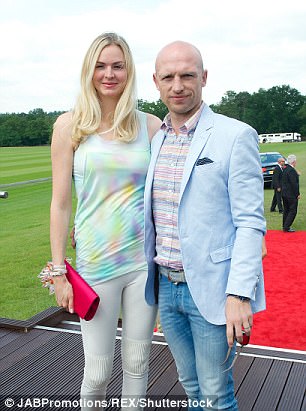 Rugby star Matt Dawson, 44, pictured with wife Carolin, developed a rash and fever after being bitten by a tick while  at a park in Chiswick in 2015

The video begins by showing a surgical camera being inserted into the unnamed patient’s ear canal.

As the picture comes into focus, you can see the gruesome sight of the creature latched onto the eardrum,

The doctor manages to detach the tick which is leeching blood from its host with a surgical implement.

Matt revealed how he developed the tell-tale rash, common with Lyme disease sufferers and a fever, two weeks after being bitten at a park in Chiswick, West London, in July 2015.

‘I felt awful,’ he said. ‘I had a splitting headache and could barely get off the couch. I ached all over.’

Two doctors dismissed his symptoms but blood tests eventually confirmed the condition. He was sent to the Royal Brompton Hospital in London and given antibiotics.

But the delay in his treatment had led to a complication called Lyme carditis, which means the bacteria carried by the tick had affected the heart muscles.

Matt underwent multiple heart operations and endured 18 months of treatment. His heart rate is now normal but he will need monitoring for the rest of his life.

He joins a host of celebrities who have spoken out about their battles with Lyme disease including Martine McCutcheon, Bella Hadid, and Avril Lavigne.

Fears of an epidemic

Experts warn the illness, spread by ticks infected with the bacteria Borrelia, could be officially classed as an epidemic within the next decade.

In England and Wales there are 3,000 confirmed cases of Lyme disease each year according to Public Health England.

Yet, charity Caudwell Lyme says the figure may be drastically higher at as many as 45,000.

The infection can lead to conditions such as meningitis or heart failure if left untreated and can even prove fatal.

Spotted quickly, Lyme disease is halted with antibiotics. But if left untreated for years, its impact can be devastating – in 25 per cent of cases, the nervous system is affected, causing numbness and memory problems.

Ticks are so small – often the size of a full stop on a page – that many people don’t realise they have been bitten.

Experts have warned that correct removal of attached ticks is extremely important as an incorrect method can result in the tick’s mouth parts being left behind, increasing the risk of disease transmission.

It is recommended to use a tick remover and to get them out as soon as possible, to lessen the chance of the bacteria taking hold.