The pictures, which were captured in Bushy Park, south west London, this week, shine a light on a lockdown litter scandal that has scarred green spaces.

The images of the fallow deer come against the background of a massive increase in littering, which has brought demands from some campaigners for an increase in fines from £100 per offence to as much as £1,000.

Two deer pick their way through a mound of litter left lying at the base of an overflowing bin in Bushy Park, south west London

They also make clear that the problem of littering extends beyond being just an eyesore and poses a threat to wildlife.

The images and video footage were captured by amateur wildlife photographer Sue Lindenberg, who received a huge reaction after posting the details on Twitter.

She wrote: ‘These deer are probably going to be really ill after this. So sad.

‘It is heart breaking seeing this in Bushy Park because folk are too lazy or thoughtless.

‘I know for a fact that the Royal Parks have employed more staff to cope with this increasing yet avoidable problem. They are running campaigns to address the problem – people have to be more responsible. 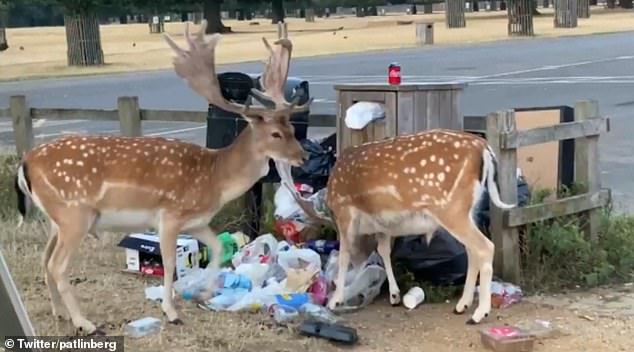 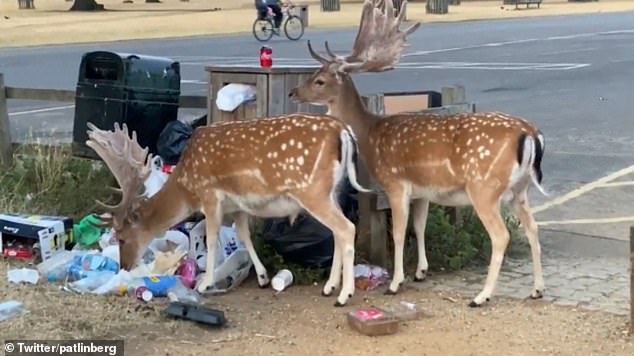 ‘One of those deer ate a load of plastic, I could weep.’

The hot weather at the weekend saw thousands flock to parks for family picnics, open air parties and barbecues. However, this led to a sea of waste, bags, cans and plastic bottles.

A spokesman for the Royal Parks complained wildlife are being put at risk from litter with the amount of rubbish left behind by visitors up by around a third on normal levels.

She said: ‘Shocking footage of wild deer feeding on dumped rubbish in Bushy Park reveals the harmful effects of left litter on wildlife.

‘Two fallow deer are seen seeking out and munching leftover food waste from plastic bags that have been stacked by bins.

‘Dumped litter presents a huge risk to wildlife which is attracted to picnic scraps and sadly can accidently eat plastic bags along with the food. The plastic can block their digestive system causing a lingering death from starvation.’ 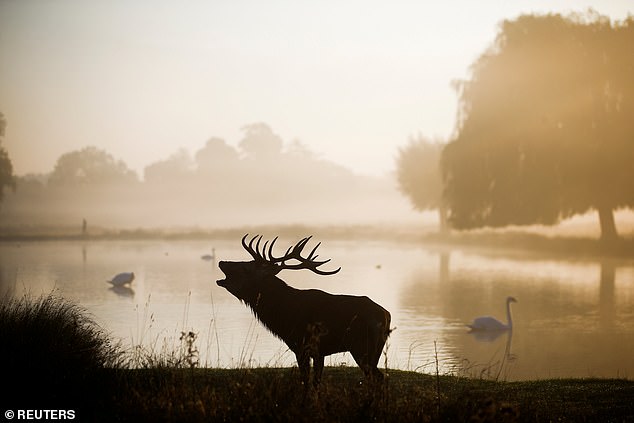 There are around 320 deer living in Bushy Park which is one of eight royal parks managed by The Royal Parks (file image of a red deer in Bushy Park on October 10, 2018)

The emergence of the video follows a warning from officials at the Royal Parks against feeding deer in both Bushy and Richmond Parks.

The spokesman said: ‘Deer are wild animals but as a consequence of being fed they now associate plastic bags with tasty treats.

‘Deer should be eating the natural food that both parks provide in abundance, such as grass, leaves and tree shoots, but unfortunately, due to the public feeding them, it’s becoming commonplace for these animals to seek out food from picnics, bins and plastic bags.

‘The amount of litter left across the Royal Parks following lockdown has increased by around a third. In the weekend just gone, staff cleared more than five tonnes of rubbish from Bushy Park.’

In June this year 20 tonnes of litter were left in Bushy Park. That was some 13 tonnes more than last year, which took staff 685 hours to clear away. 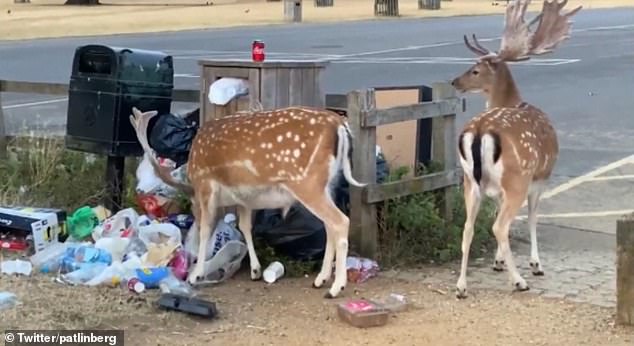 A spokesperson for The Royal Parks said: ‘‘Deer are wild animals but as a consequence of being fed they now associate plastic bags with tasty treats’ 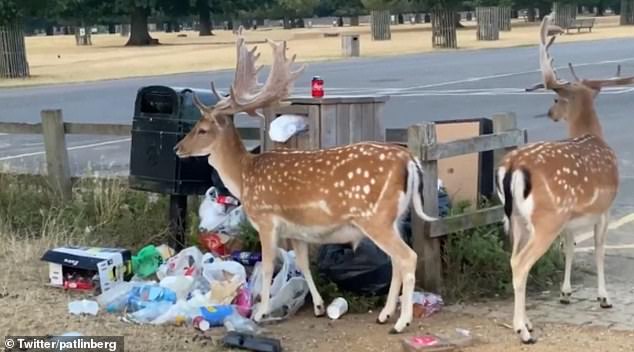 The Royal Parks have tried to cope with the problem by increasing the number of bins left in Bushy Park following lockdown by 50 per cent. At the same time, grounds staff are now staying until 9pm to clear rubbish.

The Royal Parks charity is asking people to #BeKindToYourParks to inspire care of the natural environment on our doorsteps.

The campaign welcomes people to the park to enjoy their visit but asks them to be kind to others and asks visitors to respect the environment by binning litter or taking it home if the bins are already full.

Assistant Park Manager at Bushy Park, Bill Swan, said: ‘This is an incredibly sad scene to capture. A witness told us that at one point one of the deer managed to hook a carrier bag full of cans and rubbish in its antler which it found distressing.

‘We’re finding more litter being left than ever before and we urge people to bin it or if the bins are already full to please take it home.

‘It’s all too common that we spot deer, foxes, squirrels and birds eating plastic and other rubbish left behind by visitors, causing their stomachs to block up and bloat and preventing them passing waste.

‘We want people to enjoy their visit to the beautiful spaces in our parks, but we ask visitors to stop, think and protect the wildlife they are there to enjoy.’