A family who just moved into a new home in Arizona were amazed to discover that the late-night visitors who had triggered their porch doorbell were a pair of hungry owls.

The family had fitted a Ring door camera at their home in Yuma and were reviewing the footage when they came face to face with the big-eyed birds.

The video shows the owls patrolling the front porch until they spot a bug.

A pair of owls were spotted on a Ring security camera on the front porch of a home in Yuma, Arizona 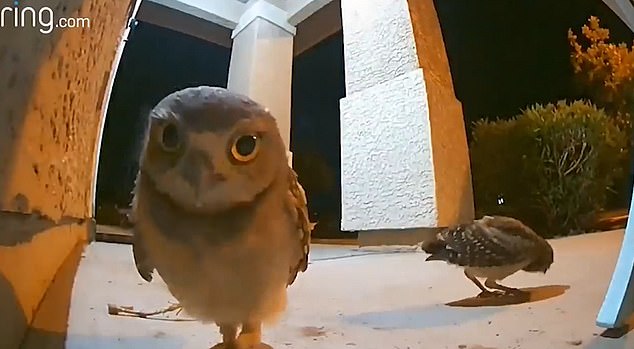 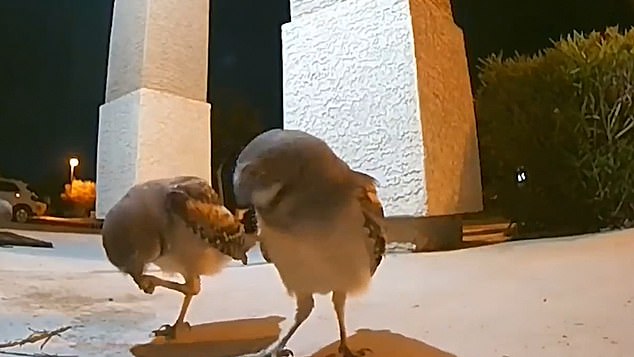 At one stage, both owls were chasing the same unfortunate insect who was quickly devoured

The bug scuttles across the floor, attempting to evade their lethal beaks and become a late-night dinner.

But faced with two hungry owls, the insect only has moments left to live before being grabbed by the quickest bird.

Right at the back of the shot another owl can briefly be spotted but it proves too shy to come right into shot.

The householder, identified only as Lyndsay, was delighted by the encounter, which occurred on July 28, at 10.30pm.

She said: ‘Anyone who knows me knows that I absolutely love owls.

‘I have owl decor all over the inside of my home. These owls had so much personality!

‘They were so wide-eyed peeking at the camera! One stole a bug the other had dropped and the third owl was a free spirit doing its own thing.’

The footage has been seen by more than 260,000 people since it was uploaded on July 29.

One viewer speculated that the owls may have been triggering the security lights to lure in moths and other insects who are attracted to the bright.

Another said they could watch a constant livestream of owls around the clock. 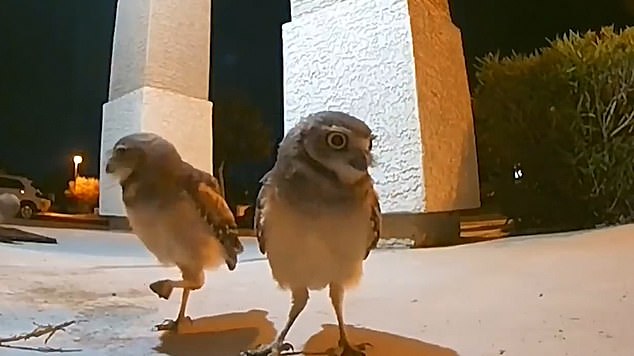 The footage has been viewed by more than 260,000 people since it was first uploaded onto the internet