Newly released aerial footage on Saturday shows the utter destruction and devastation wrought by Hurricane Irma on the British and U.S. Virgin Islands this week.

What were once homes in an idyllic Caribbean setting were reduced to roofless skeletons of structures surrounded by torn-down trees and shrubs that were at the mercy of 150-mile-per-hour winds and heavy rains.

Some of the homes seen in the town of Eustacia were not lucky enough to still be standing.

The beachside area appears to be reduced to ruins in a scene reminiscent of a nuclear explosion.

In Jost, houses that dot the coastline were also destroyed.

Aerial view of devastation following Hurricane Irma on Eustatia Island. Some islands appear to have been spared, but others suffered loss of life and damage on a near-apocalyptic scale 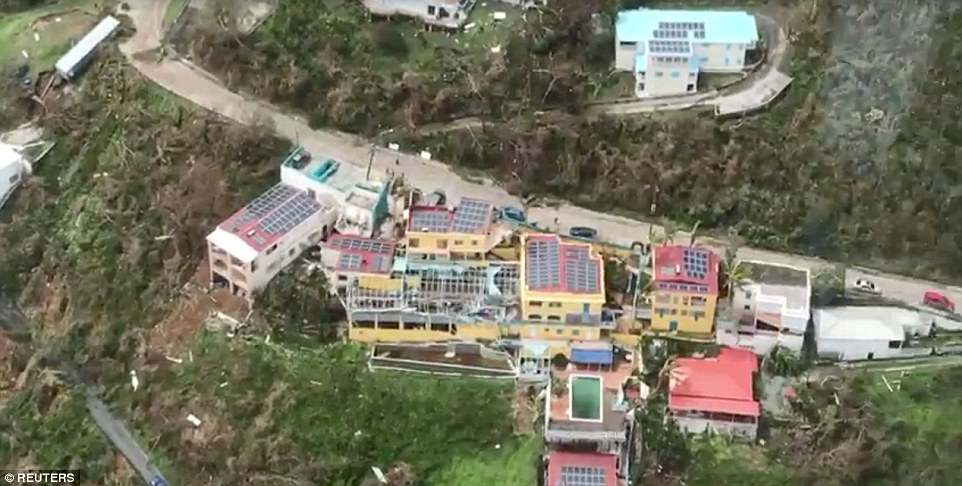 The outer bands of the approaching storm began to lash the islands early Wednesday afternoon. The above photo shows the devastation at Mafolie on St. Thomas in the U.S. Virgin Islands 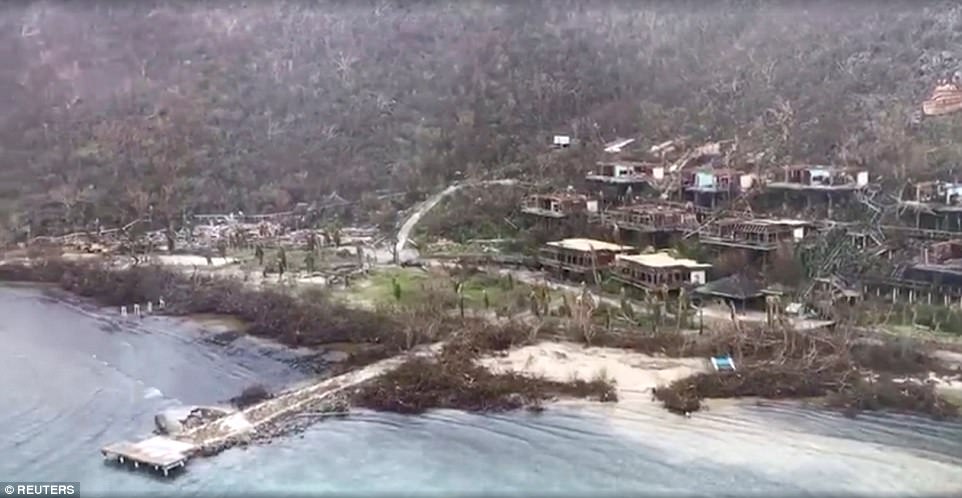 Boats that would normally float on the pristine waters just off the island were seen bunched together ashore as if thrown there haphazardly, the footage shows.

In Saba Rock, coastal resorts looked like bombed-out ghost towns as red-colored roofs were ripped off, revealing the remains of the buildings’ skeleton.

On Beef Island, the local airport was hit hard, with the airfield being completely devastated. 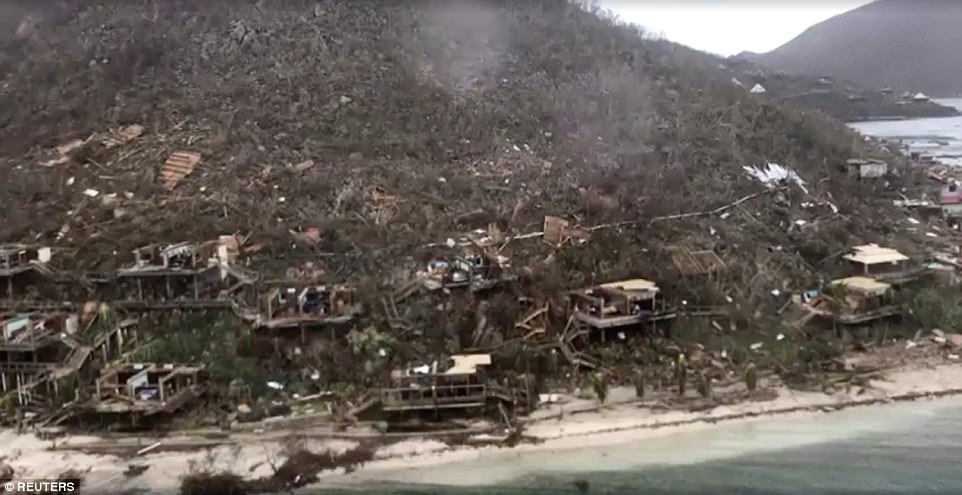 Another shot of the utter ruin at Bitter End, where the earth appeared scorched and debris completely covered the landscape 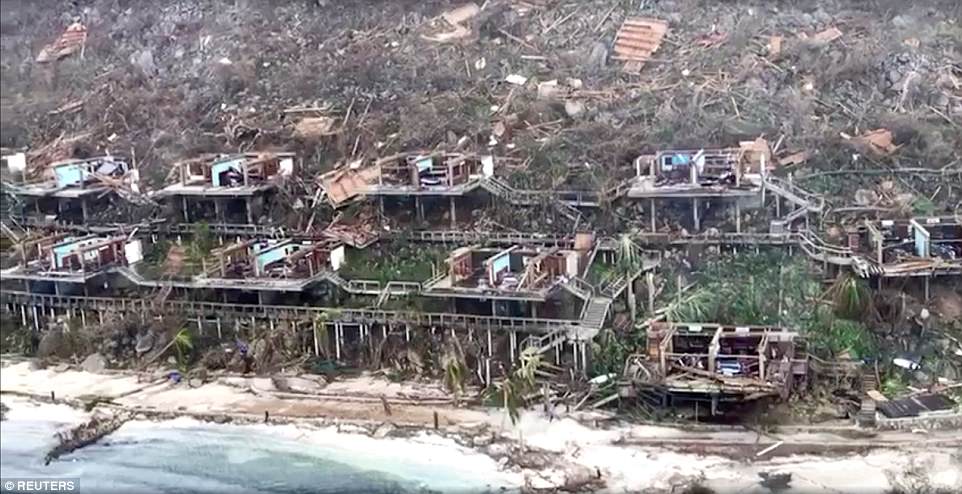 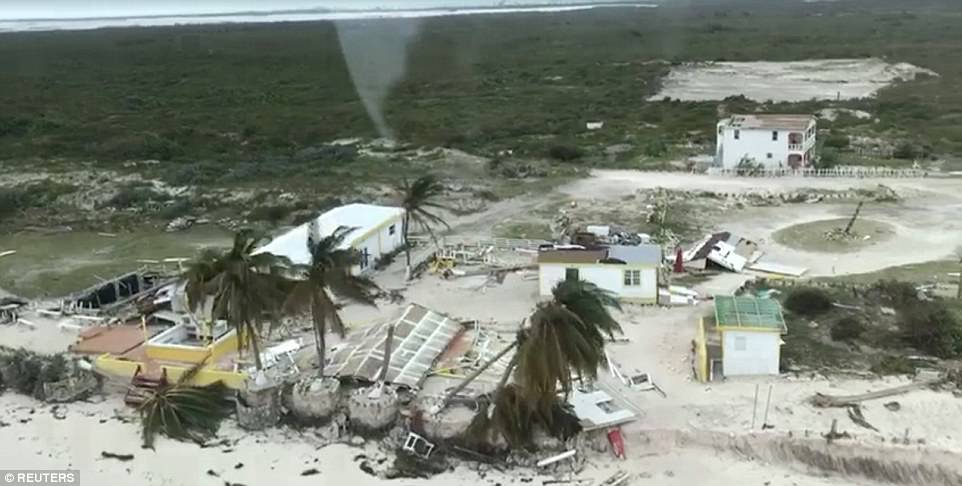 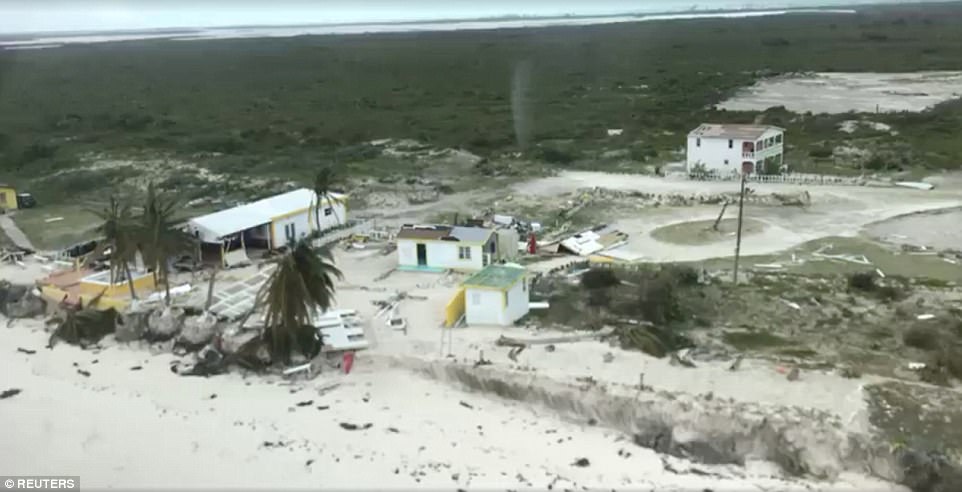 The hurricane knocked out power lines and essentially cut off the islands to the outside world. British soldiers were reportedly working to re-establish satellite communications

Somehow the air traffic control tower was still standing when the hurricane swept away.

The U.S. Virgin Islands also absorbed the wrath of Irma, as shards of rooftops were strewn across the landscape in St. Thomas.

At least four people were reported killed on these islands, according to The Weather Channel.

In St. Thomas, power lines and towers were downed, leaves were stripped off plants and trees, and the water and sewage treatment plant was badly damaged.

The harbor lay in ruins while hundreds of homes and businesses were destroyed.

The storm plunged the British Virgin Islands, an offshore business and legal center, into turmoil.

Yachts were pilled on top of each other in harbor and many houses in the hillside capital of Road Town on the main island of Tortola were badly damaged.

Both there and in Anguilla to the east, residents complained help from the British government was too slow in coming, prompting a defensive response from London.

‘We weren’t late,’ Defense Minister Michael Fallon told BBC television on Sunday, saying Britain had ‘pre-positioned’ an aid ship for the Caribbean hurricane season and that his government’s response ‘has been as good as anybody else’s.’

British billionaire entrepreneur Richard Branson, who sought refuge in the wine cellar of his home on Necker island, called Irma the ‘storm of the century’ on Twitter and urged people to make donations to help rebuild the region.

The Virgin Islands are among dozens of other Caribbean locales that are picking up the pieces.

From Cuba to Antigua, Caribbean islanders began counting the cost of Hurricane Irma on Sunday after the brutal storm left a trail of death, destruction and chaos that could take the tourist-dependent region years to recover from.

The ferocious Category 5 storm, which killed at least 28 people across the region, devastated housing, power supplies and communications, leaving some small islands almost cut off from the world.

European nations sent military reinforcements to keep order amid looting while the damage was expected to total billions of dollars.

Ex-pat billionaires and poor islanders alike were forced to take cover as Irma tore roofs off buildings, flipped cars and killed livestock, raging from the Leeward Islands across Puerto Rico and Hispaniola then into Cuba before turning toward Florida. 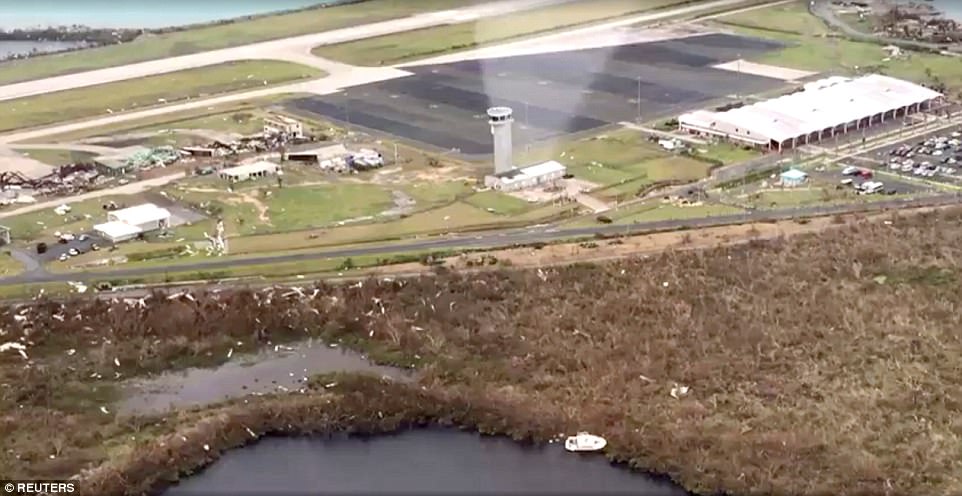 On Beef Island, the local airport was hit hard, with the airfield being completely devastated 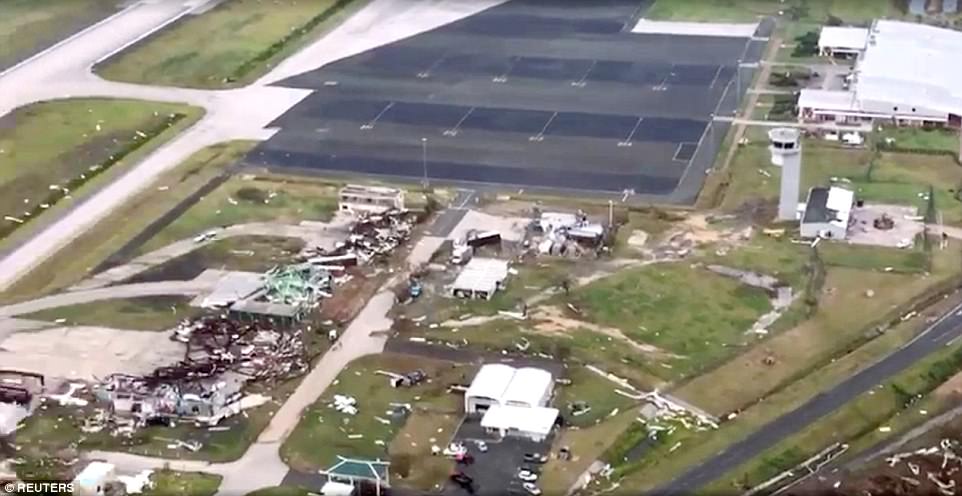 Somehow, the air traffic control tower (seen right) managed to stay in place, though the surrounding structures were not so lucy 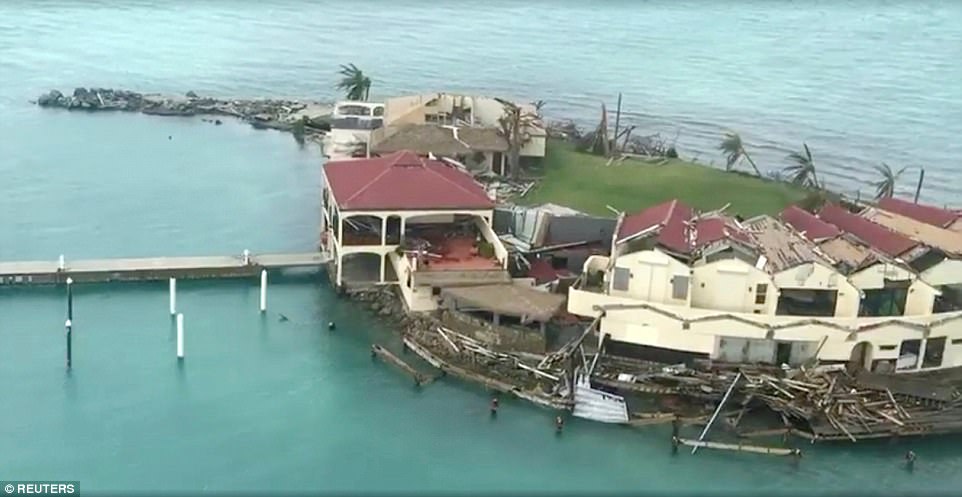 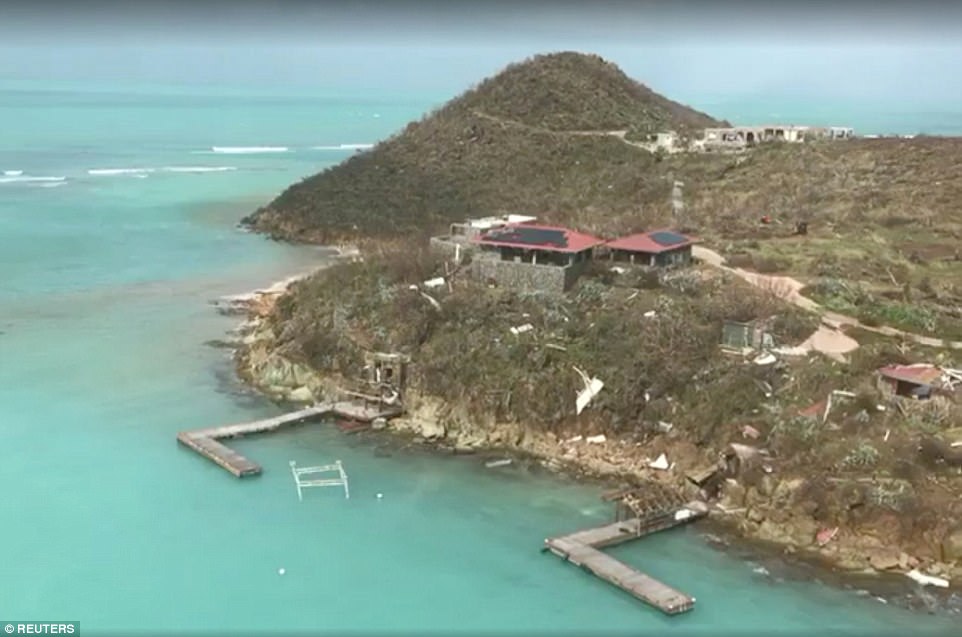 The above image shows another view of the devastation, this time in Eustacia Island 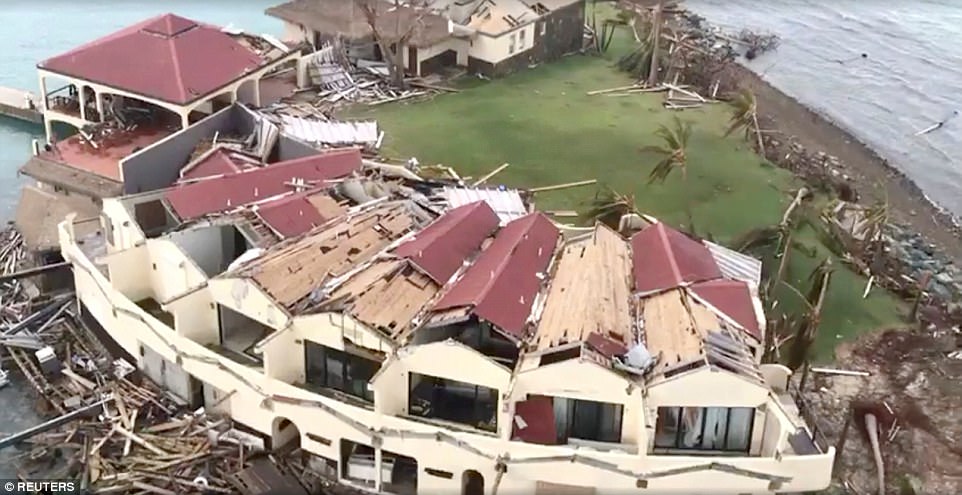 The coastal resort looked like a bombed-out ghost town as red-colored roofs were ripped off, revealing the remains of the buildings’ skeleton

Waves of up to 36 feet smashed businesses along the Cuban capital Havana’s sea-side drive on Sunday morning.

‘It’s a complete disaster and it will take a great deal of work to get Varadero back on its feet,’ said Osmel de Armas, 53, an aquatic photographer who works on the beach at the battered resort.

Sea-front hotels were evacuated in Havana and relief workers spent the night rescuing people from homes in the city center as the sea penetrated to historic depths in the flood-prone area.

President Donald Trump issued on Sunday a disaster declaration for Puerto Rico, where Irma killed at least 3 people and left hundreds of thousands without power.

Further east in the Caribbean, battered islands such as St. Martin and Barbuda were taking stock of the damage as people began emerging from shelters to scenes of devastation.

Dutch Prime Minister Mark Rutte said the death toll on the Dutch part of St. Martin had risen to four from two, and that 70 percent of homes had been damaged or destroyed.

Following reports of looting, the Netherlands said it would increase its military presence to 550 soldiers on the island by Monday, and Rutte said that to ensure order, security forces were authorized to act with a ‘firm hand’. 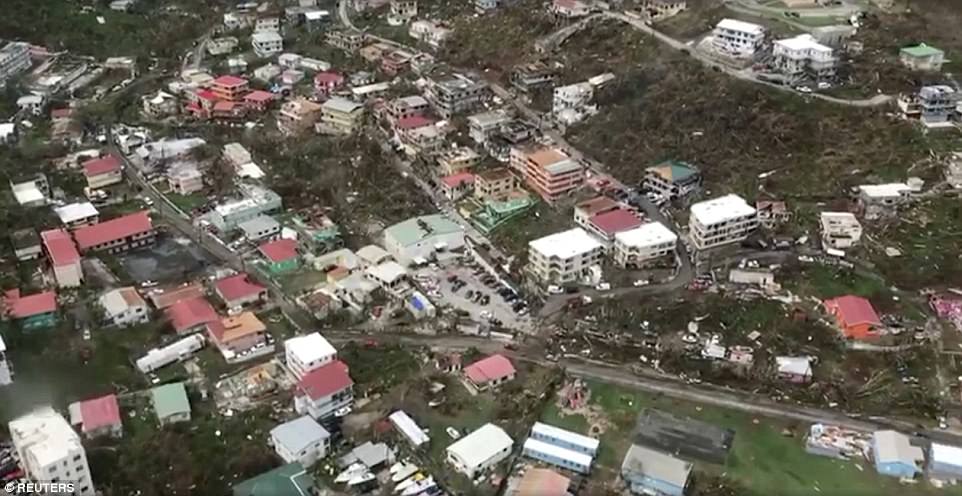 The above image shows the scale of destruction on St. Thomas in the U.S. Virgin Islands 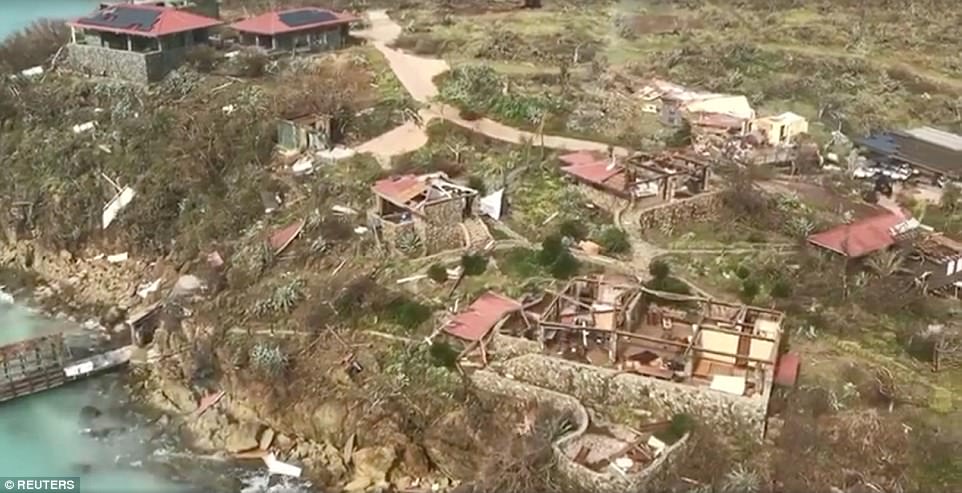 In St. Thomas, power lines and towers were downed, leaves were stripped off plants and trees, and the water and sewage treatment plant was badly damaged 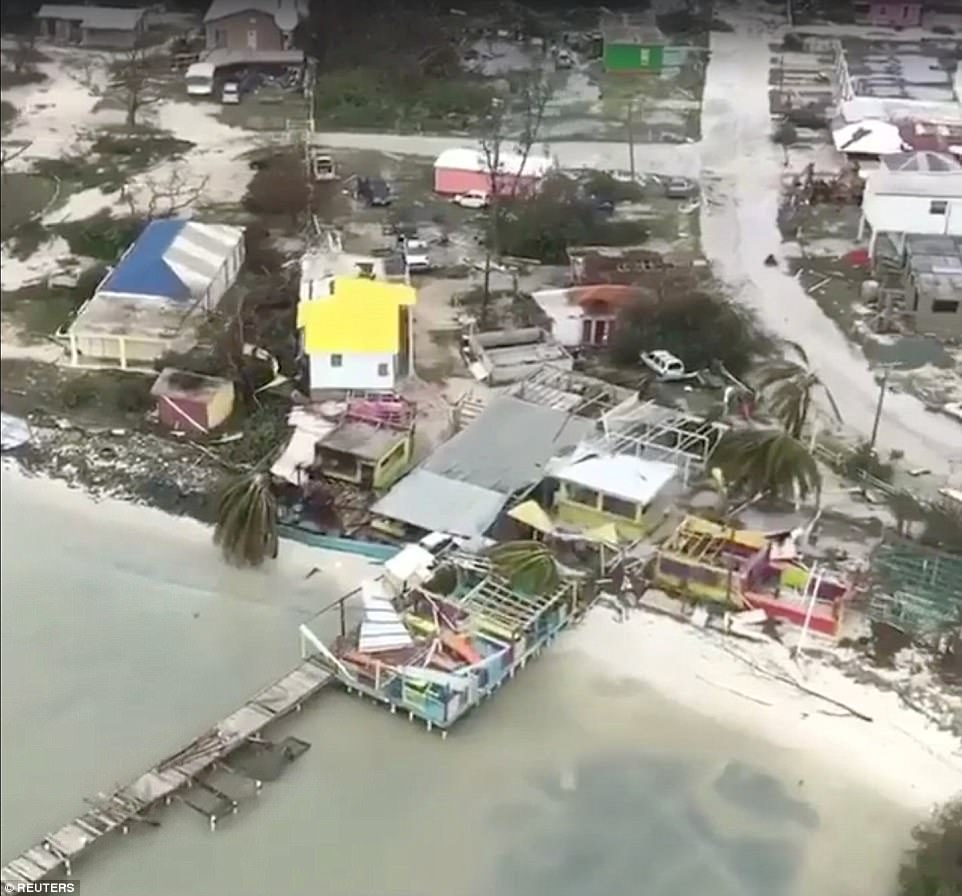 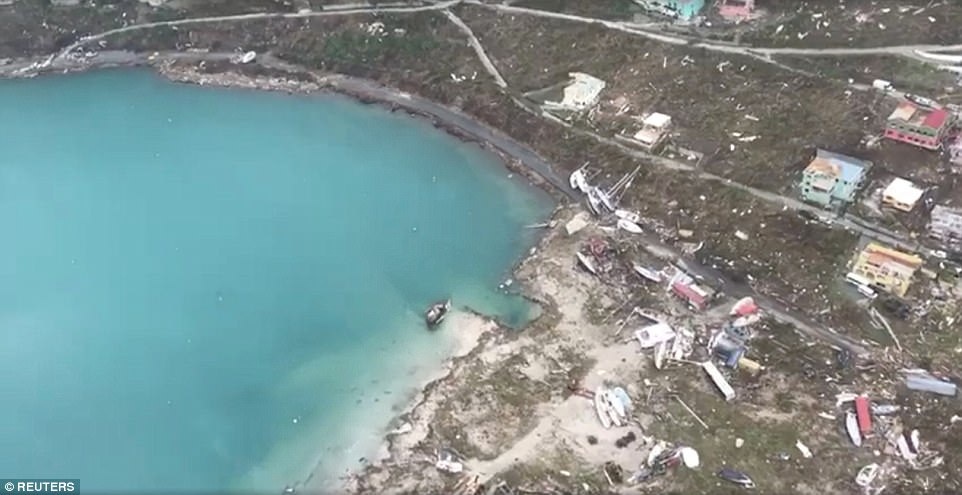 Boats that would normally float on the pristine waters just off the island were seen bunched together ashore as if thrown there haphazardly, the footage shows

Dutch authorities are evacuating tourists and injured people to Curacao to the south, where Dutch King Willem-Alexander and Interior Minister Ronald Plasterk are expected to arrive today.

France, which oversees neighboring Saint Barthelemy and other half of St Martin, said the police presence on the two islands had been boosted to close to 500.

The French interior ministry said 11 people suspected of ‘malicious actions’ had been arrested since Friday as television footage showed scenes of chaos on the islands with streets under water, boats and cars tossed into piles and torn rooftops.

Irma killed at least 10 people on the two islands, the French government said.

French President Emmanuel Macron was due to visit Saint Martin on Tuesday.

Barbuda, home to some 1,800 inhabitants, faces a reconstruction bill that could total hundreds of millions of dollars, state officials say, after Irma steamrolled the island and forced the local government to order a total evacuation.

The prime minister of Antigua and Barbuda, Gaston Browne, said Irma had wreaked ‘absolute devastation’ on Barbuda, which he said was now ‘barely habitable’ after 90 percent of cars and buildings had been damaged.