A Texas man was arrested in Florida this week after authorities say he stole a truck and some beer, and led officers on a high-speed chase while holding two open cans of brew out the window.

The pursuit and subsequent arrest that landed 27-year-old Justin Lee Smith in jail on Tuesday took place along Interstate 75 in Ocala shortly after 2am and was caught on police dashboard and body cameras.

The video begins with the chase already in progress. It shows Smith’s vehicle swerving before coming to a stop on the shoulder of the road.

As Ocala police officers rush toward the vehicle with their guns drawn, the suspect apparently takes a big swig out of a beer can before throwing it on the ground. 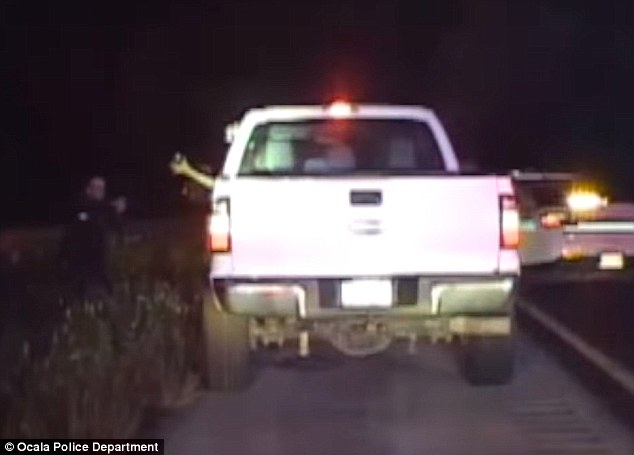 As officers close in on the vehicle, the driver, 27-year-old Justin Smith, takes a swig out of a can of Natural Ice beer before throwing it out the window

Moments before a half-dozen cops drag Smith out of the driver’s seat and pin him to the ground, he turns on Miranda Lambert’s song ‘Over It,’ which could be heard blasting out of the pickup truck.

Smith had not put the vehicle in park before he was detained, so it continued rolling before an officer jumped into the cabin and pushed the break.

On one of the officers’ body-cam video, the cop exclaims in disbelief, referring to the suspect, ‘drinking beer as he stopped!’ 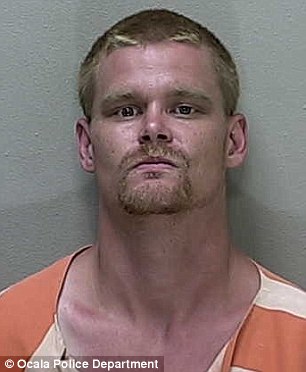 When the officer opens the driver’s side door and shines a light inside, the seat appears to be wet with what is believed to be spilled brew.

Smith was booked into the Marion County Jail on charges of grand theft of a motor vehicle, felony fleeing and eluding at a high rate of speed, DUI, retail petit theft, reckless driving, refusal to take a sobriety test, burglary of a conveyance and criminal mischief, reported the Ocala Star Banner.

The incident began unfolding just after 2am when a worker at the RaceTrac convenience store and station on southwest College Road reported a theft.

The store clerk told police that a customer had left without paying for an 18-pack of Natural Ice beer.

As Ocala police officer David Moorehead was standing in the parking lot, he observed a white Ford F-350 leaving the area and driving erratically.

Moorehead got back in his cruiser and followed the truck going south on I-75. 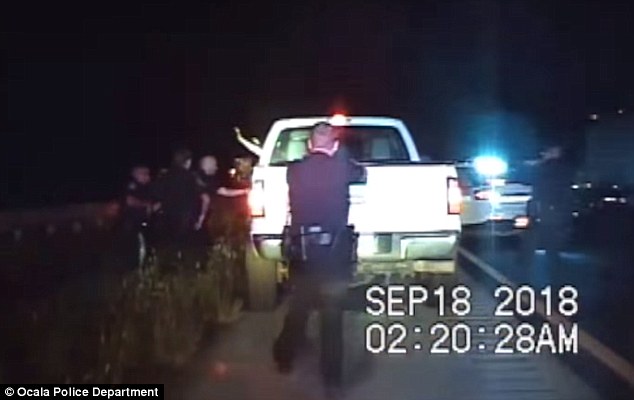 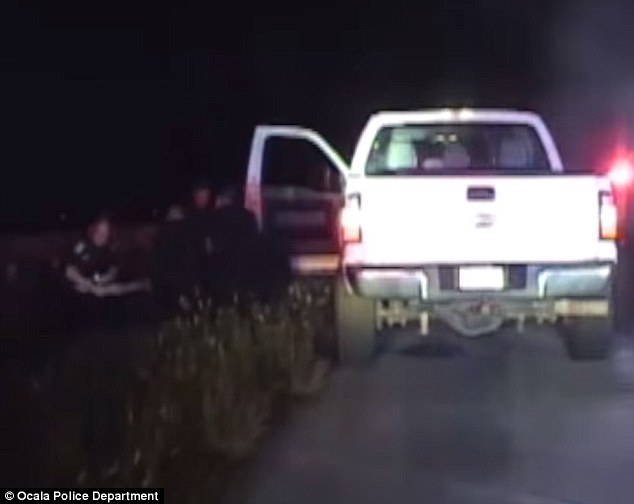 Smith, who reportedly appeared drunk, told an officer taking him to jail he was trying to keep his ‘buzz’ going

The cop later noted in his report that the Ford was swerving back and forth and doing 90mph in a 70mph speed zone.

Other officers later joined the chase, which came to an end at Mile Marker 331.

Moorehead wrote in his report that the driver, later identified as Justin Smith, of Houston, was holding an open beer can in each hand out the window.

According to the repot, Smith’s eyes were bloodshot and watery, his speech was slurred and he smelled of alcohol.

As the 27-year-old was being hauled off to jail, he reportedly told Moorehead that he was trying to keep his ‘buzz’ going.’

While Smith was behind bars, the Ford pickup truck he was driving was reported stolen from GTO Air Boats outside Ocala.

According to the Marion County Sheriff’s Office, a portion of a 6-foot-tall chain-link fence at the scene had been tempered with, a Jeep Wrangler had been broken into and a camera system and GPS had been stolen.

Smith remained in jail late Wednesday on bail totaling $22,500. He is due back in court on October 23.

Records indicate that Smith was arrested in Texas in July 2017 on a charge of burglary of a vehicle. His rap sheet also includes prior convictions for theft and DUI.