The Vienna Tourist Board has placed a mural of a 1916 painting that includes female genitalia on the side of a building in SoHo to drum up travel to Austria.

The city of New York apparently approved the street art reproduction of Egon Schiele’s ‘Reclined Female Nude,’ according to a statement from the advertising agency representing the Vienna Tourist Board on this campaign in New York.

‘[T]he mural conforms to our regional ad standards + practices in New York, and was allowed in the painted form you see,’ Ava Rollins of Ava Rollins & Associates told PJMedia.

But the city required versions of other works depicting by Schiele that would be placed in subway and other transit stations to be censored, according to the Vienna city site dedicated to its Viennese Modernism 2018 campaign.

The censoring was incorporated into the final campaign, utilizing the hashtag ‘#ToArtItsFreedom’ and imploring those taking in the edited art to ‘See it all in Vienna.’

The Vienna Tourist Board has placed a mural of a 1916 painting that includes female genitalia on the side of a building in SoHo to drum up travel to Austria, and NYC apparently approved it; The 150-square-foot mural is located at 220 Lafayette Street in Manhattan, near Spring Street

The mural depicting Schiele’s work of a nude woman, leaned back with legs splayed adorns the exposed portion of the side of the building located at 220 Lafayette Street in Manhattan, near the corner of Lafayette and Spring streets.

Explaining the origins of the campaign that spawned mural, its dedicated website read:

‘Around 1900, Egon Schiele dared to do what still causes excitement today: Present nudity in explicit and stark terms. A hundred years later, his works touch a raw nerve, even in a seemingly enlightened society.

‘Schiele’s expressionist display of naked bodies is obviously still too daring – the advertising for the anniversary year of Viennese Modernism in 2018 led to a ban on his nudes being shown unclad in public.’

Possibly proving the group’s point, the mural would appear to be in violation of New York Penal Law Section 245.11, titled ‘public display of offensive sexual material.’

But apparently, New York City made an exception for the Vienna Tourist Board’s promotion of 100 years of the ‘Viennese Modernism’ movement. 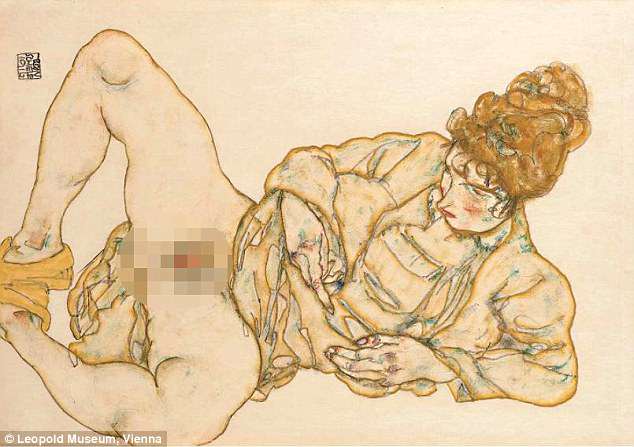 ‘Around 1900, Egon Schiele dared to do what still causes excitement today: Present nudity in explicit and stark terms,’ said the site dedicate to the campaign promoting 100 years of the ‘Viennese Modernism’ movement 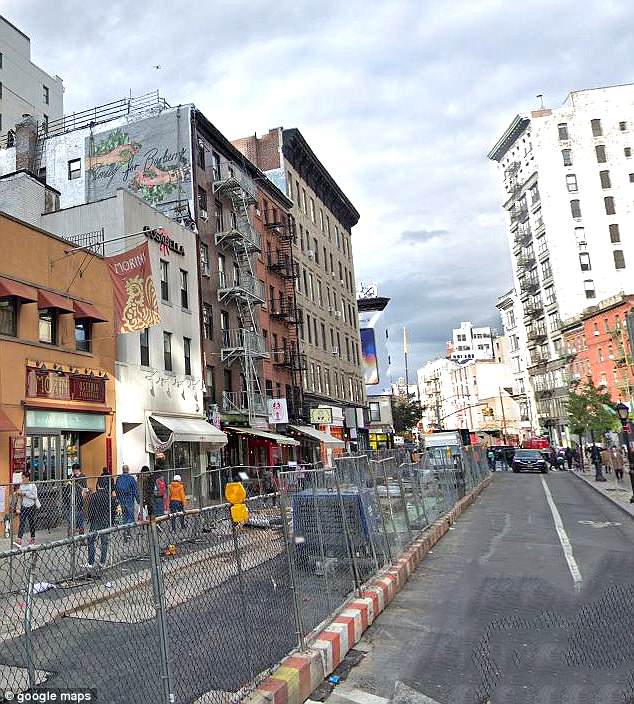 Calling the allowance ‘especially spectacular,’ the site dedicated to the campaign praised the city that never sleeps.

‘The uncensored depiction of Schiele’s “Lying Woman” in the public space, which would previously only be permitted in Vienna, can be seen on a large façade painting in New York’s SoHo. This mural stands in contrast to the sometimes allegedly more open-minded European metropolises, which rejected the motif even in censored form.’

A street view image of the location of the mural shows just how prominent the piece is on display, to passersby in the area.

But that’s about as progressive as the concrete jungle would get, for the sake of art.

‘In New York, too, Schiele stimulates a discourse on the freedom of art. After the UK and Germany, the Viennese Modernism campaign is now continuing in the United States from mid-April to mid-May and shows that here, too, the handling of art in advertising is a controversial topic,’ the site read.

The big apple denied similar advertisements for the city in Austria to be placed elsewhere about town, without first being censored.

‘”Still too daring” are the 100-year-old works for New York subway and bus stations, in which not even painted female nipples may be shown, while magazines like “The New Yorker” see no reason to deprive their readers of the world-famous nudes,’ the organization explained. 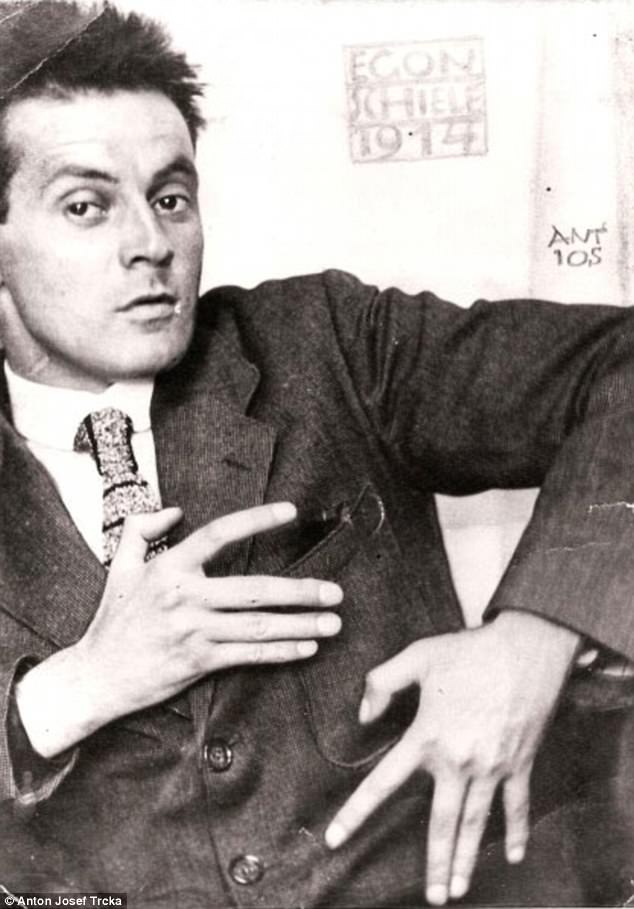 Artist Egon Schiele is shown here in a photo dated 1914; His painting that are included in Vienna Tourist Board’s campaign were provided by the Leopold Museum, located in Vienna 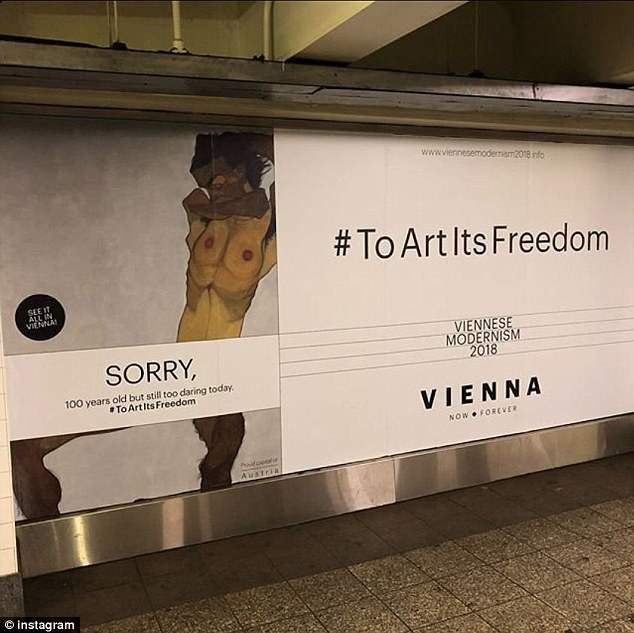 he big apple denied similar advertisements for the city in Austria to be placed elsewhere about town, without first being censored

The campaign’s site went on to detail the roadblocks it experienced, both in real life and online.

‘In order to advertise probably the most important epoch of art and culture in Vienna and its most celebrated representative, it was originally intended to stage nudes by Egon Schiele in major international cities in a big way. His now iconic works were to adorn large billboards, whole building walls and city lights in all their glory and question whether Schiele’s art, one hundred years after his death, is still perceived by society as being too daring to span the arc to the here and now,’ the organization said.

‘Totally thinkable in Vienna proved impossible in London, Hamburg and Cologne; as what was planned as an incitement to engage with the art and cultural offering of Viennese Modernism was rejected by advertising marketeers in both countries due to rules governing morality in the public domain. The works could not be shown in the original as proposed.

‘After many experiments with different kinds of covering, a large version was chosen to satisfy all demands so that one of the greatest artists of his time could be promoted in the public domain. Digital advertisements that had originally been approved, were declined both online and on social media platforms clearly demonstrating that nudity and its acceptance is not limited to the offline world.

‘These stipulations also provided the answer to the question asked in the campaign: Schiele’s art is still too daring for many people today.’ 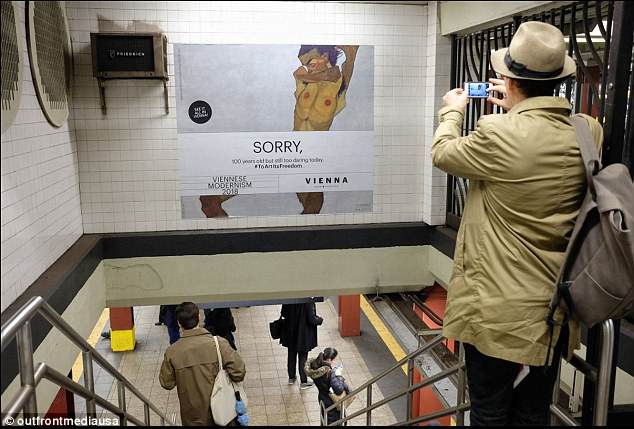 The censoring was incorporated into the final campaign, utilizing the hashtag ‘#ToArtItsFreedom’ and imploring those taking in the edited art to ‘See it all in Vienna’

The New York law that presumably would criminalize the mural reads:

‘A person is guilty of public display of offensive sexual material when, with knowledge of its character and content, he displays or permits to be displayed in or on any window, showcase, newsstand, display rack, wall, door, billboard, display board, viewing screen, moving picture screen, marquee or similar place, in such manner that the display is easily visible from or in any: public street, sidewalk or thoroughfare; transportation facility; or any place accessible to members of the public without fee or other limit or condition of admission such as a minimum age requirement and including but not limited to schools, places of amusement, parks and playgrounds but excluding rooms or apartments designed for actual residence; any pictorial, three-dimensional or other visual representation of a person or a portion of the human body that predominantly appeals to prurient interest in sex, and that:

‘(a) depicts nudity, or actual or simulated sexual conduct or sado-masochistic abuse; or

The law states that such ‘public display of offensive sexual material’ is a Class A misdemeanor.

An attorney told PJMedia that while the mural was in violation of the law, it would be difficult to find a court willing to enforce the code section.

In addition the attorney noted an attempt to enforce the penal code section might leave the city open to being sued for infringement of the First Amendment rights of the muralist.

The campaign has asked people across the world to participate in a discussion on this topic over social media.

‘In keeping with the spirit of Viennese Modernism, Vienna wants to revive and stimulate the spirit of lively discourse. Ultimately, however, the fact that no original depictions of Schiele nudes are allowed to be shown in Germany and England should even more strongly stimulate a discussion about the boundaries of art, the different moral codes in public and online as well as about the customs and values of our society,’ the site reads.

‘At #ToArtItsFreedom – following the slogan of the Vienna Secession, “To every age its art. To art its freedom” – the opinions and viewpoints of people will be collected on this topic on all social networks in 2018.’

The mural is expected to remain in place through mid-May. 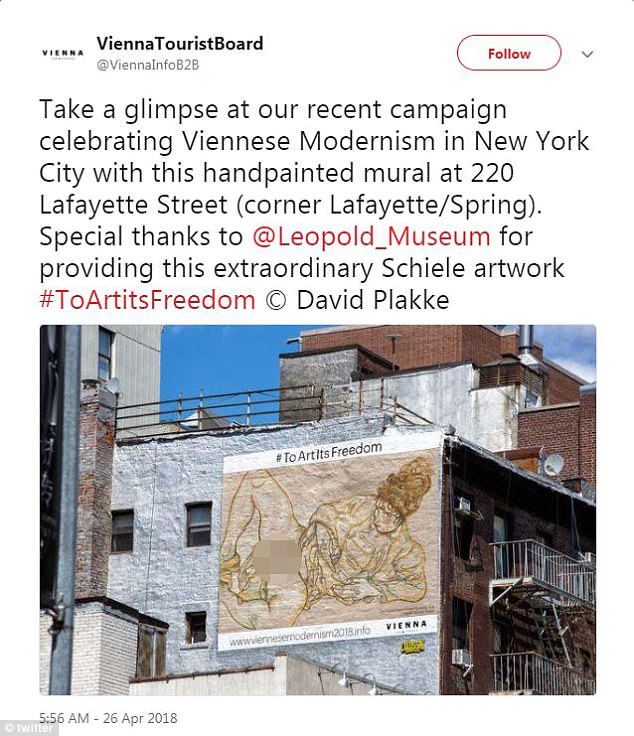 An attorney told PJMedia that while the mural was in violation of the law, it would be difficult to find a court willing to enforce the code section