Lonnie Kilpatrick has terminal, stage 4 kidney cancer likely caused by exposure to Agent Orange during his military service in the Vietnam War.

But for four years, the VA treated his back pain as arthritis, denied that he could have been exposed to the toxin, refused to unseal his medical records, and failed to test Kilpatrick for cancer.

When Kilpatrick’s records were finally unsealed, there was ‘undeniable’ proof that he had been exposed to Agent Orange – but that will not save Kilpatrick, who is being ‘made comfortable,’ at a VA in Florida.

He is one of thousands of veterans who are at risk for cancers, diabetes and heart diseases due to their service, but, like Kilpatrick, many go untreated and undiagnosed until it is too late.

Lonnie Kilpatrick has stage 4 kidney cancer, likely caused by his exposure to a toxic herbacide during his service in the Vietnam War

During the Vietnam War, 2.7 million people served their country and 75,000 of those service members are considered severely disabled.

In exchange for their sacrifice, the Department of Veteran’s Affairs (VA) is meant to provide healthcare services to former service members, but the needs of many of these men, women and their families go unmet and undiagnosed, especially those whose records are sealed.

Among the health concerns the VA is responsible for addressing are those related to exposure to Agent Orange, a potent herbicide that US troops sprayed during the Vietnam War in order to kill of crops and forest floor cover that worked to the advantage of Vietnamese soldiers during the war.

Four years ago, Kilpatrick noticed persistent pain in his lower back. 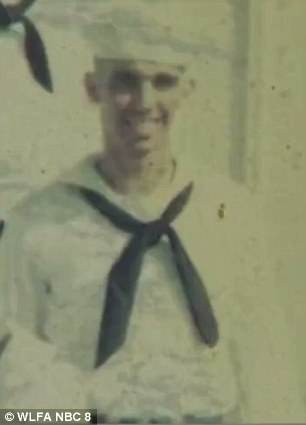 As member of a Naval unit that did classified electronic warfare work in Guam, Kilpatrick’s records were sealed

The VA diagnosed his discomfort as arthritis, but never thought to test him for kidney cancer, which – because the kidneys rest in the lower abdomen, near the spine – can also cause intermittent back pain.

Kilpatrick served in the US Navy and was stationed in Guam in a ‘highly classified electronic warfare unit’ according to local news channel Target 8.

Lonnie Kilpatrick served in the Navy in Guam, wherea potent herbicide that US troops sprayed during the Vietnam War in order to kill of crops and forest floor cover that worked to the advantage of Vietnamese soldiers during the war.

Its poisonous effects were not limited to plant life, however.

Agent Orange contains a chemical called dioxin which was used at more than 20 times the concentration its manufacturers recommend during the war.

Dioxin remains a controversial contaminant, but the VA has recognized that anyone who served in particular locations during the Vietnam War should be ‘presumed’ to have been exposed to the toxin.

That means that they are at risk for an array of cancers – including lung and prostate cancers, lymphoma and leukemia – and their children are more likely to be born with birth defects.

Kilpatrick told Target 8 that when he was stationed near highly-sprayed airbases and runways he ‘got extremely sick,’ running a fever and developing a rash the mottled his entire body. 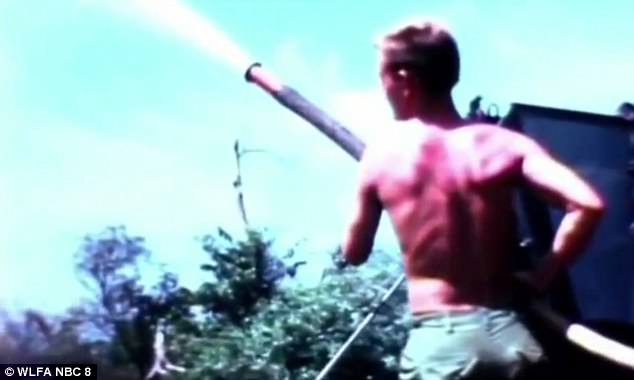 Agent Orange is a powerful herbicide that US troops spayed widely during the Vietnam War to kill off the opposition’s crops and jungle cover, but it has sickened thousands of veterans

Both of these are common, immediate symptoms of Agent Orange exposure.

But, decades later, VAs across the country are more accustomed to seeing arthritis in Vietnam veterans, most of whom are now in their 60s and 70s, than they are to diagnosing Agent Orange-related illnesses.

Agent Orange contained high concentrations of bioxin, a toxic chemical that can cause a host of diseases, including:

So when Kilpatrick told his VA doctor that his back had been bothering him, he was diagnosed with arthritis.

For four years, his symptoms persisted, until he was finally diagnosed with Stage 4 kidney cancer.

There is ‘nothing they can do for me,’ he told Target 8, ‘Make me comfortable, you know, maybe give me some drugs that will make me live a little longer.’

Kilpatrick hoped he could at least get disability benefits for himself and his family since he’d likely developed the cancer due to Agent Orange exposure.

But because the details of Kilpatrick’s service and medical records were classified, he had no means to prove that that was the case, and the VA turned down his claim.

Finally, he and his wife, Sheila, got in touch with Congressman Gus Bilirakis, whose office petitioned the Department of Defense to release Kilpatrick’s records.

Agent Orange benefits are supposed to be based on ‘presumption, and if you have been exposed and have a certain list of diseases – which he does – then you’re auto-approved for benefits, but the VA had said that there was no proof and denied the claim,’ explained Summer Robertson, Rep Bilirakis’s deputy chief of staff.

She says that within 24 hours, the Department of Defense declassified Kilpatrick’s records and, shortly thereafter, he was awarded $200,000 in back-paid benefits. 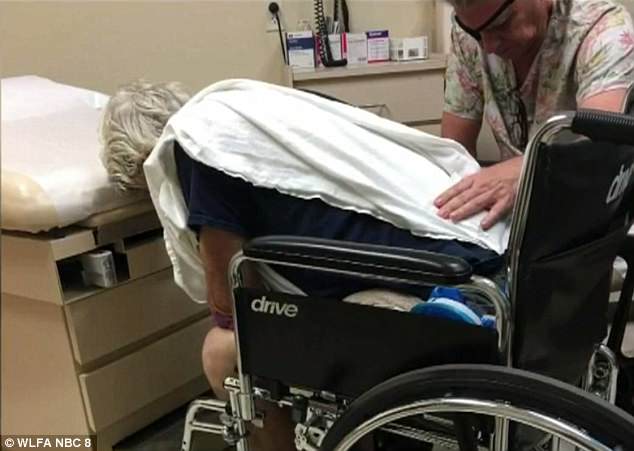 Kilpatrick leans forward with back pain that the VA diagnosed as arthritis, but his kidney cancer can cause the same sort of lower back discomfort

‘He has a terminal illness, but [the money] will greatly help his family,’ said Robertson.

She says that Rep Bilirakis’s office handles about 300 veterans’ cases at any given time.

Many of them believe they were exposed to Agent Orange, but the VA ‘has said they weren’t exposed to enough of the toxin to have a presumptive claim,’ she says.

The VA’s disbelief is veterans like Kilpatrick feeling helpless and abandoned in their moments of greatest need.

‘I didn’t walk out on them,’ Kilpatrick said.

‘When you join the service, it’s all, “we’re going to take care of you, we got your back.” Come to find out, you ain’t got nothing,’ he said.