It was an unforgettable day of sport which was almost as challenging for spectators as it was for those taking part.

Millions of people around the globe watched as Novak Djokovic defeated Roger Federer in an epic five-set Wimbledon final while England won the Cricket World Cup in a nail-biting super over decider against New Zealand.

Meanwhile Lewis Hamilton secured his sixth British Grand Prix title at Silverstone in the Formula One sending even more fans around the UK into frenzied celebrations, while the Tour de France and golf’s Scottish Open also vied for attention.

The biggest issue for most was how to keep on top of all the sports at the same time, with many trying to find ways to set up multiple screens wherever they were.

Sport fans trying to keep up with the British Grand Prix, Cricket World Cup and Wimbledon finals yesterday were trying to watch as many screens as they could 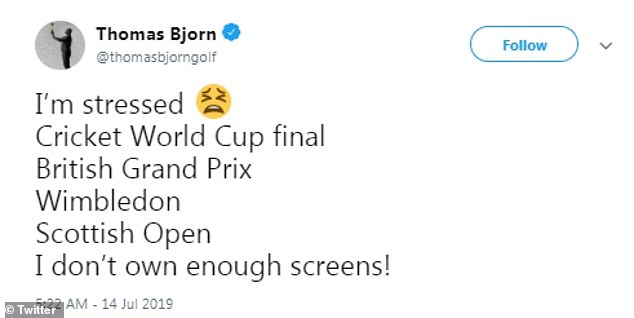 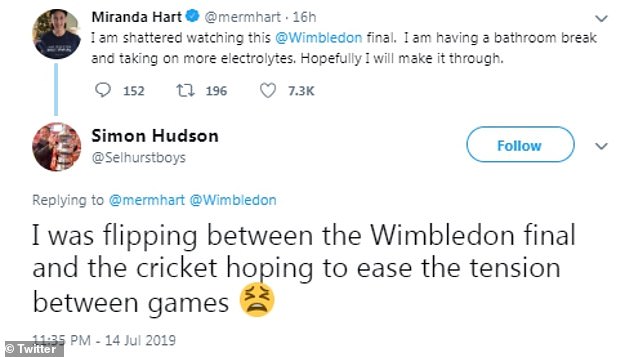 The tense finishes at both Wimbledon and the cricket at Lord’s has also led some to brand July 14 ‘International Sports Day’ to remember the incredible clashes.

With Wimbledon and the cricket swinging one way and then the other, thousands watching at home could not cope with the drama.

Some set up one of the sports on their phones or tablets while watching the other on television to ensure they didn’t miss a moment – while others were dashing between different screens in different rooms.

One woman on Twitter said: ‘My keep fit yesterday consisted of gardening in the morning and running to and fro from kitchen tv to lounge watching exciting Wimbledon & cricket. My blood pressure has calmed down.’

Even Danish Golfer Thomas Bjorn was not immune, revealing he could not cope with all the options in front of him.

Another user added: ‘I was flipping between the Wimbledon final and the cricket hoping to ease the tension between games.’ 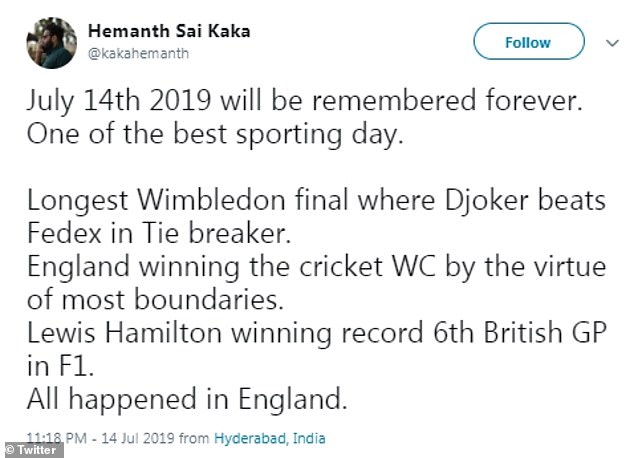 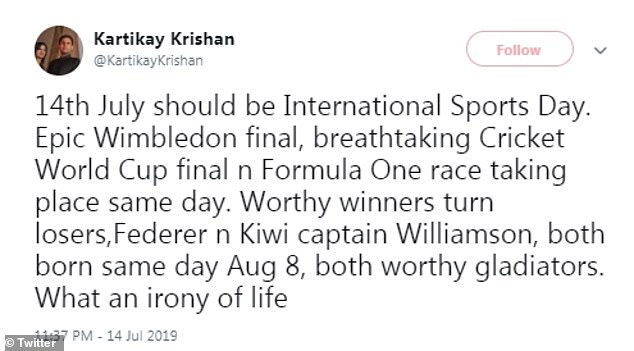 Another user praised the day as ‘Super Sunday’ and said they could not stop switching the channels: ‘What a nail biting finish in the cricket world cup at Lords. Simultaneously at Wimbledon ball to ball rally, evenly matched hard contest. Kept on sw channels back and forth. Super Sunday.’

And another Twitter user threw the Tour de France into the sporting mix, adding: ‘Only just starting to come down from yesterday’s crazy day of sport.

‘Multiple screens and a lot of channel hopping to try and watch the amazing cricket World Cup final, the Wimbledon final, the British Grand Prix, and stage 9 of the tour. What a day.’

Another Twitter user joked about how the competitors were the ones really missing out because they couldn’t watch the other final going on.

Twitter user Barney Skinner added whoever scheduled the matches to be on at the same time should be forced to watch bad films forever.

He said: ‘Whoever has the bright idea to put the Wimbledon Men’s Final and the Men’s Cricket World Cup Final on at the same time deserves to be forced to watch Battlefield Earth and The Room at the same time. Forever.’

But while fans were stressed about how to watch the different sports at the same time, they all agreed on how amazing a day it was.

And some on Twitter called for July 14 to be officially recognised in response.

Even more on social media praised how England was the location for some of the closest sporting clashes of recent year.

One Twitter user said: ‘July 14th 2019 will be remembered forever. One of the best sporting day. Longest Wimbledon final where Djoker beats Fedex in Tie breaker.

‘England winning the cricket WC by the virtue of most boundaries. Lewis Hamilton winning record 6th British GP in F1. All happened in England.’

Another added: ‘July 14th should be declared as international sports day… it was great day for sports in one of the most thrilling one day cricket World Cup final and Wimbledon finals. Incidentally both in London.’

But not everybody was able to enjoy everything on offer.

He wrote on Twitter: ‘And the devil took him up a high mountain and said, “This sizzling afternoon of sport, the cricket, the Grand Prix, the men’s final at Wimbledon, could be yours!” But he said, “Get away from me, for there are ordinations at Peterborough Cathedral!”