Viewers of Good Morning Britain were left divided this morning after two guests clashed over the idea of compassionate leave following the death of a pet.

Radio presenter Cristo Foufas and former Apprentice contestant Daniel Elahi appeared on the show this morning to discuss taking time off to grieve for a pet.

While Cristo said he’d need up to a week off to cope with the death of his dog DD, Daniel slammed the concept, saying it couldn’t work economically.

Viewers were left divided over the suggestion, with some pet owners saying they thought it was a good idea, and others calling it ‘crazy’.

Viewers were left divided over the debate, with many taking to Twitter to share their thoughts. While some called the idea ‘crazy’, some pet owners were in support of it

One slammed the idea on Twitter, writing: ‘Are they expecting full pay for a week while they are off? That’s crazy.’

But others felt it would be sensible, with one saying: ‘Totally agree people should get compassionate leave when a pet dies. Our dog 13 years in is one of the family. And would be sorely missed.’

Employers are not required by law to grant time off when a pet dies, but it is becoming more common to grieve the loss of an animal and take time off to do so.

Cristo, who appeared on the show alongside his dog Dominique Deveraux, said he would need time off to cope if she died, telling presenter Richard Madeley that he would be ‘absolutely bereft’ if his dog died. 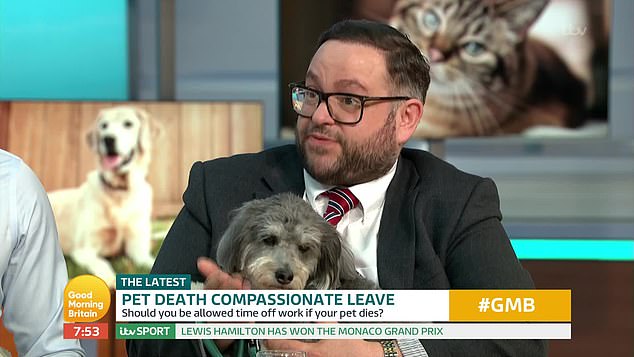 Radio presenter Christo said he would be ‘absolutely bereft’ if his dog Dominique Deveraux died, saying he would need a week off work to cope with his grief

He said: ‘I would need time off, absolutely. I work in radio, but if I had a Monday-Friday office job, there would be no way that I would be able to perform in a way that is conducive to doing a good job.’

He went on: ‘I would be grief stricken. I’d think I’d need the rest of the week off. Perhaps even longer. It’s a member of the family.’

As Richard and his fellow presenter Charlotte Hawkins looked shocked at the idea, the radio presenter and pet lover pressed on.

He explained: ‘You’d have to have the funeral, you’d have to arrange all of that. I would need to do that. 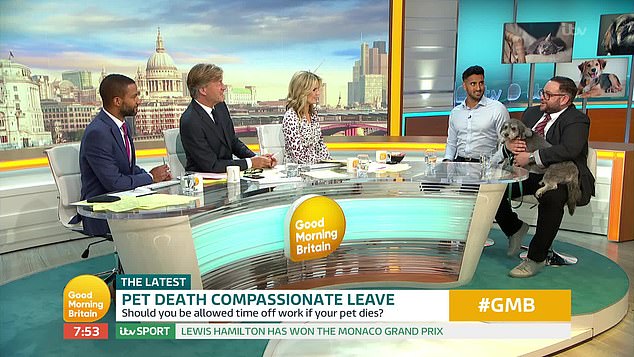 Cristo clashed with Daniel Elahi on the programme, who suggested it would cost the economy up to £1 billion if employers allowed every pet owner compassionate leave

He went on to reveal his relationship with his dog could be considered more important than that of his family members.

The radio presenter said: ‘Unlike some family members who you only see every week or two, I see DD every morning, I take her out at the same time, feed her at the same time. I would be absolutely bereft.’

But Daniel slammed the idea, saying: ‘But where do you draw the line? You would take a week off, but the next person might ask for two weeks off.’

The business owner went on: ‘I wouldn’t do it. I wouldn’t do it personally. It’s kind of bespoke if the firm can afford to give that time off, whether it’s paid or unpaid, whether the employee can cope with it.’ 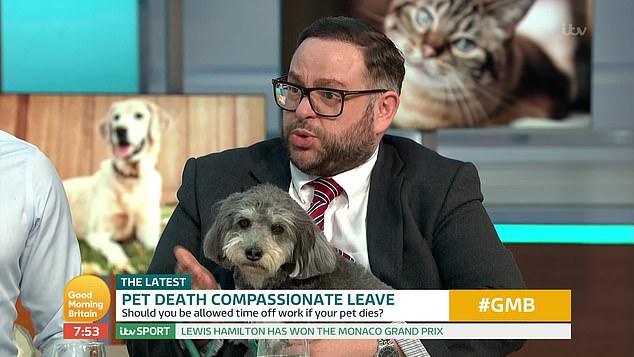 Pet lover Cristo suggested he would need up to a week off to cope with the death of his dog, saying he often felt closer to her than his family members

Daniel pointed out that it would be ridiculous for someone who had a pond with hundreds of gold fish to take a day off every time one of the fish died.

He said: ‘As a small business owner, could you afford to give every employee two weeks off every time a pet died? I personally couldn’t.’

Cristo argued back, saying: ‘But could you afford not to, if they couldn’t perform in their role?’

But Daniel was determined, asking: ‘Who covers the economic cost of this?’ 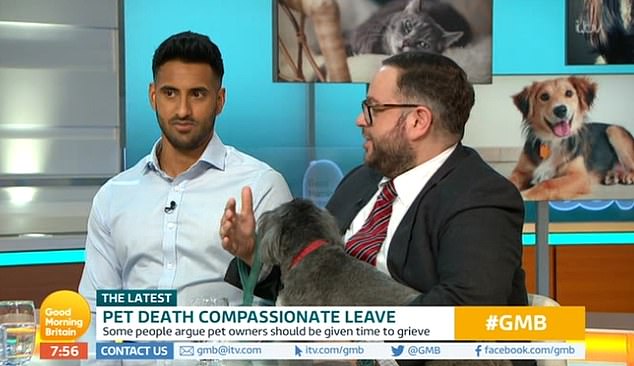 Daniel was clear in considering the impact of allowing pet owners time off to cope with the deaths of their animals, predicting that it could cost the economy £1 billion

He explained: ‘Whilst I understand that finance is obviously secondary in such issues, if we look at the public sector in this country, it employs five and a half million staff, and the number of pet owners in this country are 50 per cent.

‘Would you be prepared to have your taxes increased by a billion pounds or having services cut?’

But Cristo stunned Daniel by suggesting he would be in favour of that choice, saying he considered the mental health cost of restricting compassionate leave more important. 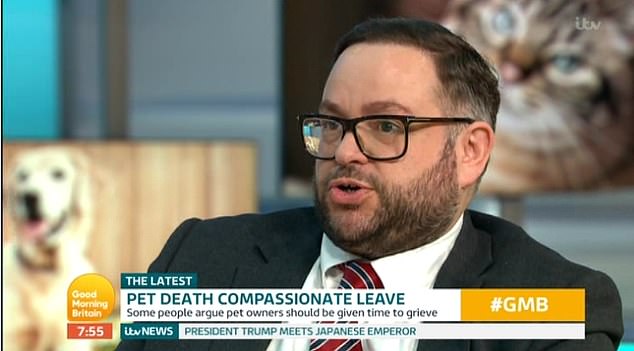 He explained: ‘If it meant that they could do a better job long term and actually if their mental health would suffer as a result of dragging themselves into work grief stricken.

We can’t talk about a mental health epidemic and then abandon that when we’re grief stricken.’

Viewers were left divided over the idea, with many agreeing with Daniel that the idea was ridiculous.

‘Is this possibly the biggest ‘snowflake’ I’ve ever seen?’ one questioned on Twitter,’Yes, yes it is. You’ll get 1 day off, like it or lump it.’

Many were divided over the idea, with some agreeing with Daniel that compassionate leave for pets shouldn’t be allowed. One called it ‘crazy’

Another wrote:’Compassionate leave for pets? You’re having a laugh.’

One commented:’I was self employed when my Dad died and was back at work the next day. Some people don’t have the luxury.’

Another added: ‘What if a kids hamster dies and he/she is devastated. Do they get time off school?’

But others were in favour of the idea, with one saying:’ Watching #GMB I agree you should be allowed compassionate leave off work if your pet dies.

Meanwhile some pet owners were in favour of the idea, with some taking to Twitter to say they would take time off over their pets dying.

‘Dogs especially are like a member of your family in some cases people can’t have children so their pets are like there child of course you are going to grieve.’

Another wrote: ‘When my dog dies I am having time off!’

They went on:’If you’ve looked after an animal for 9/10yr or longer and it dies, if you’re not upset then you don’t deserve to have ever had that animal.’

One commented: ‘We had out dog for 15 years, we were absolutely destroyed when we lost her. We all needed time to grief. Albeit only a day or two.’