Simon and Amy, from Hampshire, bought a water mill, cottage and coach house for £830,000 in 2017 and spent a year renovating the derelict buildings before embarking on an ambitious glass extension.

Though the couple’s initial budget was £1 million, professional gambler Simon and his school teacher wife confessed to presenter Tinie Tempah at the end of the programme they had gone over budget by £100,000.

Many of those watching were left stunned by their admission, and questioned how they’d been able to afford the mega-extension in the first place. One wrote: ‘So £800k to buy it then £1 million to do it up, some people have too much money to waste.’ 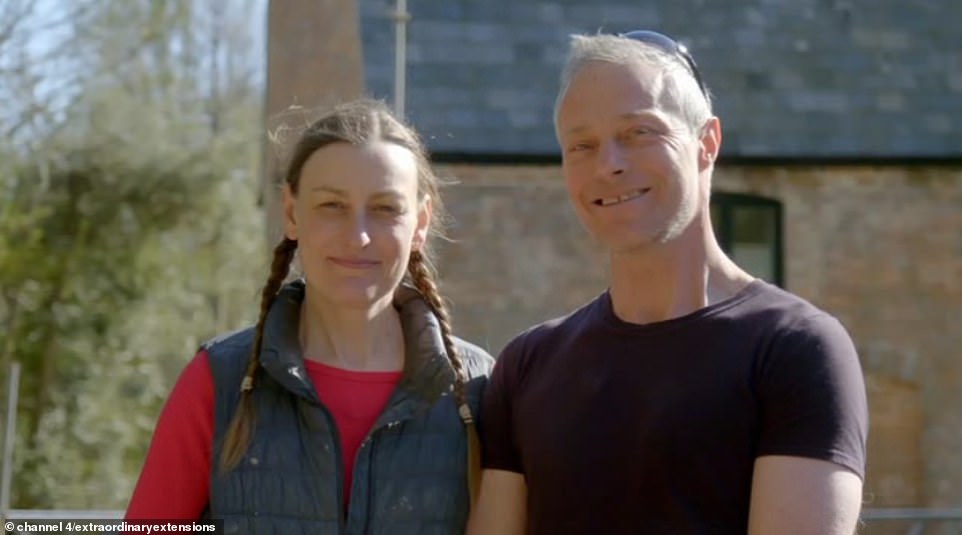 Professional gambler Simon and his school teacher wife confessed to presenter Tinie Tempah at the end of the programme they had gone over budget by £100,000 – but many viewers wondered how they’d been able to afford the project

The couple bought the derelict buildings, compromising of a water mill, a miller’s cottage and a coach house, set in four and a half acres, in Milford-on-Sea for £830,000.

They had fallen in love with the property after seeing it online, with Amy saying: ‘I got halfway down the drive and I could just feel this magic.

The Grade-II listed buildings totalling 4,000 square feet were left abandoned for over a decade and required the couple to work ‘dawn till dusk’ on their project.

A year into the build and they had restored the space, but they wanted to do a large extension. 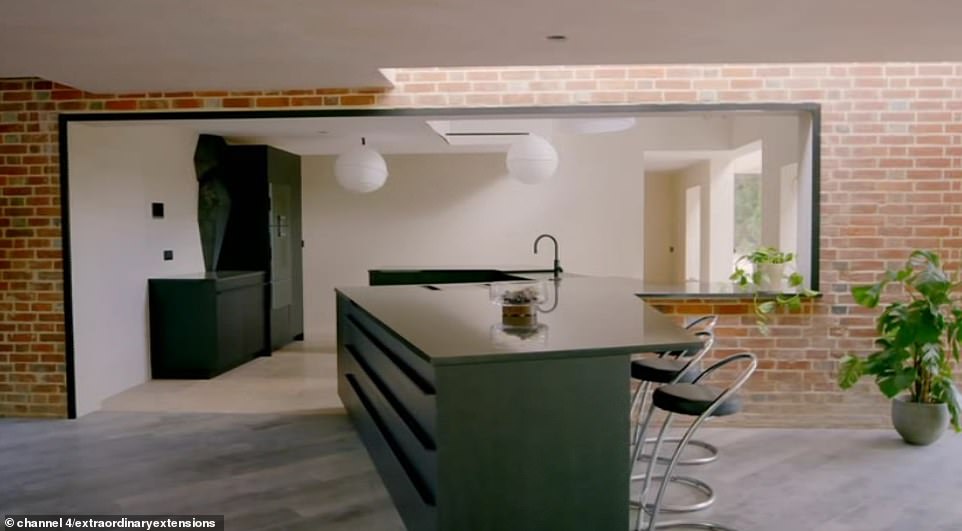 In their enormous extension, the couple wanted a stunning state of the art black kitchen with minimalist furniture and detailing (pictured) 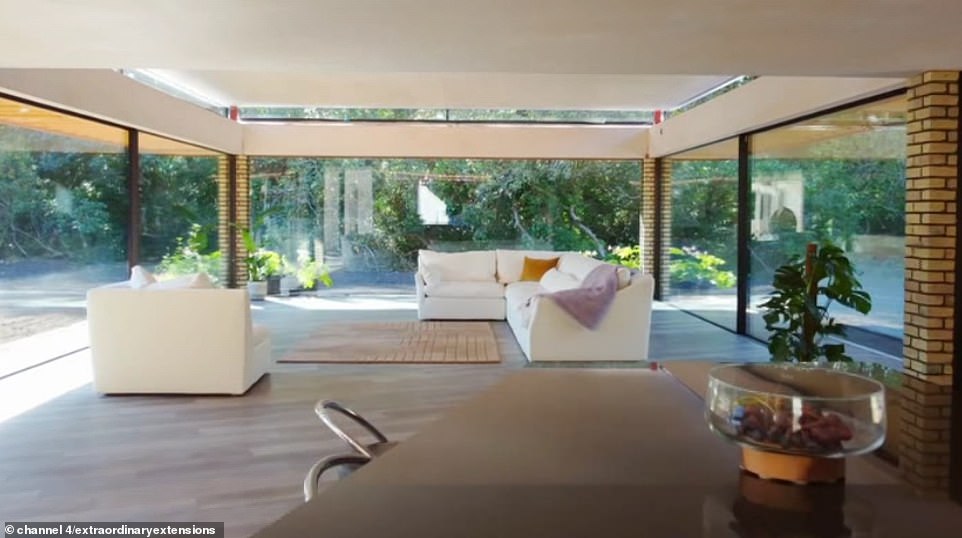 Meanwhile the bulk of the space in the £1.1 million extension was taken up by the ‘living room’, which featured three enormous glass walls 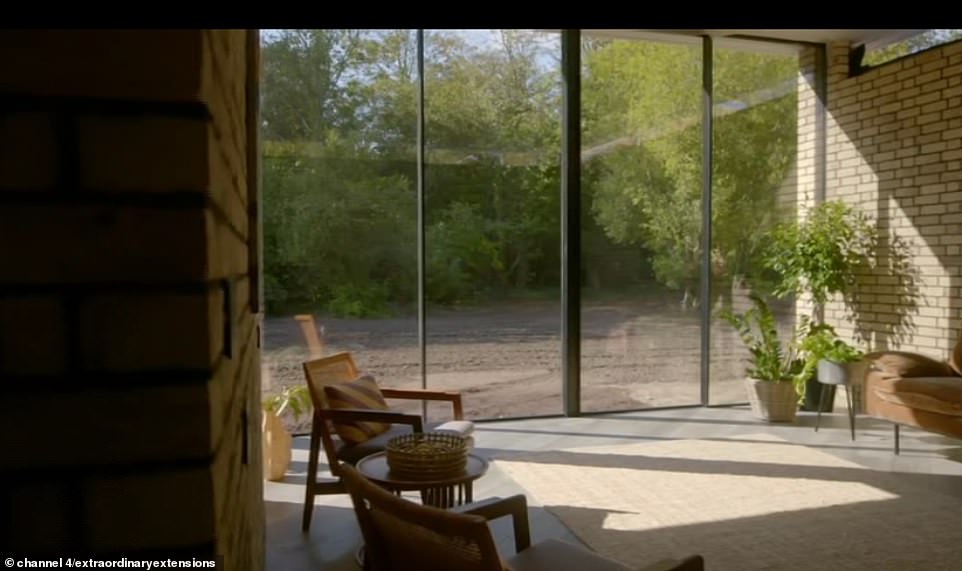 A corridor connected the couple’s enormous living area to other rooms built onto the sides of the three properties, including a garden room

Simon confessed: ‘All of our money is going into this. It is a money pit.

‘I always wanted to build our own home and Amy found this place on the internet. The extension was the key and the only way we could bring all the buildings back into use.’

The contemporary design helped gain planning permission and crucially for planning, it gave the site a new purpose – one enormous family home.

The couple hoped the ultra modern glass link would connect each of the buildings together, including a swimming pool, a garden room and a spacious kitchen diner and lounge. 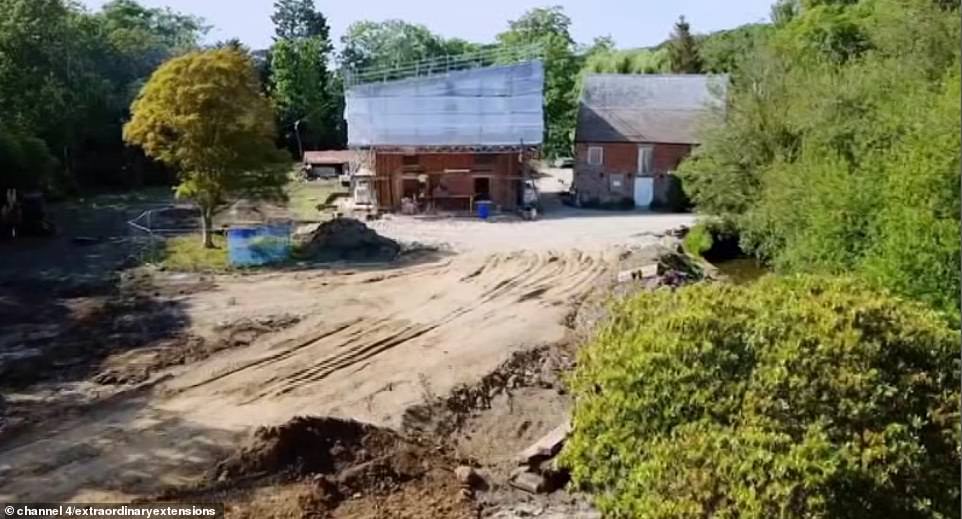 Simon confessed one of the largest expenses were the glass panels, which they ordered from Portugal, costing ‘approximately £179,000’.

He admitted: ‘The overall budget is approximately £1 million. That’s us doing it ourselves, being very hands-on through this process.

‘I don’t get a lot of time to sit down and look at all the figures. But at this stage we’re on budget. I mean the budget can go out the window when you start looking at the finishes.

‘Budget could still go out the window but I think we’re on track.’ 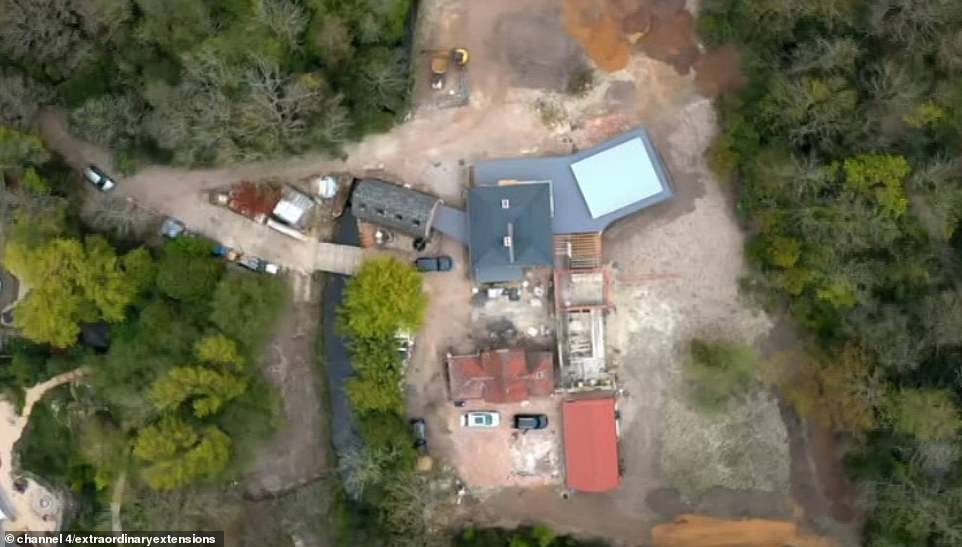 The professional gambler said he had always dreamed of building his own home, and hoped to connect the three older period buildings with the ultra-modern glass extension 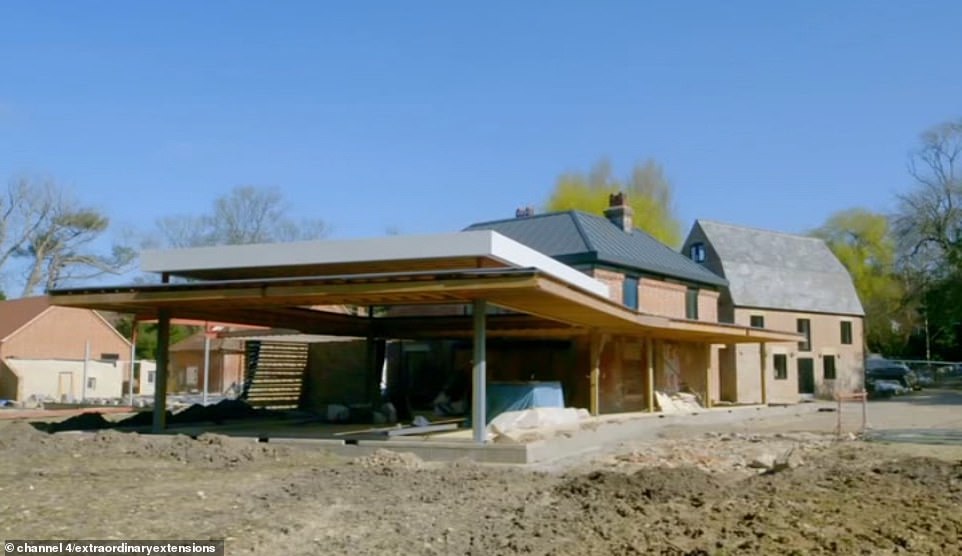 Simon confessed one of the largest expenses were the glass panels, which they ordered from Portugal, costing ‘approximately £179,000’ (pictured before the panels were installed)

When the 19 panes of glass arrived in June 2021 it was a momentous day, with Simon saying: ‘It’s nice to see it here in one piece.’

The first task was the simple job of lifting over five tonnes of glass off the truck and onto the building site. Then a spider crane precisely maneuvered each pane into position. Any sudden movements could damage the glass, costing thousands and delaying the build.

After a nervous watch and six hours later, most of the glass was in, and Amy was left in floods of tears.

She said: ‘Now it’s almost all glazed it’s just so exciting. It feels like a room, all of a sudden, and it feels real. I can’t wait to get it all finished now.’ 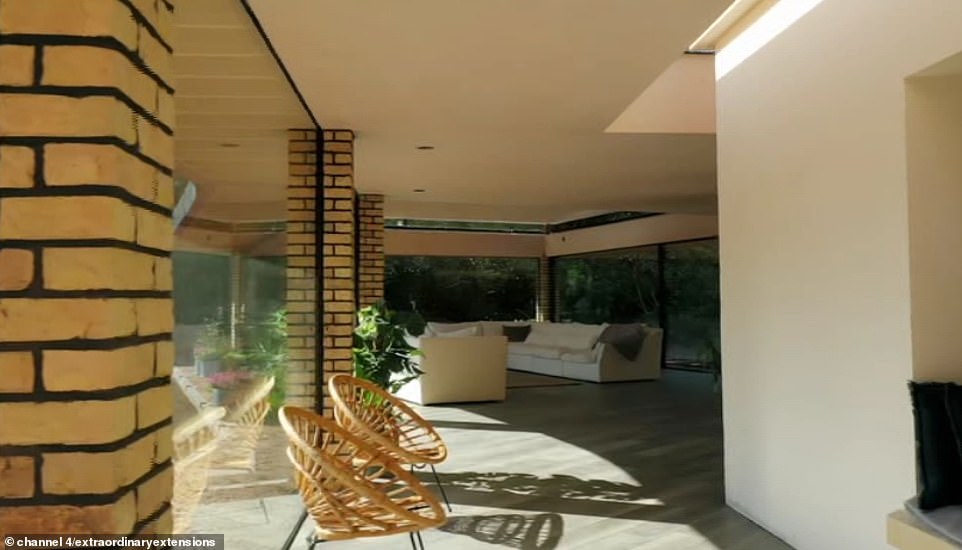 After eighteen months, the couple had finished the project and completed their enormous glass wrap around extension (pictured)

But a few weeks later, the unthinkable happened, with Simon confessing: ‘We had a huge downpour of rain over the past month which highlighted a few problems to us.’

There was an issue with the glass and frames which caused the windows to leak. As a result, all 19 panes of glass had to come out.

Simon said: ‘All of this is quite challenging, I’m not going to lie, it does affect you mentally. I think it’s going to hit us later on how much we’ve got to do still.’

With the glass removed, the structure was back to square one. 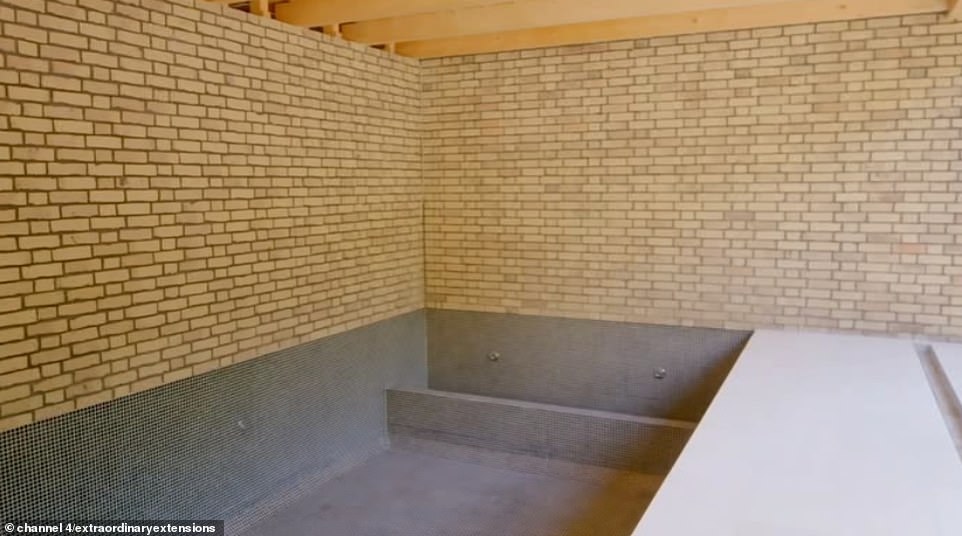 Among the rooms within the huge structure were a living and dining space, a sun room as well as a resistance pool (pictured)

By July 2021, the couple were determined to get the build back on track by lying underfloor pipe for heating.

But Simon said he was feeling the stress from the project, adding: ‘If it was really easy  to do this then everyone would do it. But it isn’t easy and it’s not for everyone and it certainly has put a lot of strain on us.’

Eighteen months after construction began, Tinie arrived to see the extension in all it’s glazed glory.

Amy and Simon said they felt ‘tired’ and were ‘working really hard but were ‘excited to see the progress.’

After Tinie asked about the timeline, Simon said: ‘It hasn’t been as seamless as we’d like. It’s hit us with a six week delay, which means we haven’t been able to get on with other things. Labour has been one of the bigger things for us and the prices have been crazy. 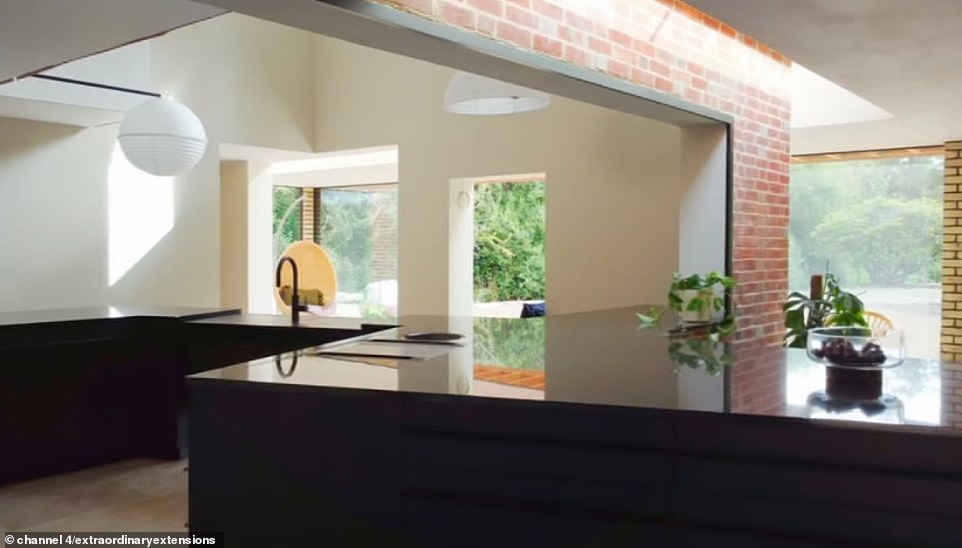 By the end of the summer, the couple had finished their enormous minimalist extension with a geometric kitchen and a huge sitting room with minimal furniture

By the end of the summer, the couple had finished their enormous minimalist extension with a geometric kitchen and a huge sitting room with minimal furniture.

Simon said: ‘We’ve had a few late nights, we’ve been working really hard. We can start to see the vision we had all those years ago starting to come to reality.

‘It’s been very hard. We’ve both done property before, but nothing on this scale. But it’s a real labour of love.’ 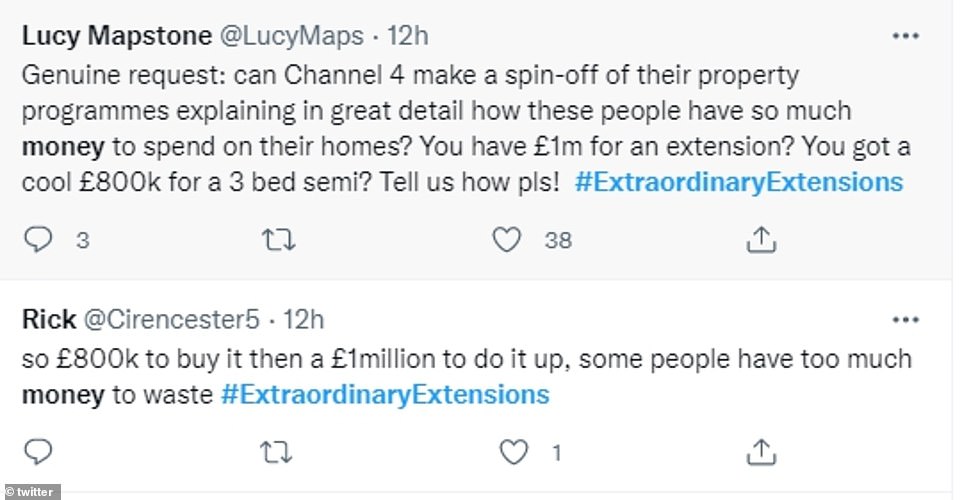 Beyond the kitchen was the sun-lit garden room, as well as the resistance pool.

When Tinie asked if they would do it again, the couple told him: ‘No, never again. This is our home and that is it now.’

Meanwhile they admitted they had over spent by £100,000, with Simon adding: ‘The budget is going to be quite close to that. Materials have gone up recently hugely which has affected our budget. I think we’re going to come in around £1.1 million.

‘But to do the amount of work we’ve done for that amount of money is incredible.’

However many viewers were left stunned by the couple’s attitude towards the expensive spend, with one writing: ‘£1.1 million extension. Needed a better brickie, that pointing was shocking.’

Another commented: ‘Watching these type of programmes, they all must have a money tree in the garden, ones I’ve got never seem to grow. With budgets at half a million and a million pound for the other.’

A third wrote: ‘All that money, I would have sacked the bricky on the wrap around extension.’