Viewers fell in love all over again with Channel 5’s Our Yorkshire Farm as the show aired a retrospective episode last night.

The series, which has been airing since 2015, follows the life of shepherds Amanda, 45, and Clive Owen, 66, and their brood of nine on their farm in Upper Swaledale.

The couple run the 2,000-acre tenant farm where they manage their flock of around 1,000 sheep and run a B&B while raising their ‘free-range’ children – ranging from three-year-old Raven to Raven, 19.

At 6ft 2in Amanda was encouraged to follow the same career path as her model mother, but hated the clothes and make-up that she had to wear, and became entranced with the idea of farming after spotting a book on shepherding.

She’s since created her ‘dream life’, and last night’s show looked back on how the Owen family has evolved since the programme aired five years ago, with viewers praising Amanda and Clive for the way they’ve raised their family.

The family back in 2015 when they featured on Ben Fogle’s New Lives In The Wild. At the time, their eldest was 14-year-old Raven and Clemmie was just five-weeks-old. They’ve since had their ninth child, three-year-old Nancy 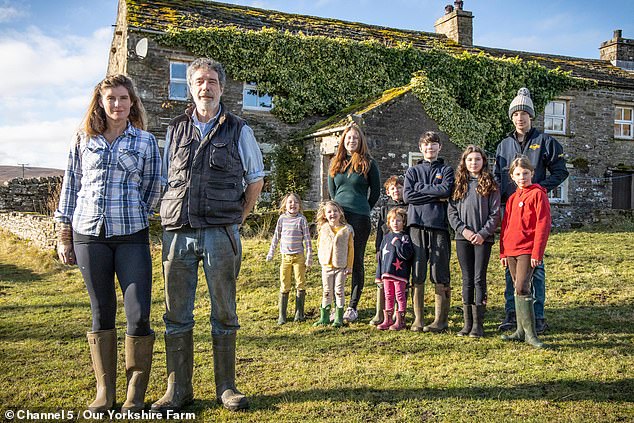 Viewers were as impressed as ever after Channel 5 aired a five-year special of Our Yorkshire Farm, looking at how the Owen family (pictured) evolved in the five years since the show started in 2015. (Amanda, 45, with Clive Owen, 66 and their nine children: Annas, Clemmie, Nancy, Raven, Sidney, Miles, Violet, Edith and Reuben ) 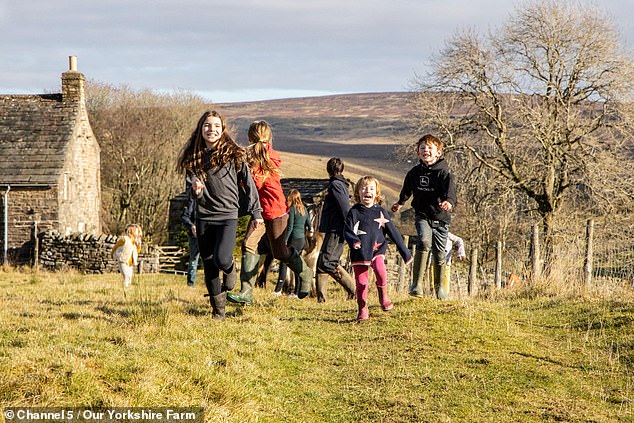 Viewers witnessed how the Owen managed their dynamic brood of nine, who all had chores to do around the farm

When the show started, eldest daughter Raven was in high school, where she hoped to go to university to become a vet, after her passion for animals blossomed on the farm.

Now Raven, who Amanda said had done a ‘great job at helping with the little ones,’ had officially left the nest to go to university and make her dream come true.

She shared her excitement and apprehension at the idea of living alone after years of growing up in a full house where you always ‘bump into someone,’

Meanwhile, viewers saw how teenager Reuben, who was about 11 when the show started, grew into a handy 16-year-old, having developed a flair for mechanics, which he shares with his younger brother Sidney. 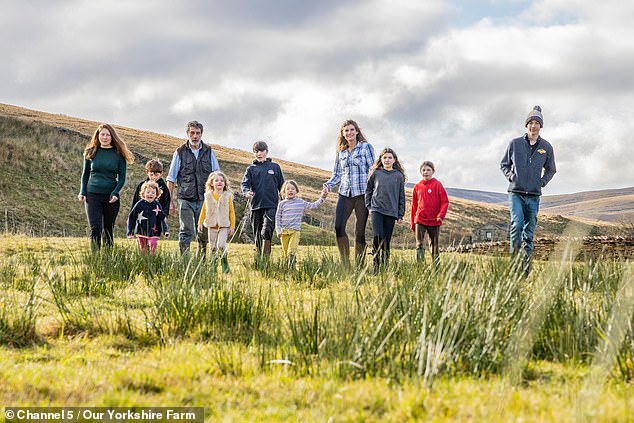 The Owens started sharing their lives with viewers in July 2015, when the show first aired, The children have grown in the lens of the camera

Amanda explained that Miles, one of the more demure Owen children, has cultivated a love for hens and chickens by caring for them from early childhood.

Edith and Violet, the middle daughters of the Owen clan, have become known for their mischievousness and solid friendship.

Fans were also reminded of how Sid, who Amanda said always looked up to his older brother Reuben, has taken to following the teenager to the workshop where he was learning all about mechanics.

Annas, who was only a toddler when she show started to air, grew into a ‘brave’ seven-year-old, according to her mother.

The show also looked back at the Owen’s youngest daughters, who were born after the show started to air.

Viewers got a look back at how Amanda gave birth to Clemmie by herself on the farm after she was stuck without help.

Clemmie, now four, has since grown up into a boisterous toddler who is not afraid to step in and help her parents around the farm.

Throughout the latest series, Clemmie, who preferred to stay on the farm rather than going to pre-school, was shown helping her mother herd their sheep and facing the reality of animal farming dead on.

In an impressive segment from a former series, the four-year-old was shown remaining calm and curious as her father skinned a lamp in front of her.

‘You can’t shield them from reality,’ Amanda explained.

Meanwhile, the programme showed how toddler Nancy, three,  is following into her siblings footsteps. 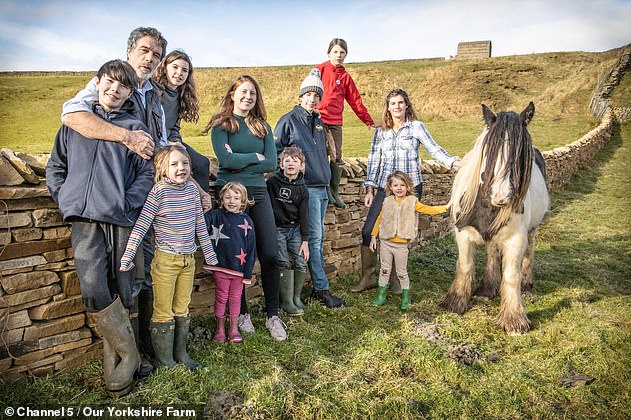 The show also looked back on how Amanda and Clive faced hardships head on and powered through to raise their impressive brood on the Yorkshire domain.

On the show, the children have been shown taking on responsibilities around the farm, helping their parents with their sheep, hens or gardening, never complaining and enjoying what the beautiful Yorkshire plains had to offer.

It was Reuben who, in 2015, explained to viewers how him and his siblings were helping with running the farm.

‘I don’t mind. Everyone’s got a job, Miles got chicken, I got calves, there’s lambs and things to feed, so you;re always busy,’ the then 11-year-old said.

‘I’m hoping that the jobs they have to do, they realise it’s an important part of the family. And in order to make a big family work, they all need to toe the line,’ Amanda explained.

The mother-of-nine admitted raising her large brood was a ‘logistical nightmare.’

‘You have one, then it’s two, it’s just double trouble. Then you have three, it’s just a bit more pressure. Four it’s a bit extra, five, it don’t matter anymore,’ she said.

Viewers praised the Owen parents for raising a ‘wonderful family,’ and expressed their admiration for their kids as well.

‘What wonderful parents you are Amanda & Clive, your children are fabulous & a credit to you both,’ one said.

‘Just seen on Channel 5 +1 ‘Our Yorkshire Farm [5 years…]’ What a wonderful family & how parenting should be in bringing up an English family. Lovely family. Lovely programme. A must see,’ said another.

‘During this programme (and all the others in the series), my husband and I sit here with big daft grins on our faces! It’s such a beautiful testament to the way you run your lives. Your children are growing into amazing individuals due to you both. Love,’ wrote one.

‘Simply excellent television – what a wonderful family,’ commented another.

‘Just watched the last 5 yrs on “Our Yorkshire Farm” what a great life you and Clive made for yourselves and your brood of nine,’ one applauded.

‘How amazing are the children! What a fabulous job you’ve done Amanda and Clive,’ said another.

Amanda, from Huddersfield, traded the rat race for the sheep amble,. Amanda appeared on Ben Fogle’s programme New Lives In The Wild in 2015 and explained she then feed ten mouths on just £130 a week.

Amanda grew up in a traditional three-bed house with her parents and one sibling in the large market town of Huddersfield.

At 6ft 2in she was encouraged to follow the same career path as her model mother, but she hated the clothes and make-up that she had to wear.

Then one day, she chanced upon a book about shepherding.

‘It was the pictures, the landscape, the haggard faces of the men gathering in the fells, and the dogs… I thought “that’s my dream”,’ she said on the Channel 5 show.

‘In fact I couldn’t believe that kind of life really existed,’ she added.

Amanda left her comfortable town life to work on farms around the country, but it’s when she knocked on the door of Ravenseat Farm that she found her calling.

‘I was destined to come here – I’m absolutely sure of it,’ she said.

Clive, 42, lived on the 2,000-acre plot of land and, despite the 21-year age gap, the couple quickly fell in love. Since marrying in 2000, they have had eight children together. 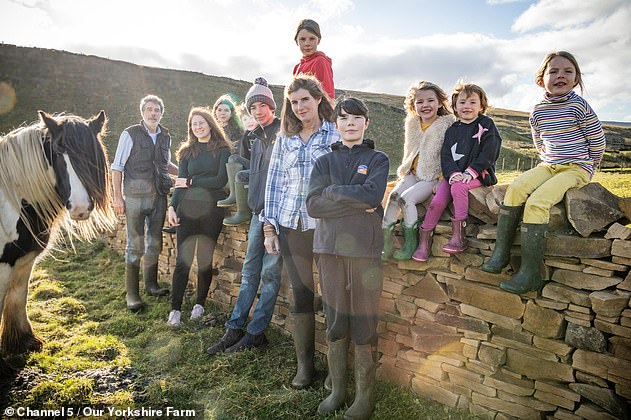 Amanda said she did not want to shield her children from reality, as the little ones were faced with animals dying on the farm

Many of them help out on the farm when they are not at school – or travelling to and from as the journey takes one-and-a-half hours each way.

Their traditional way of life helps keep costs down, too.

With the nearest shop so far away – and the risk during winter that they could be snowed in for weeks – Amanda buys food in bulk, and manages to feed her large family for just £130 a week.

Their water is free, channelled from the stream on the moor, and they heat the house and water with a roaring fire, which burns every day no matter what the weather.

The biggest utilities bill is electricity, which costs £160 per month.

They pay for their annual tenancy in the stone farmhouse with the profits made from farming – although this can be a struggle with 2,000 kilos of sheep’s wool going for just £65.