Harrowing footage shows the distressing moments two aged care workers pulled the hair of a 92-year-old and pushed her into bed with her broken leg.

Ed Robins hid a camera in his mother’s Morrison Lodge nursing home room in Perth, following suspicions that she wasn’t been handled appropriately by staff.

Mr Robins’ concerns rose when he noticed unexplained bruising on his mother’s arms and legs.

His worst fears were confirmed, when the footage showed his frail mother, Jean, being pinned down and roughly handled by two workers.

The rough handling resulted in bruising and skin tears, Mr Robins told ABC’s Four Corners in the second part of their investigation into the failings in aged care.

The heartbreaking video shows aged care workers forcefully pressing the 92-year-old into the bed, throwing a stuffed teddy bear in her face and dropping her broken leg onto metal railings.

Mr Robins planted the camera in his mother’s room just after she broke her leg and captured footage over three weeks.

With her dementia worsening, Mrs Robins would attempt to get out of bed herself, despite not being able to walk.

The video shows the workers pushing her down in the bad, pulling her hair, pushing her head down and dropping her broken leg onto metal railings.

Quickly becoming agitated, Mrs Robins is seen pushing the staff off her and saying: ‘Don’t pull my hair’.

‘Mum was in pain, obviously, putting her hands up to protect herself, and they’re throwing her leg in,’ Mr Robins said.

The women are also seen laughing as they roughly push the 92-year-old onto the bed.

In one instance, Mrs Robins was left lying on the floor for more than 20 minutes calling for assistance before staff came to her aid.

Mr Robins’ took the footage to police, who charged Glenda Lua, 40, and Luz Ando Freeman, 63, with mistreating Mrs Robins between September and October 2016 – both women were terminated from their positions. 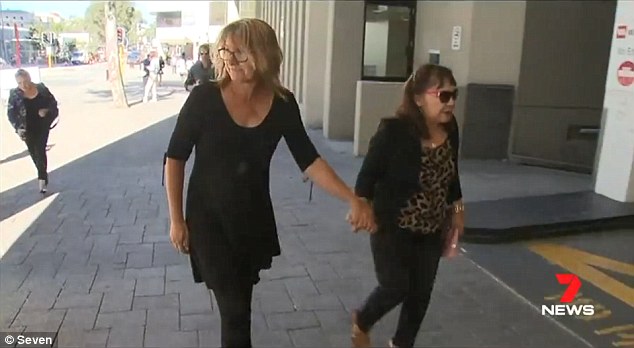 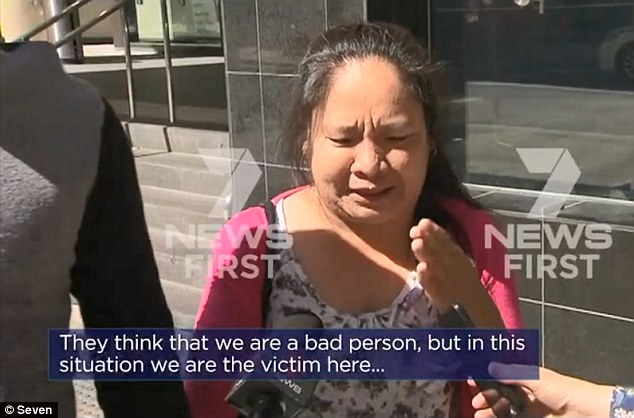 Glenda Lua (pictured) told 7 News that herself and Luz Ando Freeman were the ones that were suffering throughout the entire ordeal.

The women claimed that the elderly woman was ‘difficult to care for’ and compared her behaviour to that of a two-year-old child.

Magistrate Greg Smith threw out all charges against the women, saying they were ‘run off their feet’ and that it was Mrs Robins who was ‘violent and abusive’ towards the workers.

Outside court, Ms Lua told 7 News that herself and Ms Freeman were the ones that were suffering throughout the entire ordeal. 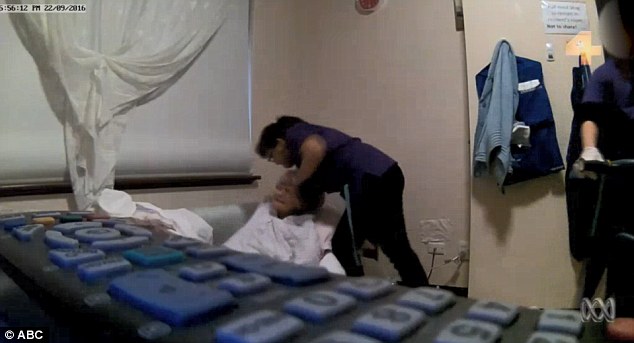 ‘Maybe in a long time but not at this moment … because they think that we are a bad person, but we are the victims here,’ she said.

‘Terminating us at work, that’s not fair, because we work hard, we care for all the people.’

More families have been sharing harrowing footage with Four Corners of their vulnerable loved ones crying for help in aged care homes across the country.

In August last year, an 85-year-old woman with dementia, whose identity is protected, was slapped in the face by a worker who was dressing her.

Care worker Dana Gray was working at The Poplars, in Epping, NSW, for four years and it seems that the vulnerable woman in the video wasn’t her only victim.

The footage was recorded by a male employee who worked with her and feared for the safety of residents. 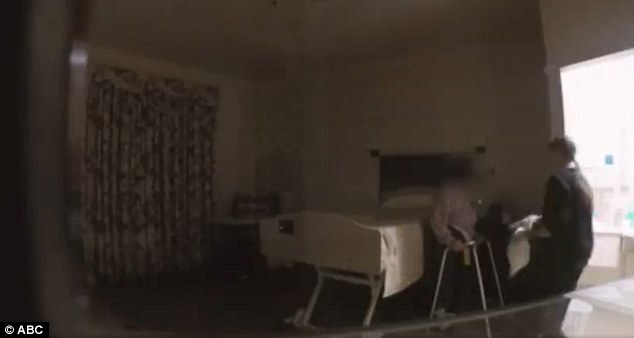 In August last year, an 85-year-old woman with dementia was slapped in the face by a worker who was dressing her

As Gray puts a nightgown on the woman, she uses it to pull at her neck before grabbing her hair and dragging her head from left to right.

The patient – who was physically and mentally impaired and entirely dependent on full-time care – sobbed, screamed and was in clear distress during the incident, the facts reveal.

Afterwards, Gray left her bed in such a high position that she couldn’t access it to sit or lie down ‘for a number of hours’.

Present and former aged care staff also appeared on the program to share their harrowing experiences about working in the field.