A traditional village pub has been dropped from the Good Beer Guide – for being too popular.

Snooty reviewers marked down the award-winning Holly Bush Inn – a picturesque 17th century watering hole – as they found it too busy, there were children in the bar and they served food at lunchtime.

It means that the pub in the village of Makeney near Belper, Derbyshire, won’t be in the new edition of the real ale drinkers’ ‘bible’ for the first time in ten years – despite recently getting a ten-out-of-ten rating from the prestigious European Bar Guide.

Landlady Alex Wilbraham told MailOnline: ‘From a business perspective we invited the Amber Valley chairperson in to come and explain to us why we hadn’t got selected. He explained that we were a busy pub and that the scorers of CAMRA weren’t served straight away.

‘You get served relatively quickly but because it’s an old pub, it only has one bar and we can’t expand the building so you might have to wait a few minutes for a drink.

‘We’ve kept it traditional and like a proper pub and this kind of place should be championing the list.

‘Another reason they gave is that children can come into the pub. We do have children that come into our pub, but there are areas where children aren’t allowed.

‘The only place children can go is the back room and the conservatory where we do food.

‘We don’t encourage children to come in as we don’t have a play area but not all drinkers are child free people and we want to make sure everyone can enjoy a drink at the inn. We have children ourselves so we understand.

‘We also accept that people want child free time, and this is why we have the no children areas.

‘The third reason CAMRA gave for not making the list was because we serve food.

‘Other entries into the beer guide aren’t open at lunch time and only open in the evening.

‘We are a destination pub, and we have to have an offering in the day to keep our staff employed and we also need to offer walkers and visitors something in the day.

‘Us serving food was something that was held against us. The food is very popular and it is not chain food. We stick to traditional pub food that adheres to all dietary requirements.’

Snooty reviewers marked down the award-winning Holly Bush Inn – a picturesque 17th century watering hole – as they found it too busy, there were children in the bar and they served food at lunchtime 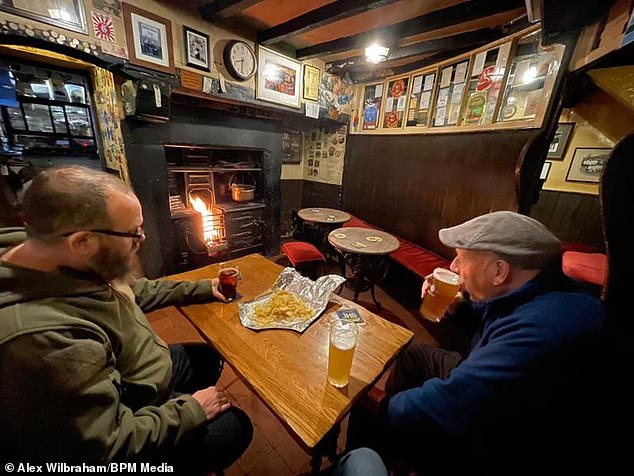 It means that the pub in the village of Makeney near Belper, Derbyshire, won’t be in the new edition of the real ale drinkers’ ‘bible’ for the first time in ten years 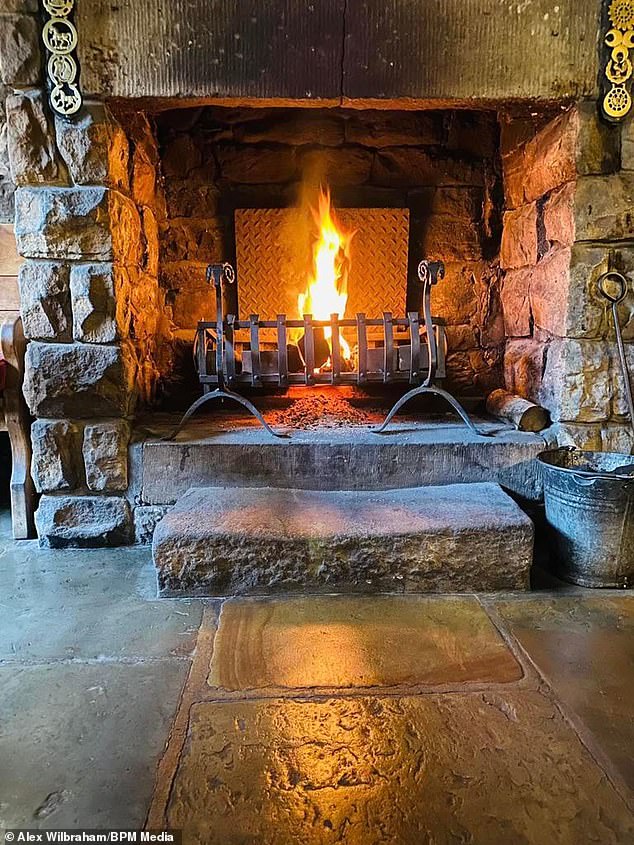 The pub, which boasts a traditional snug bar also has open fires – and no televisions

The pub, which boasts a traditional snug bar also has open fires – and no televisions.

Alex added: ‘We are in support of CAMRA, and I don’t want this to come across as us being sour grapes.

‘First and foremost it is about the pub and this pub is brilliant and a great example of a traditional inn.

‘It’s full of history and the stories that come with the pub are amazing. As we lead up to Christmas it’s a tradition for people to visit the inn and come along for a drink with their families.

‘It’s a well-loved pub and it’s a shame the Holly Bush Inn hasn’t been recognised on their list this year.’

Ian Goode, 62, and his partner Kim Smith, 68, had just enjoyed some pub grub and a real ale pint sitting by the fire in the Inn.

Ian, who travelled from Mansfield to visit the pub told MailOnline: ‘The CAMRA is supposed to be about whether the pub serves real ales.

‘All you have to do is look at the bar and see the variety they have on offer. I can’t believe they didn’t get picked.

‘It’s one of the most historic pubs in the area never mind anything else.

‘While there are pubs in the area that you can go to which will be quieter but this pub is just very popular so it is bound to be a little busier and that shouldn’t be a bad thing.

‘To find a nice pub with an atmosphere in it is hard and this is what the inn offers. We’ve walked past four pubs to get here, and we’ve chosen this one. That says it all.’

Kim, Ian’s partner, who lives just over the fields from the Inn said: ‘It’s like any pub, isn’t it? A good pub is always going to have busy times and that isn’t a bad thing.

‘We probably visit here a few times a month. The food is brilliant, and we come for that most because we aren’t massive drinkers. The whole atmosphere of the place is amazing.’

Neil Fletcher said: ‘It’s ridiculous that CAMRA limits the number of pubs included in each region.

‘There may be loads of great pubs in the area, but we’re only going to talk about some of them. How is that promoting real ale?’

One local said: ‘It’s a fantastic watering hole – CAMRA represents just a minority – no-one pays any real attention to what a few beer buffs have to say.’

Another said: ‘It’s nonsense – this is the perfect pub like every village should have. Alex is a brilliant landlady and everyone is welcome.’ 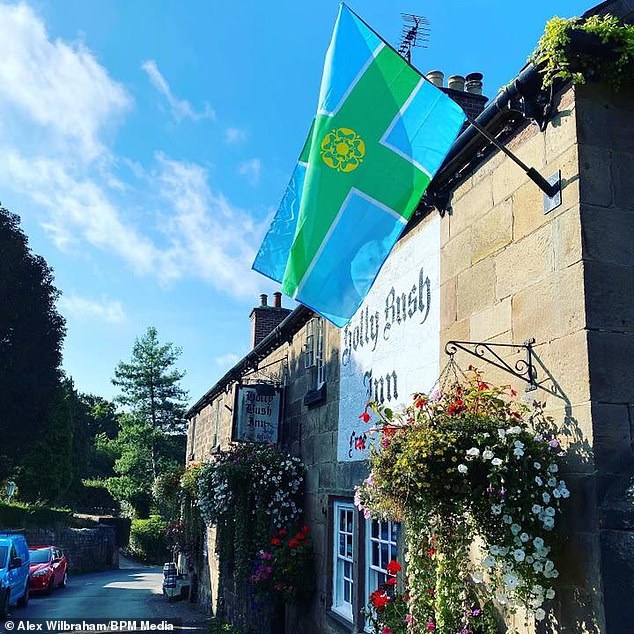 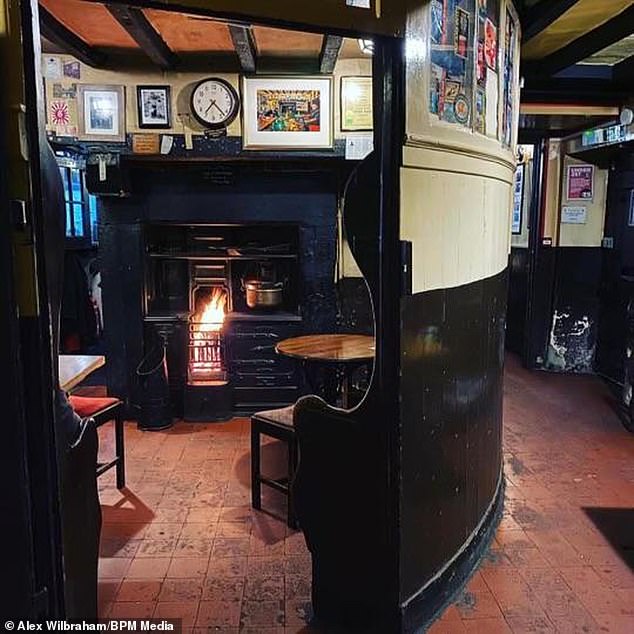 CAMRA was founded in 1971 and annually publishes the ‘Good Beer Guide’, listing 4,500 of the best UK pubs, clubs and off-licences – this year is the 50th anniversary edition

CAMRA’s Regional Director for the East Midlands, Robert Hamnett-Day, said: ‘The Good Beer Guide is based entirely on personal recommendations made by local CAMRA members, which are rigorously reviewed by branches and editors.

‘Recommendations consider beer quality as well as the history and architecture of a pub and various aspects such as food, gardens, family and disabled facilities and special events.

‘We appreciate that exclusion from the guide can be frustrating. The fact of the matter is that there are only so many listings available per region, and the competition in Derby was fierce. We wish the Holly Bush Inn the very best of luck with future inclusion and will continue to support it as a branch however we can.’

CAMRA was founded in 1971 and annually publishes the ‘Good Beer Guide’, listing 4,500 of the best UK pubs, clubs and off-licences – this year is the 50th anniversary edition.

The featured establishments are voted for by the members of regional CAMRA branches – there are hundreds all over the country in sixteen regions.