Liberal Democrat leader Vince Cable warned today that a No deal Brexit would see the UK wander into a global trade ‘battlefield’ between the United States and China, saying he would try to avoid it happening.

Sir Vince, 76, who has announced his is to step down, insisted that there was a ‘majority to stay’ in the EU after his party beat the Tories and Labour in an election for the first time in 100 years.

His party came second behind the Brexit Party in the European vote, winning 14 seats to add to the one they held before Thursday.

And Sir Vince took a swipe at those like Nigel Farage, who have advocated leaving on World Trade Organisation (WTO) trade terms.

The Lib Dem leader, who backs a second referendum, told Sky News: ‘There is no such thing at the moment as WTO rules.

‘The World Trade Organisation system, the rules-based system of trade, which operated until quite recently is in the process of collapsing.

‘Those people who say ”let’s have WTO rules” want us to wander into the middle of that battlefield – that is the reality and that is why the argument has moved on so fundamentally since where we were three years ago.’ 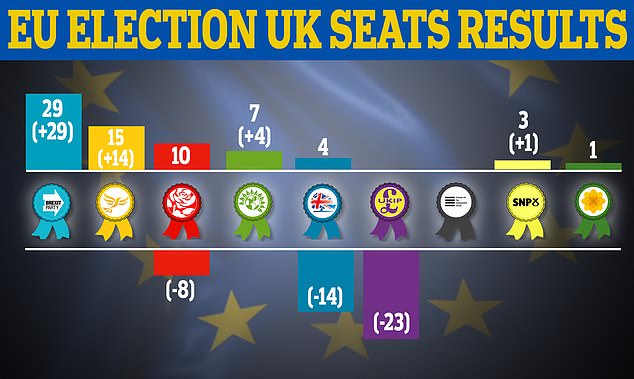 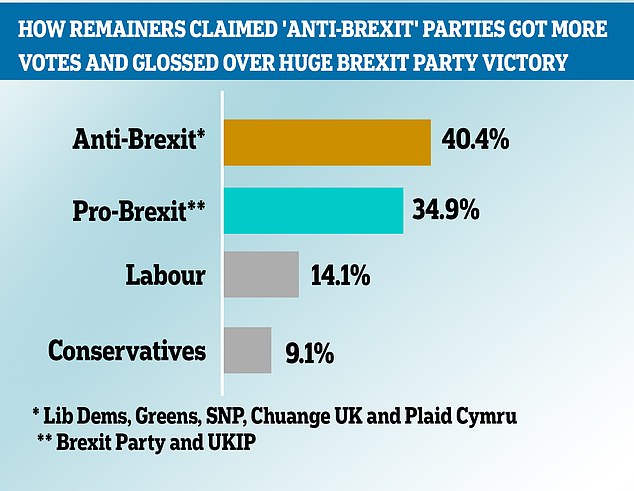 The Lib Dem election surge came as they sucked up Remain votes from Labour and the Tories. And it forced the new centrist party Change UK to beg them for a merger.

The party formed by Labour and Tory defectors did not bag a single MEP. But leader Heidi Allen said that the new centrist party was ‘down but not out’ last night.

Change UK MP Chuka Umunna said on Saturday that the two parties should form a pact not to stand against each other’s candidates in the next general election. And yesterday Mrs Allen, who left the Conservatives to join other breakaway Tory and Labour MPs, said she would go ‘one step further’. ‘I would like us to be in the same vehicle,’ she told BBC Radio 5 Live. Asked if she meant the same party, Mrs Allen replied: ‘Yeah, probably.’ 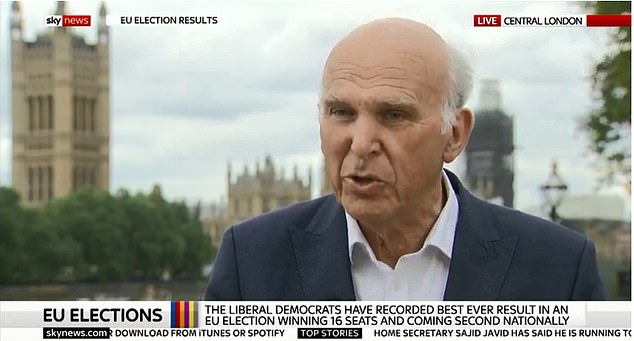 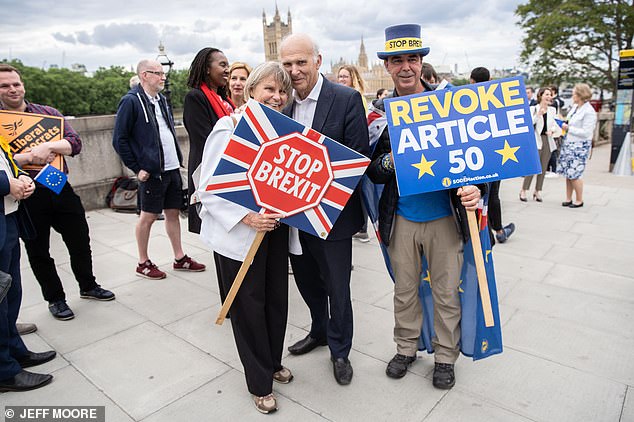 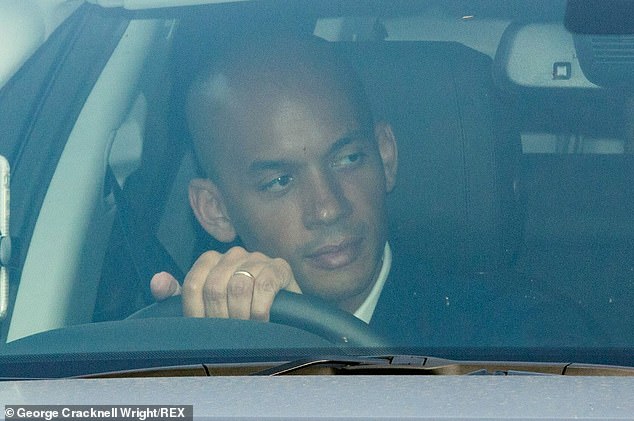 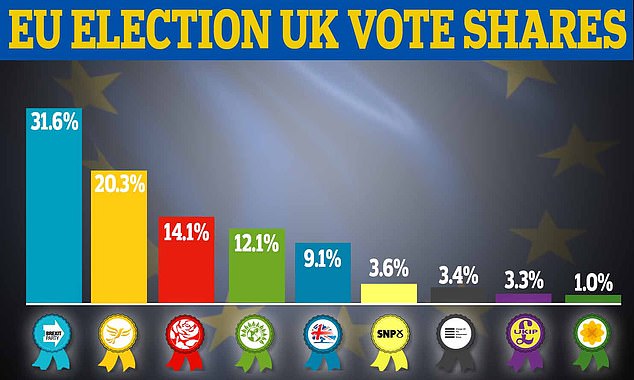 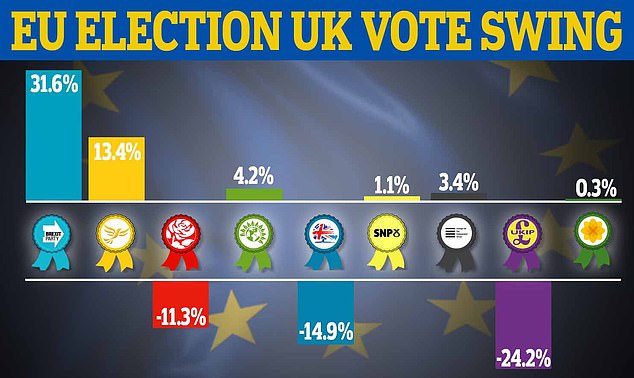 The Lib Dems were ‘cock-a-hoop’ at their expected performance last night, taking votes from Labour supporters angry at the party’s equivocal stance on Brexit.

Turnout was said to be higher in Remain areas than in Leave ones, meaning the Lib Dems were on course to do even better than predicted. At the last European elections in 2014, towards the end of the Coalition period, the Lib Dems performed disastrously – taking only one seat. The Greens also looked set to outperform Change UK last night.

In the weeks following its formation, Change UK figures were talking confidently of replacing the Lib Dems as the third party in British politics. But yesterday Mrs Allen admitted that it was more likely that her party would have to join forces with the Lib Dems. 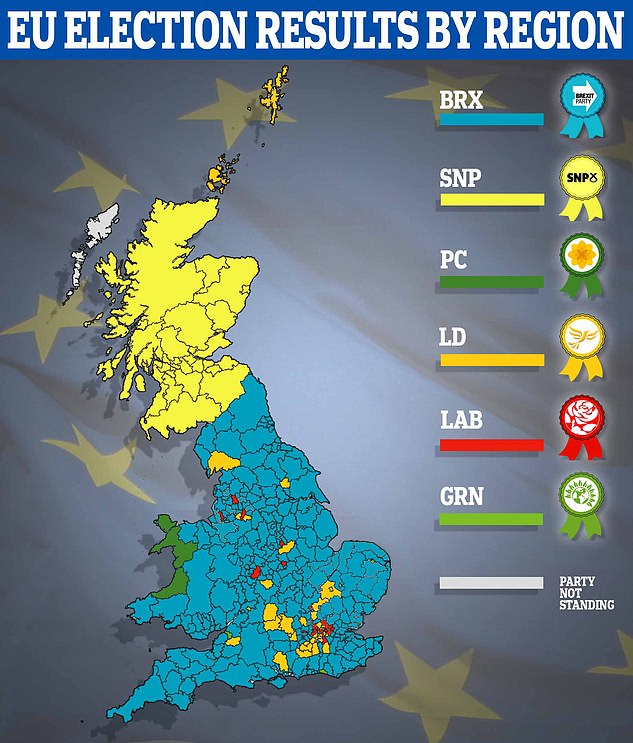 ‘I think we are sensible enough to know we can’t do it on our own,’ she said, adding: ‘I don’t know what the format will be, but will we be singing from the same hymn sheet? I would hope as a collective, let’s call us a collective, somewhere in the middle with other like-minded colleagues.’

Mrs Allen said that to be a ‘real insurgent force’, the alliance needs to be ‘brand new’ rather than a larger Lib Dem party.

She predicted that more Tory MPs could desert the party if Boris Johnson becomes prime minister, while Labour MPs may also defect if Jeremy Corbyn continues to refuse to commit to a second referendum.

However, she added that while the Brexit Party may do well in the EU elections it should not be part of any future Brexit negotiations.

‘I don’t think so. They need to earn some MPs to get that,’ she said. 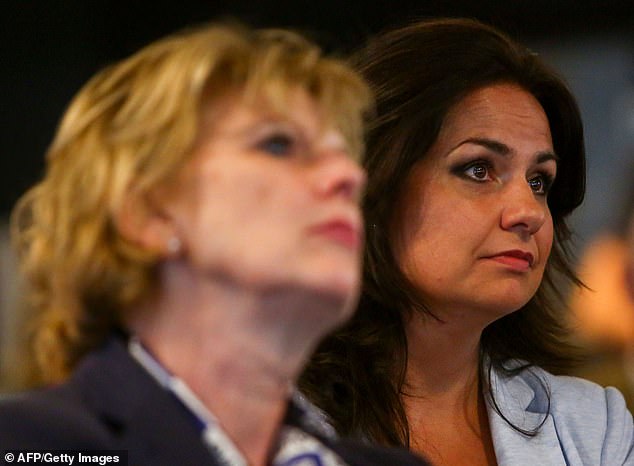 Meanwhile, projections indicated Change UK would not bag a single MEP. But leader Heidi Allen said that the new centrist party was ‘down but not out’ last night