A violent brawl erupted on a P&0 cruise when a man dressed as a clown was confronted by another passenger for breaching the ship’s strict no-costume policy at a black-tie event.

The fight started on board a P&O Britannia cruise with families running to hide as passengers reportedly used plates and furniture as weapons.

According to witnesses, the violence began 12 hours after a booze-fuelled ‘patriotic’ black-tie event on board the cruise ship.

According to witnesses, the violence began 12 hours after a booze-fuelled ‘patriotic’ black-tie event on board the cruise ship

Emergency services were called to the ship’s 16th floor restaurant at 2am on Friday morning.

Revellers were upset after one guest dressed up as a clown in spite of the ship’s no fancy dress code.

The fight quickly turned violent when guests started hurling objects at each other while staff members tried to intervene to stop the fight, it was reported.

The violence occurred on the final leg of a week long cruise to Norway’s fjords that was en route back to its Southampton port. 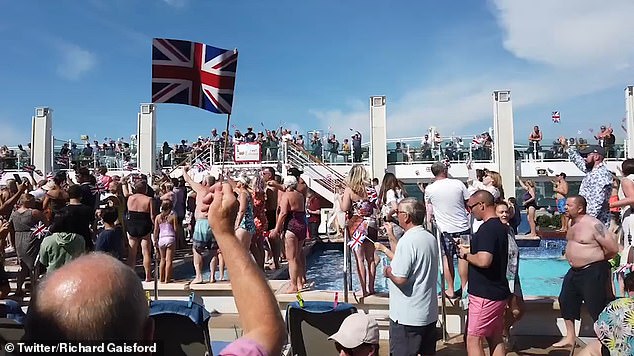 GMTV correspondent Richard Galsford tweeted that a witness told him that there was ‘blood everywhere.’

He added: ”The buffet area was immediately sealed off as medical teams went to help the injured.

‘Staff told me they’d never experienced anything like it and those behind the violence were confined to a cabin for the last day of the cruise, waiting for police here in Southampton.’

The buffet area was sealed while medical teams tended to injured staff and those who started the fight were moved to their cabins.

The ship arrived back to its home port in Southampton this morning and will depart on a Mediterranean cruise later today.

A P&O spokesman said: ‘Following an incident on board Britannia on Thursday evening we can confirm that all guests have now disembarked and the matter is now in the hands of the local police.’

Hampshire Police confirmed that investigations are ongoing and will make an announcement shortly.