Virgin Atlantic has said it will fly to 24 destinations in 2021 after Sir Richard Branson sold £405million of shares in Virgin Galactic to save the under-pressure airline.

The aviation industry has suffered severe financial issues due to travel restrictions imposed by countries’ trying to stop the spread of the coronavirus epidemic.

But many airlines are now planning for the future, with Wizz Air and Ryanair both announcing summer flights as the lockdown starts to ease across Europe.

However it comes as the Government admitted foreign summer holidays this year would have to be cancelled – and said international travellers into the UK will have to tell border officials where they will self-isolate for 14 days or face being quarantined.

Now, Sir Richard’s airline has announced a raft of new flights from London Heathrow, Manchester, Glasgow and Belfast from next summer – on sale from this Saturday. 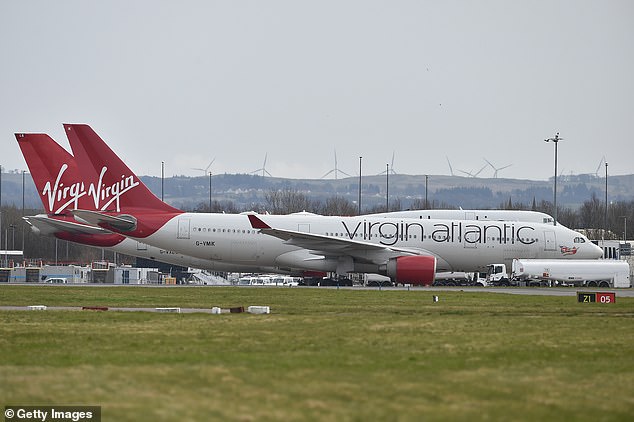 Virgin Atlantic planes on the runway at Glasgow Airport on March 21, just before the lockdown

Virgin Atlantic confirmed today it will operate the flights from UK airports to 24 destinations in summer 2021, using only twin-engine aircraft.

It expects to ‘steadily increase’ flights in the second half of this year, before a ‘further, gradual recovery’ in 2021.

Which destinations will Virgin fly to?

The Heathrow to Tel Aviv service will increase to twice per day.

The airline announced last week that it will not resume Gatwick flights, will reduce its workforce by 3,150 people and will not return to using its seven Boeing 747-400 aircraft, which have four engines.

Chief commercial officer Juha Jarvinen said: ‘As the Covid-19 crisis stabilises and demand gradually returns, we are looking forward to welcoming our customers back and flying them safely to their favourite destinations.

‘We have taken the opportunity to pause, reflect and reshape our 2021 flying programme looking at efficiencies in our fleet and connectivity across our network, to ensure it is fit for the future, flying to the destinations we know our customers love to fly.

‘We’re delighted that our popular Tel Aviv service, which launched in September 2019, will now increase to double daily, whilst regional flying from Manchester, Glasgow and Belfast will continue to play an important part in offering choice to customers and connecting UK travellers to Orlando, Barbados, Atlanta, New York and Los Angeles.’

It emerged on Monday that Sir Richard is selling a £400million stake in his space exploration business to prop up the rest of his ailing empire. 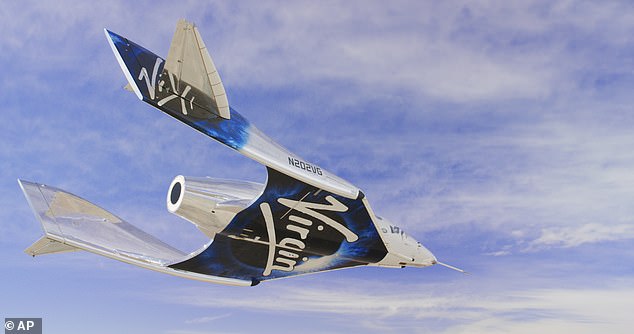 The billionaire, who has already been slammed for seeking taxpayer support to save struggling airline Virgin Atlantic, plans to sell 25million shares or 12 per cent of New York-listed Virgin Galactic.

Foreign summer holidays are off, says Matt Hancock despite Ryanair planning to restore 40% of flights

Health Secretary Matt Hancock has warned that people are unlikely to be able to go on foreign holidays this summer, despite Ryanair planning to restore 40 per cent of its flights from July.

Asked whether ‘summer was cancelled’, Mr Hancock told ITV’s This Morning: ‘I think that’s likely to be the case.’

He added: ‘It is unlikely that big, lavish international holidays are going to be possible for this summer. I just think that’s a reality of life.’

The Foreign and Commonwealth Office has advised against all but essential international travel since March 17, while domestic holidays are not allowed due to the Government’s lockdown orders issued six days later.

The plan involves 90 per cent of the airline’s pre-Covid-19 route network being restored, but on reduced frequencies.

Since mid-March it has operated a skeleton daily schedule of 30 flights per day between the UK, Ireland and the rest of Europe.

Passengers and crew will be required to wear face masks or face coverings, and pass temperature checks.

Queuing for toilets will be banned, but ‘toilet access will be made available to individual passengers upon request’, according to the airline.

A limited range of refreshments will be sold on board, and no cash will be accepted.

Ryanair said all surfaces in its cabins will be disinfected every night with chemicals which are effective for more than 24 hours.

The carrier will require all passengers flying in July and August to complete a form when they check in, stating how long their visit will be and where they are staying.

His company Virgin Group said it would use the proceeds ‘to support its portfolio of global leisure, holiday and travel businesses that have been affected by the unprecedented impact of Covid-19’.

Virgin Atlantic, in which Branson owns a 51 per cent stake, is fighting for survival after the coronavirus pandemic caused it to cancel thousands of flights.

It has already cut 3,150 jobs and announced it will end its presence at Gatwick Airport, while its sister airline Virgin Australia has gone bust.

Sir Richard was hoping to secure a £500million government-backed loan for Virgin Atlantic and had even offered to put his luxury Caribbean retreat Necker Island up as security against the loan.

Though talks with the Government are ongoing, the chance of securing a bailout seemed slim after Chancellor Rishi Sunak wrote to airlines and airports in March saying the taxpayer would only step in ‘as a last resort’.

A rescue package for the airline would have been politically toxic given its super-wealthy backer has not paid personal tax in the UK for 14 years after moving to the British Virgin Islands – a well-know tax haven.

Other potential investors include private equity firms Greybull Capital, which came under scrutiny for overseeing the collapse of troubled airline Monarch and British Steel, and Apollo Global Management.

Critics had called for Sir Richard, who is estimated to be worth around £4billion, to put in some of his own money.

His Virgin Group empire owns stakes in a slew of companies, from Virgin Wines and Virgin Money to social media giants such as Twitter and Pinterest.

The announcement on Monday that it would offload part of its stake in Virgin Galactic indicated Sir Richard had succumbed to the pressure.

But it will mean that the entrepreneur loses his controlling stake in the space exploration company, with his ownership falling below 43 per cent.

He will also have to relinquish one of Virgin Group’s three seats on the eight-strong board.

Virgin Galactic was founded by Sir Richard  in 2004 and had initially hoped to launch tourist flights into space by 2009.

But the mission has been beset by a series of delays, not least the death of co-pilot Michael Alsbury during a disastrous test flight of the VSS Enterprise craft in 2014. 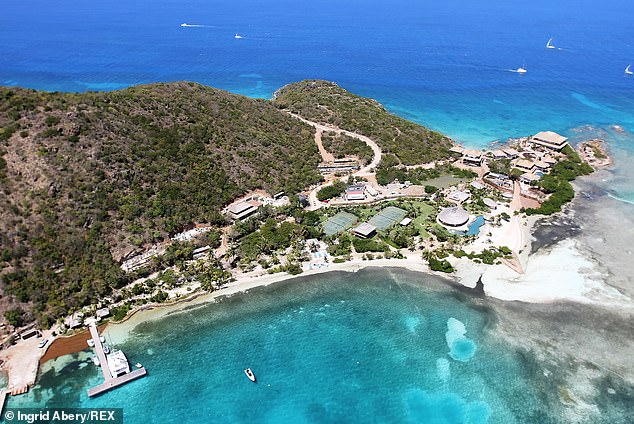 Sir Richard owns 115million shares in Virgin Galactic, or 55 per cent, worth around £1.9billion before he announced his intention to sell.

Virgin Atlantic, which is 49 per cent owned by America’s Delta Air Lines, has lined up insolvency experts Alvarez & Marsal in case rescue talks fall through.

The airline believes it needs £750million of funding, which could be met with a mixture of private investment and cash raised by Virgin Group.

Sir Richard Branson has a lavish set of properties where he can spend him time around the world – when not in lockdown. Here is what he owns:

1. Mahali Mzuri – a safari camp in the Kenyan Bush 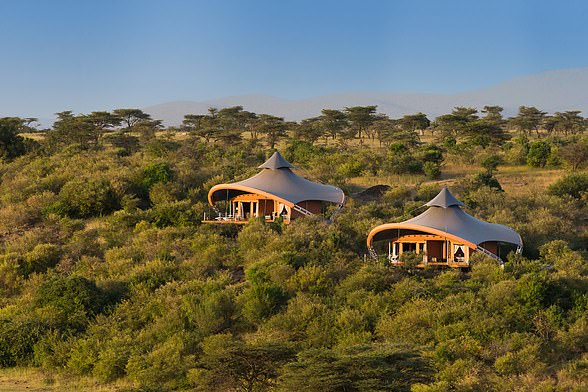 Tents in the Mahali Mzuri – a safari camp in the Kenyan Bush, where you can stay for £1200 a night per person

In 2013 Sir Richard commissioned locals to build a 12-tent luxury safari resort complete with infinity pools and a spa in the middle of the Kenyan Bush.

Guests can stay in one of the tents at the resort for £1,200 a night per person during high season, and may catch sight of elephants, zebra, lions, leopards, cheetahs and giraffes during their stay. Armed guards protects the tents from predators.

Sir Richard states his fondness for safari on the resort’s website, saying: ‘When you think of going on safari in Kenya, one of the first things that comes to mind is the Great Migration.

‘Words just can’t do justice to the majesty of this awe-inspiring spectacle. I hope you enjoy your Kenyan adventure as much as I always do.’ 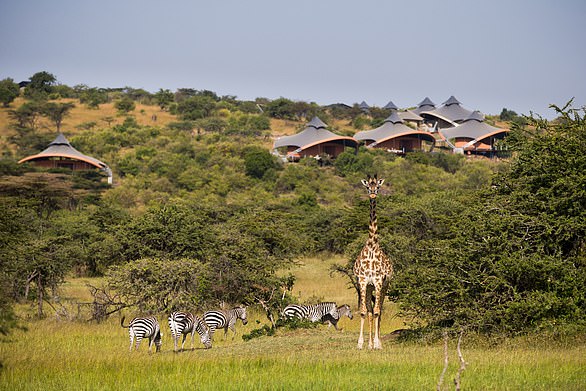 In one of London’s most costly areas for real estate, the billionaire bagged himself a Grade II-listed English Heritage roof top garden that spans 1.5 acres, and is not visible from the shopping high street below.

The gardens boast a members club and restaurant and were bought by Sir Branson in 1981, after he was refused entry to the club twice, reports Bisnow. 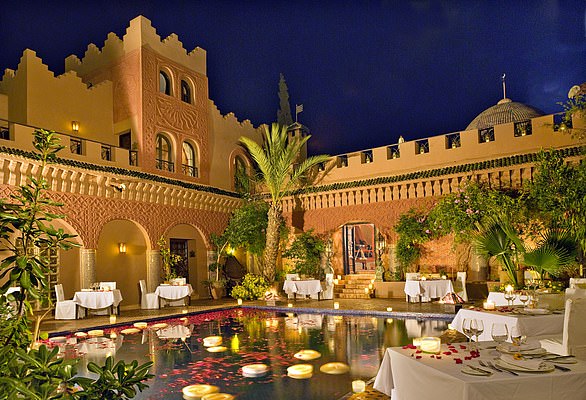 Sir Richard bought the hotel to add to his Virgin Limited Editions in 2005 after his parents enjoyed a stay at the 28-bedroom retreat, overlooking Mount Toubkal in the Atlas mountains.

He states on the website: ‘Welcome to Kasbah Tamadot! This magical place is perfect for rest and relaxation. Enjoy the fresh mountain air as you wander around our beautiful gardens, or go on a trek through the High Atlas Mountains… I hope you enjoy your stay.’ 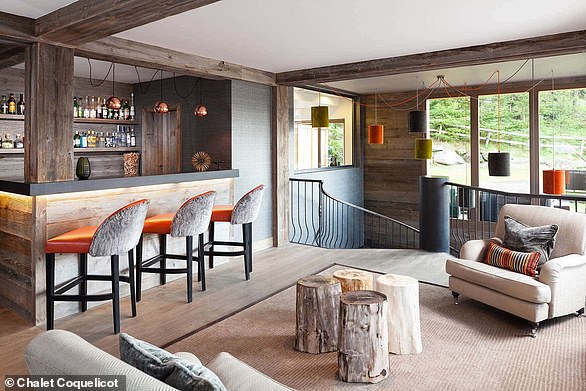 Mr Branson writes on its website: ‘Welcome to The Lodge! From the moment I saw it I knew this beautiful chalet in the Swiss Alps was destined to become my favourite’

In an area often frequented by high-profile friends such as Leonardo di Caprio and David and Victoria Beckham during ski season, the nine-bed ski chalet sits next to Prince Andrew and his ex-wife Sarah Ferguson’s skiing pad, reports Bisnow.

Mr Branson writes on its website: ‘I chose Verbier because it’s an amazing year round destination and offers world-class skiing, fabulous après-ski and everything you could wish for in a summer escape.

‘Para-gliding, rock climbing, mountain biking… you name it! I hope you too will enjoy your experience at The Lodge as much as I always do.’ 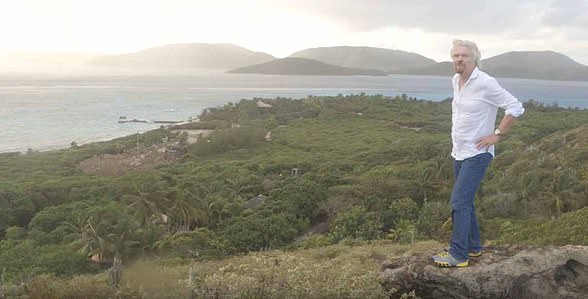 Mr Branson himself lives on Necker, the British Virgin island he bought aged 28

Would you like to rent a Caribbean island for the day? Sir Richard has made that possible for £34,000 a night.

Mr Branson himself lives on Necker, the island he bought aged 28, because he ‘loves the British Virgin Islands’ and said his companies ‘all pay tax in the countries they operate in’.