By Calum Muirhead and Luke Barr For The Daily Mail

The first space mission to launch from Britain could be just weeks away after Sir Richard Branson’s business was given the green light for lift-off.

The Civil Aviation Authority (CAA) granted crucial licences to Virgin Orbit in what was hailed as a ‘major milestone’ for the UK space industry.

Countdown: Virgin Orbit’s mission – named Start Me Up after The Rolling Stones’s song – will see a jumbo jet take off from Cornwall with a space rocket tucked under its wing

The mission – named Start Me Up after The Rolling Stones’s 1981 single – will see a modified jumbo jet take off from Cornwall with a space rocket tucked under its wing.

The first flight is expected next month though no formal date has been set.

Transport Secretary Mark Harper, who signed off the licences, said: ‘Today we are one step closer to opening the UK’s galactic gateway.

‘The planned launch reinforces our position as a leading space nation as we look to the future of space flight, which can spur growth and innovation across the sector, as well as creating thousands of jobs and apprenticeships.’

The CAA said Virgin Orbit, which sends small satellites into space, has taken steps to ‘ensure safety risks arising from launch activities are as low as reasonably practicable’.

The approvals mean Virgin Orbit will be able to launch payloads from Spaceport Cornwall at Newquay airport.

‘This is another major milestone in enabling the very first orbital space launch from UK shores and these licences will assist Virgin Orbit with their final preparations for launch,’ said Tim Johnson, the CAA’s director for space regulation.

The woman building a rival to Cape Canaveral… in Cornwall 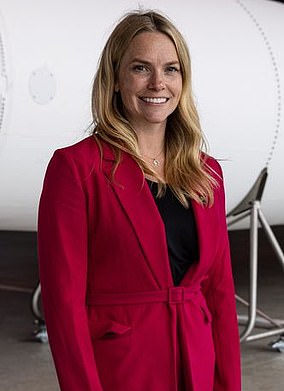 At the forefront of Newquay’s dream to join the space race is Melissa Thorpe.

The Canadian head of Spaceport Cornwall has guided the hub to the cusp of launch, and she will soon be welcoming Virgin Orbit founder Sir Richard Branson to watch the historic take off.

It is a long way from what disbelieving locals once regarded as a pipe dream.

‘When it was first announced, people laughed, because you can’t imagine a spaceport in Cornwall,’ she told the Mail on Sunday this year.

‘But that announcement was eight years ago. Now it’s feeling very real.’

Thorpe (left) was thrilled to hear Virgin Orbit has been granted its launch license and is hopeful the US company’s debut mission on UK soil will establish Cornwall as Britain’s equivalent of Cape Canaveral.

Already she has been ‘inundated’ with inquiries from global businesses, all keen to benefit from her firm’s ‘red carpet service to space’.

Thorpe said: ‘It has been an incredible effort by all partners to reach this milestone, and my team cannot wait to share in the excitement.’

Her plan is to launch two to three times a year in the next five years, potentially creating up to 180 local jobs.

The regulator also noted the approval process for the licence, which took 15 months, placed the UK on a ‘competitive footing’ in the international space sector.

Based in California, Virgin Orbit was founded by Branson and is controlled by his conglomerate Virgin Group.

The firm’s Cosmic Girl aircraft, a modified Boeing 747 jumbo jet, is used to launch its rockets from the air and has been parked at Newquay airport since October.

Unlike traditional lift-off from a launch pad, Cosmic Girl will take off from the runway with the LauncherOne rocket containing nine satellites tucked under its wing. 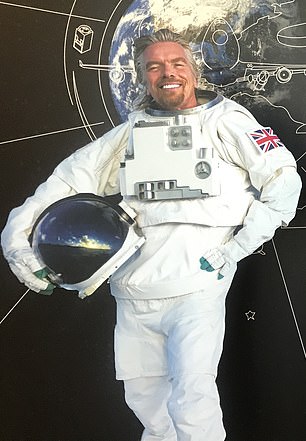 Cosmic Girl will fly the rocket about 35,000 feet into the air over the Atlantic before dropping it into freefall, after which LauncherOne will fire its booster engines to make the rest of the trip into space.

The satellites, which will be the first launched into space from Europe, will then be used for a variety of civil and military uses.

The historic UK space launch was originally planned for early December, but Virgin Orbit was forced to delay take-off due to technical and regulatory issues.

The rocket launch is aiming to be the first in a long line of UK space missions as Britain aims to create a network of hubs across the country and cash in on booming demand for satellite launches.

The British space industry is estimated to be worth £16.5billion and supports 47,000 jobs as well as 2,500 apprenticeships.

Ian Annett, deputy chief executive at the UK Space Agency, said: ‘Establishing orbital launch capabilities in the UK is already bringing investment and jobs into Cornwall and other communities across the UK, and inspiring a new generation to join our growing space sector.’