What was it, six months ago, that prompted me to consult a surgeon about my knees? Was it the fact that whenever I got on the Tube, staring desperately around as I scanned for somewhere to sit, whole carriages rose to their feet to offer me a seat because I looked so wobbly?

Was it that, on one occasion at least, I became so trapped in a low chair, unable to rise because of the pain, that friends had to lift me up? Was it when I had to put in a second rail on my stairs so that I could haul myself to bed? Or was it when I started to look for Underground stations with ‘step-free access’?

A combination of all these, getting worse over the months, brought me to the consulting rooms of orthopaedic surgeon Jonathon Lavelle.

The X-rays revealed arthritis had wreaked havoc on the joint, while the cartilage was almost non-existent behind the kneecap — in both knees. After staring at the scans, Mr Lavelle recommended partial knee replacements of both knees in the same operation.

People like me, who need partial, as opposed to full, knee replacements, typically find walking on the flat comfortable, but going upstairs or up slopes and rising from chairs is painful because it’s the underside of the kneecap that’s affected, and this comes under more strain when your knee is bent.

Partial replacement involves shaving off the arthritic underside of the kneecap and lining it with plastic. Next, the surgeon shaves off the front of the end of the thigh bone and attaches a metal implant to it to replace the part that’s worn away, allowing the kneecap to move smoothly.

As long as you’re reasonably healthy (amazingly, at 74, I was), it is apparently quite routine to have both knees partially replaced at the same time.

Research published this week by the University of Oxford found partial knee replacement can result in a better range of movement than a full replacement (researchers said around half of people with damaged knees could benefit from partial replacement; only one in ten has the operation). 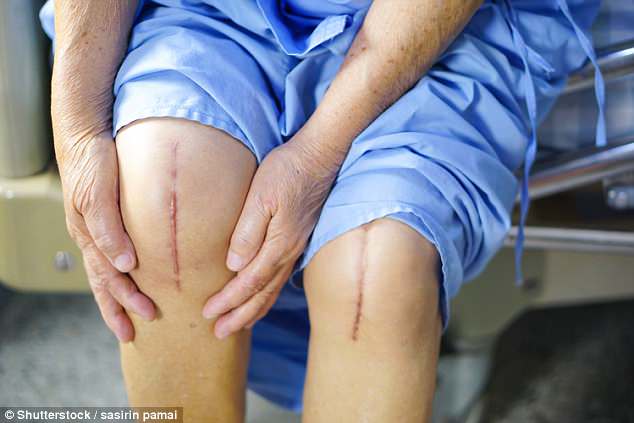 People who need partial, as opposed to full, knee replacements, typically find walking on the flat comfortable, but going upstairs or up slopes and rising from chairs is painful because it’s the underside of the kneecap that’s affected

Around half the partial knee replacement procedures Mr Lavelle performs privately are done at the same time and he says it’s quite common on the NHS.

The double surgery is less common with full knee replacements ‘because they’re bigger operations and involve replacing the whole knee’, he says.

Friends asked me how I’d acquired such arthritic knees. It’s not as if I’m a hurdle-jumper or avid tennis player — far from it. One friend who is having a similar operation blames too much tennis for her worn-out knees. In my case it’s an inherited condition — arthritis runs through the female side of my family. 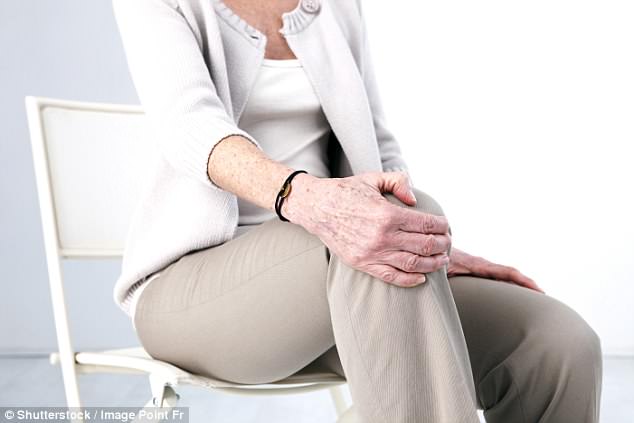 Even once I’d made the decision to have both knees done at once, of course, I had wobbles about the idea. I’d been visiting a physiotherapist for six weeks before the operation (to build up my knee and thigh muscles to support the new joints) and even she was anxious, begging me to let her speak to my surgeon before taking such a drastic step.

I steeled myself and refused. On the advice of Mr Lavelle I’d made up my mind and I was anxious enough without having my resolve being undermined further.

Five ways to prepare a swede

1. Use half swede and half potatoes for a delicious mash that has around 70 calories fewer per portion than a 100 per cent potato mash.

2. Grate raw swede to replace some of the cabbage in your coleslaw — it will count as two of your five a day rather than one (you need different varieties to count as separate portions).

3. Whizz up a swede and carrot soup. Swede is higher in vitamin C than carrots (with similar amounts to Galia melons and blackberries), but carrots have more vitamin A; together they make a great immune-boosting broth.

5. Roast swede tossed in harissa, then serve with a yoghurt dip. An average serving of swede has 1/20th of daily recommended calcium, which is boosted with the yoghurt dip.

My operation was covered by my health insurance, but to pay for a similar double procedure privately would cost around £20,000.

The hospital insisted on an elaborate procedure of bathing myself entirely with an antiseptic scrub before I was admitted: this was to help prevent infection into the wound which can ultimately lead to the replacement failing.

The bacteria that cause urinary tract infections are keen on hopping into joint wounds, apparently, so you have to be tested for them before the operation. If there’s one present, you’re sent home with antibiotics and told to return when you’re better.

Only a few hours after the operation, which lasted around two hours in total, I was encouraged to walk and luckily I was fine, first on a walking frame and the next day, crutches, so I never had to use a bedpan or commode.

You’re not allowed out of hospital until you can manage stairs — and normally people spend between three and four days on the ward before they go home. The staples fastening the 6in scar on both knees, are removed after about two weeks.

Getting your home prepared before you go into hospital is crucial. Luckily, I had a friend, an orthopaedic nurse, who came over and made recommendations. A non-spilling mug for taking coffee upstairs was needed. A loo-seat booster to make getting up and down easier. Grabbers — like litter sticks with which you can pick things up from the floor.

She also recommended a bath board, so you can sit down while having a shower, and temporarily rolling up loose carpets — real tripping hazards. And ice. Your knees will swell into balloons after the operation, and you need to get the swelling down as soon as possible — hence ice packs.

It’s important, too, to have every room equipped with a high-seated chair and sturdy arms so you can heave yourself in and out.

I took to carrying a plastic bag around, stuffed with three flat cushions, and I used them in mini-cabs to make getting in and out easier — you can’t drive for about six weeks after surgery. My friend also advised crutches, or sticks, on every landing and floor.

Naturally, there’s the physiotherapy. I booked myself a package of six sessions to have once a week when I got home, but for the first couple of months you really should do exercises yourself at home at least twice a day.

It’s very important your knees heal in a way that give you as much flexibility as possible. Exercise helps stretch the ligaments and muscles to their maximum.

Researchers at the Brigham and Women’s Hospital in Boston, U.S., have developed a form of surgical glue based on slug slime.

They found it bonds to skin, cartilage and arteries, and suggested it could replace stitches.

In Southern Italy, swallowing slugs is a folk remedy for gastritis, inflammation of the stomach lining that can cause pain, nausea and vomiting. Italians also swallow slugs in a bid to cure stomach ulcers, Dr Cassandra Quave, a medical botanist at Florida International University, reported in the Journal of Ethnobiology and Ethnomedicine in 2008.

Meanwhile, chemists at Sophia University in Tokyo found that slug slime contains peptides — small proteins — that may act as natural antibiotics. Their research, published in 1985, found that the mucus peptides can kill bacteria including E. coli.

The main thing to expect after a double partial knee replacement — apart from the pain — is exhaustion. If you’re no longer young, a double knee operation can knock the stuffing out of you.

But even though, nearly three months after my surgery, I’m not dancing yet, and running is probably always going to be a thing of the past (though by no means impossible — my tennis-playing friend will almost certainly be back on the court), it’s pleasure enough for me to be able to go upstairs without screaming and sink into a sofa without fearing I may never rise to my feet again.

I had the operation at the right time. I wasn’t completely disabled and the younger you are when you have a partial knee replacement, the quicker recovery can be.

‘Quite a few people struggle on until the last minute because they feel threatened by a big operation,’ says Mr Lavelle. ‘When they finally have it done, they nearly always wish they’d done it earlier.’

Each day my pain gets less and I can do more things — last week I drove round the block. Friends are amazed at my recovery and even though I’m not totally healed, they claim I’m far better than I was before I had the operation.

I look forward to the day soon when, rather than strangers offering me a seat on the Tube, I’m the one rising to my feet and offering an old lady a seat myself.