A former bus driver from Virginia who lived with his parents has been sentenced to 20 years in prison for joining ISIS, the Justice department announced Friday.

Mohamad Jamal Khweis from Alexandria was charged with providing material support for the jihadist group and convicted by a federal grand jury in June.

Prosecutors said that Khweis left the United States in 2015 and embedded himself with ISIS militants in Syria for nearly three months.

The 28-year-old managed to get to the war ravaged nation via Turkey, Justice Department officials said.

Khweis was later captured by Kurdish Peshmerga fighters near Tal Afar, Iraq in March of last year and eventually turned over to US authorities, according to Fox News.

‘The evidence at trial demonstrated that Mohamad Khweis is an unpredictable and dangerous person who was radicalized towards violent jihad,’ U.S. Attorney for the Eastern District of Virginia Dana J. Boente said in a statement. 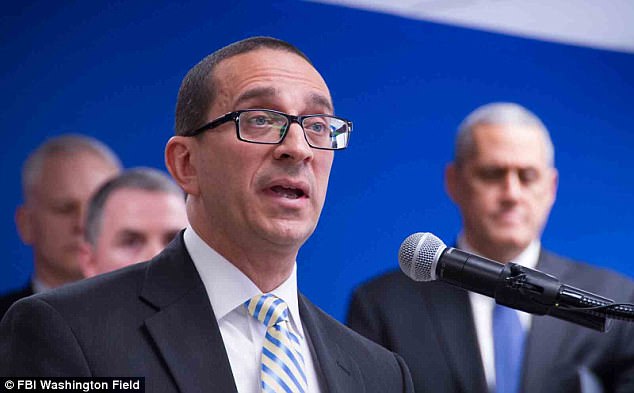 The Justice Department said that Khweis communicated with ISIS members through encrypted mobile applications and agreed to become a suicide bomber for the group.

‘Khweis purposefully traveled overseas with the intent to join ISIS in support of the terrorist group’s efforts to conduct operations and execute attacks to further their radical ideology,’ said Andrew Vale, the assistant director in charge at the FBI’s Washington field office.

‘Khweis recognized that ISIS uses violence in its expansion of its caliphate and he committed to serving as a suicide bomber.’

Once arriving in Syria, Khweis was taken to the organization’s defacto capital of Raqqa, where he was made to fill out a questionnaire that asked for his ‘name, age, skills, specialty before jihad, and status as a fighter.’

Upon his capture, Khweis expressed regret for joining the violent terrorist group, telling a Kurdish television station that he ‘made a bad decision’ and ‘didn’t agree with their ideology.’

‘Daesh [the Arabic acronym for ISIS] does not represent a religion,’ he said at the time. ‘I don’t see them as good Muslims.’ 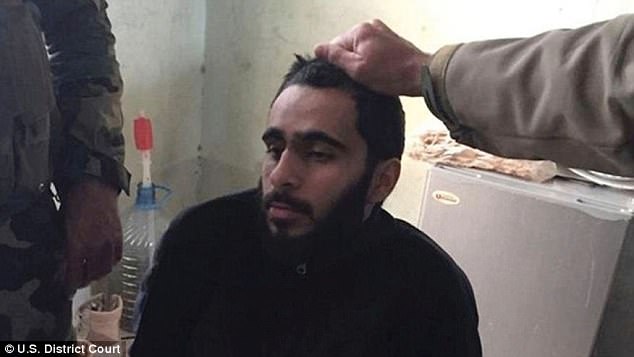 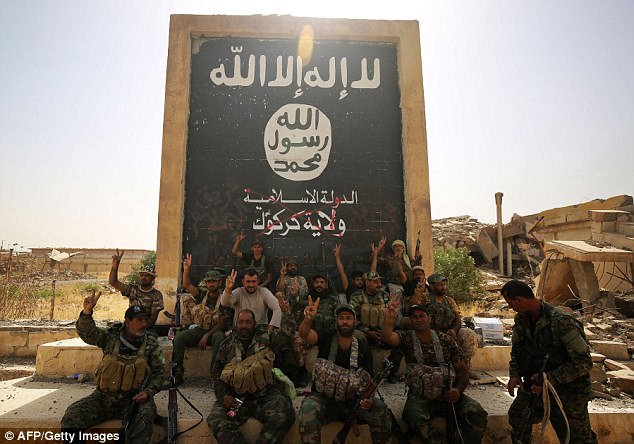 Fighters from the Hashed al-Shaabi (Popular Mobilization units), backing the Iraqi forces, pose in front of a mural depicting the emblem of the Islamic State (IS) group on  October 5, 2017

‘Our daily life was basically prayer, eating, and learning about the religion for about eight hours.’

Kweis graduated from Thomas Edison High School in Alexandria in 2007, where friends described him as well-liked and popular.

‘He wasn’t someone who was an outcast or something like that — he was one of the guys,’ Harrison Weinhold told CBS News in March 2016.

‘There wasn’t anything that would lead me to believe that this was, like, on the radar, that he was just going to go join ISIS.’

Before leaving for the Middle east in 2015, he worked as a bus driver for the elderly and disabled in the region’s Metro system.

His parents emigrated from the Middle East and he grew up as a Muslim, but was not particularly religious. His parents, who attended Friday’s hearing, declined to comment.

Khweis is among only a handful of Americans to join ISIS over the past several years, with security experts placing the number around 250 people.