Walmart was the latest in a string of major grocery store chains forced to reduce its hours on Saturday amid the coronavirus pandemic as panic shopping continues and cases in the United States near 3,000.

The biggest chain store in America revealed it would cut hours from Sunday to allow for further cleaning and restocking as employees at several large grocery store chains voiced their anger as the lack of social distancing in the overly crowded stores.

Across the country, desperate scenes have played out as shoppers prepare to quarantine, whether via a period of self-isolation or possible containment measures imposed by authorities.

Employees have highlighted how being packed into a store goes against advice on social distancing and their health is being put as risk by the mobs of customers.

A gaggle of major grocery store chains will begin closing early daily or scaling back from 24-hour service in order to restock and clean stores, as the coronavirus pandemic drives panic buying.

Chains such as Publix, Giant, Harris Teeter and Wegmans are all scaling back hours, while retail titan Walmart decided Saturday to close 24-hour stores at night during the crisis.

The decision to scale back on store hours came as:

On Saturday, Walmart revealed that it reduce the opening hours of its 24 stores overnight, cutting them back to 6am until 11pm. Stores that do not operate on a 24-hour schedule will likely maintain their current hours.

‘This will help ensure associates are able to stock the products our customers are looking for and to perform cleaning and sanitizing,’ Dacona Smith, executive vice president and chief operating officer, Walmart U.S., wrote.

‘As we make this change, associates will continue to work the hours and shifts they are scheduled, and our supply chain and trucking fleet will continue to move products and deliver to stores on their regular schedules.’

‘To our associates, thank you for your incredible work during this time. I know it hasn’t always been easy, but your entire Walmart family is so proud of what you are doing and the important difference you are making, both for your neighbors and for your country,’ Smith added.

Scenes in Walmart across the country on Saturday showed the shocking extents to which customers were going to get supplies.

On tweet revealed that there was at least a four-aisle line waiting to get toilet paper and no information given on how long the wait was expected to be.

Other social media posts saw police officers alongside an employee guarding the toilet paper line in one Walmart.

And toilet papers aisles were completely sold out in other stores but lines continued to grow for other products. 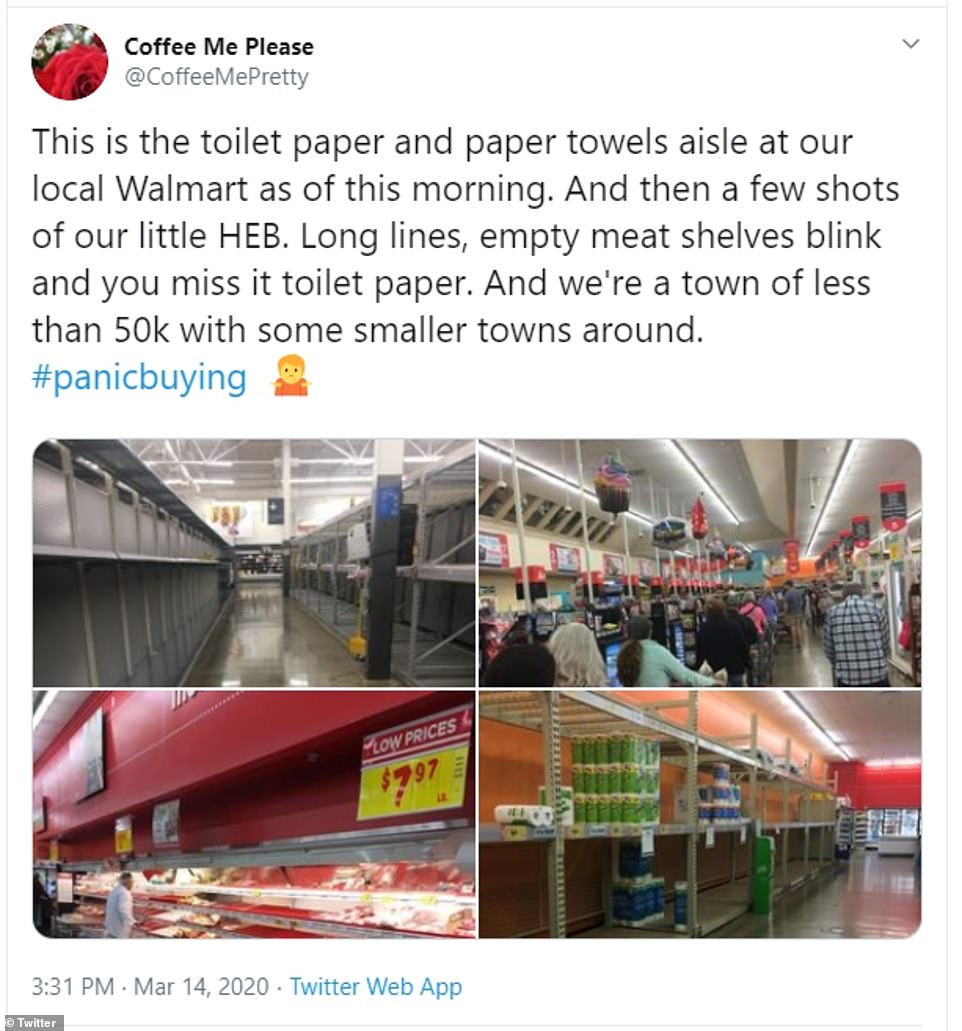 ‘And we’re in a town of less than 50k with some smaller towns around.’

The move on cutting back on opening hours comes as employees from Walmart, Trader Joe’s and other chains begin to voice their concern over the conditions they are working in.

Workers claim they are being forced into crowded stores where there is no hope of social distancing and are putting their own chances of staying safe from the virus at risk.

Fights have also broken out in several stores across the country as tensions flared between anxious customers.

In Fairfield, California, police were called when fights broke out over shopping carts at a Costco, according to KNTV reporter Jodi Hernandez.

At the same store, a fight also erupted when a man took a package of toilet paper out of someone else’s cart, an employee told Hernandez. 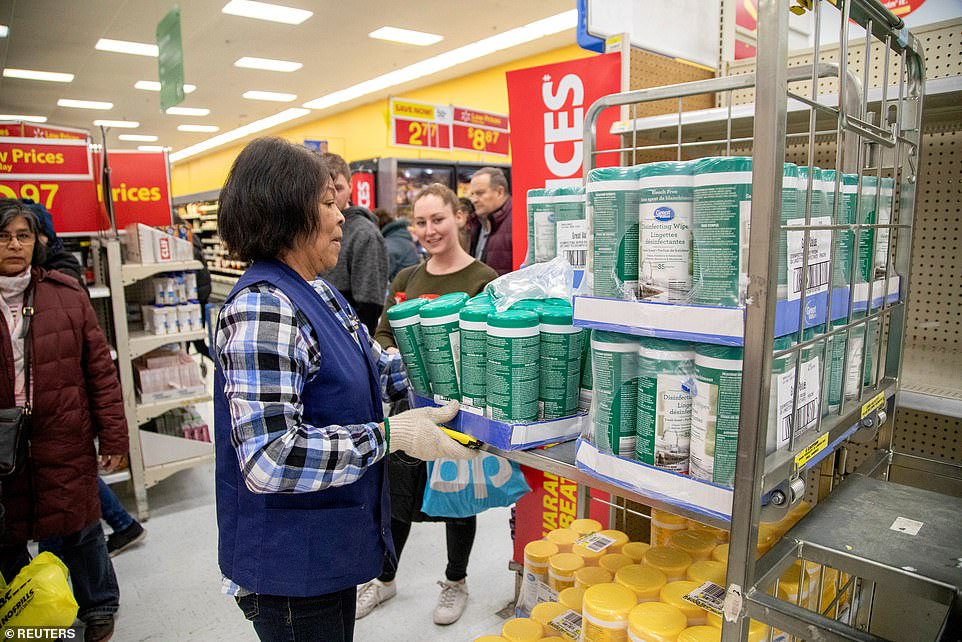 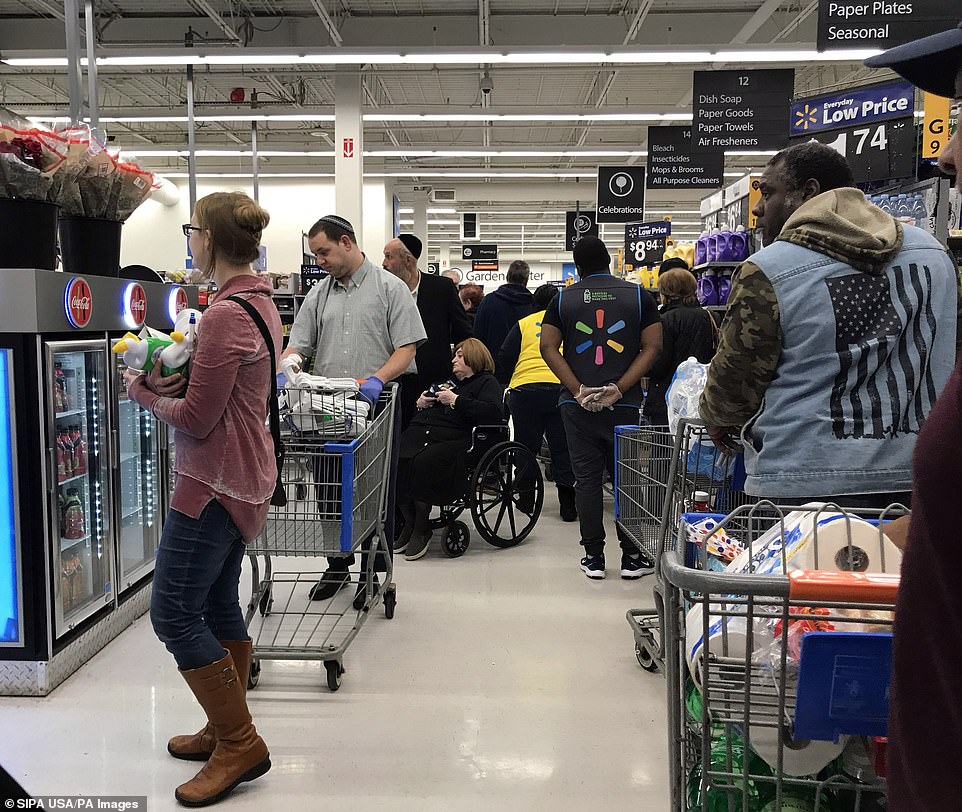 People wait in long lines caused by the coronavirus at Walmart in Suffern, New York, on Friday 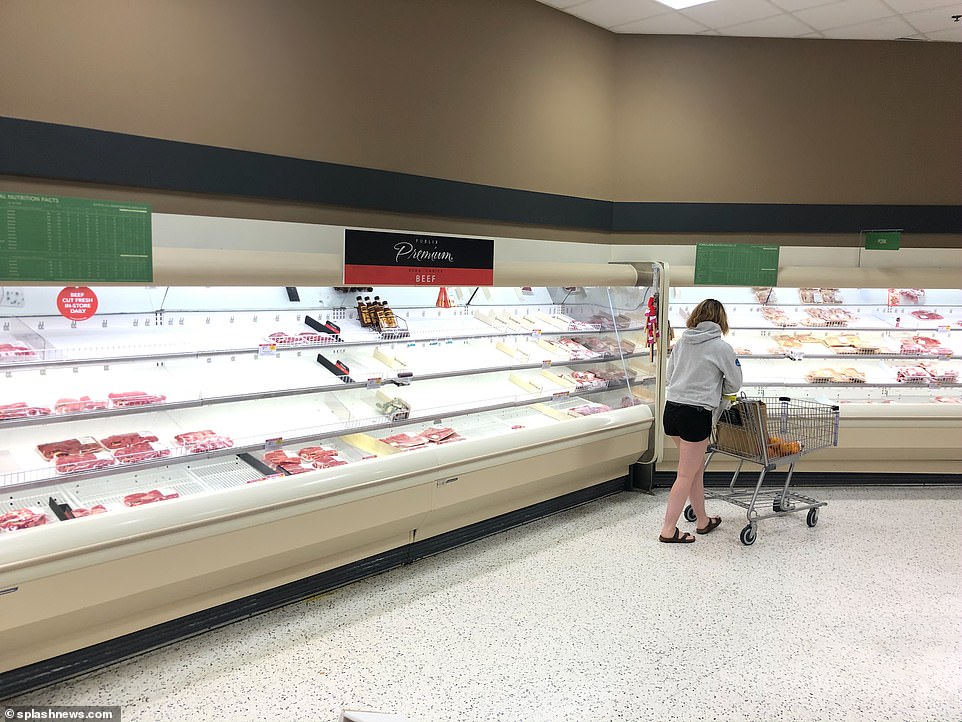 Coronavirus-fearing masked shoppers panic buy in Miami Beach, Florida emptying shelves of toilet paper. Every roll of toilet paper was gone in Publix Superstore in South Beach and there was dwindling supplies of eggs, meat and pasta 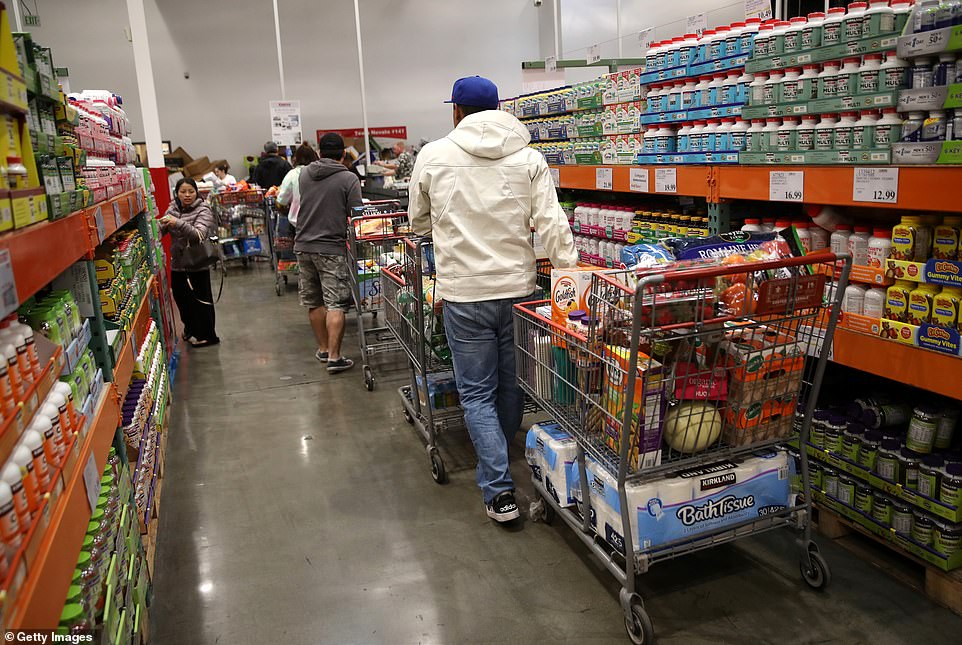 Customers line up to check out at a Costco store on Saturday in Novato, California. Some Americans are stocking up on food, toilet paper, water and other items after the World Health Organization (WHO) declared coronavirus (COVID-19) a pandemic 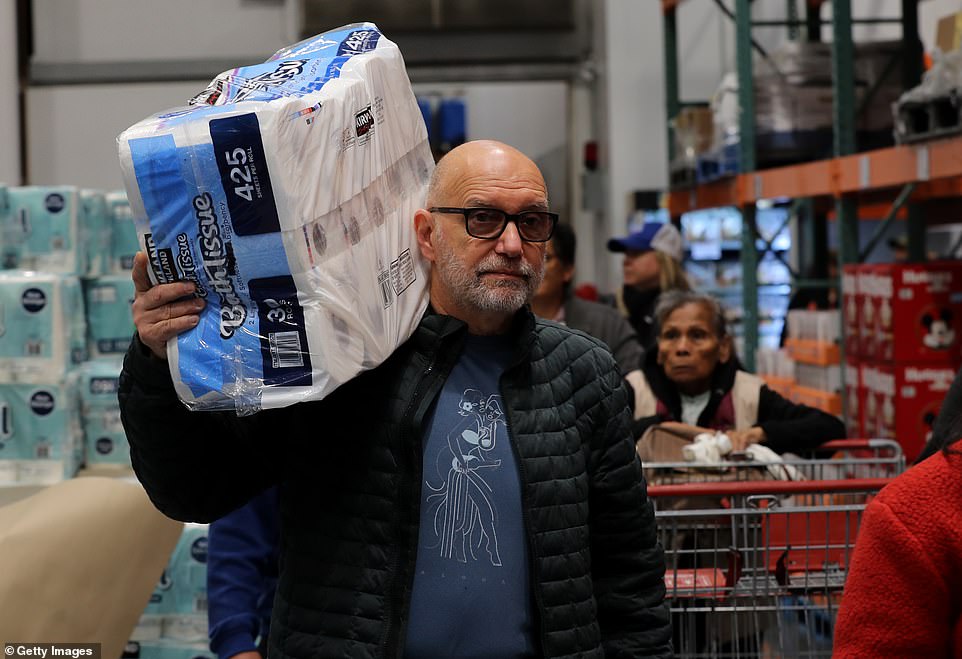 A customer carries a package of toilet paper at a Costco store on Saturday in Novato, California 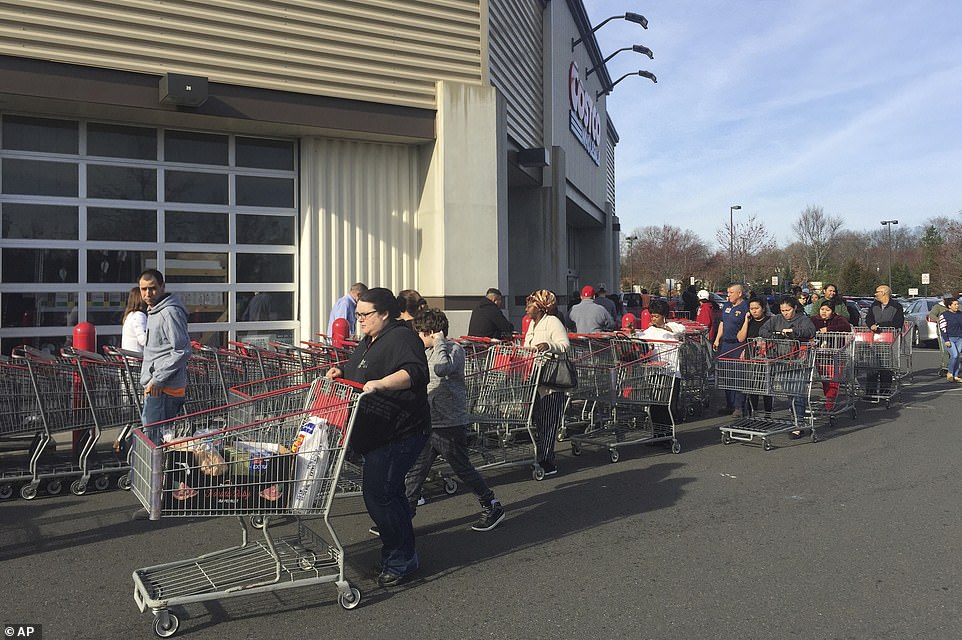 Shoppers line up to enter a Costco warehouse store in Alexandria, Virginia on Saturday. The store was sold out of numerous items including toilet paper, paper towels and sanitizing wipes

Experts say that supply chains are robust, and there is little to no chance of a food shortage in the U.S.

But grocery stores have struggled to keep up with demand, hiring more workers and doubling deliveries as items fly off the shelves in the virus frenzy and fights erupt between anxious customers.

In response, grocery chain Publix, which has more than 1,200 stores in southern states, will begin closing two hours early, at 8pm, every day.

The Florida-based chain said it wants to give employees time to restock produce and sanitize shelves.

‘Publix will continue to focus on keeping our associates healthy — and our stores open and stocked — to serve and support all our communities,’ Todd Jones, Publix CEO, said in a statement on the chain’s website.

The Giant Company, which has nearly 200 stores across the mid-Atlantic, announced Saturday that its 24-hour locations would start closing at midnight and reopening at 6 am ET the following day.

The Pennsylvania-based chain cited the same reasons as Publix in a press release: ‘The decision comes as part of the company’s continued response to the COVID-19 pandemic and will allow store team members additional time to sanitize and restock shelves as daily deliveries arrive.’ 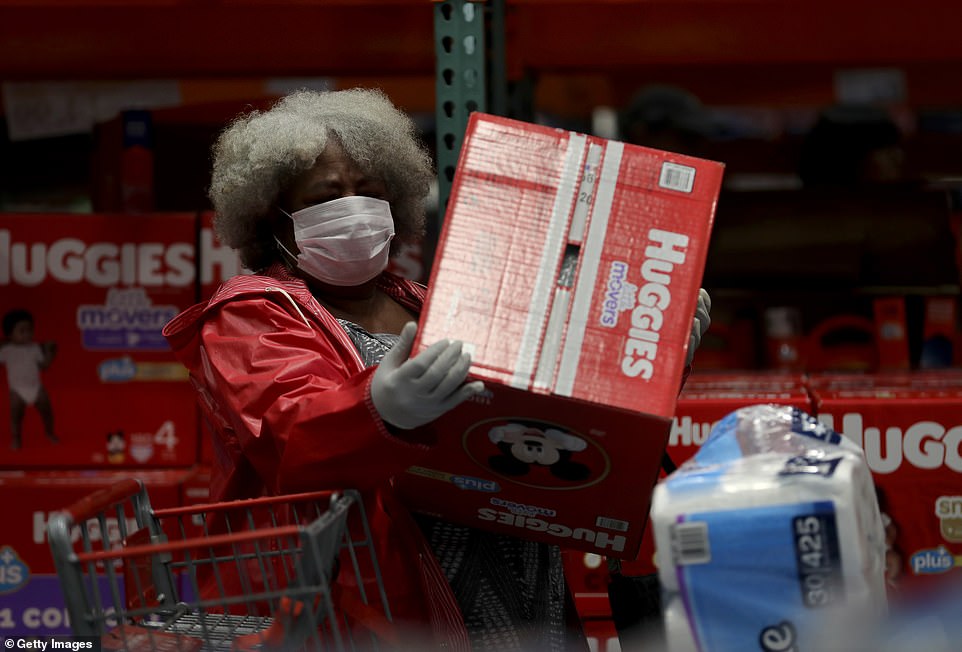 A customer wears a protective mask as she picks up a box of diapers at a Costco store on Saturday in Novato, California 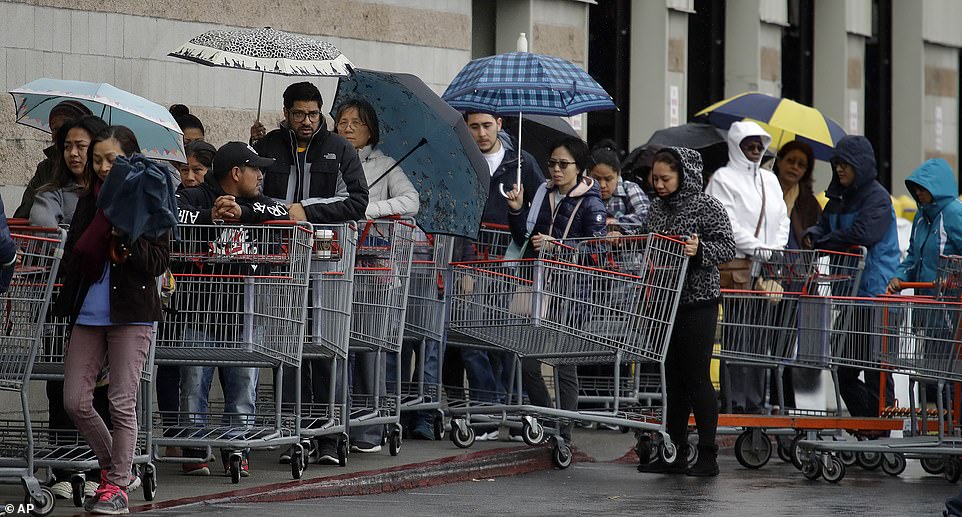 Costco customers wait in the rain to enter the store on Saturday in San Leandro, California 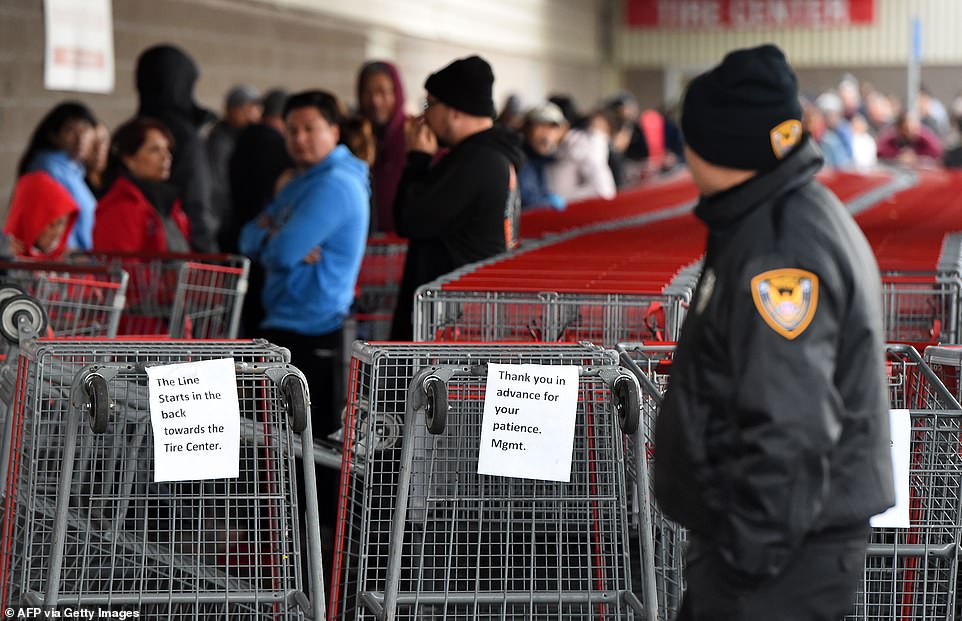 Hoards of shoppers rushed to stock up on toilet paper, paper towels and cleaning supplies at this Costco in Novato, California on Saturday as communities begin hunkering down as a result of coronavirus 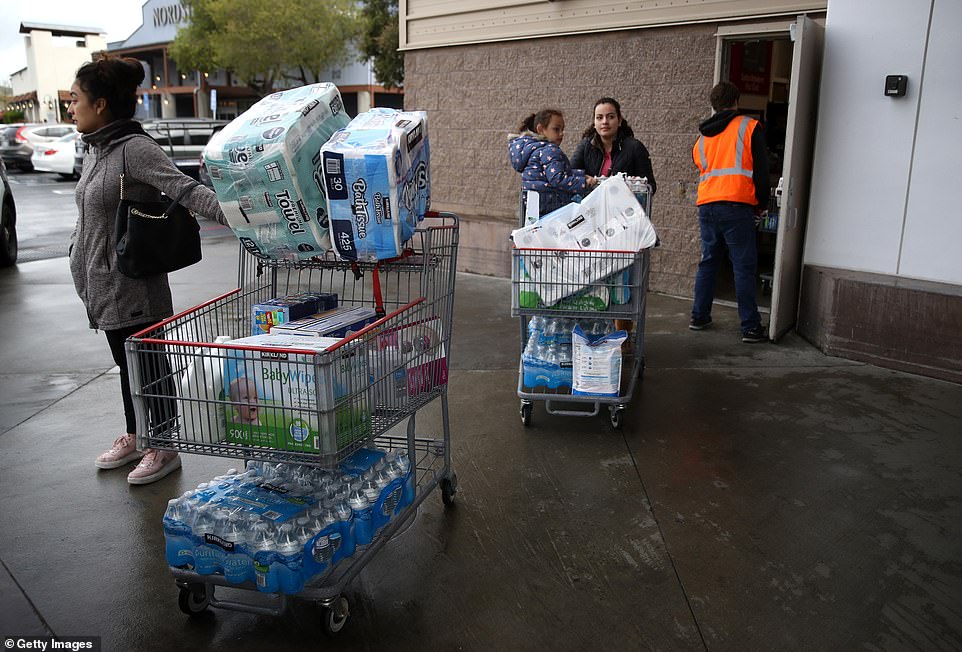 Customers push shopping carts filled with supplies at a Costco store on Saturday in Novato, California

In the Northeast, Wegmans is also ending 24-hour service, to allow the stores to be cleaned and items to be restocked, the supermarket chain announced Friday.

‘We are changing our hours of operation to better serve our customers and communities,’ the New York-base company stated.

Stores in New England, New Jersey, Virginia, Pennsylvania (excluding Erie) and North Carolina will also close at 11pm, while the store in Erie will close at midnight. The Maryland stores will close at 10pm. 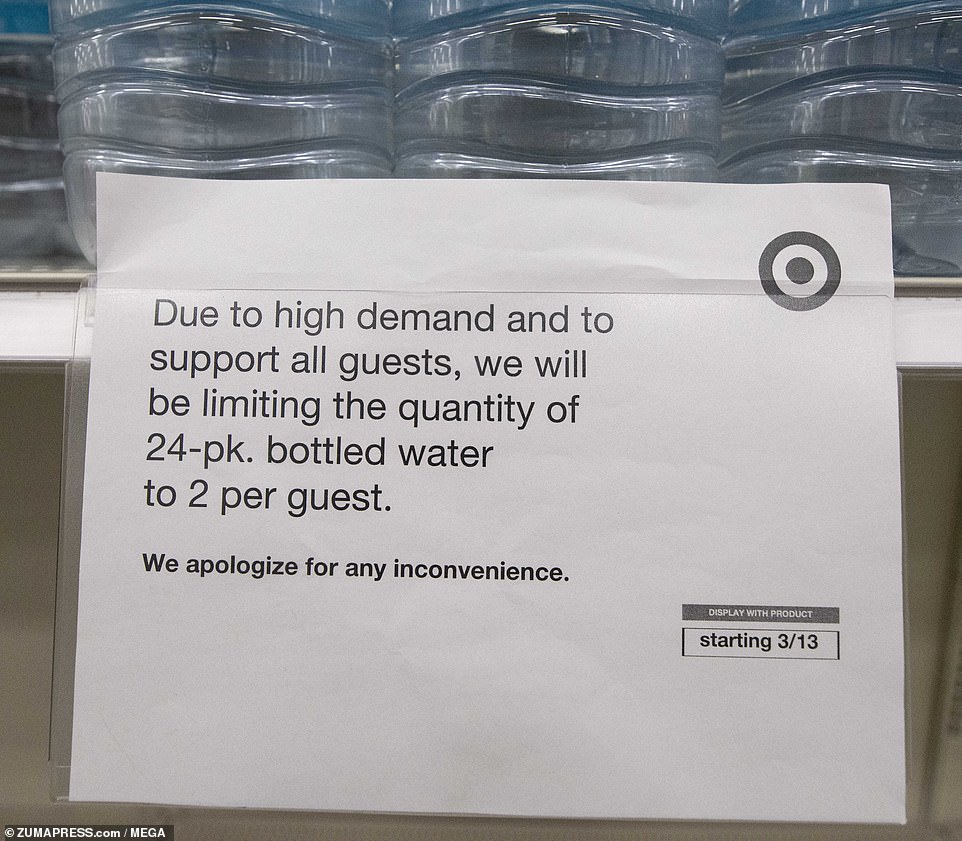 Panic shopping hits Plano, Texas on Saturday as this Target limits the quantity of bottled water per customer 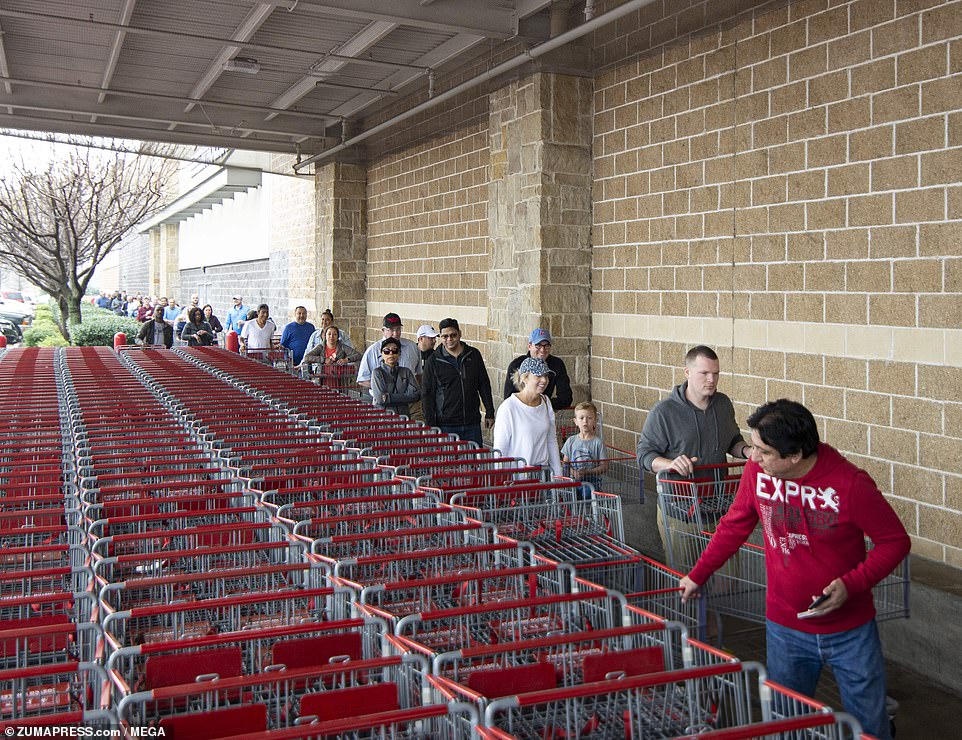 Shoppers lined up at this Target in Plano, Texas on Saturday as the frenzy of panic buying continues 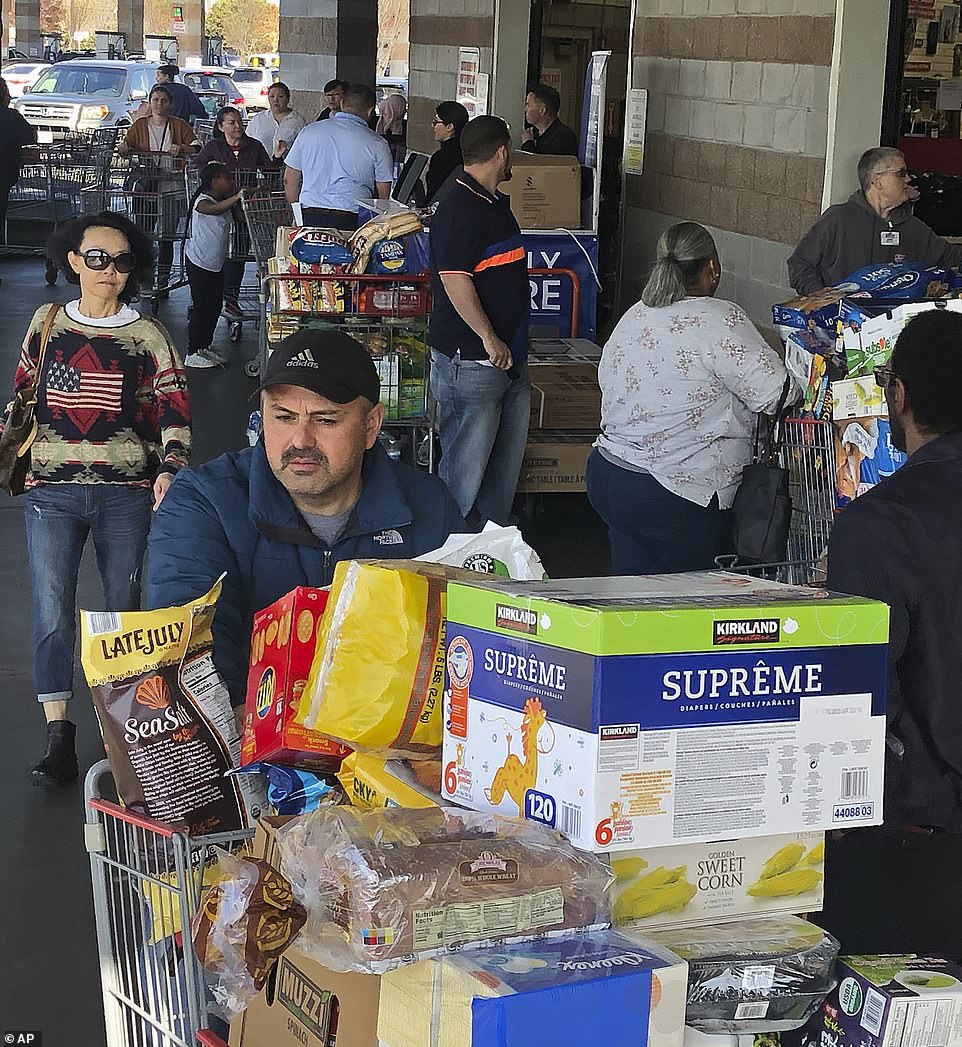 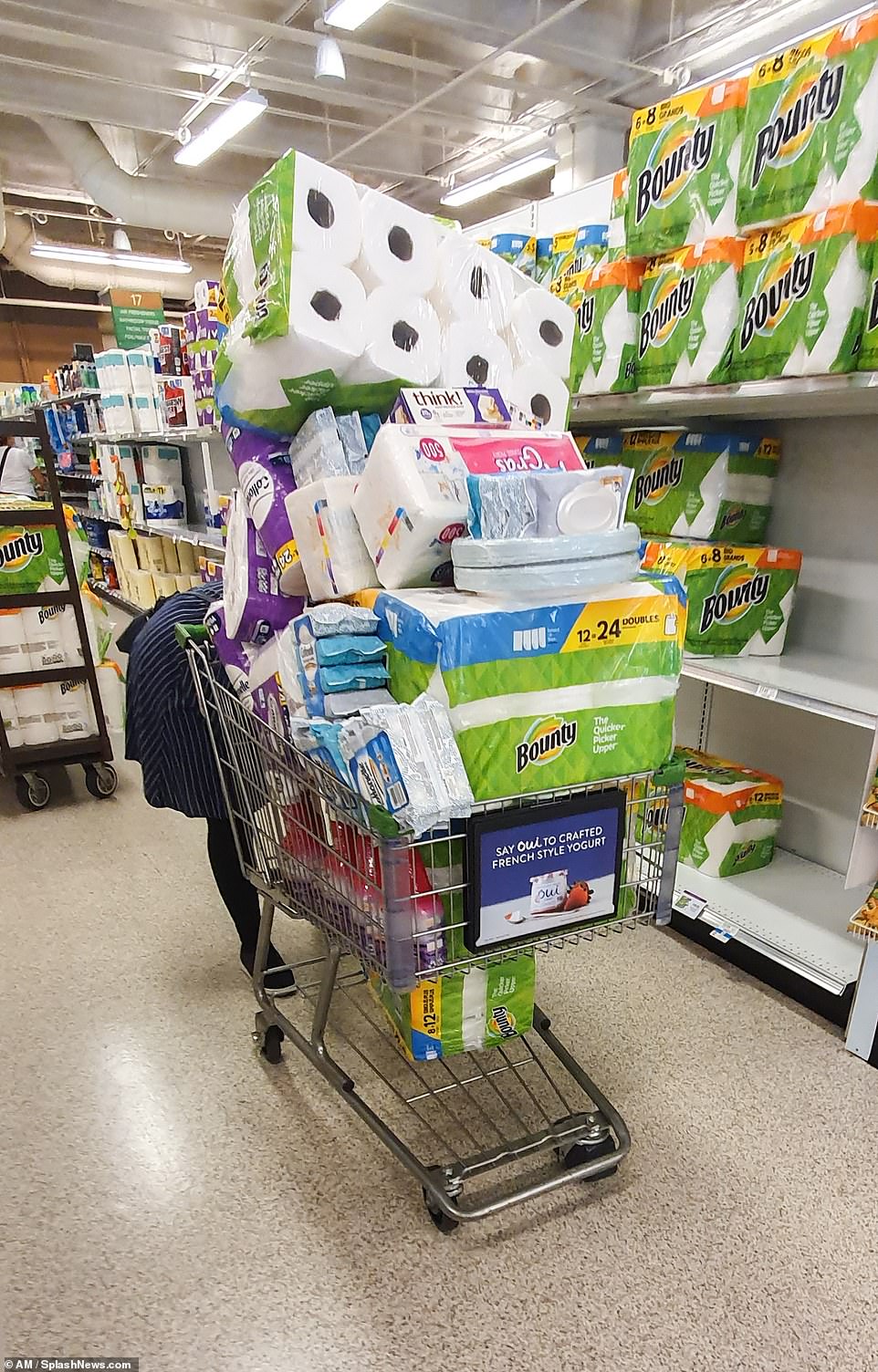 This Publix in Miami Beach has placed signs inside their store saying hand soap and sanitizer items are limited to two of each item per customer. The meat, toilet paper and hand sanitizer sections were almost empty 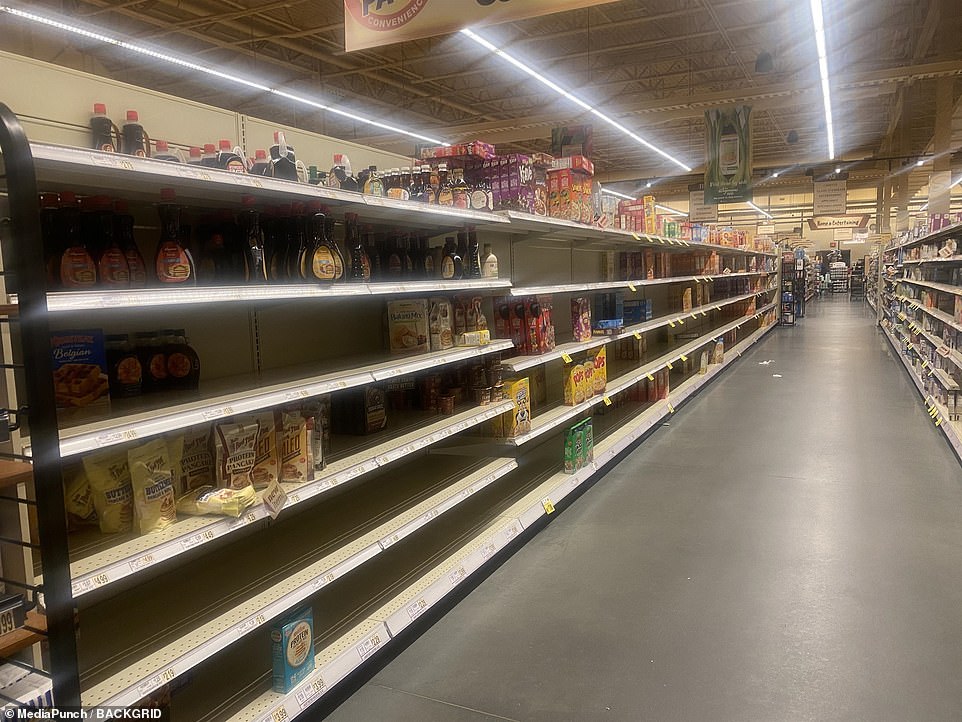 View of empty shelves at Wegmans as patrons purchase supplies due to the COVID-19 pandemic in Alexandria, Virginia

Harris Teeter, a large supermarket chain serving the Southeast, said Saturday that it will close its stores at 9pm each night in order to focus on cleaning and replenishing, and for the health of their employees