Vistry gets a boost from affordable housing work

The FTSE 250-listed group told investors on Wednesday it is on track to meet its adjusted pre-tax profit expectations of around £418million for 2022, up 21 per cent from a year earlier.

Boost: Housebuilder Vistry said its rental sector and and affordable housing work helped give it a boost

‘We are seeing a sustained level of demand across Partnerships from Housing Associations, Local Authorities and the private rented sector, with a strong Q1 pipeline’, the group said.

Vistry said it completed 1,600 ‘affordable’ homes in the last year, up from 1,590 the previous year.

Average selling prices increased by around 6 per cent to £324,000, against £305,000 a year ago, which the group said reflected ‘changes in mix and house price inflation across the year’.

Land acquisitions came in at 5,352 by the end of the year, compared to 7,667 the previous year. The group said: ‘The rate of land acquisition in Housebuilding consciously slowed in the fourth quarter reflecting the increased level of uncertainty in the housing market.’ 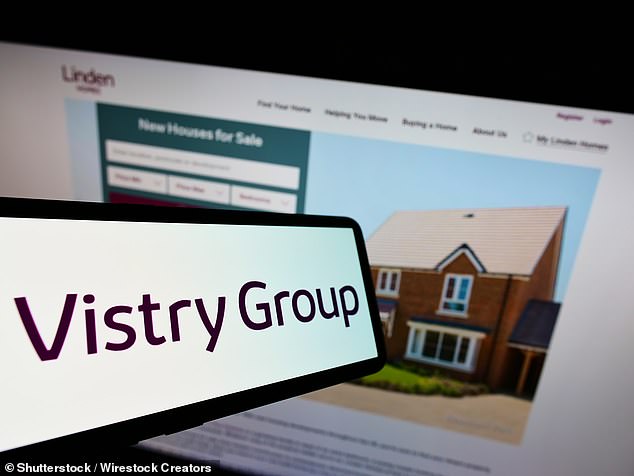 Shares in fellow housebuilder Persimmon rose slightly today, but have slumped by over 40 per cent in the last year.

Greg Fitzgerald, Vistry’s chief executive, said: ‘2022 was another year of excellent progress for Vistry, and despite the more challenging market conditions following the September mini-budget, profits are in-line with expectations and ahead of where we were at the start of the year.

‘We start this year focused on maximising Vistry’s unique capability as a leading housebuilder and partnerships business to increase the delivery of high quality housing across all tenures.

‘The Group’s forward sales position totals an encouraging £4.6billion and we have a strong pipeline of new opportunities within Partnerships.

‘It is too early in the current year to predict the outturn for private sales, however I remain cautiously optimistic that buyer sentiment will improve over the coming months.’

Vistry’s weekly private sales rate per outlet for 2022 fell to 0.71 from 0.76, but dropped to 0.46 in the fourth quarter, reflecting heightened macroeconomic uncertainty and higher mortgage costs.

Analysts at Peel Hunt, said: ‘The outlook for Partnership housing continues to look stronger than the mainstream market due to the large shortage of affordable housing.

‘Vistry’s exposure to this sector is a clear differentiator to the rest of the sector and should allow it to outperform over the medium term.’

Many housebuilders are grappling with a variety of headwinds that could impact sales, including a sharp rise in mortgage costs. Last year political uncertainty also knocked sentiment.

Building materials business Ibstock cautioned on Wednesday that inflation and ongoing market uncertainty would likely weigh on demand this year.

Ibstock’s annual revenues jumped 25 per cent to around £510million, while adjusted underlying earnings were predicted to be ‘modestly ahead’ of internal expectations.

The FTSE 250-listed company said it had delivered a ‘resilient performance’ in the final quarter of the year, driven by a continued focus on price and margin management and good operational execution. It also highlighted that ‘disciplined cost management’ underpinned its solid underlying earnings margin performance.

Ibstock added that while it continues to expect conditions in 2023 to be ‘more challenging than 2022’, it was ‘increasingly well positioned’ to capitalise on market opportunities and remains confident in its ability to deliver against its ‘ambitious’ medium-term financial targets.