Paris Jackson has denounced neo-Nazis and white supremacists in a fiery speech at the MTV Video Music Awards.

The 19-year old daughter of Michael Jackson spoke as she she presented the award for Best Pop Video at the glitzy ceremony in Inglewood, California on Sunday night.

‘Let’s leave here tonight knowing that we must show these Nazi, white-supremacist jerks in Charlottesville and all over the country that as a nation with liberty as our slogan we have zero tolerance for their violence, their hatred and their discrimination,’ Jackson continued, referencing violent clashes in Virginia earlier this month.

‘We must resist,’ she continued, flaunting her trim figure in a see-through dress over a matching Christian Dior bra and tiny shorts combination.

Paris Jackson has denounced neo-Nazis and white supremacists as she she presented the award for Best Pop Video at the glitzy ceremony in Inglewood, California on Sunday night

‘You know, if we were all to put our voices together, do you know the difference we could make? If we were to stand up all united as one, our impact it would be “yuge.” It would be “yuge.” Believe me, “yuge.” And that’s not fake news,’ Jackson said, mocking some of President Donald Trump’s well-known verbal tics.

She went on to name girl group Fifth Harmony as winners in the category.

Jackson is just the latest celebrity to denounce white supremacy following violent clashes between antifa and white nationalists at an August 12 rally in Charlottesville, Virginia that left one woman dead. 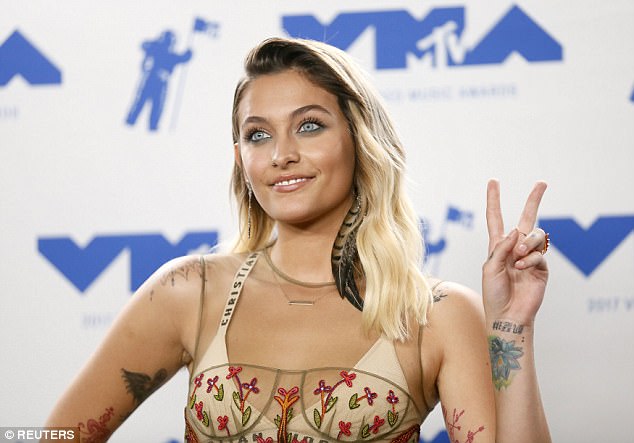