Last year, Taylor Swift graced the cover of Vogue’s September issue. In 2018, it was Beyonce, and in 2017, it was Jennifer Lawrence.

Cover paintings over photography are a rare but not unheard of occurrence in the fashion bible’s 128-year history, and Marshall and Casteel join the ranks of Salvador Dalí, Giorgio de Chirico, Marie Laurencin, and John Currin.

Something different: Vogue’s two September issue covers feature paintings this year. This one, of fashion designer Aurora James, was created by Jordan Casteel 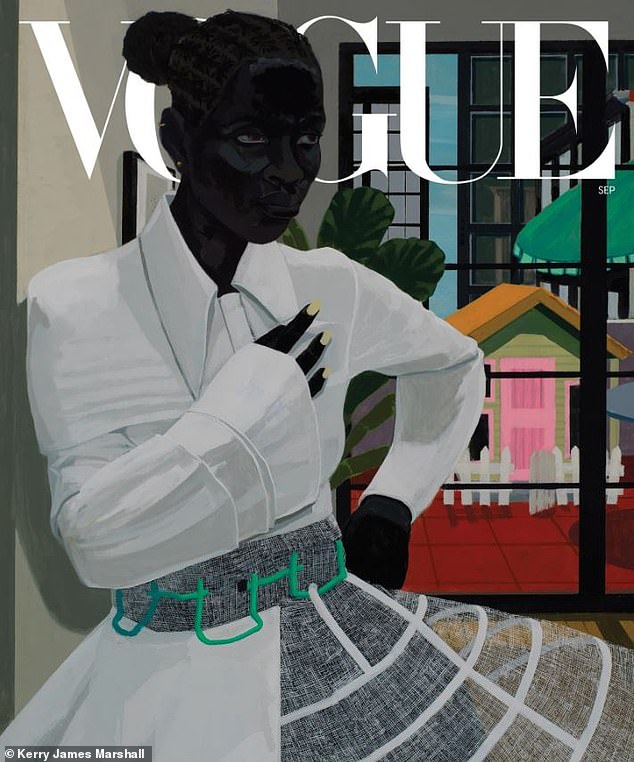 Attention-grabbing: Artist Kerry James Marshall painted a fictional character with skin so dark that it’s ‘at the edge of visibility’

Writer Dodie Kazanjian explains that Vogue’s covers ‘talk to us about who we are and about the world we live in’ — and this year, ‘our world [is] turned upside down, by the plagues of COVID-19 and presidential incompetence.’

So the magazine is taking a break from its go-to mega-famous cover stars, and gave two artists ‘complete freedom to decide who would be on their cover, a real or imaginary person, and how that person would be portrayed’.

Marshall, who had a 2016–17 retrospective at the Metropolitan Museum of Art, created a fictional character for his cover, dressing her in a gown by the label Off-White.

‘I’m trying to build into her expression that she’s not dependent on the gaze of the spectator,’ he said. ‘”I’m here and you can see me, but I’m not here for you.” That’s a critical element. The great word, ultimately, is going to be “self-possessed.” That’s what I’m aiming for.’

He painted his character’s skin so dark that it’s ‘at the edge of visibility,’ using three shades of black: carbon black, iron oxide black, and ivory black.

‘The point is to show that blackness is rich and complex, within the blackness alone,’ he said. ‘If you’re going to be painting a face as black as I’m painting them, they can’t just be a cipher, like a black hole. They have to be mysterious but available.

‘If you say, “Black is beautiful,” you have to show it. And what I’m doing is showing it at the extreme. Yes, it is black — very black — and it is very beautiful.”

Casteel, whose work was on display at New York City’s New Museum before the pandemic, painted fashion designer Aurora James in a dress by Pyer Moss.

The artist said she believes that James’ 15 Percent Pledge, which supports black-owned businesses, is ‘hugely important in creating the long-term change that Black people deserve and this country owes us. 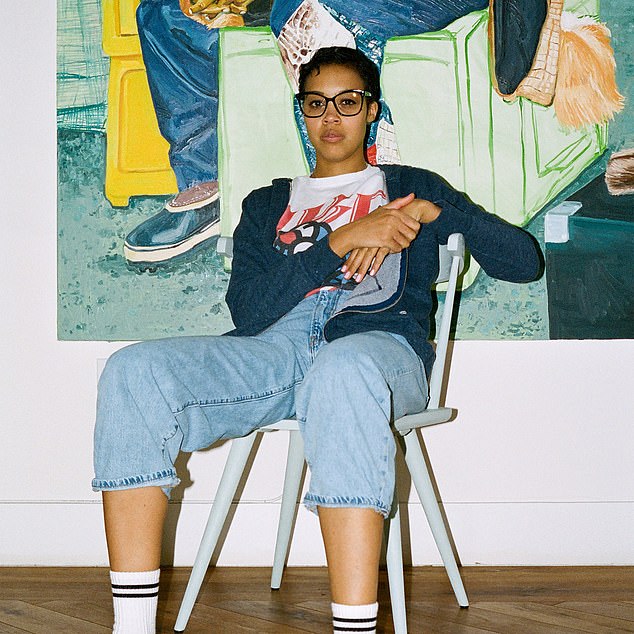 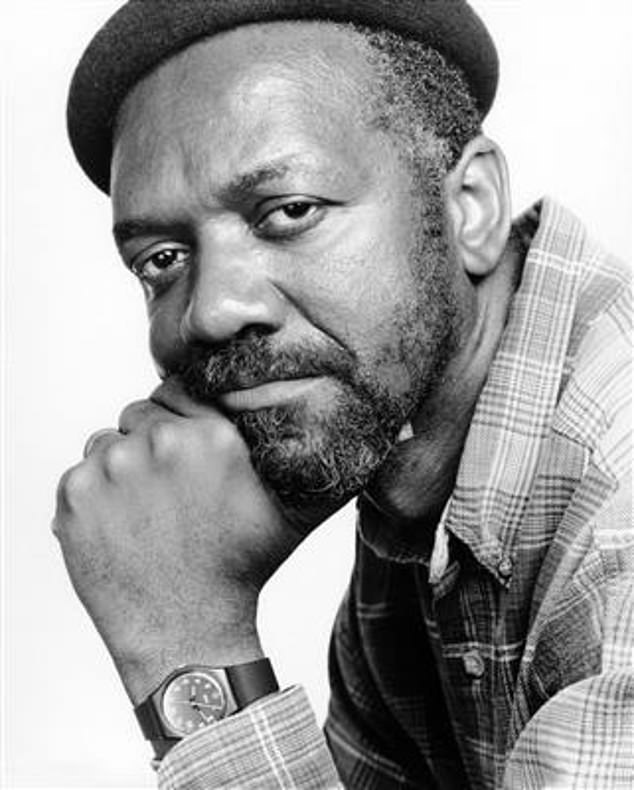 Who we are: Writer Dodie Kazanjian explains that Vogue’s covers ‘talk to us about who we are and about the world we live in’ (pictured: artist Marshall)

‘I see her as a light in a lot of darkness, and a potential for hope, a representative of change across all creative industries,’ she said.

The cover reveal for this year’s September issue, which is widely regarded as the most important and influential annual issue of any fashion magazine, comes amid mounting criticism of American Vogue over its lack of diversity and inclusion.

Earlier this month, Beyonce’s mother Tina Knowles called out the publication for not hiring enough black photographers for its cover shoots – while praising the magazine’s British version for its own September cover, which features 40 activists described as ‘The Faces of Hope’.

British Vogue’s September issue features Marcus Rashford and Adwoa Aboah on the cover and spotlights activism, with editor Edward Enninful calling the issue a ‘rallying cry for the future’.

The issue, which is a collaboration between all 26 editions of the magazine around the world for the September and October issues, also marked the first time in British Vogue’s history that the cover was shot by a black man.

But while Knowles applauded Enninful’s work, she also took the opportunity to call out American Vogue, accusing the magazine of not doing enough to spotlight black talent.

‘Kudos to this wonderful Man Mr. Edward Enningful!! [sic] Editor of “British Vogue“ for boldly putting our beautiful Activists on the cover!!!’ she wrote, captioning a photo of Enninful.

‘When will American Vogue step up and hire more Black Photographers for cover shoots? We’re waiting…….’

In June, Wintour addressed the criticism aimed both at herself and the magazine, admitting that she allowed ‘hurtful and intolerant behavior’ go unchecked during her 32-year reign at the fashion magazine, while also noting that she has not done enough to champion black staffers and designers. 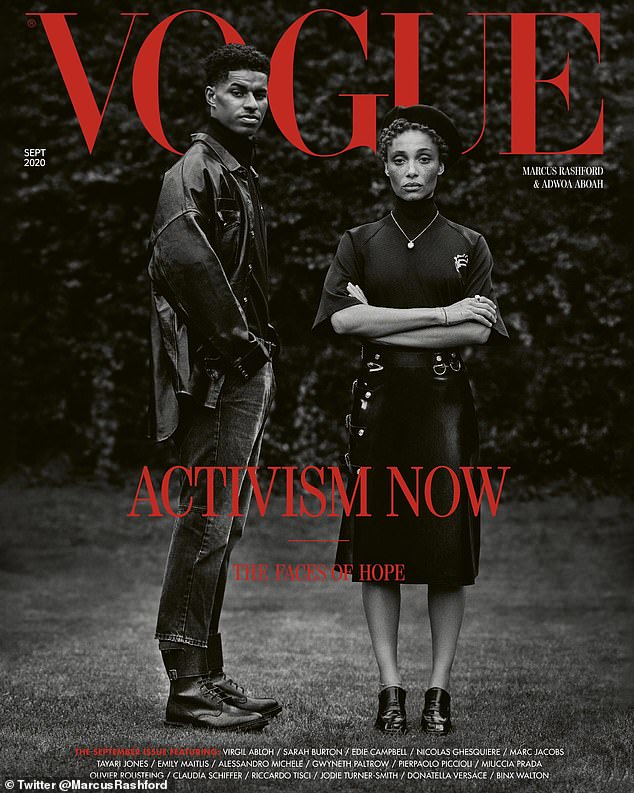 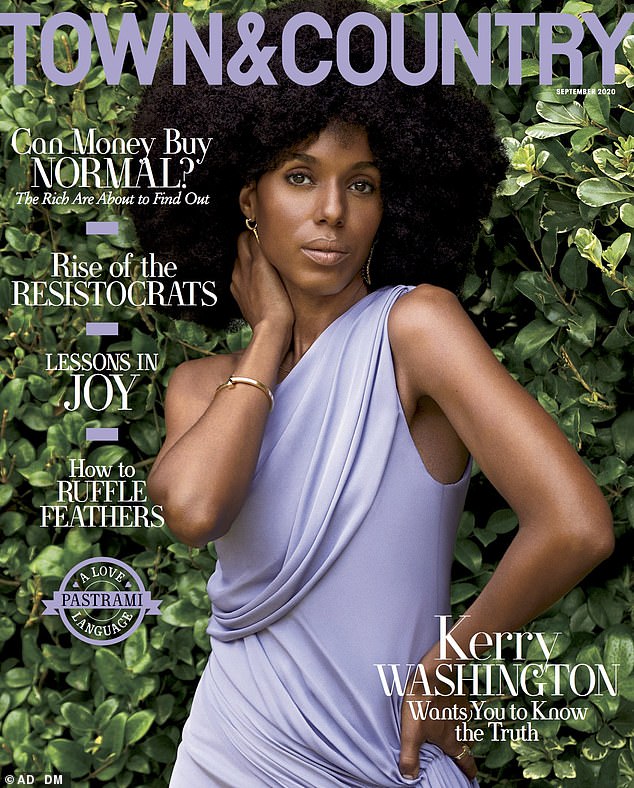 Gorgeous: Kerry Washington covers the September issue of Town & Country and was interviewed alongside several ACLU lawyers who appear in a documentary she made

‘I want to start by acknowledging your feelings and expressing my empathy towards what so many of you are going through: sadness, hurt, and anger too,’ Wintour wrote in a company-wide memo that was sent out to staff amid the Black Lives Matter protests following the death of George Floyd.

‘I want to say this especially to the Black members of our team — I can only imagine what these days have been like. But I also know that the hurt, and violence, and injustice we’re seeing and talking about have been around for a long time. Recognizing it and doing something about it is overdue.’

Vogue’s new covers follow in the footsteps of several other major magazines, which have also used their September issues to spotlight activism, social justice, and black stars and photographers.

But while the images are the standard glamorous shots one would expect in a glossy monthly magazine, Kerry, 43, isn’t talking movies or fashion in the accompanying interview.

She was interviewed by Sarah Elizabeth Lewis, an Associate Professor at Harvard University, and was joined by five American Civil Liberties Union lawyers.

The group discussed the new documentary, The Fight, which is about the ACLU lawyers and was produced by Kerry herself.

Front and center: Breonna Taylor covers the September issue of O, The Oprah Magazine in an image by 24-year-old digital artist Alexis Franklin 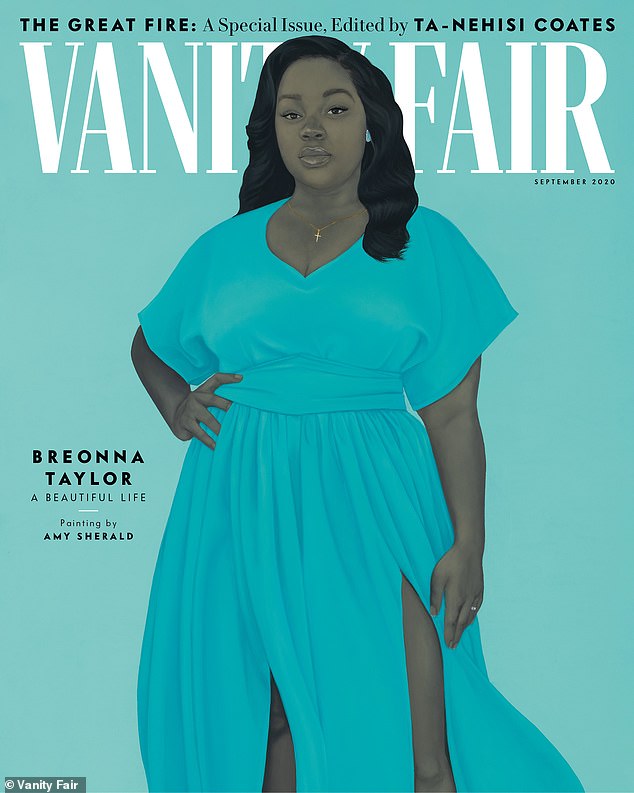 Meanwhile, for the first time ever, Oprah Winfrey does not appear on the cover of O, The Oprah Magazine.

Instead, the 66-year-old mogul has stepped aside to give the spot to Breonna Taylor, the 26-year-old woman who was killed by plainclothes police officers who stormed into her Louisville home in the middle of the night with a no-knock warrant on March 13.

In her editor’s letter, Oprah said that she and her magazine staff gave Breonna the September cover in an effort to ‘use whatever megaphone we have to cry for justice.’

‘What I know for sure: We can’t be silent. We have to use whatever megaphone we have to cry for justice. And that is why Breonna Taylor is on the cover of O magazine,’ Oprah wrote in her What I Know For Sure column.

And Vanity Fair’s September issue features a stunning blue portrait of Breonna  by the artist who painted Michelle Obama for the National Portrait Gallery.

Artist Amy Sherald’s 2018 portrait of the former First Lady became instantly iconic, but the 46-year-old painter says that her Vanity Fair cover is a contribution to the ‘moment and to activism — producing this image keeps Breonna alive forever.’

The magazine was guest edited this month by author Ta-Nehisi Coates.