In Los Angeles this week, Volkswagen revealed a new addition to its line of electric concept vehicles, which is both futuristic and practical.

Called ID Space Vizzion, the new vehicle is a family-focused station wagon based on the sporty ID Vizzion sedan the company announced in 2018.

The ID Space Vizzion is technically a concept car, but Volkswagen is moving forward with a plan to release the car in 2022.

Volkswagen plans to sell 22 million electric vehicles over the next ten years.

The ID Space Vizzion hasn’t undergone Environmental Protection Agency testing yet, so some of its specs may change, but Volkswagen is currently targeting a 300 mile range powered by an 82kWh battery, according to Jalopnik.

The car will have a 275 horsepower engine capable of going 0-to-60mph in five seconds, and will have a maximum speed of 109mph.

Volkswagen says it’s also considering a second model of the station wagon with a more powerful 355 horsepower engine, but the company won’t say for certain whether this model would see a public release.

The focus of the ID Space Vizzion isn’t speed, however, its family functionality.

The most flashy feature is the inclusion of two electric longboards that will come mounted into the roomy rear luggage compartment. 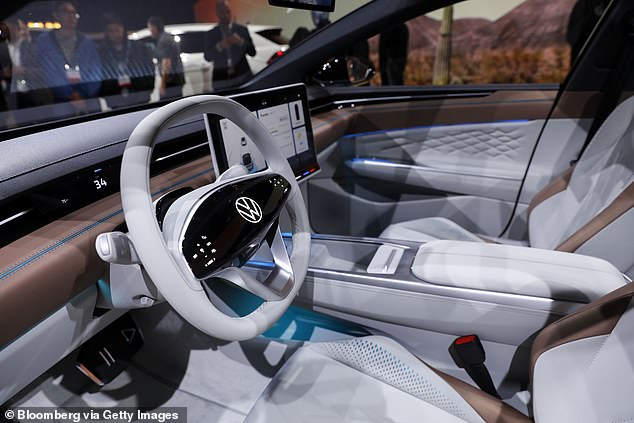 The ID Space Vizzion interior is made from ‘AppleSkin,’ a material that’s created with waste matter from the apple juice making process 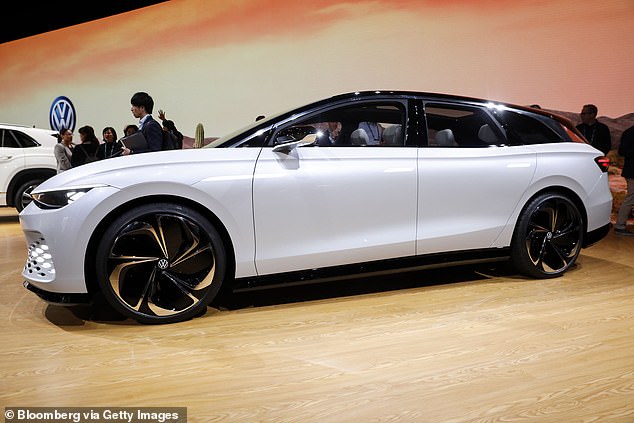 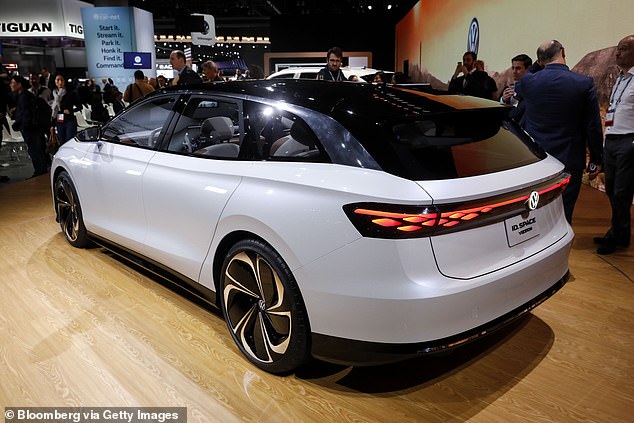 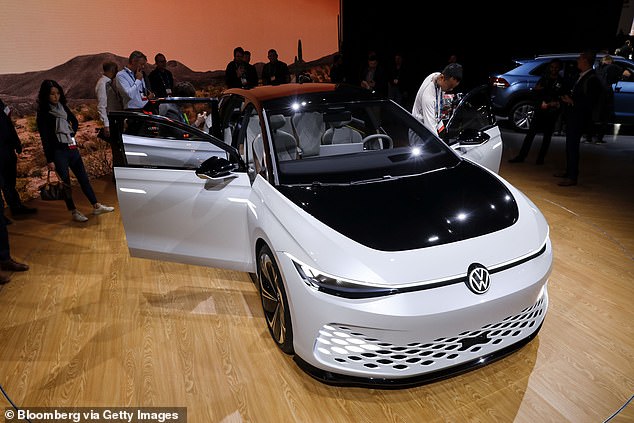 The car interior will be made from a wholesome and environmentally friendly material called ‘AppleSkin,’ created using matter left over after the production of apple juice.

The interior cabin will also be illuminated by long glowing strips of blue light.

In place of mechanical handles, the doors will have illuminated touch surfaces on that light up when the proximity sensor from the car key is nearby.

The engineers have also developed a sleek silhouette for the car shell, with a minimum amount of air drag that’s comparable to that of a Porsche Taycan.

WHAT IS THE VOLKSWAGEN ID SPACE VIZZION?

The ID Space Vizzion is Volkswagen’s latest electric car, a station wagon version of the ID Vizzion sedan the company announced in 2018.

The ID Space Vizzion is targeted for a 2022 release and will come with a 300-mile range on a single battery charge and a 275 horsepower engine.

The car’s doors don’t have traditional handles but instead an illuminated touch surface that opens the door when touched, presuming a wireless car key is nearby.

The interior upholstery if made from ‘AppleSkin’ a new kind of material made from material left over during the production of apple juice.