Ukrainian President Volodymyr Zelensky said on Sunday that he is ready to sit down with Russian leader Vladimir Putin to try and end Moscow’s brutal invasion — adding that a failure to negotiate peace could result in World War III.

‘I’m ready for negotiations with him. I was ready for the last two years. And I think that without negotiations we cannot end this war,’ Zelensky told CNN’s Fareed Zakaria.

Kyiv’s wartime leader said he is prepared to meet Putin in whatever format it takes to get the autocrat face-to-face on the same day the United Nations announced more than 900 civilians have been killed since the attack began.

He also blasted Putin’s claims that he’s seeking to ‘de-nazify’ Ukraine, instead comparing the Russian leader’s treatment of the port city of Mariupol to how German troops sieged Leningrad during the second World War.

‘If there’s just 1 percent chance for us to stop this war, I think that we need to take this chance. We need to do that. I can tell you about the result of this negotiations — in any case, we are losing people on a daily basis, innocent people on the ground,’ Zelensky said.

He acknowledged his country’s historic resistance effort against Russian forces, who believed Ukraine’s major cities would collapse to Moscow’s forces within a matter of days.

Kyiv’s wartime leader said he was ready to meet Putin in whatever format it took to get the autocrat face-to-face.

‘Russian forces have come to exterminate us, to kill us. And we can demonstrate that the dignity of our people and our army that we are able to deal a powerful blow, we are able to strike back. But, unfortunately, our dignity is not going to preserve the lives,’ Zelensky said.

‘I think that we have to use any format, any chance in order to have a possibility of negotiating, possibility of talking to Putin. But if these attempts fail, that would mean that this is a third World War.’

It comes as roughly 10 million people have been forced to flee their homes in Ukraine, the United Nations said on Sunday.

There are also growing calls to try Putin and his forces for war crimes. Ukrainian officials have said that more of their civilians have perished amid Russia’s invasion than members of its military.

Officials in Mariupol, a city in southeastern Ukraine that has been besieged by Russian forces for weeks, have said that residents are being rounded up, taken to ‘camps’ and forcibly transported across Ukraine’s border.

Ukrainians there have been under near-constant shelling by Kremlin troops, as well as being cut off from running water, food lines and and electricity. A United Nations official said ‘uncollected corpses lie on city streets’ because people are afraid to risk their lives to recover the dead. 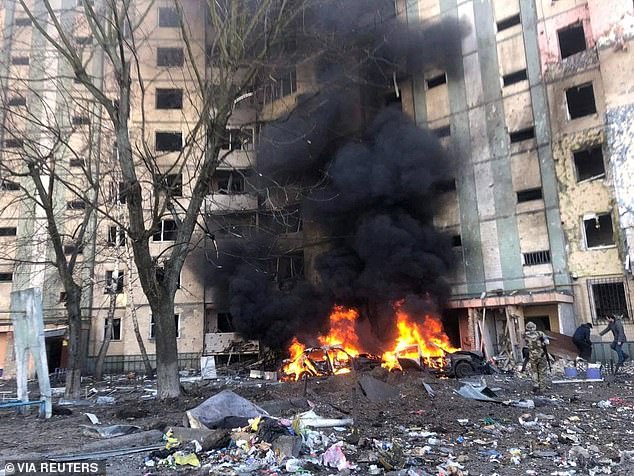 Smoke rises from burning vehicles outside a residential building that has been damaged by an airstrike, as Russia’s attack on Ukraine continues, in Kyiv, Ukraine, in this picture released March 20

On Sunday Zelensky refuted Putin’s claims he’s seeking to remove ‘nazis’ from power in Kyiv– instead turning the allegation against Moscow’s strongman himself.

‘What we are having now in Mariupol, they had in Leningrad. Everybody knows how many people died in the blockade of Leningrad,’ Zelensky said.

He was referring to the Germany Nazis’ brutal military blockade of the Soviet city, which ended in a bloody battle with heavy casualties on both sides.

‘These people died because they did not have enough food and water,’ Zelensky said. ‘So who is the Nazi?’

Putin’s apparent frustration in his lack of progress on the battlefield can be seen in increasingly brutal attacks on Ukrainian civilians.

A maternity hospital, a local theater that was being used as a bomb shelter and multiple humanitarian corridors have all been targets of Russian attacks.

Last week it was reported that Moscow’s soldiers gunned down 10 civilians, including an American citizen, who were waiting in a bread line in the northern Ukrainian city of Chernihiv.