Coronavirus vaccines might leave us laid up for a day with headaches, fevers, sore muscles, shivering chills and no energy, participants in trials for Moderna’s and Pfizer’s shots told CNBC.

But the side effects will be worth it, and fade after a day, they added.

Vaccines of all kinds commonly come with side effects – some more unpleasant than others.

Luke Hutchinsons, 44, was prepared for that possibility after signing up to help test whether Moderna’s shot worked, safely.

He felt a bit less than 100 percent for a few days after the first dose but eight hours after his second dose on September 15, the healthy computational biologist was too weak to leave bed, running a high fever and writhing with pain and shivers.

It even got harder for Hutchinson to breathe. The experimental COVID-19 vaccine left him feeling like he’d contracted the virus it was meant to protect him against.

He wasn’t the only one. CNBC spoke to two other participants in the Moderna trial and two enrolled in Pfizer’s vaccine trial, all of whom reported intense – but thankfully brief – side effects.

In addition to their side effects, the vaccine testers share the opinion that most people should still get a COVID-19 vaccine, once one has been approved.

Luke Hutchinson, 44, volunteered to participate in Moderna’s coronavirus vaccine trial. After his second dose of the shot, he developed a fever, aches that left him bedridden for the day and with chills so bad he cracked a tooth while shaking. He told CNBC he wishes he’d had warning, but thinks  the shot’s protection is worth the discomfort. 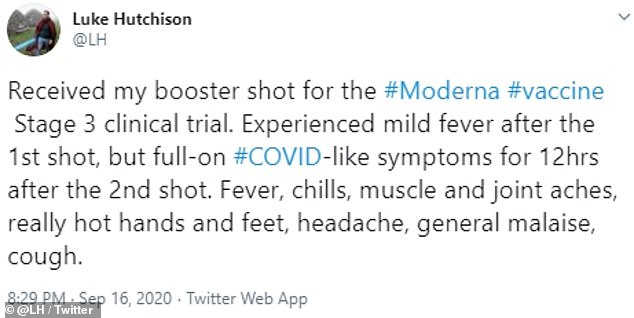 His first shot left Hutchinson with just mild side effects, but he compared his symptoms to ‘full-on COVID’ after the second shot

They also have some advice for the vaccine makers: warn people what they are in for after getting their shots.

‘If this proves to work, people are going to have to toughen up,’ another Moderna trial participant told CNBC.

‘The first dose is no big deal. And then the second dose will definitely put you down for the day for sure….You will need to take a day off after the second dose,’ added the North Carolina woman, who is in her 50s.

Some Excedrin carried her through the worst of her side effects.

She also spoke to other participants via Facebook that described arm pain similar to what’s expected after a tetanus shot.

Hutchinson described feeling like he had a ‘goose egg’ on his shoulder at the site of the second injection.

He shivered so violently through the tormented night after the shot that he cracked one of his teeth.

But 12 hours later, it all stopped. His temperature returned to normal, the aches and pains subsided. He was his energetic self again. 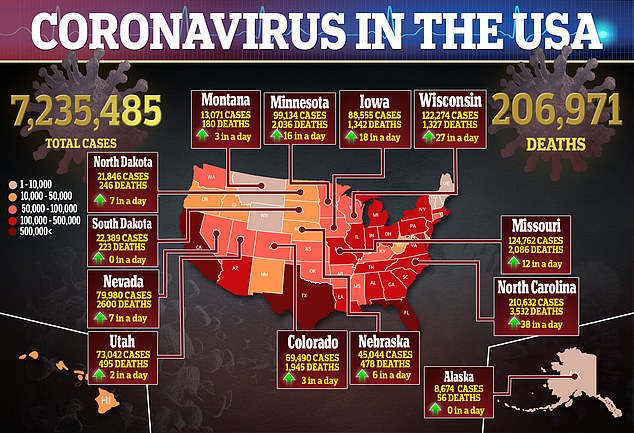 A Maryland participant in Moderna’s trial in his 20s spent a similarly unpleasant night wrestling with a fever and chills after his second dose.

He called Moderna, which responded quickly to tell him to report the symptoms via an app.

‘I wasn’t sure if I needed to go to the hospital or not because 104 is pretty high,’ he told CNBC.

‘But other than that, it’s been fine.’

The participants in the Pfizer trial did not elaborate on their experiences, but had similar symptoms, according to CNBC.

So far, data from Moderna’s and Pfizer’s vaccine trials have suggested they do trigger the production of antibodies against coronavirus, and are safe.

According to their published studies on the shots, volunteers who develop side effects are the minority, and the side effects they do develop are mild,or moderate.

They describe similar symptoms to those reported by the volunteers, but without first-hand details, the side effects sound on paper much less noticeable than they do when recounted by people who went through them.

But other trial participants – including older ones – have also come forward saying they have had no side effects. 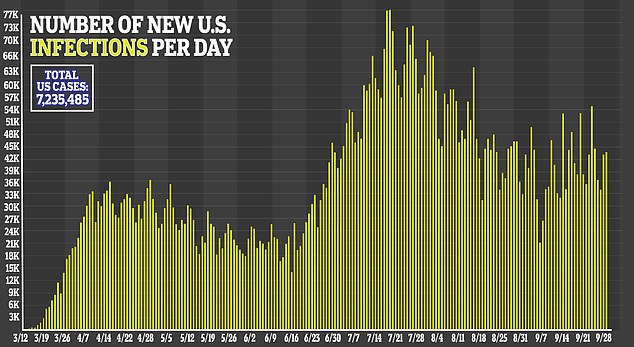 Two doses of the shot were given to each of about 40 volunteers, ages 56 to 70 and older.

All of the patients enrolled to the the study developed ‘neutralizing’ antibodies to coronavirus – the kinds of immune cells thought to be most capable of shutting down the virus and stopping it from infecting our cells.

About 80 percent of people who have died of coronavirus are older, making the safety of any vaccines against COVID-19 in aging populations paramount.

The ‘severe’ side effects included loss of appetite, fatigue that lasted days, and a high fever – which is particularly dangerous in older people.

With the election just over a month away, and President Trump promoting the possibility of a vaccine being given emergency approval by the Food and Drug Administration (FDA), concerns are rising over the safety of COVID-19 shots.

Companies and public health experts are on high alert after AstraZeneca’s trial was paused after a participant developed a dangerous spinal cord problem after getting the shot.

Now, as the trials near their ends, the scientists conducting them, people participating in them, and officials examining the data from the tests are walking a fine line between being careful to ensure the safety of a shot, and to ensure that people will take it.

‘If it gets approved, I still think a lot of people should get the vaccine,’ said a participant in Pfizer’s trial.

‘And I hope that all the side effects are made clear upfront.’