Lindsey Vonn came to South Korea with the goal of taking home an Olympic medal and leaving behind something even more special.

The American ski great, 33, said Thursday she recently scattered some of the ashes of her grandfather, who served during the Korean War, on a rock near the mountain where the downhill races were run.

‘I know that it would mean a lot to him to be back here, a part of him is in South Korea always,’ said Vonn, who shared her story with The Associated Press and the Chosun Ilbo newspaper.

Lindsey Vonn, 33, said Thursday she recently scattered some of the ashes of her grandfather near the mountain where the downhill races were run (both pictured during an NBC interview) 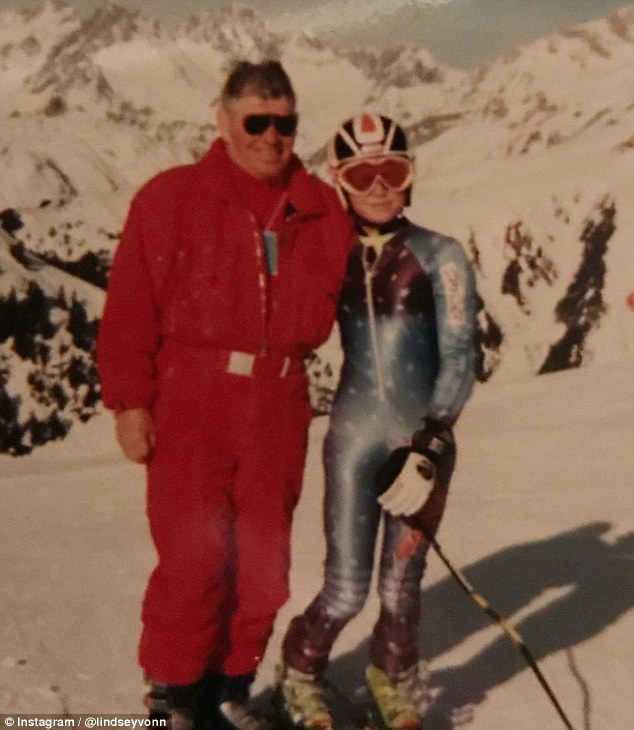 Vonn had been skiing in honor of her grandfather, who taught her how to ski, while in PeyongChang, and had his initials written in the side of her helmet

Vonn added that she sprayed parts of Don Kildow’s ashes ‘just a few days ago’ on a rock that she was told was special when she visited South Korea last year to be named a Pyeongchang Olympic ambassador.

She described the location as ‘right by the men’s downhill start.’

Vonn had been skiing in honor of her grandfather while in PeyongChang, and had his initials written in the side of her helmet.

She burst into tears when she was asked about her grandfather during a news conference in Pyeongchang this month before the Olympics. He lived in Milton, Wisconsin, and died in November.

‘I miss him so much,’ she said. ‘He’s been such a big part of my life. And I really had hoped that he would be alive to see me (at this year’s Olympics). But I know he’s watching, and I know that he’s going to help me and I’m going to win for him.’

The skier has always been open about her special relationship with her grandfather, who was a competitive ski jumper and the man who first taught her how to ski. 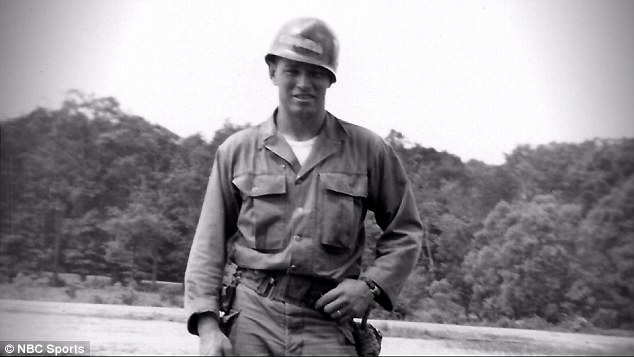 Don Kildow, who died in November, served two years in South Korea in the Army Corps of Engineers in areas near Jeongseon, one of the three Olympic venues 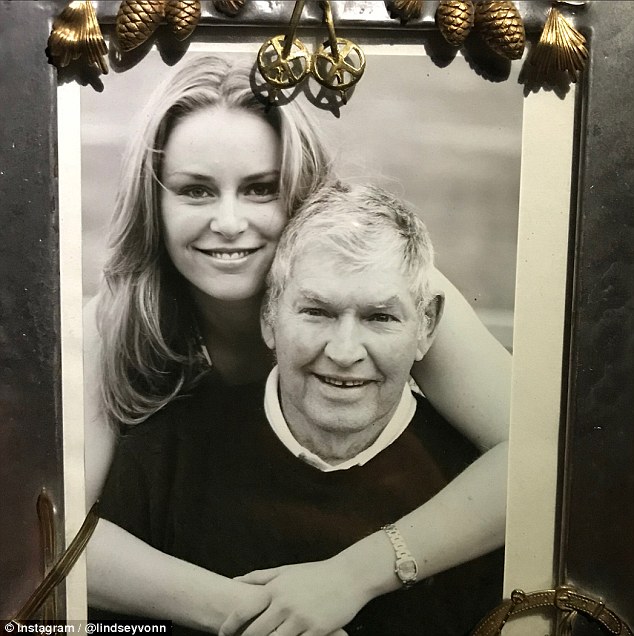 ‘I know that it would mean a lot to him to be back here, a part of him is in South Korea always,’ said Vonn (pictured with her grandfather)

In an interview with NBC, Don talked about what he felt when he watched his granddaughter ski.

‘My heart doesn’t stop,’ he said. ‘The pictures, they’re all on file. Someday she’ll want them,’

Vonn won a bronze medal in the downhill , but skied out of Thursday’s slalom leg of the Alpine combined in what was likely her last Olympic race. Later in the day, a group of elderly South Korean men gave her family some gifts and a letter of thanks to mark her grandfather’s service during the 1950-53 Korean War.

‘To be able to race for him in these Olympics was very special for me. And I tried everything I could to win for him,’ Vonn said. ‘I got a bronze, which, you know, to me was very special. And I think he would be proud of that.’

In their letter of appreciation, the South Korean men said they expressed their thanks for what they call her grandfather’s contribution for the freedom of South Korea. They also gave her traditional Korean fashion accessories and gloves. 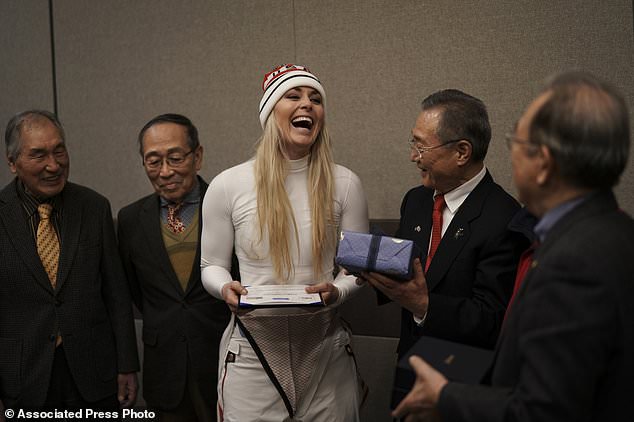 Lindsey Vonn, center, smiles as she receives gifts and a letter of appreciation for her grandfather’s service during the Korean War from members of the Yongsan Club 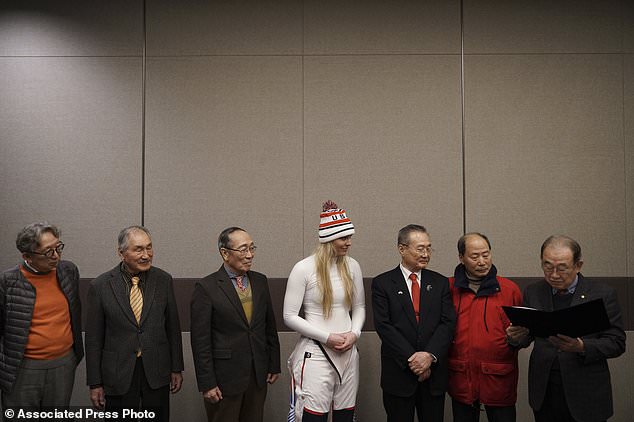 Kildow served two years in South Korea in the Army Corps of Engineers in areas near Jeongseon, one of the three Olympic venues. He never had a chance to return to South Korea, but he had talked about the country in a ‘very favorable’ way, according to his son, Alan Kildow, who attended Thursday’s event with his two other daughters.

Alan broke into tears while talking about his father’s memories of South Korea during the war. He said he separately scattered parts of his father’s ashes in the country.

After the Olympics, Vonn plans to go home to get ready for the World Cup finals. She said she’s ‘enjoying the last remaining days of the Olympics’ with her family.

One day after making history as the oldest alpine skier to ever win an Olympic medal, she appeared on Today to speak about competing in what she had said were her last Winter Games , and revealed her days as an Olympian may not be over for good.

If she did return, she would be 37 while competing in the 2022 Games, which will be held in Beijing.

No matter what happens, Vonn has said she would like to win six more titles to beat the current record of 86, held by Swedish skier Jan Ingemar Stenmark. 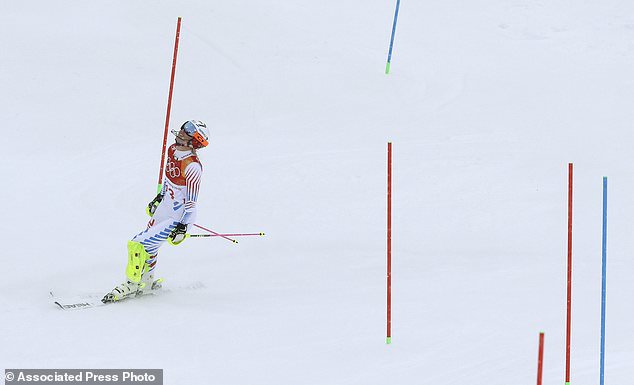 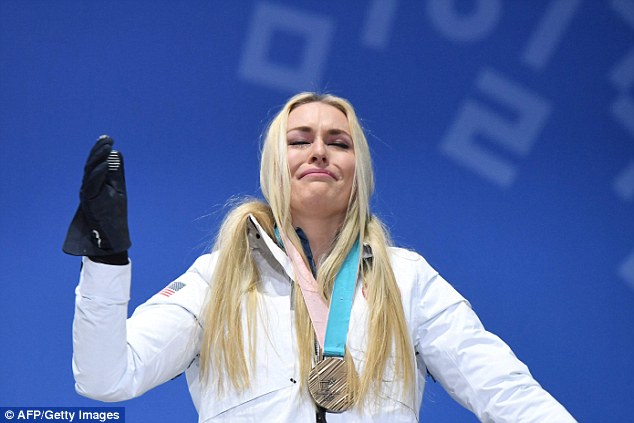 ‘I mean who knows what will happen in four years, it’s a long time from now. But I’m going to soak it in as if it were my last,’ said Vonn.

‘Maybe it’s not. Maybe it will be, but I’ve given it my best shot and I’ve enjoyed it thoroughly.’

Vonn was just 17 when she first competed in the Olympics, appearing at the 2002 Games in Salt Lake City.

This was her fourth Olympics, having been forced to miss the Sochi Games in 2014 due to injury.

She had won two medals previously, taking home a gold in the downhill and bronze in the super-G at the 2010 Vancouver Games.

‘This has definitely been the most amazing experience for me in all of my Olympic experiences because of how amazing the team has been,’ Vonn said on Today.