A voyeur who took a secret video of a 12-year-old girl at a leisure centre has been ordered to pay his victim £1,500 compensation – but avoided jail.

Pervert Gerard Thomas spied on the child at Nottingham’s Rushcliffe Arena but she looked down and spotted the mobile phone through a gap in the cubicle.

The girl then noted a rucksack and trainers before staff were alerted.

This helped them to identify Thomas, 49, Nottingham Magistrates’ Court heard.

Gerard Thomas took a secret video of a 12-year-old girl at a leisure centre has been ordered to pay his victim £1,500 compensation – but avoided jail at Nottingham Magistrates’ Court

She later told police: ‘Ever since it happened, I have not wanted to go swimming and neither have my family.

‘I was very confident before and this has gone down since this happened. It makes me feel sad and embarrassed.

‘On the day, I felt so shocked and confused. I hope he is punished for what he has done.’

A 32-week prison term, suspended for two years, was imposed on Thomas, of West Bridgford, Nottinghamshire.

He must pay £115 government tax and £85 prosecution costs.

Referring to the compensation, District Judge Tim Devas said: ‘Although there are no physical injuries, there is mental scarring which will go on for some time. The amount reflects the impact.

‘You are a hitherto respectable gentleman who has done something unbelievably stupid that has had very unfortunate consequences for the victim.

‘On a community order, you will have 20 activity days with probation to consider your thoughts and behaviour in a sexual context. For a man of your intelligence and character, that would be sufficient to ensure this never happens again.’ 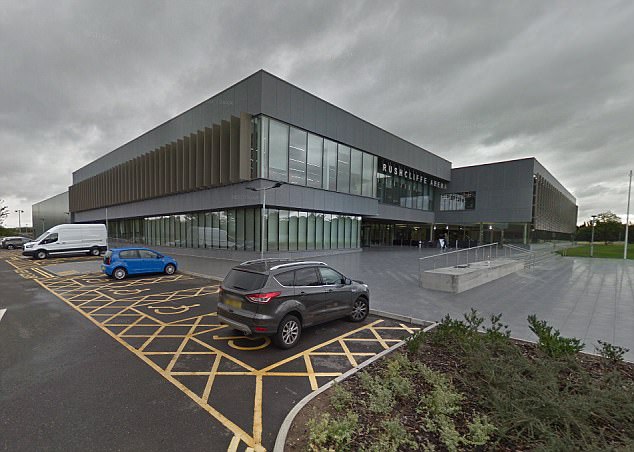 For the next five years, he must not enter swimming pools, gyms, leisure facilities and public changing facilities while carrying a mobile phone or recording equipment. He must have no unsupervised contact with any girl under 16.

Sanjay Jerath, prosecuting, said the incident took place on October 17 when two children were present with their grandmother.

The girl saw ‘a mobile phone through a gap in the cubicle. She also noticed a rucksack and trainers’. Arena staff were alerted and kept and eye on Thomas.

Mr Jerath told the court: ‘Police attended and spoke to the defendant who initially stated that he did not have a phone. He then said he was using it to look for a sock he had dropped.

‘The phone was forensically examined and they recovered from it from October 17 an indecent video of a child.

‘He was arrested and said the phone must have inadvertently started recording while trying to recover some socks.’

James Buckley, mitigating, told the court: ‘He said he was minded to view the image but not upload it or download it. It was basically voyeurism with the camera.’

A probation report said that the ‘likelihood of Mr Thomas committing further offences like this is negligible,’ the court was told.