Volkswagen has unveiled its new all-electric family sports crossover the ID Space Vizzion – and explained why it really is the apple of the German car firm’s eye.

That’s because it replaces leather and plastic with a man-made fabric and substance made from waste apple skins and cores left over from the production of apple juice.

It described the battery-powered five-door car, given its world premiere at the Los Angeles Motor Show today, as a ‘preview’ of the future production version for Europe and North America due in just over a year’s time.

Vizzion of the future: This is the latest electric car previewed by Volkswagen. Called the ID Space Vizzion, it’s equivalent in size to an existing Passat Estate 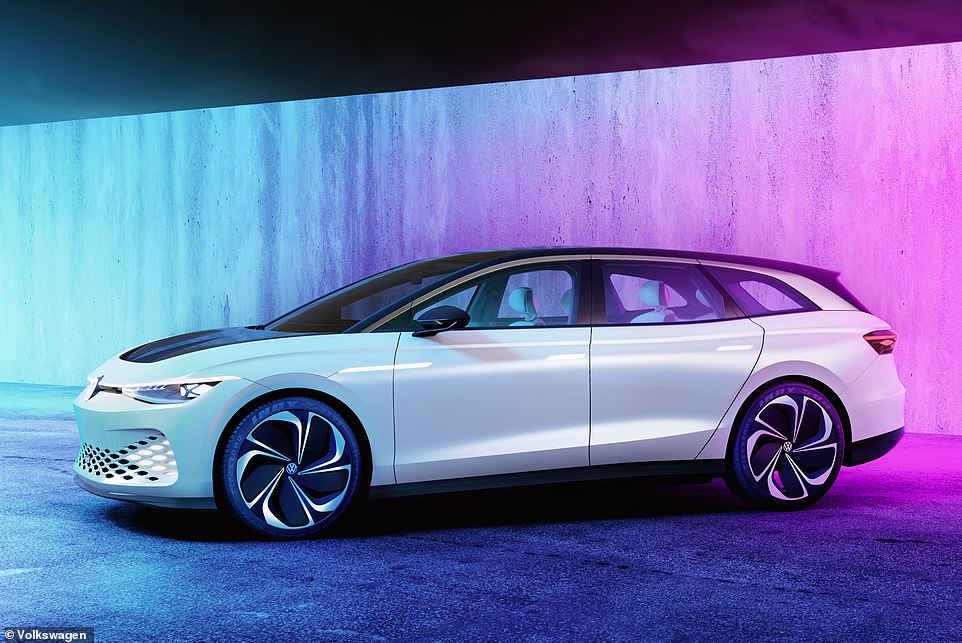 This is only a concept car for now, but Volkswagen has promised that a production version will be on sale in the UK in 2021

Bosses said the sleek estate, which can be specified as a four- or a five-seater, combines the aerodynamics of a grand tourer with the proportions of an SUV.

While the version shown at Los Angeles is a prototype, VW said the production-ready model will be in showrooms in 2021.

Described by VW as a zero emissions vehicle for a new era, it will be available in rear-wheel drive with one electric motor, or all-wheel drive spec with an additional electric power source at the front axle.

The new ID Space Vizzion will also come in a choice of variants to sit alongside petrol and diesel versions of the Volkswagen Passat saloon and estate, said VW.

Running on 22-inch wheels, the rear-wheel drive version is powered by a 205 kilowatt electric motor, which translated to 279 horsepower driving the rear wheels. 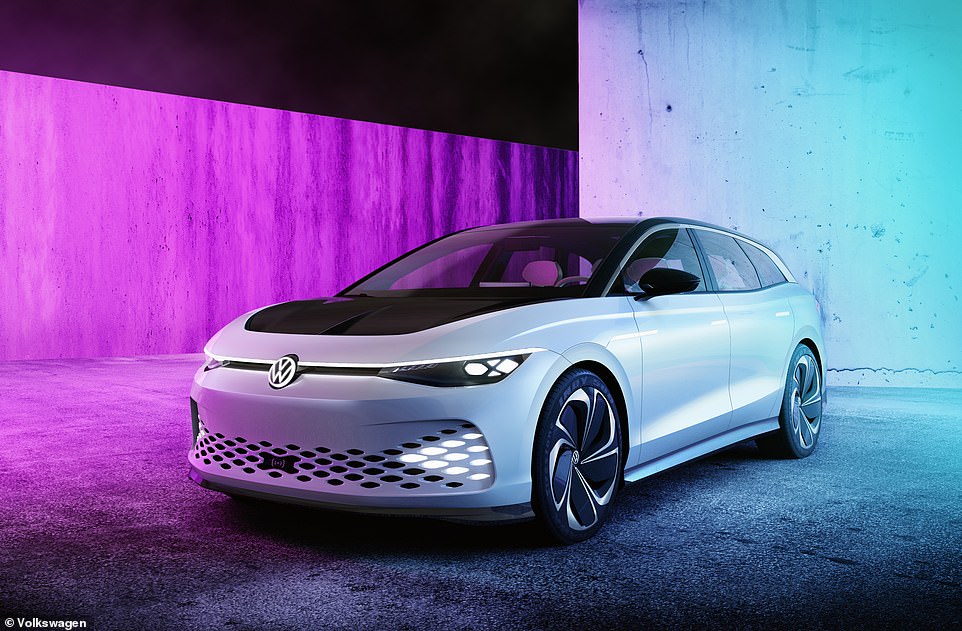 Bosses said the sleek estate, which can be specified as a four- or a five-seater, combines the aerodynamics of a grand tourer with the proportions of an SUV 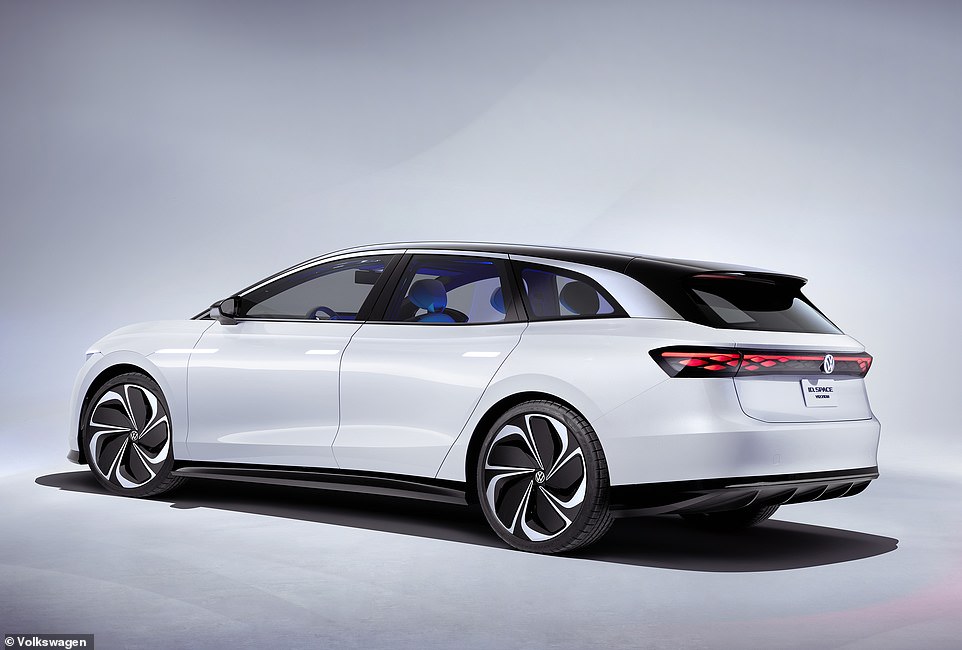 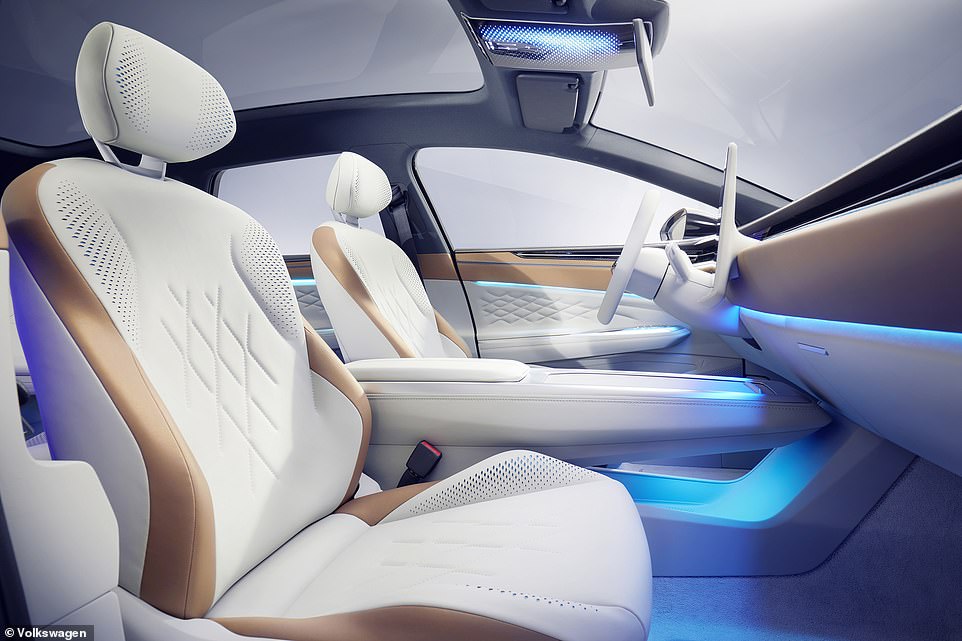 The interior is suitably concept-car-like, with a minimalist dashboard, lots of screens and a raft of eco-friendly cabin materials

VW ID Space Vizzion: Will it fit in my garage? 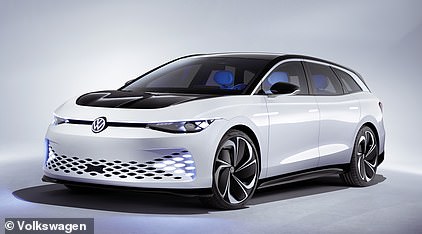 Charging time: up to 80 per cent in about 30 minutes

The all-wheel drive version get an additional electric motor (75kW/102 horsepower) at the front driving the those wheels.

The combination of both motors on this 4MOTION all-wheel drive setup (allowing for some energy ‘leakage’) creates a combined power of 340 horsepower (250KW).

Power comes from 82kWh lithium-ion batteries which can be charged up to 80 per cent capacity in about 30 minutes using a fast-charger, says Volkswagen.

The electric drive components are extremely compact and the battery is integrated into the vehicle floor to save space, similar to the concept used in the ID.3 hatchback and employed by Tesla in recent years.

A saloon and estate version will be on the market from 2021, the German manufacturer claimed.

The new ID Space Vizzion is the seventh car so far-previewed in Volkswagen’s new ID range, introduced in the wake of its dieselgate scandal of emissions cheating, as the German car giant has sought to visibly and practically clean up its act with a new generation of zero and low-emission cars with a view to the firm being carbon neutral across all global markets by 2050.

VW said it will ‘combine the aerodynamic properties of a Gran Turismo with the spacious proportions of an SUV’.

As well as being fantastically proportioned it also debuts some novel twists.

This includes dispensing with a traditional automatic gear knob in the centre console as a thing of the past, moving the functionality to a switch on the right hand side of the steering wheel.

It also features plenty of reused cabin materials and absolutely no leather whatsoever.

‘Ecological’ replacements will be a selection of plant-based leatherette called ’AppleSkin’ that is used on the seats, door-trim, dials, and centre console arm-rests.

Volkswagen says it ‘feels as comfortable as leather without actually being made of leather’. 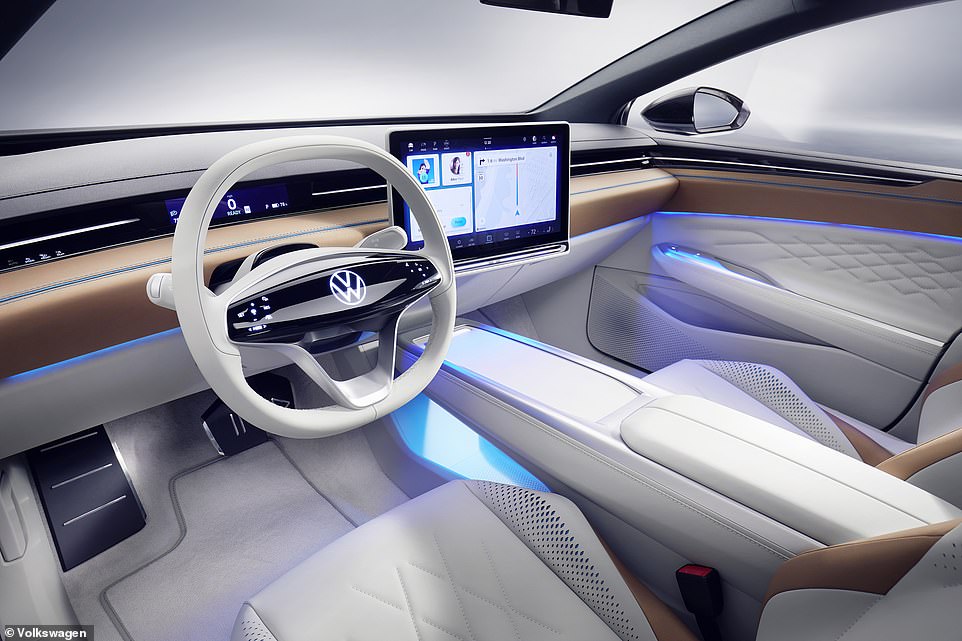 Death-knell for the gear knob: As you can see from this image, the automatic gear shifter is no longer in the centre console, instead being shifted to the steering wheel controls 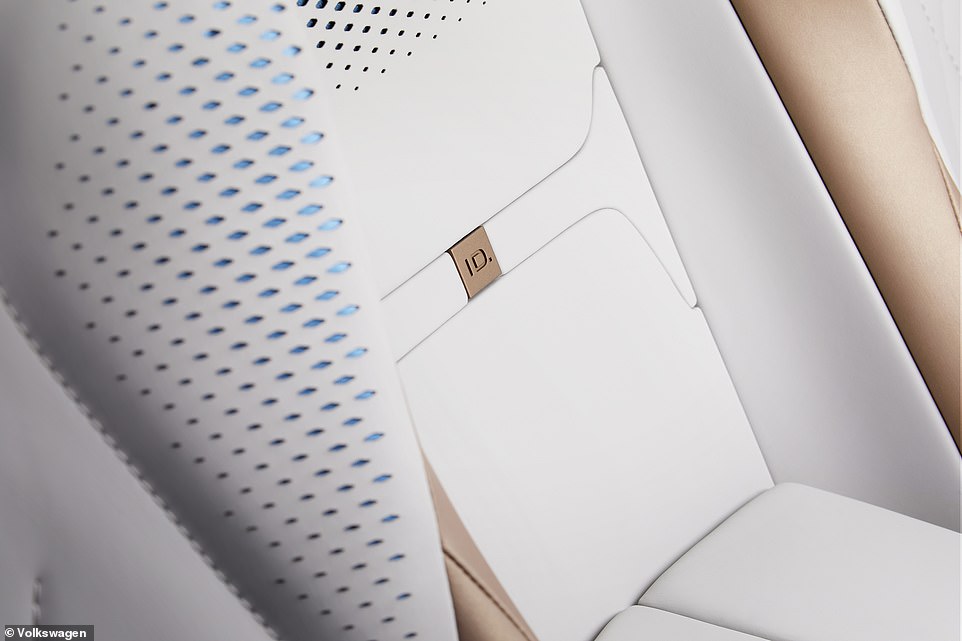 The cabin features no leather whatsoever. VW will replace it with a man-made fabric and substance made from waste apple skins and cores left over from the production of apple juice 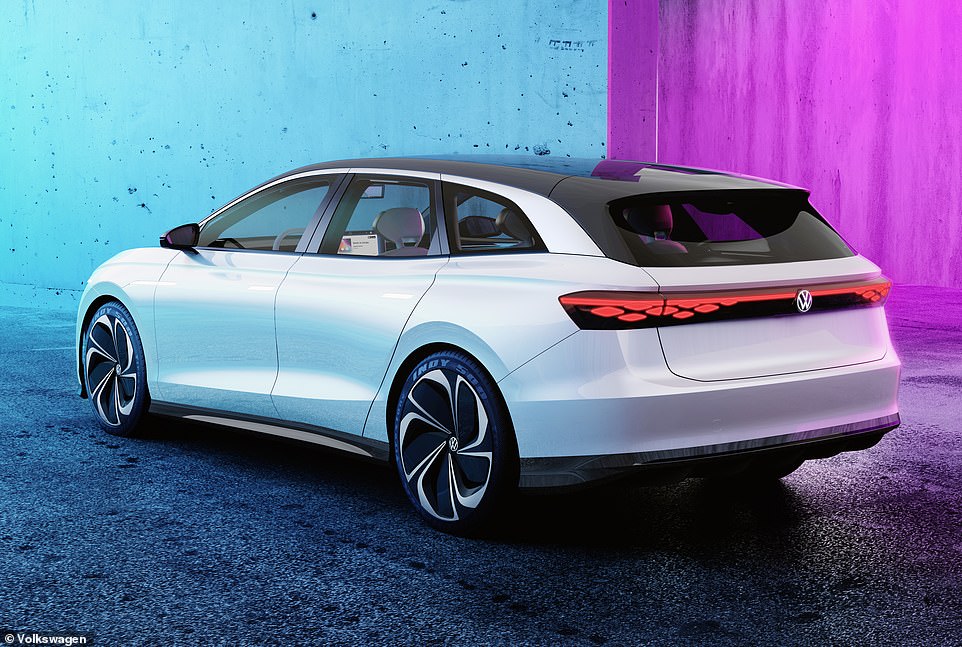 As the name suggests, a VW ID Space should be practical too, with a generous 586-litre luggage compartment

Like the brand’s new Golf hatchback revealed a matter of weeks ago, the interior will be dominated by screen and touch panels, including some of the steering wheel along with the automatic gear knob.

It added: ‘All information, entertainment, comfort and online functions and vehicle settings are also grouped together on a 15.6-inch touchscreen which appears to hover in mid-air.’ 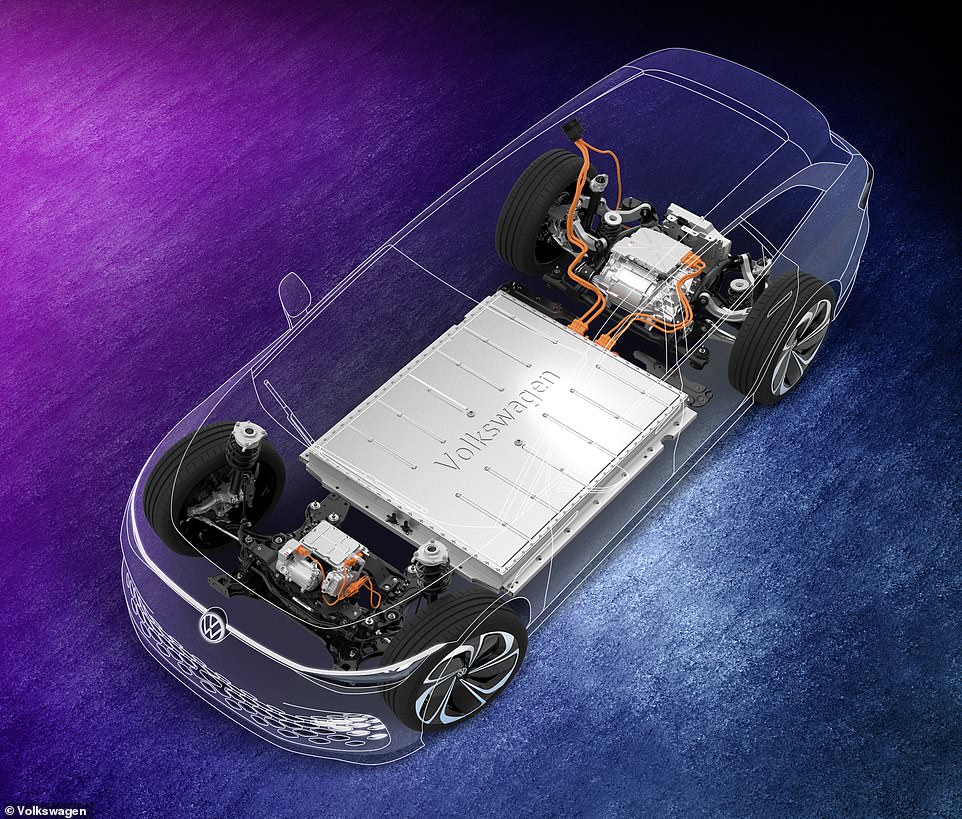 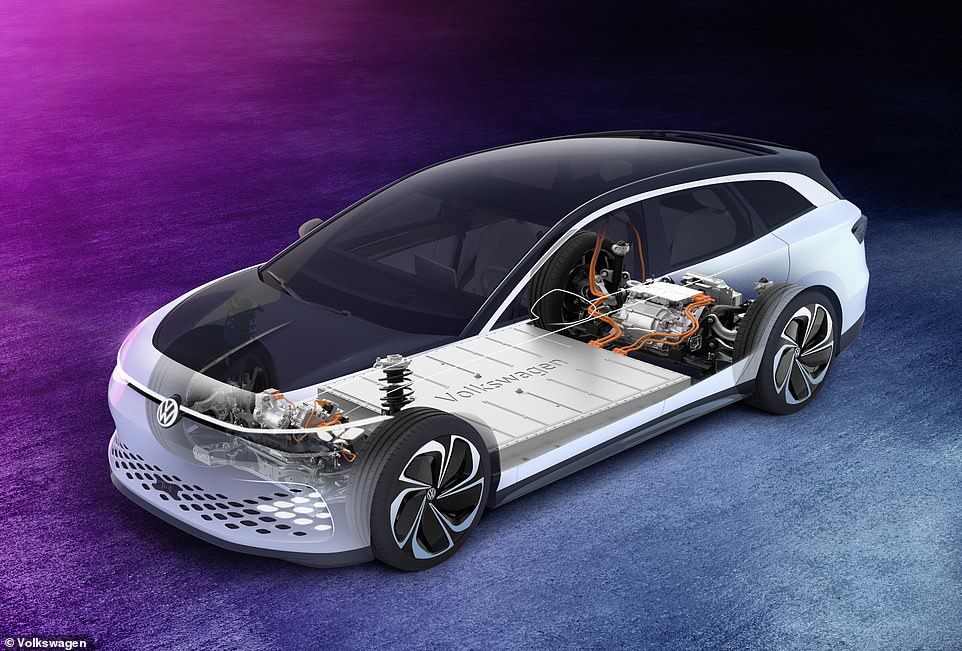 As standard, it will come with just one electric motor powering the back wheels. However, customers can upgrade to all-wheel-drive, which gets a smaller front-axle electric power plant as an addition

At nearly five metres long (4,958mm) and featuring an enormous panoramic sunroof, the new ID Space Vizzion has a light, airy and spacious interior – boosted by the fact it doesn’t have a combustion engine and therefore more flexibility in the design.

It should be practical too, with a generous 586-litre luggage compartment.

And in a nod to California’s surf culture – particularly in the Los Angeles’ ocean-side resorts of Malibu and Santa Monica – the show car includes two electric longboards stored in the boot parcel shelf which drivers can street surf the last mile or so to their destination after parking up. 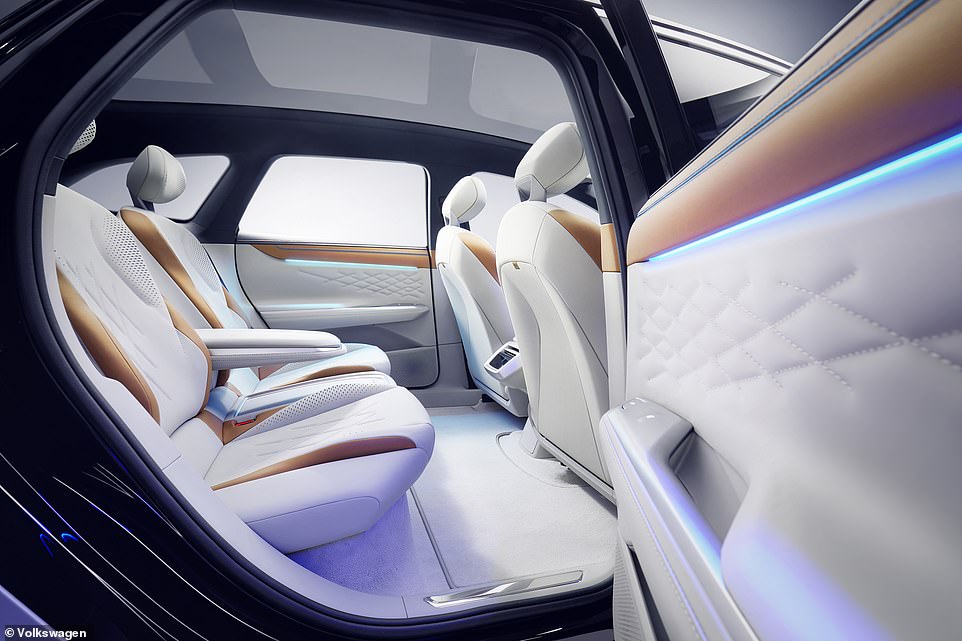 As you can see from this image, the rear offers ample leg- and head-room for back-seat passengers and feels light and airy thanks to a roof-spanning panoramic window 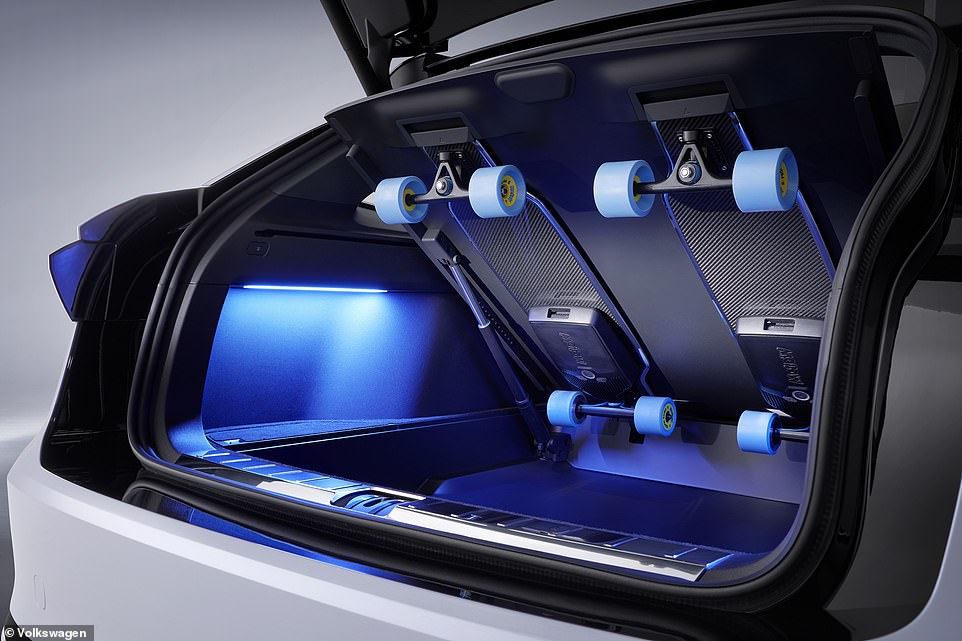 In a nod to Californian culture, the concept car comes with two electric longboards stored in the boot parcel shelf which drivers can street surf the last mile or so to their destination after parking up 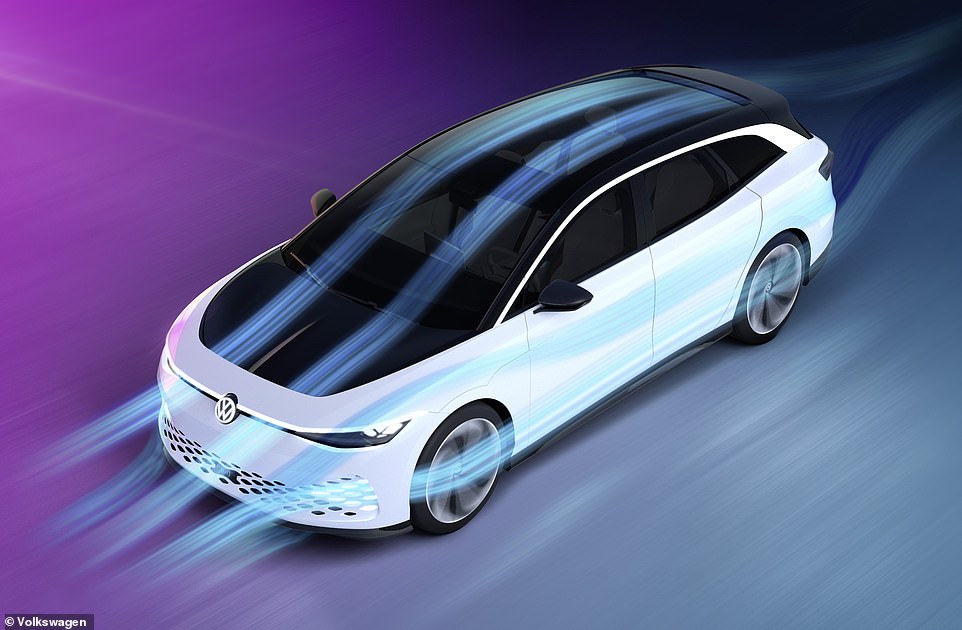